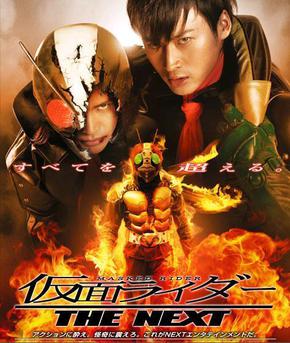 Two years after the events of Kamen Rider the First, a strange series of bizarre murders occur with the victims mutilated in a most gruesome fashion while pop star Chiharu’s “Platinum Smile” is being played, becoming an urban legend. Meanwhile, Takeshi Hongo has become a high school science teacher with a troublesome class with one student catching his attention; a troubled girl named Kotomi Kikuma who was best friends with Chiharu and is worried about her. By the time Hongo and her find a dying “Chiharu”, they learn she’s actually an imposter as the Shocker Inhumanoid Chainsaw Lizard arrives with the six Shocker Riders to carry out the task of executing Hongo, forcing him to reveal himself in as Kamen Rider 1 to Kotomi before escaping his hunters. At around the same time, Hayato Ichimonji is shown still alive but slowly weakening due to his body’s rejection of the cybernetic changes which made him Kamen Rider 2.

The next day, after saving Kotomi from some punks by exposing his physical ability, Hongo accepts Kotomi’s offer to help in finding Chiharu by finding her older brother Shiro Kazami, who is the former president of the rising IT enterprise ExaStream, which is tied to the mysterious disappearance of its staff two months prior. Making their way to his holiday home to meet Kazami, Hongo and Kotomi soon learn that he is in league with Shocker as Chainsaw Lizard and the Shocker Riders battle Kamen Rider Ichigo on as Kazami joins the fray as a Shocker Inhumanoid code-named “V3”. After chasing down Rider 1 in a high speed chase across the countryside, V3 and the Shocker Riders take down Rider 1 until Kamen Rider Nigo re-appears to cover Rider 1’s escape. But after realizing his “sister” was another imposter, Kazami reveals the incident at ExaStream was a Shocker experiment of Nanobots designed to convert all humans in Japan into cyborgs, with him being a survivor of the experiment. The three riders later learn that Kotomi found the other girl, revealing the gruesome fate the real Chiharu suffered as she and her predecessor were involved, horrifying Kazami as Kotomi is telepathically shown the truth of the real Chiharu’s final moments as “Chiharu” runs off and eventually is brutally murdered with the manager and the record dealer who were covering up her death as Kotomi uses Platinum Smile to communicate with Chiharu, learning that she’s still alive as the “ghost” takes its leave.

After Kazami reveals to Hongo that Shocker’s foreign branch brought a shipment of nanobots to spread them across the nation, Rider 1 arrives to intercept the convoy while battling Scissors Jaguar, the mastermind behind the nanobot operation, with Rider 2 arriving to back him up as the battle ends up in the “Legend of Gathering” restaurant in an all out fight for the nanobots. Though the Double Riders are overwhelmed, the tables are turned as V3 arrives to support them. While the Double Riders kill Scissors Jaguar, V3 manages to destroy Chainsaw Lizard and the nanobots before coming face to face with Chiharu, horrifically mutated by the nanobots into a monster as she pleas her brother to put her out of her misery. Though reluctant to do it, Kazami kills Chiharu, honoring her wish to die rather than live as a monster. With Chiharu’s death, the Platinum Smile incidents end. After the three Riders escape the burning restaurant, Ichimonji takes his leave to spend his final moments in bliss at a Ginza bar he regulars, while Kazami decides to start a new life for himself. Hongo is forced to quit his job after complaints made for his earlier stunt. The film ends with Kotomi and Hongo walking home together. A post-credits scene reveals that the curse of Platinum Smile may not have truly ended.