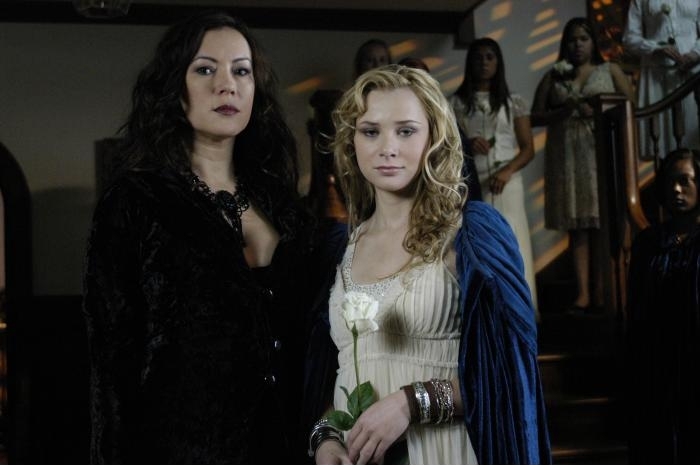 Twin sisters Sarah (Mika Boorem) and Lindsay (Summer Glau) are excited to attend Temple Hill University, where they will likely join Alpha Nu as their mother Trina Goodwin (Morgan Fairchild) was a previous member. Sarah finds herself immediately drawn to Finn, a student adviser that invites them both to Pi Epsilon Delta’s rush week party. At the party the sisters are introduced to the Alpha Nu President, Corrine (Joanna Garcia), but Sarah ends up leaving the party in tears after accidentally spilling a drink on Corrine. Lindsay follows Sarah and accidentally breaks her ankle. They’re brought into the Pi Epsilon Delta house, where Dr. Eugenia Hunter (Jennifer Tilly) introduces herself as a friend of their mother. The sisters are surprised to find that Lindsay’s ankle has been healed. The following day Corrine ingratiates herself to Lindsay during a meeting at Alpha Nu, during which time Corrine takes the opportunity to take an eyelash off of Lindsay and pocket it.

Sarah is approached by Dr. Hunter, who tells Sarah that they both possess magical powers. This unnerves Sarah, especially after Dr. Hunter later tells her that the Pi Epsilon Deltas and the Alpha Nus are mortal enemies locked in a fight of good against evil, and that Sarah is the One- a person who could disrupt the balance. Sarah is further warned that as the One, the Alpha Nu wants to sacrifice her to the Eternal Flame with the Knife of Truth in exchange for immortality. Sarah tries to approach her sister with this, who angrily tells her that Sarah has always been the focus of attention as opposed to Lindsay herself and Lindsay ends up leaving in tears. After Corrine’s vice-president Esme (Tessa Thompson) informs her of the fight, Corrine uses this to persuade Lindsay into joining the sorority in return for beauty and a chance to outshine her sister – an offer Lindsay eagerly accepts.

Things grow more tense after Lindsay is forced to stay in the Pi Epsilon Delta following a fire and after making up with Finn, Sarah discovers that Trina Goodwin is not her true mother and that Trina actually killed their birth mother after a failed ritual. The Alpha Nus had believed her to be the One, which had been proven to be false after the Knife of Truth refused to cut her, as it will only cut the flesh of the One. Sarah also learns that the Alpha Nus are willing to kill her if they can’t have her, which prompts her to try to rescue her sister from their clutches. She initially seems to be successful, as Lindsay appears to want to leave the group, but this is soon revealed to be a trap to capture Sarah and force her into sacrificing herself willingly. However everyone is shocked when a struggle reveals that the true One is actually Lindsay rather than Sarah, as the Knife of Truth ends up nicking her throat. They also find that the Knife can cut through anything if it has the blood of the One on it.

Corrine immediately imprisons Lindsay in preparation for her initiation into the sorority and kills Trina Goodwin, as she is no longer of any use to Corrine. Sarah escapes with Finn and the two end up having sex in order to keep him from being sacrificed in a ceremony where the Alpha Nus will throw virgins into their Eternal Flame to keep it burning. Sarah and Lindsay are both initiated into their respective houses (Sarah into Pi Epsilon Delta, Lindsay into Alpha Nu) and Lindsay is horrified when she discovers that the Alpha Nus are intent on sacrificing her. While the Deltas cast a shielding spell to trap the most of the Alpha Nu’s inside the house, Sarah manages to successfully rescue her sister, almost dying in the process, and after a struggle pushes Corrine into the Eternal Flame. After they return to the Pi Epsilon Delta house, Dr. Hunter uses Lindsay’s inner power to heal her and returns the Knife of Truth to its resting place, while Sarah leads the Deltas into the night to find and destroy the remaining Alpha Nu’s. The film ends with a voiceover from Esme saying “That the trouble with fire. You never know when it’s going to flare up again.” as she walks off into the distance with the remains of the Eternal Flame in a small cauldron.

Each version of the film is reflective of the era in which it was made, so I can’t denounce this one for being so different from the Kay Lenz version. Unfortunately, the remake had the potential to be so much better, if only it were made for theaters instead of television. It certainly has its moments and its charms, so take it for what it is: a derivative made for TV horror movie aimed at teenage girls. 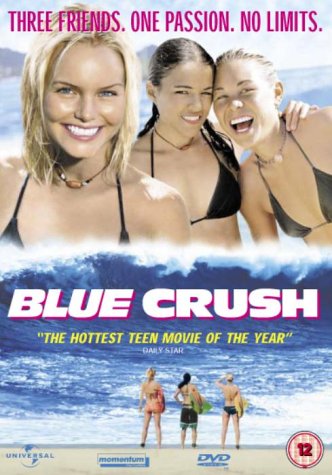 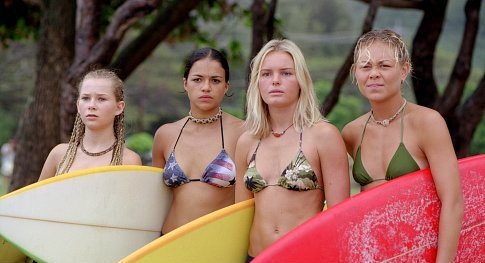 Anne Marie (Kate Bosworth), Eden (Michelle Rodriguez) and Lena (Sanoe Lake) are best friends. They raised Anne Marie’s 14-year-old sister, Penny (Mika Boorem), ever since their mother took off to Las Vegas with a boyfriend who was uncomfortable with the idea of having the two girls come along. While Penny is at school, Anne Marie, Eden and Lena work as maids at a large resort hotel, but more importantly, they are surfers. Anne Marie rises every morning before dawn to train for her surfing comeback, and was once considered a rising star in women’s surfing and competed as a youth, but an extreme wipeout and near-drowning incident temporarily halted her career, and left her with deep-seated fears. Her friends, especially Eden, have encouraged her to try it again. 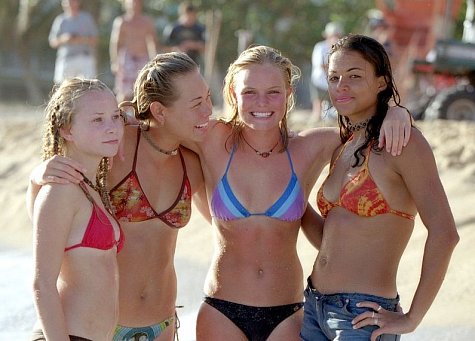 Anne Marie has been invited to join in an upcoming surf competition at the famed North Shore surf spot, Pipeline. She hopes to gain the attention of sponsors and get herself and her friends out of the near-poverty they are living in. As the Pipeline competition gets closer, she struggles to keep Penny under control and deal with her own personal issues. 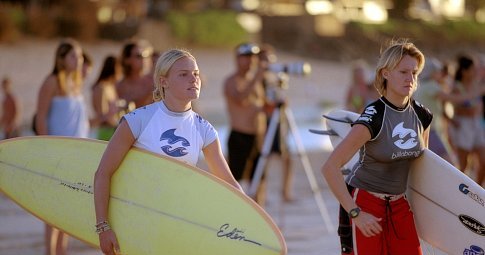 At work, Anne Marie meets and catches the eye of Matt Tollman (Matthew Davis), a National Football League quarterback in Hawaii for the Pro Bowl (it is hinted that he plays for the Minnesota Vikings). Matt is there with several of his rowdy teammates and instantly becomes attracted to the surfer. Through a series of “chance” encounters, she agrees to teach him how to surf for $150 per hour, and brings Lena, Eden and Penny along for the ride. When she goes to Matt’s hotel room to get the money, they kiss as a call comes and Anne suspects that it is his wife but he promises it is his niece. Later they sleep together. Her acceptance of a non-local begins to cause friction between her and many of the young men in her surfing social circle. Anne Marie faces more problems when she and Eden argue about Anne Marie’s lack of dedication to training for the Pipeline contest due to the sudden appearance of Matt. She also has to hear demeaning comments from several of the other football players’ wives and girlfriends staying at the hotel about how she is undergoing the “Matt Tollman makeover” while attending a luau at the resort. 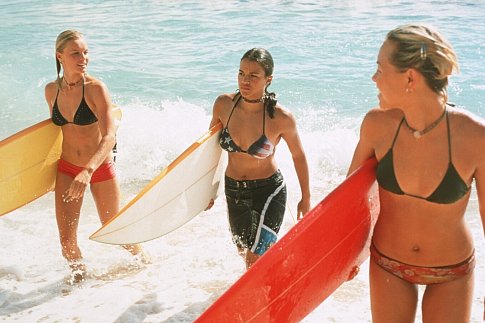 Anne Marie confronts Matt about their situation and soon resolves to step up her game, as she finally commits herself to the Pipeline Masters. On the day of Pipeline, Anne Marie wipes out during her first heat, but advances to the next heat after narrowly beating pro surfer Kate Skarratt. She is shaken, but Matt tells her a story about his first game as an NFL quarterback and helps her regain her wavering confidence. Determined, but still afraid, Anne Marie returns to the water. Competing in the same heat is Keala Kennelly, one of the first professional female surfers, playing herself. While Keala surfs the first few sets of waves without wipe-outs, Anne Marie still has inhibitions about riding one, visions of another near-drowning incident holding her back. Keala finishes her turn, then paddles out and takes Anne Marie under her wing and encourages her to take the best wave of the day, on which Anne Marie manages to score perfectly. Although she does not advance to the next heat, she has regained her lost confidence, but also attracted the notice of sponsors, one of which includes an offer to join the Billabong women’s surf team. 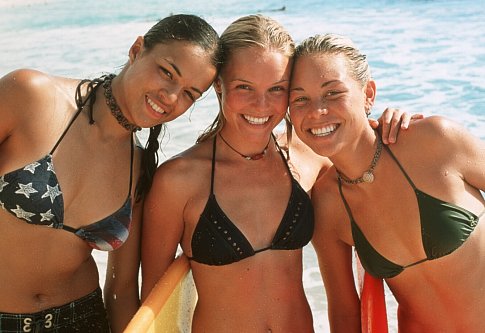 This movie has a simple plot line that is executed perfectly. Blue Crush is a straight forward, no BS kind of movie that is short, sweet and to the point and it has just enough surfing action to gage your interest.. The actresses/actors do a great job of conveying the sincerity of their characters, and their situation is very believable. 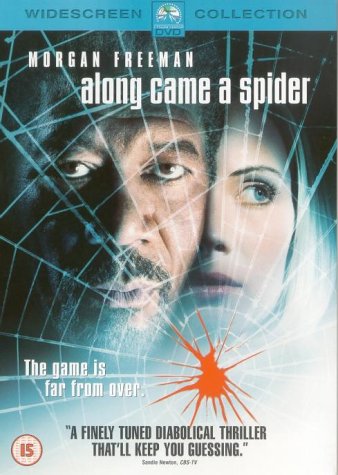 After Washington, D.C. detective, forensic psychologist and author Alex Cross (Morgan Freeman) loses control of a sting operation, resulting in the death of his partner, he opts to retire from the force. He finds himself drawn back to police work when Megan Rose (Mika Boorem), the daughter of a United States senator, is kidnapped from her exclusive private school by computer science teacher Gary Soneji (Michael Wincott). U.S. Secret Service Special Agent Jezzie Flannigan (Monica Potter), held responsible for the breach in security, joins forces with Cross to find the missing girl. Soneji contacts Cross by phone and alerts him to the fact one of Megan’s sneakers is in the detective’s mailbox, proving he’s the kidnapper. Cross deduces the man is obsessed with the 1932 Charles A. Lindbergh Jr. kidnapping and hopes to become as infamous as Bruno Hauptmann by committing a new “Crime of the Century” which might be discussed by Cross in one of his true crime books. Megan’s kidnapping proves to be only part of Soneji’s real plan: to kidnap Dimitri Starodubov (Anton Yelchin), the son of the Russian president, guaranteeing himself greater infamy.
After Cross and Flannigan foil his second kidnapping plot, a supposed call from the kidnapper demands Cross deliver a ransom of $10 million in diamonds by following an intricate maze of calls made to public phone booths scattered throughout the city. Cross ultimately tosses the gems out the window of a rapidly moving Metro train to a figure standing by the tracks. When Soneji later arrives at Flannigan’s home and confronts Cross after disabling Flannigan with a taser, the detective realizes the kidnapper is unaware of the ransom demand and delivery. Soneji tries to leave with Flannigan but Cross kills him. Cross becomes suspicious and realizes someone discovered Soneji long before his plot came to fruition. After searching Flannigan’s home computer, he finds enough evidence to prove Flannigan and her fellow Secret Service agent, Ben Devine (Billy Burke), used Soneji as a pawn in their own plot. He tracks them down to a secluded farmhouse where Flannigan has murdered Devine and is now intent on eliminating Megan Rose. Cross saves Megan and shoots Flannigan in the heart, killing her. Afterwards, Cross takes Megan back to her parents.Along came a spider is a film that you will not forget in a hurry. It’s packed with suspense, action and superb acting, with Morgan Freeman truely showing just why he is one of the greats.