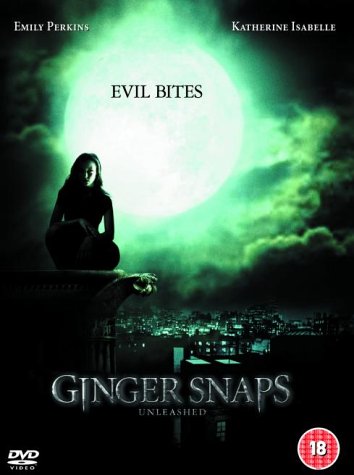 After the events of the first film, Brigitte Fitzgerald uses monkshood extract to fight the effects of the lycanthropy that transformed her sister into a werewolf. Brigitte shaves her body, cuts her arm with a scalpel, and logs the data about her healing ability. Ginger, her dead sister, appears as an apparition and warns her that monkshood is only a treatment, not a cure. After Brigitte injects a second dose of monkshood, she senses the presence of a male werewolf that has been stalking her. She quickly packs and open the door, only to find Jeremy, a flirtatious librarian who has brought to her several books she attempted to check out earlier. The second injection causes toxic shock, and Jeremy attempts to bring her to the hospital; however, the male werewolf mauls him to death. Brigitte stumbles down the street and collapses in the snow.

Brigitte wakes in a rehab clinic, from which she unsuccessfully attempts to escape. She pleads to be released, but the clinic’s director Alice refuses. However, Brigitte palms a piece of glass to measure her healing rate. Tyler, a worker at the clinic, offers to trade monkshood for sexual favors, which she declines. As her healing rate accelerates, so does her rate of transformation. Ginger continues to appear, taunting Brigitte as she experiences growing cravings for sex and murder, as did Ginger previously. During a group therapy session, Brigitte fantasizes about being instructed to lie on the floor and masturbate; a vision of Ginger jolts her back to reality, and her palm is revealed to be covered in hair. Later, depressed, she holds the shard of glass to her throat in front of a mirror, but she does not kill herself.

While at the clinic, a girl named Ghost – the granddaughter of Barbara, a severe burn victim at the hospital – shadows Brigitte and realizes her secret. Ghost slips Brigitte a werewolf comic book and begins to question her about lycanthropy. When Ghost notices that Brigitte’s ears have become pointed, Brigitte cuts off the tips. Ghost attempts to slip Brigitte more monkshood, but Tyler prevents it. In despair at her rate of transformation, Brigitte allows Tyler to inject her. After the male werewolf tracks Brigitte to the clinic, she and Ghost plan their escape. They crawl through air vents to reach the basement, where they encounter Beth-Ann, an addict who traded sex for drugs. The male werewolf kills and drags away Beth-Ann, and Brigitte is wounded after she burns the beast in a crematorium; however, her wounds heal almost instantly.

Ghost drives them to Barbara’s house and explains that Barbara fell asleep with her bedtime cigarette. After they sleep and Brigitte eats a hunted deer, they arrange a meeting at a gas station with Tyler to procure more monkshood. When Brigitte wanders in the gas station, she discovers the attendant has been slain. Tyler arrives and when they return Barbara’s house, Brigitte’s body rejects the monkshood. Worried, Tyler calls Alice. Ghost tricks Brigitte into thinking that Tyler abused her, and Brigitte locks Tyler outside, where the werewolf kills him. Alice arrives, and Ghost attacks her with Barbara’s hunting rifle. When Brigitte realizes that Barbara is not a smoker, she aggressively pins Ghost against the wall and argues with her; she realizes that Tyler did not abuse Ghost, and Ghost herself burnt Barbara. Alice attempts to take Ghost with her, but retreats to the attic once the werewolf breaks in through a window. Brigitte, whose transformation is almost complete, lures the werewolf into a room. Brigitte stabs him while Ghost distracts the werewolf. The werewolf bites Brigitte, and, as they struggle, they both fall into the basement, where the werewolf is impaled on a trapped mattress. Ghost hits Alice with a hammer, and a weakened Brigitte begs Ghost to kill her before the transformation completes. Instead, Ghost locks her in the basement and illustrates a comic book that depicts herself as a powerful warrior with a werewolf pet. Ghost narrates that Brigitte is getting stronger and is waiting to be unleashed on her enemies. As the film ends, Ghost prepares to welcome Barbara home.

This is a tremendous horror sequel which has little in common with the first film; in fact it’s a whole different beast. For most of it’s running time ‘unleashed’ is barely recognisable as a werewolf movie in the traditional sense; instead we get something altogether darker and more intimate. A deliciously twisted fairy tale.