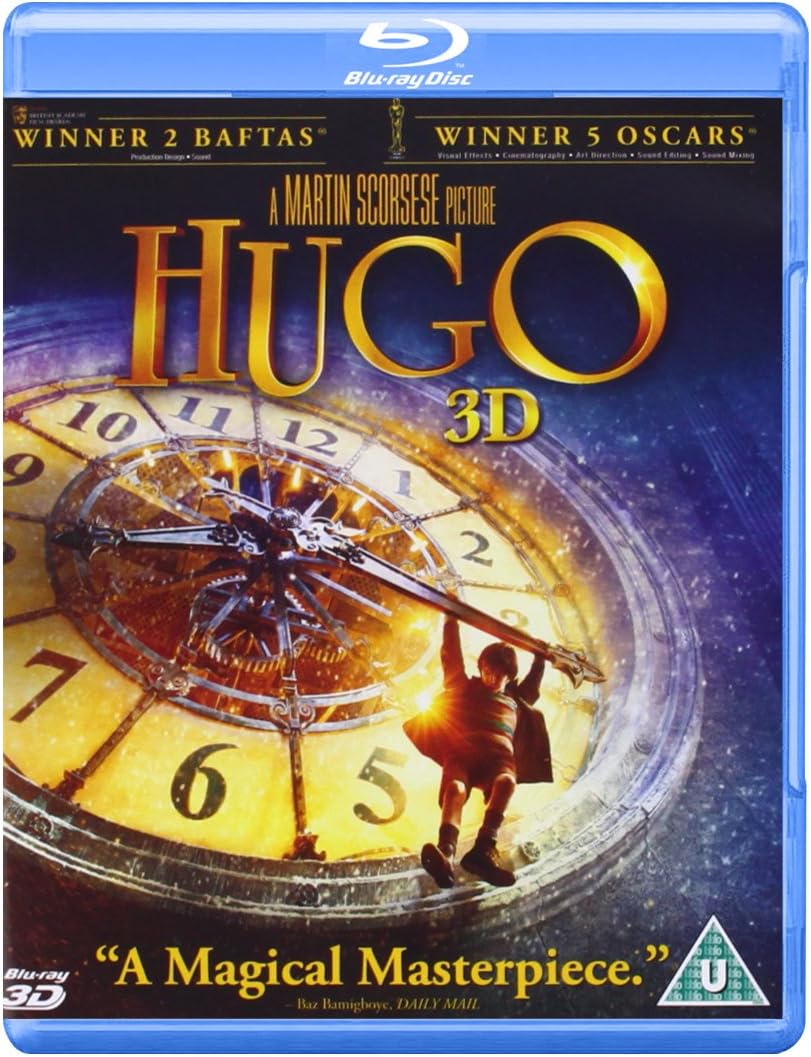 In 1931, 12-year-old Hugo Cabret (Asa Butterfield) lives in Paris with his father (Jude Law), a widowed, but kind clockmaker who also works at a museum. One day his father finds a broken automaton, a mechanical man designed to write with a pen, at the museum, and he and Hugo try to repair it, his father documenting the automaton in a notebook. When his father is killed by a fire at the museum, Hugo is forced to live with his resentful, alcoholic uncle Claude (Ray Winstone), and made to learn how to maintain the clocks at the railway station of Gare Montparnasse. When Claude goes missing for several days, Hugo continues to maintain the clocks, fearing that he would be sent away as an orphan by the vindictive Station Inspector Gustave (Sacha Baron Cohen) if Claude’s absence is discovered. Hugo attempts to repair the automaton with stolen parts, believing it contains a message from his father, but the machine still requires a heart-shaped key that his father could not find.Hugo is caught when stealing from the toy store owner Georges (Ben Kingsley), who looks through his father’s notebook and threatens to destroy it. Hugo encounters Georges’ goddaughter Isabelle (Chloë Grace Moretz) who offers to help get the notebook back. Hugo learns Georges has forbidden Isabelle from going to the cinema, and introduces the medium to her as his father had done for him. As their friendship grows, he shows her the automaton, and is surprised when Isabelle inadvertently reveals she wears the key as a necklace given to her by Georges. When started, the machine draws out a scene that Hugo recognizes from his father’s description of the film A Trip to the Moon. Isabelle identifies the signature, that of a “Georges Méliès”, as her godfather. She sneaks Hugo into her home, where they find a hidden cache of more imaginative drawings of Méliès, but are caught by Georges, who banishes Hugo from his home.Hugo and Isabelle go to the Film Academy Library and find a book about the history of cinema that praises Méliès’ contributions. They meet the book’s author, René Tabard (Michael Stuhlbarg), a film expert who is surprised to hear that Méliès may still be alive, as he had disappeared after World War I along with nearly all copies of his films. Excited at the chance to meet him, René agrees to meet Isabelle and Hugo at Georges’ home to show his copy of A Trip to the Moon, hoping it will invigorate Georges. On the scheduled night, Georges’ wife Jeanne (Helen McCrory) tries to turn them away, but René compliments Jeanne as Jeanne d’Alcy, an actress in many of Méliès’ films, and she allows them to continue. As the film plays, Georges wakes up at the sight, and Jeanne finally convinces him to cherish his accomplishments rather than regret his lost dream. Georges recounts that as a stage magician, he had been fascinated by motion pictures and used the medium to create imaginative works through his Star Film Company, but was forced into bankruptcy following the War, closing his studio and selling his films to be turned into raw materials. He laments that even an automaton he made that he donated to a museum was lost. Hugo recognizes this is the same automaton he has, and races to the station to retrieve it. He is caught by Gustave, who has learned that Claude’s body was found some time ago, and threatens to take Hugo to the orphanage. Georges arrives and tells Gustave that he will now see to Hugo, adopting him as his son.Some time later, Georges is named a professor at the Film Academy, and is paid tribute through a showcase of his films recovered by René. Hugo joins in with his new family as they celebrate, while Isabelle starts to write down Hugo’s story.Martin Scorcese’s Hugo is one of the best cinematic experience, I’ve had in years.  The visual effects, cinematography, art direction, just technically superb. Finally a smart, awe-aspiring family film, which are really rare nowadays. A definite surprise coming from legendary director, Martin Scorcese, who’s known for movies with a lot of swears, violence, drugs and other adult-themed subjects.

John Holmes and Dawn Schiller
The underage girlfriend of John Holmes, Dawn Schiller, is on the streets and picked up by a holy roller after Holmes leaves Schiller in a hotel room. Schiller eventually calls Holmes to come and get her. Holmes arrives at the apartment, and they have sex and snort cocaine in the bathroom. The next morning, while in a motel room, Dawn sees a newscast that states four people were murdered at a rowhouse on Wonderland Avenue, the same one she had earlier been at with Holmes. The story eventually moves on to two city detectives investigating the crime, Sam Nico and Louis Cruz, and their contact with Holmes. Another officer, Billy Ward, intervenes in the investigation.
David Lind’s story

The next major character introduced is David Lind. He hears of his friends’ murders at Wonderland and soon discovers his girlfriend was there. While at the crime scene, he is picked up by Nico and Cruz. Through Lind’s story (told in flashbacks), we are introduced to some of the people who partied at Wonderland. These people, known as the Wonderland Gang, included Ron Launius and his wife Susan, Billy Deverell, Lind’s 22-year-old girlfriend Barbara Richardson, and Joy Miller. Ron has a fondness for antique guns and frequently shows them off. When he learns that Holmes knows notorious gangster Eddie Nash, he gives Holmes a pair of stolen antique guns to take to Nash, so that Nash can fence them and the Wonderland Gang can split the loot. (Nash had befriended Holmes because of Holmes’ notoriety as the porn film phenomenon Johnny Wadd.) Holmes takes the guns to Nash, but Nash says the guns are too rare to be sold, as they would be recognized right away and everyone involved would be apprehended. Rather than return the guns to Holmes, Nash keeps them for himself. Attempting to get back in the gang’s good graces, Holmes suggests robbing Nash’s home. Ron Launius is reluctant to go along with the robbery at first, but after Holmes gives him a rundown of what’s there, he is eager to participate. Holmes volunteers to draw them a map to plan the robbery, since he has visited Nash’s house frequently. Holmes then visits Nash to buy drugs, and on the way out leaves the kitchen door unlocked to give the Wonderland gang easy access.

The Robbery of Eddie Nash
The next morning, Ron Launius, Lind, and Deverell carry out the robbery, while wheel-man Tracy McCourt waits outside in a car, serving as lookout. Neither Holmes nor any of the women is present when the robbery occurs. The Wonderland Gang gains access through the unlocked kitchen door and robs Nash at gunpoint. Lind accidentally fires his gun, wounding Nash’s bodyguard, Greg Diles. The gang hurls racial epithets at Nash and Diles and walks away with over one million dollars in cash, jewels, and drugs. They bring their loot back to the Wonderland apartment to divide everything up. Holmes is unhappy with the cut he is given, even though he did not take part in the robbery and he’s in debt to the gang.

Nash discovers Holmes was involved in the robbery, he has Holmes beaten and finds Holmes’ little black book. He tells Holmes he will kill every person listed in the book, starting with Holmes’ mother, if Holmes does not give up the men who robbed Nash.

July 1, 1981
The retaliation for the robbery is swift and fatal. On July 1, 1981, a group of Nash’s henchmen (including Holmes), led by Diles, gains access to the apartment at Wonderland Avenue. Ron Launius, Deverell, Richardson, and Miller are all brutally beaten to death with striated lead pipes. Diles compels Holmes to deliver blows to Launius. Susan Launius is beaten but survives, and is questioned by Nico and Cruz in her hospital bed. She tells them (in a near comatose state) that she does not remember anything, only shadows. Lind is not present during the attacks