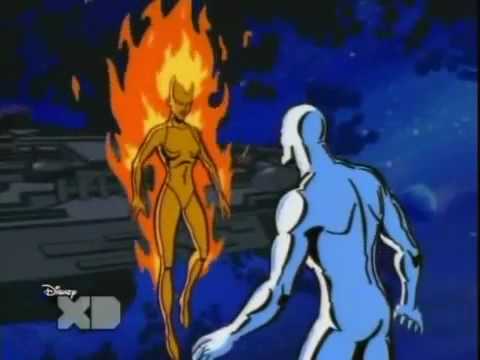 One of Marvel’s best ever in the animated arena. Yes, they only made one season and it ended on a cliff-hanger, but that had precious little to do with the series itself. Apparently it rated rather well. The problem was never with the show, but with the company that made it. Unfortunately that went belly-up.

For the purists, it is true that this show isn’t strictly in accordance with cannon. But then, what superhero cartoon is? Like most animated shows derived from comic books, this production re-imagines the universe on which it is based in accordance with its own needs. While it can’t match the sheer intricacy and detail of the comic book universe with its decades of backstory, it does make good use of the time and space available.

My only real issue with the show’s departures from cannon is that for some reason its creators decided to make Thanos a worshipper of Chaos rather than of Death. I’m not sure if the worship of Death was considered a bit too strong for what was at least nominally a children’s show, but from an adult perspective, I do consider that a mistake. That one issue aside, the story can hold its own when compared to Marvel’s comic book epics. I’ve always loved the way Marvel does cosmic, and this show does not disappoint. It positively explodes with all the electrifying energy, godlike power, and inhuman solemnity and portent that makes all of Marvel’s best cosmic epics what they are. When you’re watching this show, you do buy into the idea that these are indeed cosmic beings whose deeds shape and destroy worlds, thence echo throughout their universe, and even perhaps throughout other universes as well.

But where this show really excelled was on a visual level. Although the CGI may be technically a bit on the crude side by today’s standards (remember, this is a show made in the late 90’s), on an artistic level it is a triumph. The show’s creators did a magnificent job of integrating Jack Kirby’s original vision with the latest technology available at the time of the show’s creation. The integration isn’t as seamless as that to be found in more modern efforts, but then, it doesn’t try to be. The 2D and 3D artwork are at all times clearly distinguishable from one another, but the overall effect is still glorious.