As the start of “Phase Two” of Marvel’s ever-expanding film lore, Iron Man 3 picks up shortly after the events of The Avengers, where Tony Stark (RDJ) played a crucial role in stopping an other-worldly invasion in New York City. Shaken by the experience to a point of acute panic attacks, Stark finds himself obsessed with his mechanical tinkering, creating and modifying suits in the hours where he can’t sleep or spend time with Pepper Potts (Gwyneth Paltrow), now CEO of Stark Industries. During that time, a bearded fanatic known as The Mandarin (Ben Kingsley) claims responsibility for curiously evidence-free terrorist activities through hacked television broadcasts, backed up by cryptic “lessons” about American indulgence, artifice, and claim to territory. In a fragile state of mind and dealing with the reemergence of a momentary colleague from his past, Aldrich Killian (Guy Pearce), whose radical plans for human advancement (and his attractiveness) draw Pepper’s attention, Tony flexes his Iron Man muscle by publicly provoking The Mandarin.

Before that, Iron Man 3 offers a glimpse nearly fifteen years into the past as a quasi-preamble, before Stark made his reputation as a public hero. Outside of Black and co-writer Drew Pearce’s evident character reasons for doing so — namely introducing Killian at a younger age, as well as the beautiful, brilliant scientist Maya Hansen (played by Rebecca Hall) and her invaluable yet unstable work in organic regeneration — this also serves as a reminder of a Tony Stark before he stumbled into the duties of a narcissistic hero in a near-impervious suit of his design. Thus begins a personal journey for Stark: complete with voiceover directed at an unspecified listener (you find out who in the post-credit sequence) that transitions to the present era, the strain on his persona created by a near-death sacrificial decision in New York flirts with the comic-book’s famous “Demon in a Bottle” story arc … without ever mentioning alcohol.

The script from Black and Pearce expands on that internal crisis by finding a way to leave Stark without his gear, his girl, and his support structure at a pivotal point, where he’s abandoned in the middle of nowhere with only his wits and scientific knowledge (and a boy essentially embodying a young engineering-savvy version of Tony Stark) to guide him. Some will find this change of pace refreshing, a return to those moments in the Afghanistan cave where he constructed the first rudimentary suit; once again, he’s using only his inventiveness to weave in and out of tricky situations and get Iron Man in fighting shape. Others will find the lack of higher-octane action and similarities to other recent “fallen, morale-damaged hero” storylines frustrating, and that’s partially due to circumstances that are wobbly even for comic-book logic. The pressure rests on Downey Jr. to convince those watching of his fraught situation, and his charisma — now with the added touch of Shane Black’s humorous edge — keeps the attitude upbeat, hectic, and faintly mythic, bolstered by scenes such as Tony literally dragging the weight of his armor over his shoulder across a snowy field.

As  the film approaches a climax full of Iron Men, fireworks, and plenty of Hail Mary leaps within a dangerous shipyard, backed by a reliably fierce performance from Guy Pearce as his role in the Extremis program comes to fruition. What surprised me the most about the ending, once the smoke clears, is how final and cathartic it ends up feeling, as if it very well could be the bookend to Iron Man himself if they decided not to move the series forward. Giving closure to Stark’s tribulations as a self-focused hero and his rocky relationship with Pepper Potts, it’ll make the eminent day when the Avengers come knocking on his door again all the more intriguing. 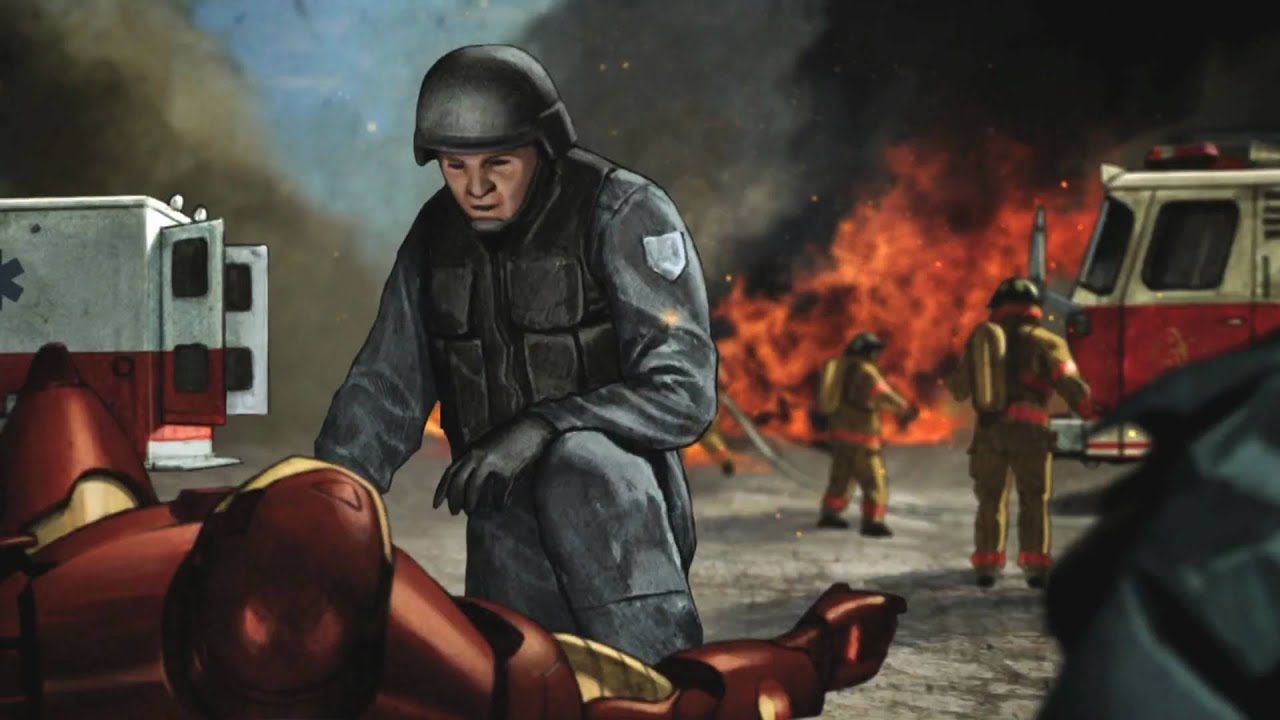 The story was written by comic book legend Warren Ellis and for those expecting anything similar to the feature film adaptations may be very disappointed. “Extremis” is a much smaller feeling arc, with only two action set pieces, one midway through the program and one at the end; instead the story explores the characters of Tony Stark as well as some spots of insight into the mysterious villain, Mallen. Mallen, a conservative extremist, is the guinea pig for a strain of the Super Soldier Serum known as Extremis. Once the serum alters our crazed foe forever, he embarks on a wave of destruction against the government and innocent civilians alike, aided by his near supernatural powers including super strength and pyrokinesis. Initially Tony is called into investigate the theft of the serum by a scientist friend Maya Hansen.

Ellis’ story takes an almost leisurely pace before Mallen and Stark face off for the first time, allowing viewers a glimpse into the mind of Stark via two notable scenes. The first is an interview for a documentary by an ultra liberal filmmaker, who tries to eviscerate Stark on camera, accusing him of war profiteering, immediately following a very friendly introduction off-camera. Ellis’ political statements are very obvious, and Stark’s calm, collected verbal destruction of the filmmaker is very similar to the eventual final confrontation with Fallen. Stark represents the middle ground of political ideology in the story, demonstrating the faults of extremism on both sides of the fence; the Extremis strain itself though is a fly in the ointment that ultimately forces Iron Man to understand that unchecked extremism sometimes must be met with equal or greater retaliation.

The second scene, taking place between Stark, Maya, and an older mentor figure. Here Ellis captures the strong distinction between Stark the man, and Stark the man behind Iron Man. The mentor brings Stark down a peg, pointing out how is flashy empire doesn’t benefit humanity nearly as much as the quiet, uncelebrated work of scientists such as Maya. The more Stark feels the burden of humanity from mentors as well as board members, the more he’s compelled to make his persona as Iron Man a legacy that will help mankind for as long as possible. When it comes time for Stark to don the suit though, “Extremis” isn’t nearly as exciting.

The motion comic style is extremely effective for the character moments, but the uneven approach to action, namely the use of the 3D CGI models for various elements, cheapens the overall effectiveness of the motion comic format. Ultimately, “Iron Man Extremis” is an enjoyable but flawed story and motion comic presentation. Voice acting is generally solid, with the actor handling Mallen being the weakest link. There are a few overplayed moments, especially in the beginning, with the actress playing Maya sounding like she didn’t have a full grasp on her character. Fortunately, the voice actor handling Tony captures the cool, confident, and brilliant aspects of the character as well as the doubt and sometimes self-hatred. The actors all are best when they are given Ellis’ best material to work with: the dialogue driven moments, which are arguably the most fascinating and engaging aspects of the production, mixing a moderate ideology with some well-developed character study.