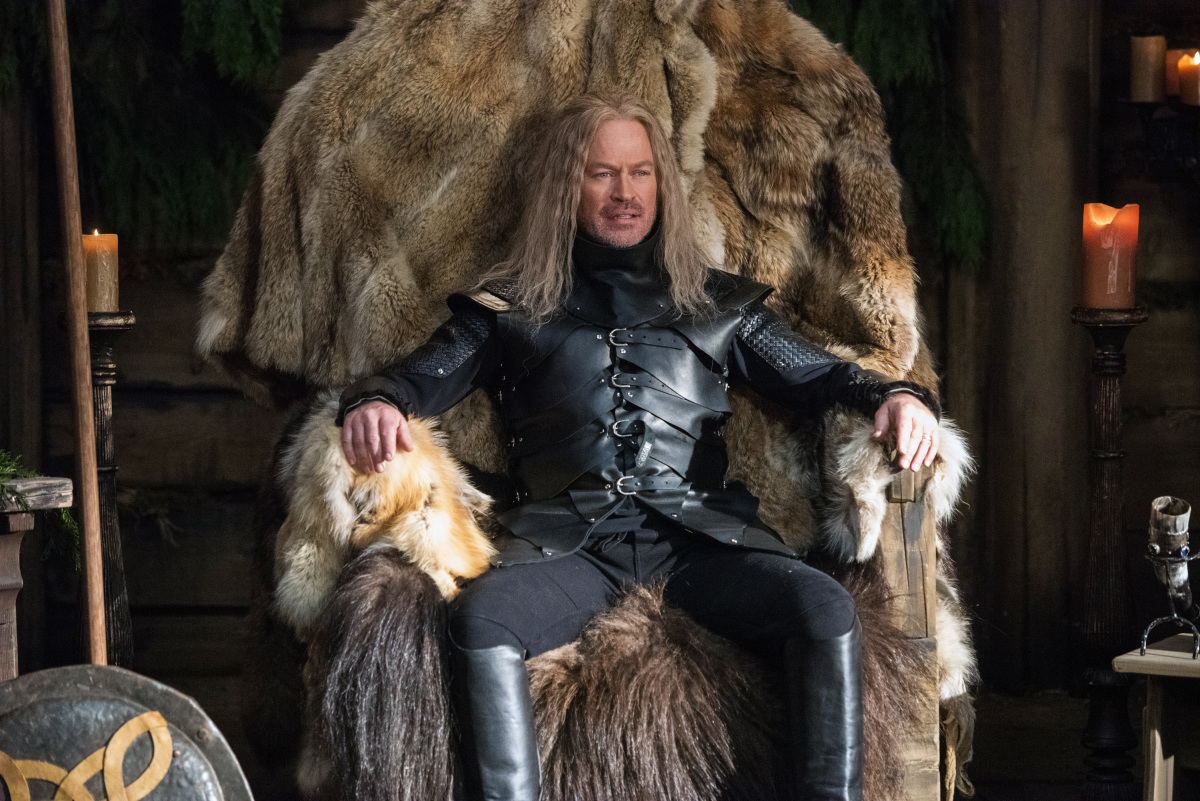 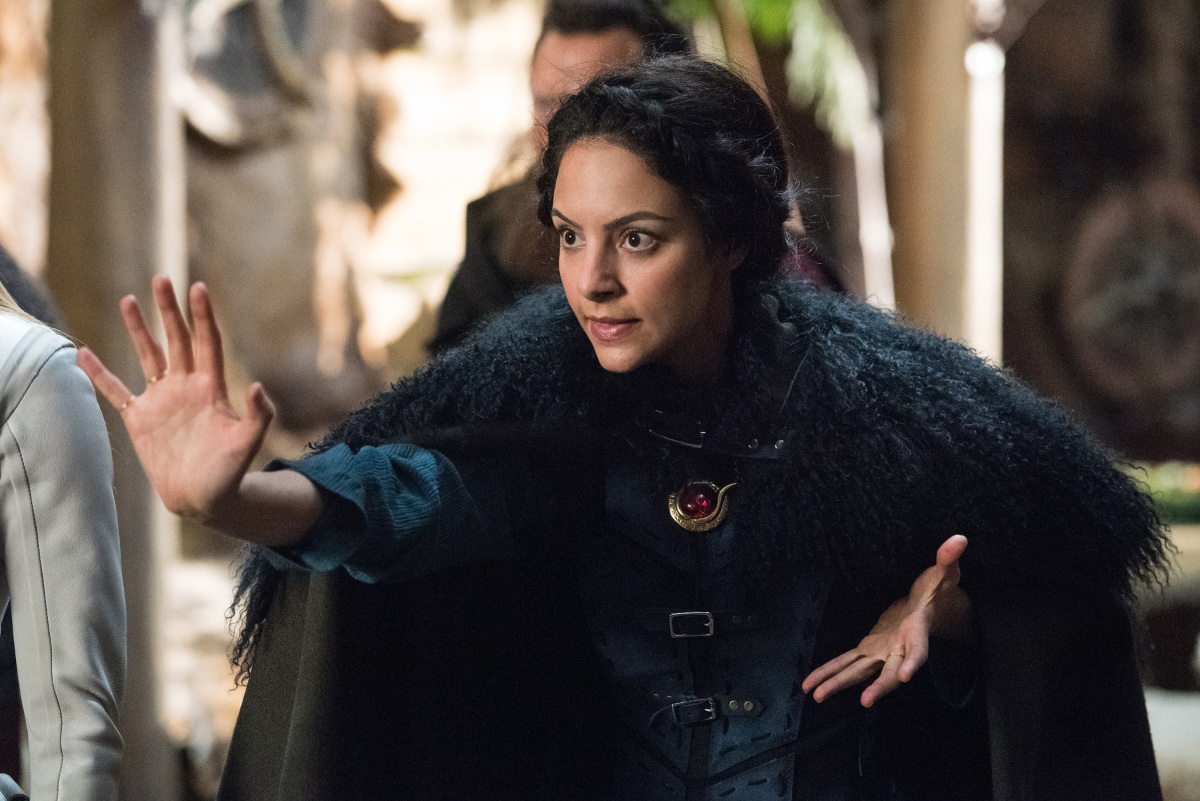 I’m sure most of us were expecting a very glum, downbeat midseason finale as the Legends mourned Professor Stein’s passing and struggled to get back into the time travel groove. So it comes as some surprise that this episode wound up being one of the most overtly silly and slapstick in Legends history. And this is the same season where the team reenacted the events of E.T. with a baby Dominator. It’s a real testament to the power of this show, the skill of the writing staff and the chemistry of the cast that such a goofy episode also managed to hit home in such a profound way. 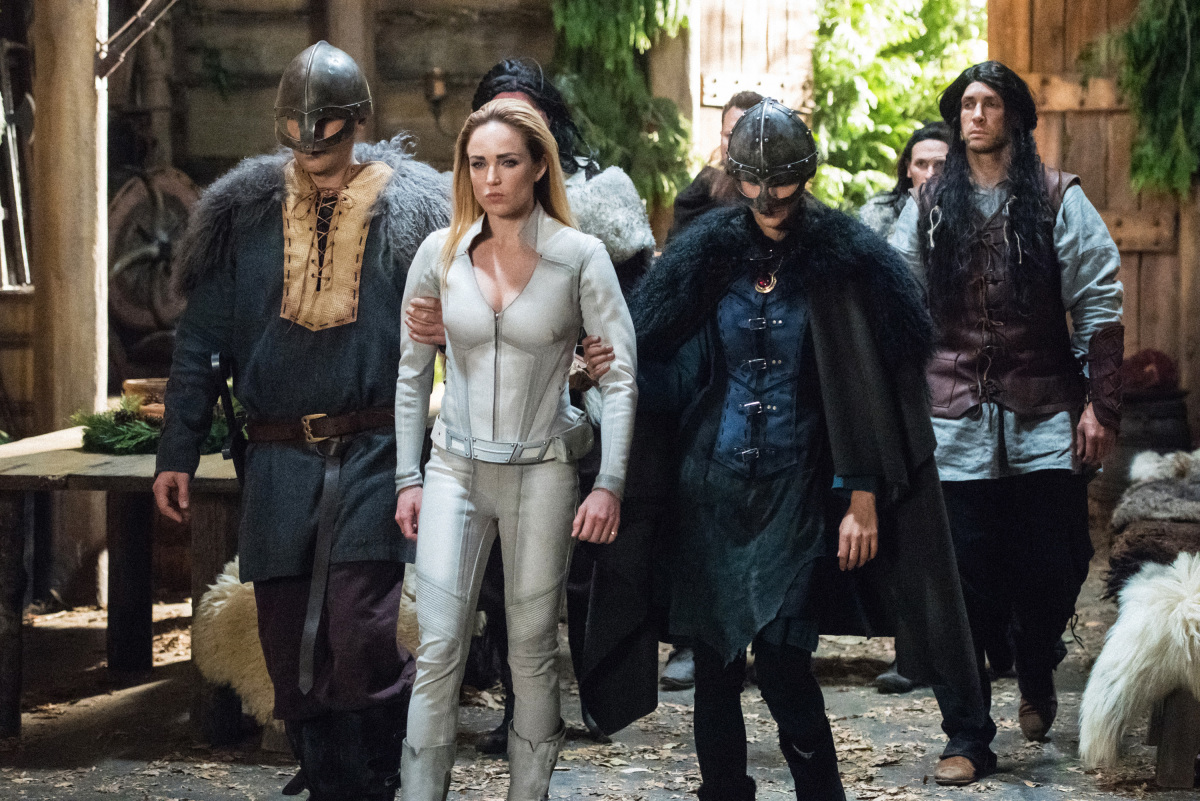 Granted, maybe I should have expected a goofy approach to this episode based on the title alone. “Beebo the God of War” certainly didn’t fail to live up to its name. The idea of a group of Vikings worshiping the Arrowverse version of Tickle Me Elmo and rewriting the course of North American history is just bizarre and stupid and wonderful in a way only Legends can really pull off. The Beebo doll and the Viking trappings proved to be an endless source of amusement here, while at the same time serving as a clever way to briefly bring Graeme McComb’s younger Martin Stein back into the picture. 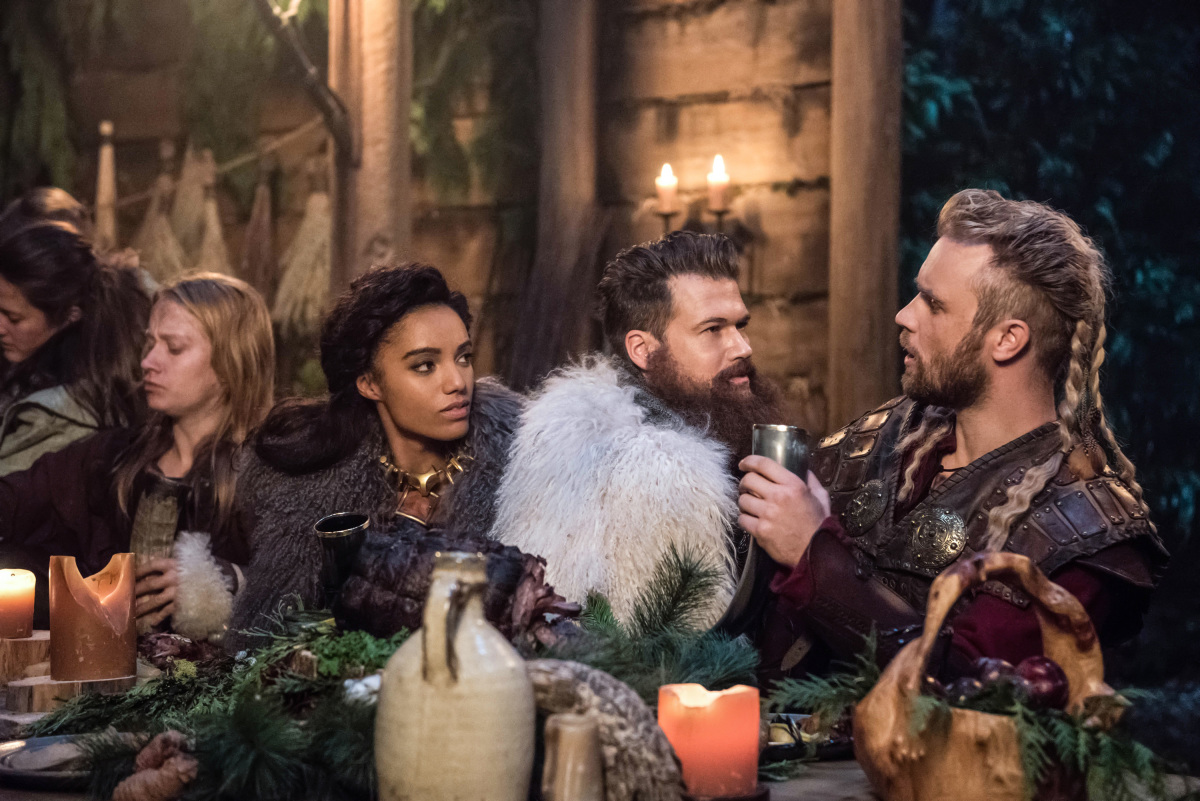 There were plenty of great character moments along the way as that conflict grew progressively more chaotic. Naturally, this was a big week for Jax, as he mourns the loss of his partner/father figure and wrestles with his guilt. Ultimately, this felt like a necessary coda to the rest of Season 3’s Stein material. It wrapped up the character’s journey on a happier, more uplifting note. It allowed McComb one last hurrah as a pitch-perfect stand-in for Garber. And it helped Jax move past his guilt and embrace the next phase of his own journey. Seeing Jax bid farewell to his team/family was extremely bittersweet. 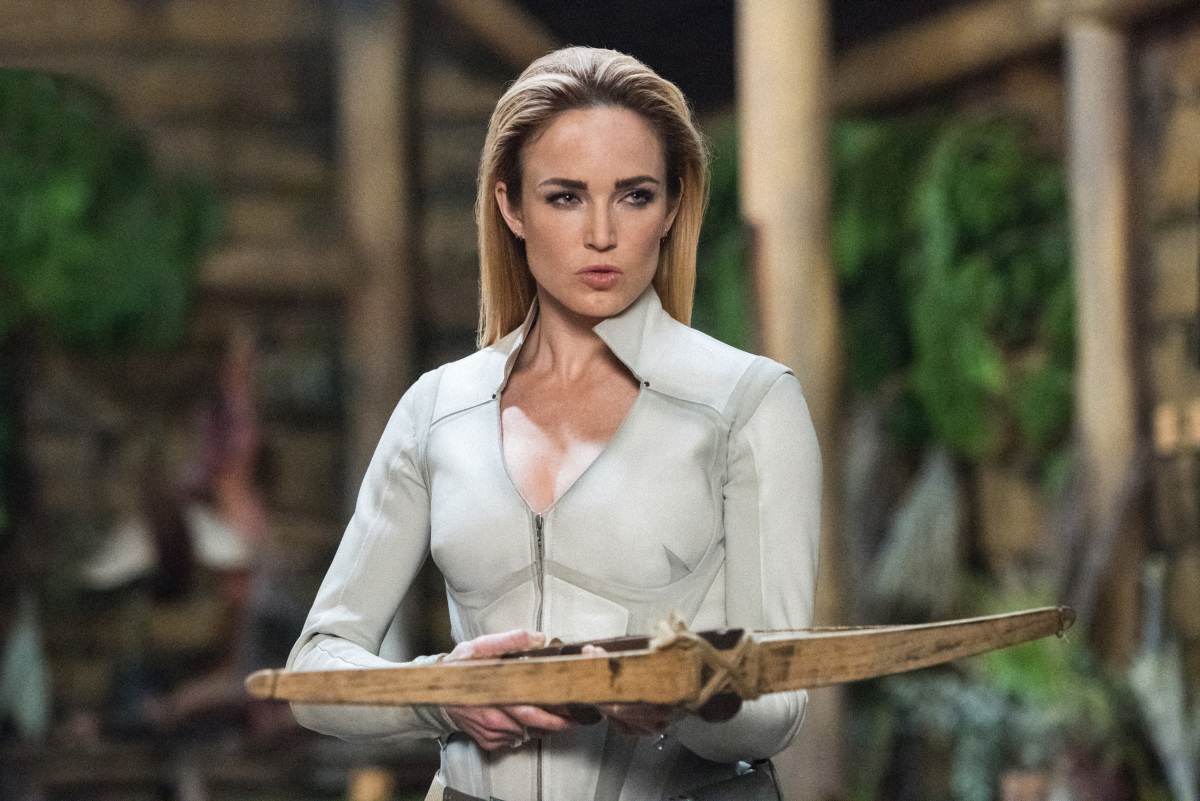 Above and beyond Jax’s struggles and young Stein’s Back to the Future dilemma, this episode really succeeded in celebrating the team’s status as a dysfunctional but close-knit family. Everyone mourned Stein’s death in their own way, resulting in a steady stream of hilarious and somber moments. Even Agent Sharpe was integrated into the conflict in a fun way. And if it wasn’t obvious that there’s a spark between Sharpe and Sara before, it definitely is now. 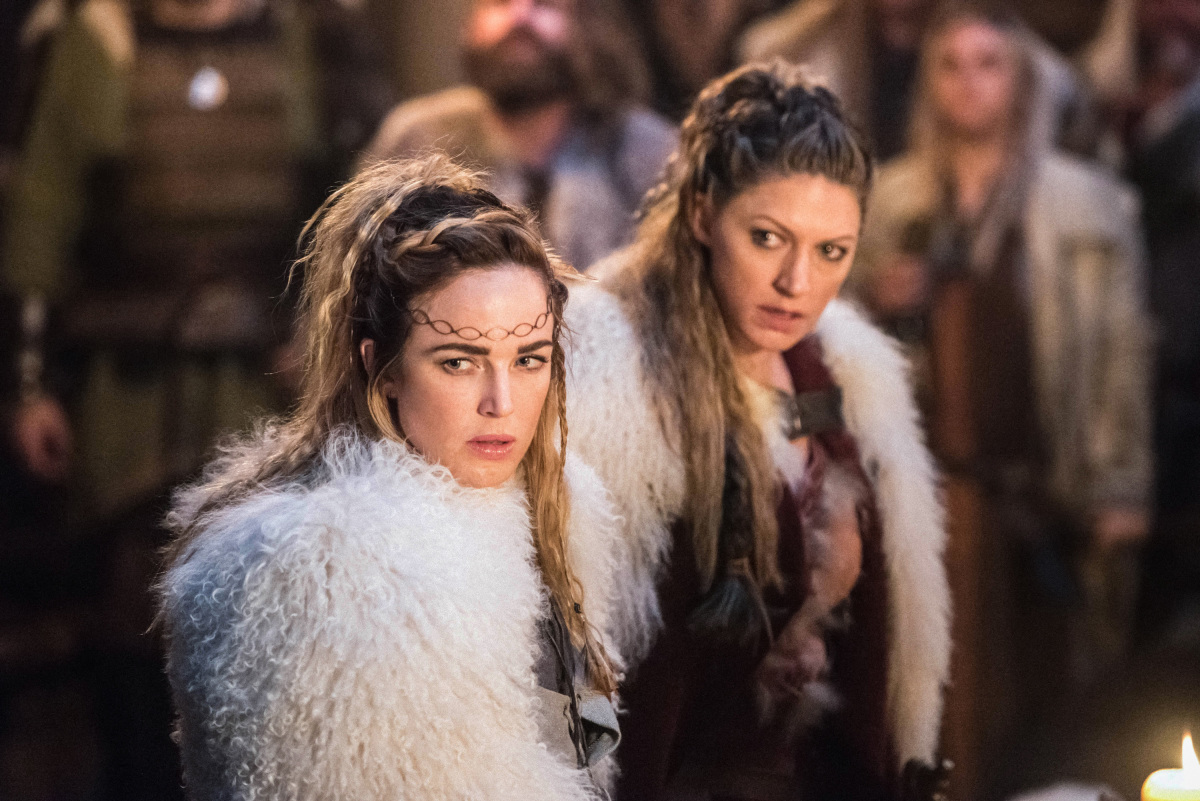 Wentworth Miller’s return really helped speed things along this week. “Leo” Snart is a real blast – even more entertaining here than he was in “Crisis on Earth-X.” This episode reminded me how much the team dynamic lost when the original Snart was killed off in Season 1. Leo’s antics are a hoot, but the revamped Captain Cold/Heat Wave relationship proved very poignant as well. I’m thrilled that Miller, like Garber, is being given an opportunity to really have fun with his character before saying his final Arrowverse farewell. 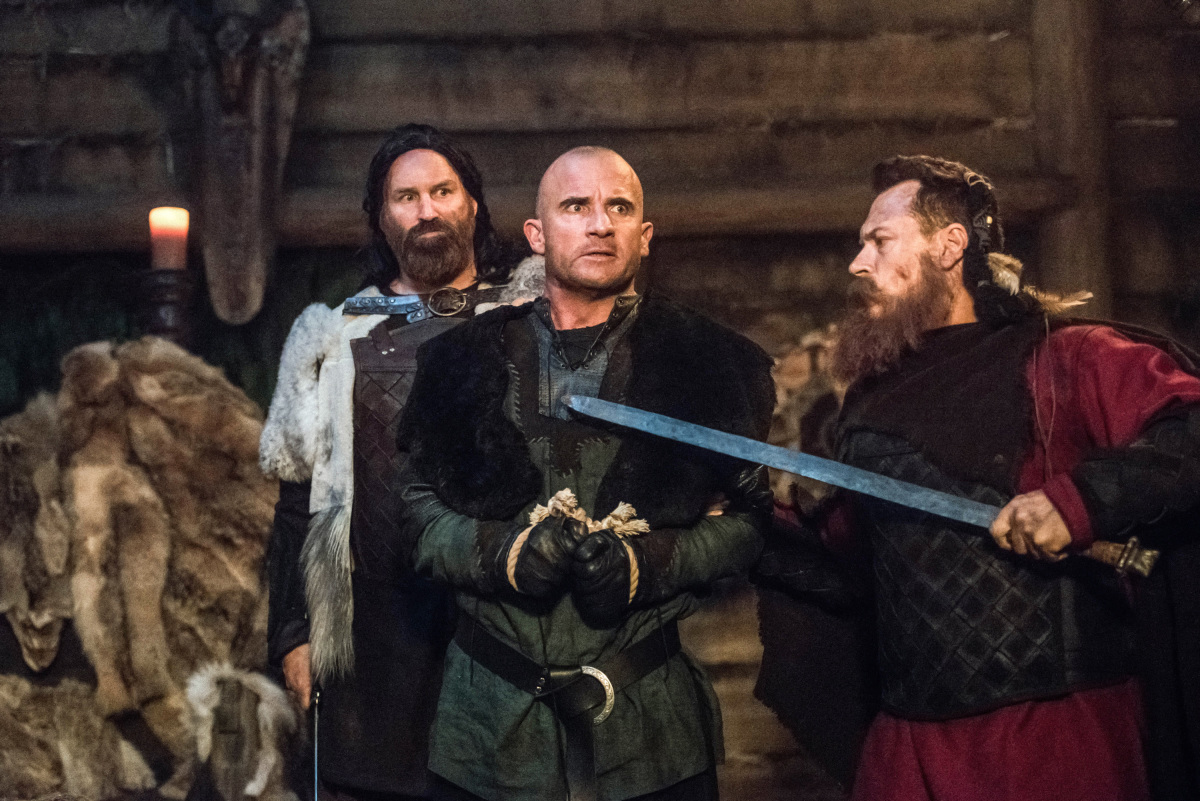 This episode proved very reminiscent of “Return of the Mack” in how an initially goofy storyline took a dark turn with the appearance of Damien Darhk. The fact that Grainne Godfree was a lead writer on both episodes is probably no coincidence. Fortunately, “Beebo the God of War” avoided falling victim to formula. The appearance of Darhk and his daughter merely served to add stakes to what would otherwise have been a fairly straightforward conflict. And it’s not like Darhk didn’t bring his own brand of hilarity to the table. His tacky Odin costume was simply divine (especially the wig). And you really have to appreciate those little stylistic flourishes, like the final showdown that played out more as a series of Rashomon-style daydreams than a straightforward battle. 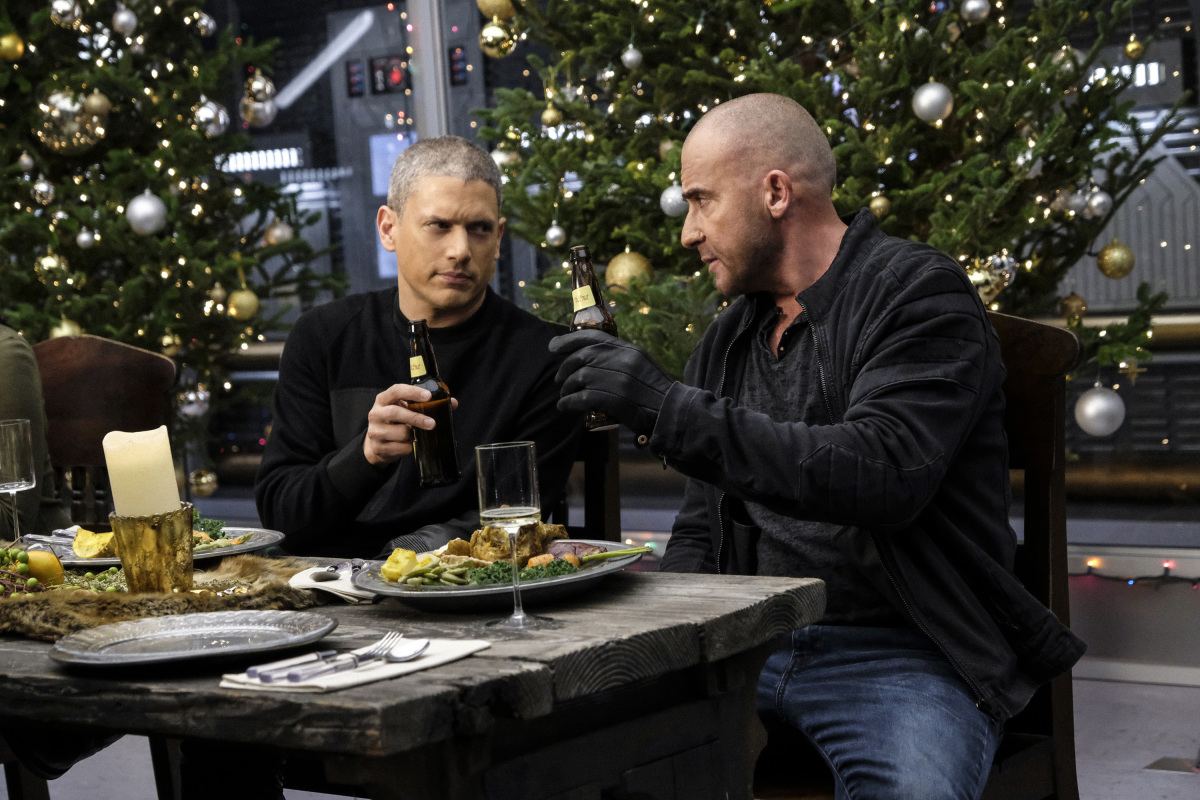 This episode was a perfect way to cap off 2017 and deliver the final word on Martin Stein. 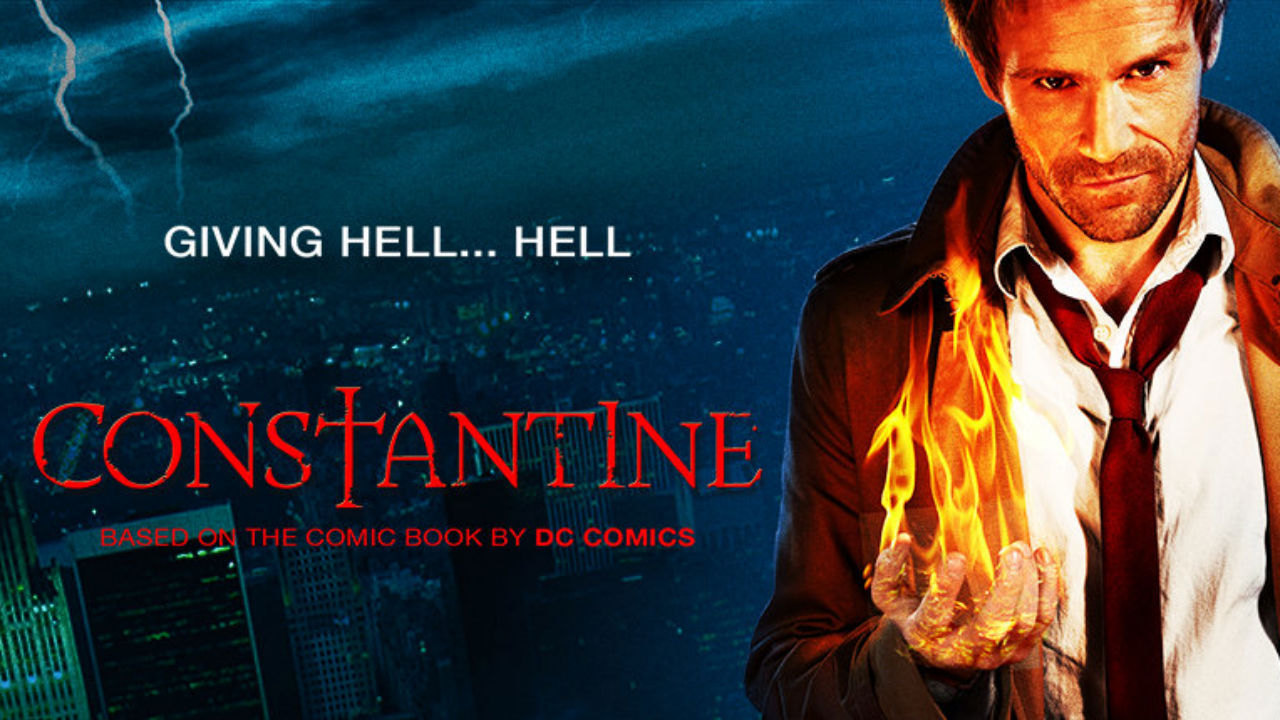 You can tell “Rage Of Caliban” is gonna be a good one from the last-minute excuse for Angélica Celaya’s absence: “Zed’s in art class.” All week? Apparently, because John and Chas spend the run-up to Halloween in Birmingham, Alabama figuring out how to exorcise a young boy safely after What Happened In Newcastle. Creator Daniel Cerone writes and Neil Marshall directs, in case you needed any more proof that this was originally the second episode of Constantine. Why sit on it? Just to get the ball rolling on the post-Liv version of the show? Yes, “Rage Of Caliban” sounds like a lost third-season Star Trek about some neglected godlike alien, but it’s actually a demon seed story that’s about as good as a network demon seed story can be. 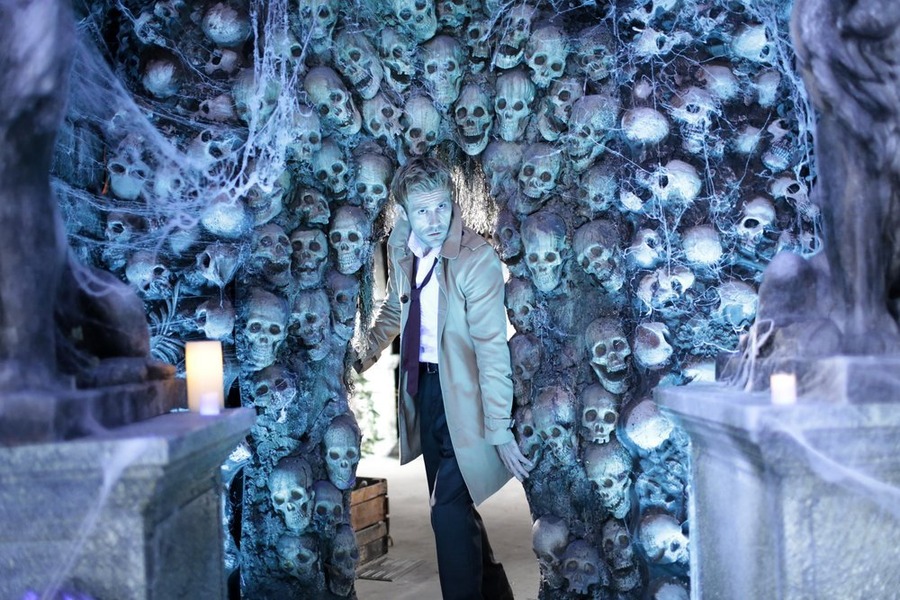 See, there just isn’t that much life left in evil children. Nothing short of a Claire Denis rethink is going to revive childlike drawings of scary things or kids smiling with black eyes. True enough, “Rage Of Caliban” isn’t that scary, but its scary scenes are vivid. Constantine is trying its damnedest with the look, sound, and mood of those scenes. The cold open is an establishing shot of a house and then a fluid pan—like Marshall’s demon shots in the pilot—through a house and up to the ceiling where a bloody man is being held, and then we follow him to the floor where he lands in front of a cowering girl. For some reason the demon moves on from her to the next child along the psychic railroad—another pilot callback, and this time we get to see what that railroad effectively means for a certain kind of spirit—a bullied boy named Henry. With Henry we get a couple of long suspense scenes that immerse us in that house, a standoff with a dog that struggles against his leather collar so mightily the sound is still haunting my ears, and a carving knife mishap that never really feels threatening but still effectively tightens the screws. The playground fight is silly, and the telekinetic explosions are too harmless to bother a mouse, but so what? Cerone and Marshall give evil children a fighting chance.

The real reason I suspect producers sat on “Rage Of Caliban” so long is they wanted to get into a groove with the new face of Constantine—John, Zed, Chas, and Manny—since they threw out the old one at the end of the pilot. Unfortunately that means we’ve gone five episodes without really finding out The Deal With Manny, which is that he can only help through guidance. “When humanity was granted free will, angels lost the power to directly influence events on earth.” John takes that to mean Manny’s just here to shoot the shit. He’s not wrong. But Manny is allowed to offer guidance, which I guess means cryptic counsel and which I don’t think actually has any bearing on John’s ability to solve the case. Manny tells him to think about when he was a child in order to appeal to Henry, or rather Marcello, the possessing spirit who was once a boy who got revenge on his abusive father by introducing him to an axe. Now Marcello’s catatonic in a psychiatric hospital. His animating spirit is off killing more parents.

That’s the core of this evil children story, violent dads and helpless kids who suddenly get to be not so helpless. Marcello’s dad used to chop his fingers off on a bloody stump. John’s used to beat him so much he considered suicide. And Henry’s is a macho tough guy who wants Henry to stand up for himself. When John first arrives in the guise of the new school counselor, shirt tucked in and tie too short, Henry’s dad knocks John out while he’s leaving. He’s not abusive to Henry, although he does mock him for crying wolf about someone in his room at night. Henry’s just very sensitive to not living up to his father’s vision of masculinity and the strain that’s putting on his parents’ relationship. He can’t handle the discord in his house. Luckily his new friend and cohabitant Marcello is quite talented at dealing with anger toward parents. “Danse Vaudou” ultimately spun itself into a metaphor for survivor’s guilt. “Rage Of Caliban” is more deliberate, but it lays out a motif and mostly leaves it at at that. A child can react like Marcello and continue a cycle of violence, or he can react like John and endure? The episode never really resolves Henry’s story—what happens next time he’s bullied at school? Is it okay for him to fight back?—but at least his happy family is restored.

The emotion comes from John’s story. First of all it’s actually a little funny. For instance, back at the home base, Chas starts playing with a sword. He asks what it does and then segues into a story about how he drove Renee away and how John never listens. John takes the sword from him. “This is the Sword Of Night. Compels the holder to speak the truth.” Not only do we finally get some specifics on Manny but the John-Chas relationship has never been clearer. The school counselor get-up is a good sight gag on its own, but the throwaway “I told Chas this wouldn’t work” is so evocative I can picture them bickering about it. And as for the heart of the story, all it takes is a quick flashback to What Happened In Newcastle to explain why John’s so afraid of exorcising the boy. Last time he sent a girl to Hell, and what with The Engorging Evil, who knows what it might take to pry Marcello’s grasp from Henry’s body. As usual, getting rid of the spirit ultimately looks so easy Zed could do it, but there’s a healthy serving of catharsis in the moment Henry comes to in the haunted house from The Guest. John did it! There’s never any real threat of him not saving the day, but the episode imbues this exorcism with all of John’s self-doubt. Saving Henry is an act of faith. And it’s rewarded.