When people think of an American adaptation of Kamen Rider, their minds usually move towards the abortion that is Saban’s Masked Rider. However it should be known that there is another (and vastly superior) attempt out there that goes by the name of Kamen Rider Dragon Knight. Produced back in 2008 (six years after the original airing of its base series Kamen Rider Ryuki) by unknown company Adness Entertainment, Dragon Knight ran for a total of 40 episodes and even won a Daytime Emmy for “Outstanding Stunt Coordination”. Sadly the show was cancelled before the final two episodes were aired, with them later appearing with the rest of the series on the 4Kids TV website. The episodes are long gone from there now, but thanks to the wonders of the internet the whole show is still easy to find if you’re curious.

While searching for his missing father, Kit Taylor discovers an Advent Deck while at the same time coming into contact with a mysterious dragon. Using the deck to fight monsters that have suddenly started appearing over the city, Kit butts head with another Rider – Len (Kamen Rider Wing Knight). Len later explains that he and the Kamen Riders are from Ventara, a world behind the mirrors. After his world was captured and the remaining 10 Riders “vented” by the evil General Xaviax, Len has vowed to continue the fight before Earth receives the same fate.

The two join forces to fight Xaviax, but the alien general has his own plans. With the remaining 10 Rider Decks, he can find the mirror twins of the Ventara Riders on Earth – offering them their greatest desires if they agree to sell their planet out and work for him. Its Rider against Rider has an all-out battle begins again, deciding the fate of both Ventara and Earth.

Of course, with a total of 12 (later 14) Riders appearing in the show, there simply isn’t enough time for equal focus. Many of the Riders are watered down in badly developed villain roles, with a select few having real focus. The main stars of the show are of course Kit (Dragon Knight) and Len (Wing Knight), with Kamen Riders Strike, Siren, Sting having crucial roles in the show. Others such as Torque and Axe help the plot along, but the remainder are mostly superficial.

Kit and Len are very well rounded characters, who grow more and more into their roles as the story progresses. Xaviax himself is an incredibly good villain – both charismatic and a master manipulator. It’s just as well his charisma is enough to carry the villain side of the show, because his right-hand man Kamen Rider Strike is a pretty dull servant despite racking up the highest number of “kills” in the show. There are also a number of important side characters – conspiracy theorist/journalist Maya Young, teenage hacker Trent Mosley and their friend Lacey. Despite not really adding a great deal the characters are well integrated into the plot, until eventually both Maya and Trent receive an upgrade of sorts to become characters with very good pay offs. Lacey on the other hand just goes home and not a single thing of value is lost.

The use of source footage also feels non-existent in Dragon Knight. While there are certainly Ryuki scenes used (often very noticeably because of the age difference), there is also an insane amount of newly filmed suit scenes and a real effort to use every resource the show had. In Ryuki Kamen Riders Femma, Ryuga and Camo are all relegated to appearances in movies and specials, however Dragon Knight features ALL 13 Riders within its story – Siren (Femme) and, to a lesser extent, Onyx (Ryuga) even being main characters. Another example is Kamen Rider Torque – he’s a bit player in Dragon Knight, but undoubtedly a main character in Ryuki. 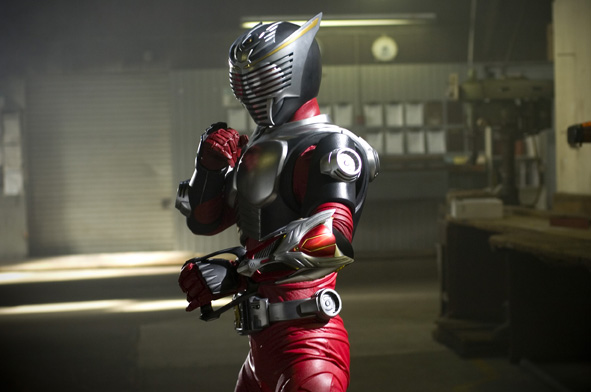 But despite the highly impressive lengths Dragon Knight has gone to have its own story and footage, it still suffers from a range of problems. Elements such as the contract beasts and the technical originals of the Advent Decks are poorly defined, with far too much of the exposition coming at the end of the show. This makes the tail end of the show extremely rushed, with episode 31 featuring no less than FOUR key moments that could have otherwise had episodes to themselves. The show also bizarrely switches focus in the last six episodes from Kit’s story to that of Adam (the original Dragon Knight and Kit’s mirror twin), with him reclaiming the Deck and Kit becoming the new 13th Rider – Onyx (another issue that’s very poorly explained). While the story is still very enjoyable, changing the focus so close to the end does damage it a little bit.

Three clip episodes is also far too many for a 40 episode series, especially when the last episode turns out to be one of them – leaving the epilogue to a total of around five minutes at the end. When your big finale episode is a clip show, it’s not hard to imagine why the show might have been cancelled before the end…

Kamen Rider Dragon Knight is by no means a perfect series, but it is however a perfect example of how to do an adaptation PROPERLY. Despite the story beginning to trail off just when it should be getting to crunch time, it is an extremely well-thought out series that makes good use of its source material while by no means relying on it. Very few Power Rangers series display the level of difference to their Super Sentai counterparts that Dragon Knight does to Ryuki, and that is a highly commendable achievement even if it didn’t have the quality to back it up.