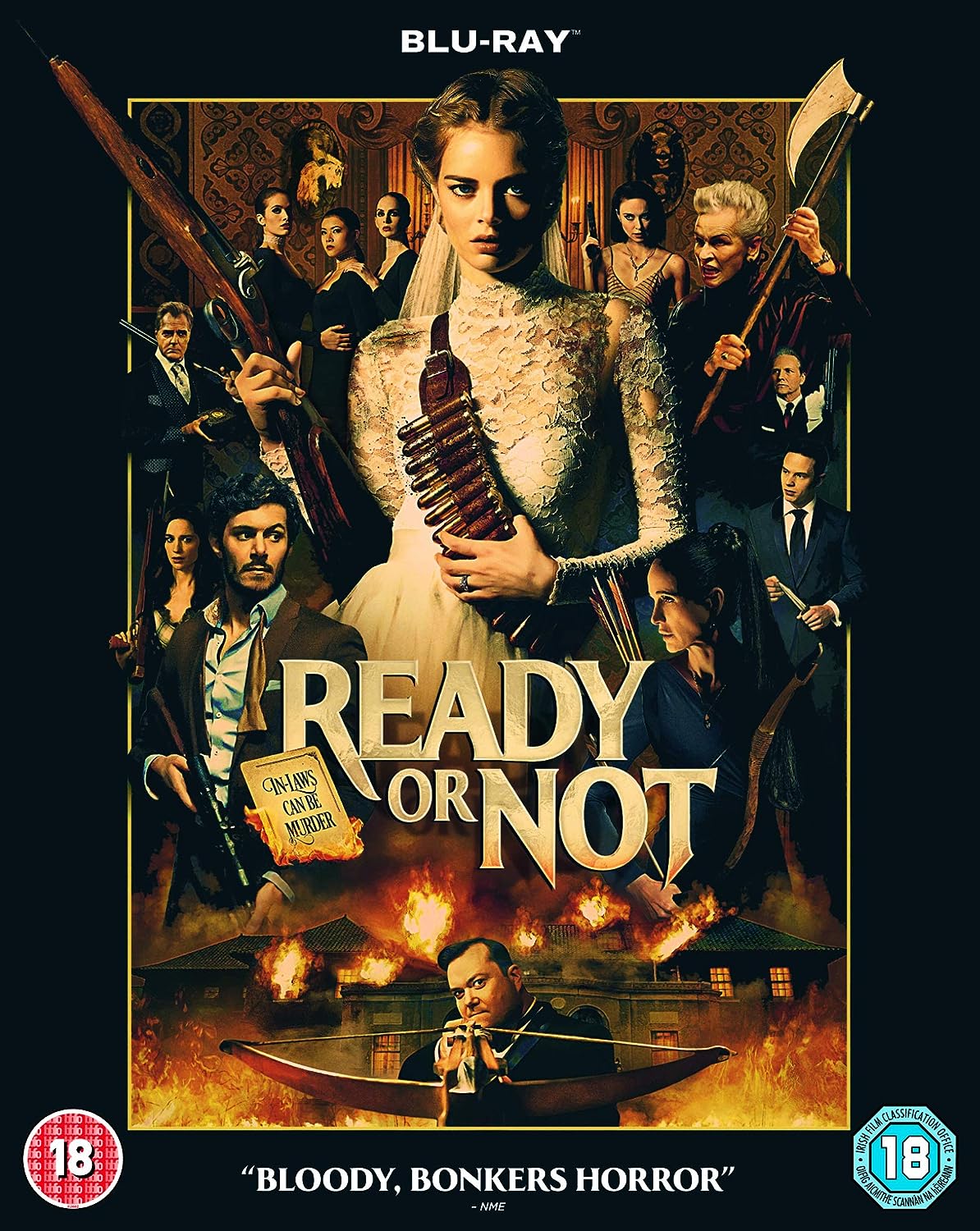 Young brothers Alex and Daniel Le Domas are seen running through the halls of a house. Daniel, the older brother, leads Alex around the house and finally has Alex hide in a closet when a man approaches him begging Daniel to help him. Daniel looks at him for a moment before yelling “He’s in here!” The man runs but is stopped by members of Daniel and Alex’s family in masks and with different weapons. One of them shoots the man in the chest and a woman in a wedding dress pleads for them to stop. The man is picked up off the ground and dragged into a room. The door of the room then shuts behind them. Thirty years later, Alex has returned home to marry his fiancée, Grace, a former foster child eager to finally have a family. On their wedding night, he tells her that, as tradition, every outside addition to the family must play a game. Grace has to draw a random card, and the game they have to play will be written there.The family includes Alex, his alcoholic brother, Daniel, and drug-addicted sister, Emilie; their father, Tony and mother, Becky; Daniel’s snobbish wife, Charity; Emilie’s whiny husband, Fitch; and the sombre Aunt Helene. It is explained that their ancestor, Victor Le Domas, made a deal with a man named Le Bail. Le Bail would build the Le Domas fortune in exchange for the Le Domases observing this tradition. Grace draws a card labeled “Hide and Seek.” Unaware of the truth, she hides while the Le Domases arm themselves with antique weapons to hunt her down.When Grace witnesses Emilie accidentally killing one of the maids believing it to be her, Alex confesses that the “hide and seek” card is the only game that requires the family to kill the recipient. They believe that if Grace survives until dawn, the entire family will die, as per the agreement with Le Bail. He kept the truth from Grace, knowing she would leave him if she knew. The last time someone pulled that card was thirty years ago when Helene’s husband was killed. Shocked, scared, and angry, Grace becomes determined to survive. She is discovered by Daniel, who is disillusioned with the bloody family tradition and gives her a head start. To prevent his family tracking Grace, Alex destroys the security monitors before being restrained by Daniel and Tony.Grace escapes the mansion and hides in the barn, only to be shot in the hand by Emilie’s young son, Georgie. Furious, she knocks Georgie out, but accidentally falls into a pit filled with the decaying corpses of the previous sacrifices. She climbs out, though not without more wounds, and is pursued by the butler, Stevens. She fights him and escapes in his car, but the car is quickly reported stolen and shut down. Stevens catches up and tranquilizes her. While being driven back, Grace awakens and attacks Stevens, causing the car to crash. However, she is captured again and restrained on the symbol of a pentagon as the family prepares to sacrifice her. They drink from a ceremonial cup and start to vomit blood. Daniel releases Grace, revealing he non-lethally poisoned its contents. Charity, however, shoots Daniel in the throat, causing him to bleed to death; after pistol-whipping Charity, Grace thanks Daniel for helping her. Looking for an exit, Grace is cornered by Tony, she bludgeons him with an oil lamp, and inadvertently starts a fire.Becky attacks Grace; having had enough, Grace snaps and bludgeons Becky to death with Le Bail’s wooden game box. Alex finds Daniel’s body before finding Grace and his mother. Realizing that Grace no longer trusts him and will not be with him after all this, Alex subdues her. The group hails Satan as Alex prepares to stab her. At the last moment, Grace twists, taking the stab to her shoulder and freeing herself. Dawn breaks, but when nothing happens, the family believes their tradition was a lie, and all of this was for nothing. However, Helene suddenly explodes. One by one, the remaining family members explode in bloody messes. Alex pleads for Grace’s forgiveness out of cowardice; she rebukes him, and he explodes. As the mansion burns, Grace sees Le Bail in the fire, nodding in apparent approval, and realizes the pact was real.As the police arrive, Grace sits on the patio steps, exhausted and relieved, her wedding dress turned red from blood, and smokes a cigarette. When asked about what happened, she simply replies “In-laws”. 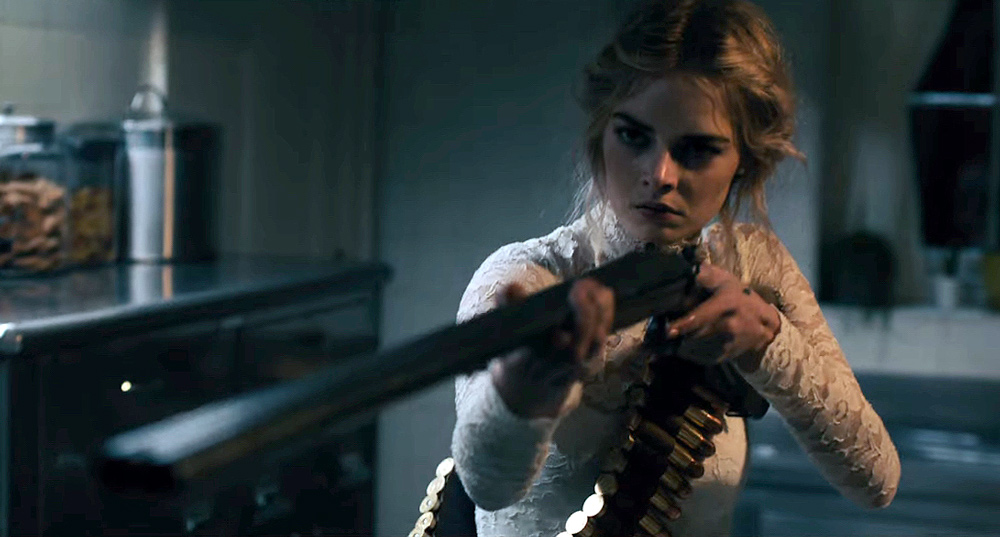 Samara Weaving is the absolute best, she mixes fear, irony, humor and toughness like no one else. Loved her in The Babysitter and in this one. 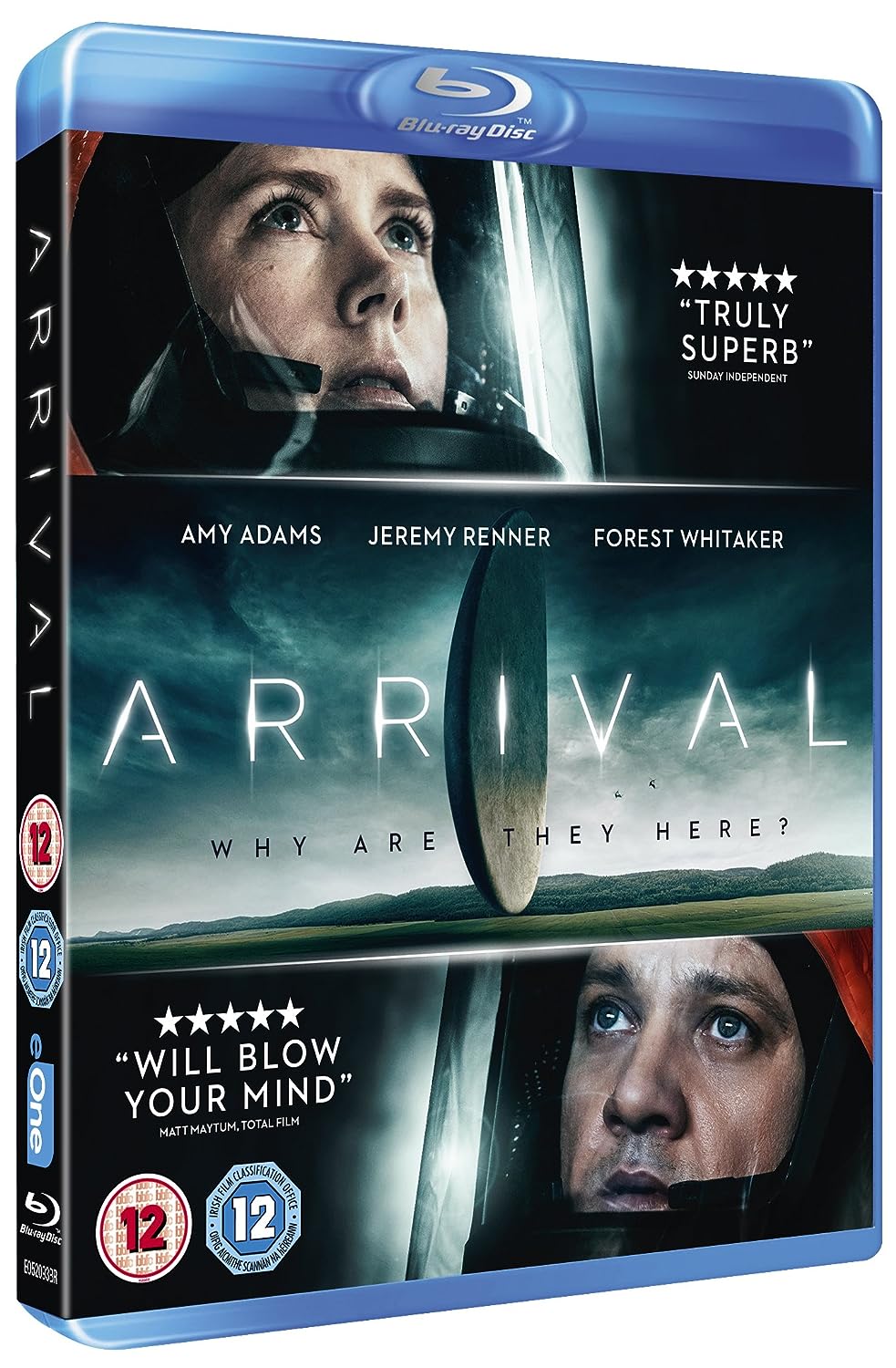 While she is lecturing at a university, twelve extraterrestrial spacecraft appear across the Earth. U.S. Army Colonel Weber asks Louise to join physicist Ian Donnelly to decipher the aliens’ language and find out why they have arrived. The team is brought to a military camp in Montana near one of the spacecraft, and makes contact with two seven-limbed aliens on board. They call the extraterrestrials “heptapods”, and Ian nicknames them Abbott and Costello. Louise discovers that they have a written language of complicated circular symbols, and she begins to learn the symbols that correspond to a basic vocabulary. As she becomes more proficient, she starts to see and dream vivid images of herself with her daughter and of their relationship with the father.
When Louise asks what the aliens want, they answer: “offer weapon”. A similar translation of “use weapon” is made by one of the other sites. Fear of a potential threat from the aliens leads other nations to close down communication on the project, and some prepare for an attack. However, Louise argues that the symbol interpreted as “weapon” might have an alternative translation, such as “tool” or “technology”.Rogue U.S. soldiers plant explosives in the spacecraft. Unaware, Louise and Ian re-enter. The aliens give them a much larger and more complex message. Abbott ejects Ian and Louise from the craft as the explosion occurs, which leaves them unconscious. When Louise and Ian re-awaken, the military is preparing to evacuate, and the spacecraft moves higher above the ground. Ian works out that the symbols relate to the concept of time, and that the message is one-twelfth of the whole “gift”. They conclude that the aliens must want nations to cooperate.Meanwhile, China notifies the world that its military is planning to attack the spacecraft off its coast. Louise rushes back to the spacecraft in Montana, which sends down a shuttle to take her inside. She meets Costello, who communicates that Abbott is dying or dead. Louise asks about her visions of a daughter, and Costello explains that she is seeing the future (revealing that her “visions” were not flashbacks but flashforwards). Costello also communicates that they have come to help humanity by sharing their language, which is the “weapon” or “tool” because it changes the perception of time. The aliens know that 3000 years into the future they will need humanity’s help in return.

Louise returns as the camp is being evacuated. She has a vision of herself at a future United Nations reception, being thanked by General Shang for convincing him to suspend China’s military attack. He explains that she had called his private mobile telephone. He shows her its number, which he says he knows he must do without understanding why. In the present, Louise steals a satellite phone and calls Shang, but realizes she does not know what to say. Her vision continues with Shang explaining that she had convinced him by repeating his wife’s last words in Mandarin, which he tells Louise.[nb 1] This convinces Shang in present time; the Chinese attack is called off, and the other nations resume contact. The twelve spacecraft then disappear from Earth. 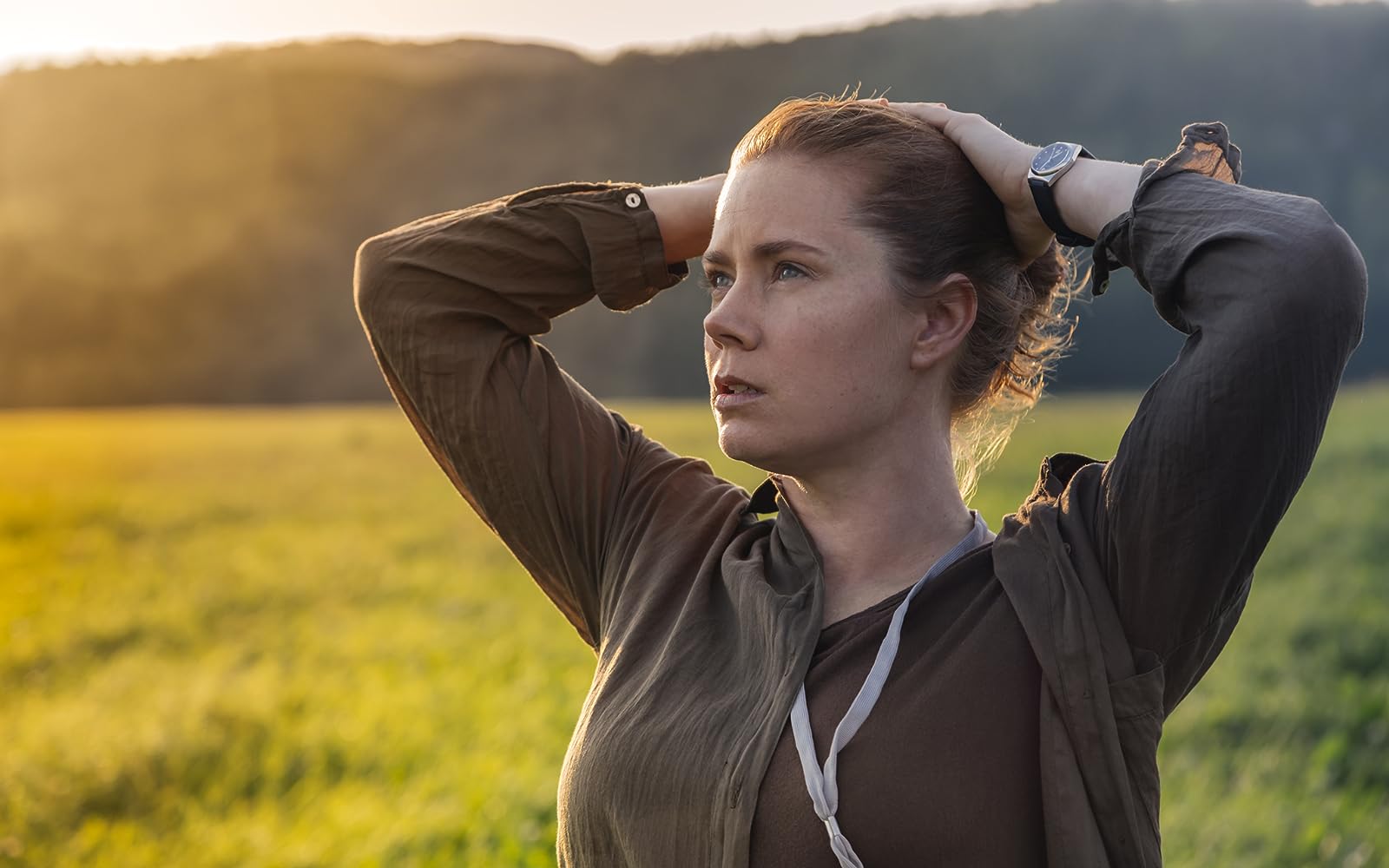 When packing to leave the camp, Ian admits his love for Louise. They discuss life choices, and whether they would change them if they could know the future. Louise foresees that Ian will father her daughter Hannah, whose name is an intentional palindrome, but will leave her after discovering that she knew their daughter would die before adulthood. Nevertheless, when Ian asks Louise if she wants to have a baby, she agrees. 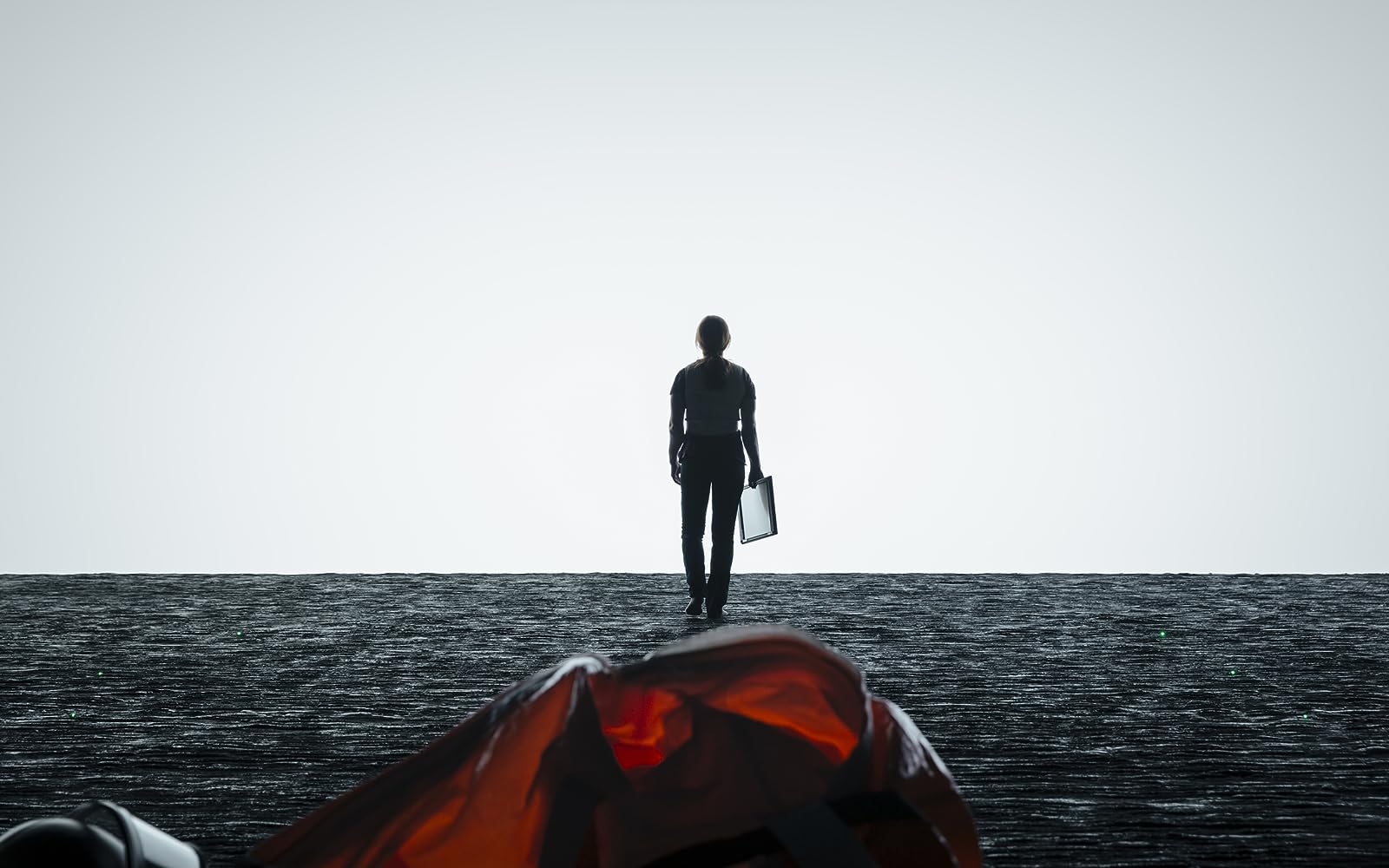 Arrival is one of the best films of 2016 and a really great example of science fiction filmmaking from Denis Villeneuve, who is perfectly suited to bring us the sequel to Blade Runner next year. I would happily put this film in the same league as something like Close Encounters of the Third Kind, one of the all time greats of sci-fi.