The episode begins with Robin’s alarm clock going off at 8:00 AM, and all the Titans run to the living room, expecting presents under the Christmas tree. In the past two years (soon to be three), they have gone without presents, and today, they find themselves receiving no presents again, so the Titans get suspicious. Robin says there is only one reason why they weren’t getting presents…they were on the Naughty List! They journey into the North Pole, sneak into Santa’s workshop and disperse. Raven and Starfire ask a gingerbread man where the naughty list is, but after a while, they start devouring everything in his house. Meanwhile, Beast Boy visits Santa’s reindeer and ends up upsetting Rudolph with insults, as he drives away in Santa’s sleigh.

Over in the toy factory, Cyborg gets in with the elves and asks where the naughty list is, but the noise makes the leader elf angry. The leader elf asks what was happening, and Cyborg blames another elf, who is then carried away by Jingle and Jangle, as Cyborg gets away.

Meanwhile, Robin investigates in Santa’s office, standing over Santa’s Naughty List, attempting to erase the Titans’ name from the list. Surprisingly, it doesn’t erase as he expected, so he tries rubbing out the Titans’ name first, uses white out and then a mini bomb, but eventually gives up from the failures. He is then interrupted by Santa’s dog, which intentionally barks to get Santa’s attention. Santa comes over and scolds Robin for his actions, but the other Titans eventually arrive to complain about how they didn’t get their wish for presents for the past three years. Santa states that presents are not the true meaning of Christmas, resulting in the Titans blowing up his toy factory. Forced against his will, Santa quickly confesses that the true meaning of Christmas is presents, and ends up taking the Titans in his sleigh, who help him give all nice and naughty people presents. 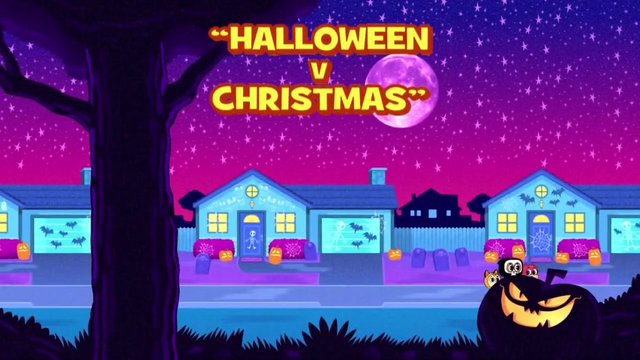 On the Night of Halloween The Titans plan to scare the trick or treater’s but there is no Candy or Decoration. When all hope is lost it is revealed to the Titans that Santa took all candy and decorations. Santa chases the Titans back to the Titans Tower and tells the Titans he will not leave until the Titans give Santa the last bag of Candy.

Santa plays Christmas Carols, and protends to give them Christmas Presents in exchange for the last bag. But the Titans refuse, so the Titans call in Great Halloween Spirit,Dracula and Frankenstein to help fight Santa. The Titans almost win but Santa pins Great Halloween Spirit and Titans give Santa the Candy in defeat. But, they had really swapped the bag of candy for a bag of TNT who Santa says “wait, a minute these are not treats” and Titans reply saying “There TRICKS!” before Catapulting Santa into the Snow. Then the Titans recreate Halloween (to the Thriller Song) and Robin shouts “Merry Halloween to all and to all a Scary Night” then the moon laughs evilly.

Teen Titans Go! is a funny show and must be taken as the show it is a as a friendly kids show. These two Holiday are fun and light hearted they are short so you don’t have to worry about attention span.