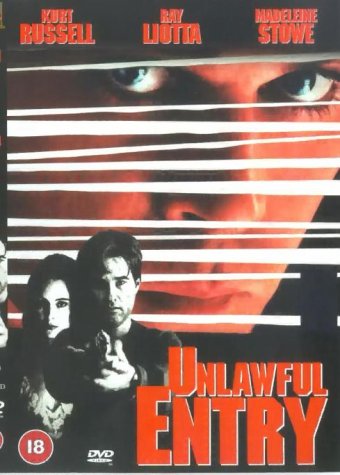 Steve Makaj (Arrow)Michael and Karen Carr (Kurt Russell and Madeleine Stowe) are a couple living in an upscale part of Los Angeles, and their peace of mind is upset by an intruder coming in through their skylight one night. The intruder briefly takes Karen as a hostage, before dumping her in the swimming pool and making his escape. The Carrs call in the police, one of whom, Pete Davis (Ray Liotta), takes extra interest in the couple’s case. He cuts through department red tape and expedites speedy installation of a security system in the Carrs’ house.  When Michael expresses an interest in getting revenge on the intruder, Pete invites him on a “ride-along” with his partner, Roy Cole (Roger E. Mosley). After dropping Cole off, Pete takes Michael out to arrest the man who broke into the Carrs’ house, offering Michael a chance to take some revenge using Pete’s nightstick. Michael declines, but Pete administers a vicious beating to the intruder, leaving Michael deeply suspicious of Pete’s mental stability. He suggests that Pete get some professional help and, especially, stay far away from him and Karen in the future.

Pete takes neither suggestion. Instead, he begins to stalk the couple, particularly Karen, with whom he’s obsessed. Pete even appears in the couple’s bedroom one night while they are making love, just to “check that everything’s okay”. When Michael files a complaint against Pete’s unwanted attentions, Pete uses his police connections to destroy Michael’s business reputation. Encountering bemused apathy from Pete’s superiors in the LAPD, Michael turns to Cole, who orders his partner to cease his obsessing, see a shrink or face suspension. Pete then murders Cole, blaming it on a known criminal. Pete then frames Michael on drug charges by planting a supply of cocaine in the Carrs’ house, leaving the way clear for him to move in on Karen. Putting his attorney’s finances on the line, Michael gets out on bail and takes matters into his own hands. Back at the Carr house, after finding that Pete has brutally murdered her friend, Karen rejects a now distraught Pete, who, on branding her a tease for leading him on and kissing him, goes berserk and tries to rape her. Michael returns home which leads to a confrontation between the two men and ends in Michael shooting Pete dead with his own side arm in self-defense.

Unlawful Entry is a suspenseful thriller with a brilliant cast of Ray Liotta, Kurt Russell and Madeleine Stowe. I should point out that Liotta’s performance as a physchotic police officer is one of the best of his roles. What makes the film outstanding is the sense of struggle, intensity and emotion found in both Liottas and Russells characters.