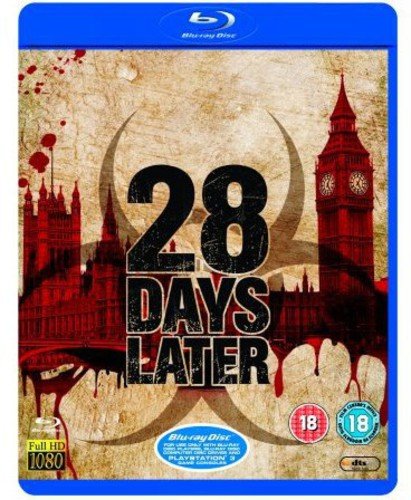 In Cambridge, three animal liberation activists break into a medical research laboratory. A scientist in the lab desperately warns them against releasing the captive chimpanzees, which are infected with a highly contagious rage-inducing virus. Ignoring his pleas, the activists release a chimp, which infects a female activist. She then attacks and infects everyone else present.

28 days later, in London, Jim—a bicycle courier—awakens alone from a coma in St Thomas’ Hospital. He wanders the streets of London, finding the city deserted with signs of catastrophe everywhere. Jim eventually encounters some infected humans and is pursued, but survivors Selena and Mark rescue him. At their shelter, the two explain to Jim that while he was in a coma, a virus had spread quickly among the populace, resulting in societal collapse. They claim the virus had been reported in Paris and New York City as well, suggesting the infection has spread worldwide.

The next day, Selena and Mark accompany Jim to his parents’ house in Deptford, where he discovers they had committed suicide. That night, the three fend off a pair of infected; Mark is bitten, and Selena kills him. She explains to Jim that the virus spreads through blood and saliva and overwhelms its victims in 10 to 20 seconds. After leaving the house, the two see some blinking Christmas lights from Balfron Tower. There, they discover two more survivors: cab driver Frank and his daughter Hannah, who allow them to take shelter. The next day, Frank informs them that their supplies (particularly water) are dwindling; he plays them a pre-recorded radio broadcast from a military blockade near Manchester, claiming to have “the answer to infection” and promising protection to any survivors that can reach them.

The group board Frank’s cab and head to Manchester, bonding with one another during the trip. At the deserted blockade, Frank is infected when a drop of blood falls into his eye. He is killed by arriving soldiers, who take the remaining survivors to a fortified mansion under the command of Major Henry West. West reveals to Jim that his “answer to infection” entails waiting for the infected to starve to death and luring female survivors into sexual slavery to repopulate the world. The group attempts to flee, but Jim is captured and chained next to Sergeant Farrell, a dissenting soldier. Farrell shares with Jim his speculation that the virus has not spread beyond Great Britain and that the country is being quarantined.

The next day, the soldiers prepare the girls for gang rape, while two others lead Jim and Farrell to execution. While his executioners argue after killing Farrell, Jim escapes. Jim lures West and another soldier to the blockade, where Jim kills the latter and leaves West stranded for arriving infected. He runs back to the mansion and releases Mailer, an infected soldier West kept for observation. Mailer infects another soldier and they wreak murderous havoc throughout the mansion. In the confusion, Corporal Mitchell drags Selena upstairs, where Jim ambushes and kills him. The two reunite with Hannah and run to Frank’s cab; Jim is then shot by West, who has been waiting inside. Mailer grabs West through the rear window of the cab and kills him, and the trio finally leave the mansion. Another 28 days later, Jim is recovering at a remote cottage. Downstairs, he finds Selena sewing large swaths of fabric when Hannah appears. The three rush outside and unfurl a huge cloth banner, adding the final letter to the word “HELLO” laid out on the meadow. A lone fighter jet flies over the three survivors, the infected are shown dying of starvation, and the pilot calls in a rescue helicopter.

28 Days Later has been one of my favorite movies of all time since I first saw the opening scene! The characters are very imaginative and the film has the perfect balance between gore and terror. The music by John Murphy brings the film alive and the camera angles are perfect. It has truly brought the zombie horror back from the dead. The infected and the virus are believable and scary because you never know what those scientists are up to these days… The only downside was the fact that it was only Britain infected (a soldier says that England was quarantined). It would have been a lot scarier if the world was infected because there would be nowhere to run. But overall, Danny Boyle has brought an original idea and made it better and more interesting, and yes, it is scary as hell.