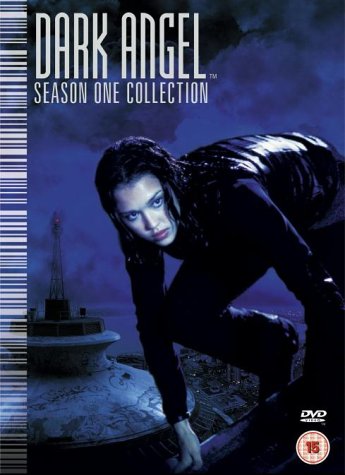 Dark Angel stars Jessica Alba (Idle Hands) as Max, a genetically-engineered supersoldier who escaped from an expectedly top-secret government facility as a child. Despite the passing of a full decade, the agents of Manticore, led by Donald Lydecker (John Savage), remain determined to retrieve their multi-million dollar killing machine. Max ekes out a living in a scarcely-recognizable 21st century Seattle, avoiding capture while trying to locate the brothers and sisters that fled from Manticore with her. Max’s search brings her in contact with underground cyberjournalist Logan Cale (Michael Weatherly), and together, they try to make Seattle a more palatable place while unveiling the secrets of Max’s past.Just as Max is a genetically-engineered hybrid of various people and creatures, Dark Angel has been stitched together from the remnants of various other genre television series and movies. The most obvious point of comparison is Buffy the Vampire Slayer, with its beautiful, sassy, headstrong, ass-kicking female lead, a predominately female supporting cast, and an older male mission-dispensing mentor with an answer to every question and a solution to every problem. Hell, both series have even had a recurring character named Kendra. Similarities can also be drawn to The Pretender, which features a gifted child raised in an isolated institutional setting and pursued in adulthood. Both series take every available opportunity to flash back to childhood and draw parallels to the present. The X-5s also bear a passing resemblance to the powerful young aliens of Roswell. Toss in a dollop of a Mad Max post-apocalyptic future for good measure, and you’re in the general ballpark.By the time I’d waded through the 90-minute pilot and the other two episodes on disc one, I was fully prepared to write Dark Angel off as a loss, resigning myself to wading through another thirteen hours of mediocrity. The feature-length pilot carried a hefty price tag, touted at the time as the most expensive ever produced. I’m not sure how much of that reported $10 million made it on-screen or was siphoned off to line James Cameron’s wallet, but the end result is plodding and dull. Thankfully, Dark Angel improves after these early fumbles, though the quality remains uneven throughout. For every decent episode, there’s one as dismal as Red or Haven. Douglas O’Keeffe has been cast in enough movies and TV series that someone out there seems to think he has some modicum of talent, but not a glimpse of it is on display in his embarrassingly inept performance as Bruno in Red. Bruno isn’t the only carryover from the pilot. A disturbing amount of footage appears in flashback form, making it the most shameless rehash outside of a Silent Night, Deadly Night sequel. Haven consists of 43 of the most painfully boring minutes I’ve spent in front of my television this year, and even the most staunch fans of the series seem to consider it pretty dreadful.Dark Angel was, at least in part, a victim of Fox’s determination to air sci-fi programming on Friday night, a timeslot that has claimed such genre casualties as Firefly, The Lone Gunman, M.A.N.T.I.S., Harsh Realm, Strange Luck, and VR.5. Despite not attracting enough viewers to warrant a third season, Fox’s home video arm has enough confidence in Dark Angel’s fan base to release both seasons of the series in relatively quick succession.Established fans of the series ought to find Dark Angel to be well-worth the modest asking price. As for the uninitiated, I wouldn’t recommend this set as a blind purchase. I’d suggest checking out at least a couple of episodes first, which admittedly might prove to be fairly tough seeing as how Dark Angel has been off the air for years now. If the premise sounds intriguing and you never got around to watching the series during its original run on Fox, I’d recommend this set.