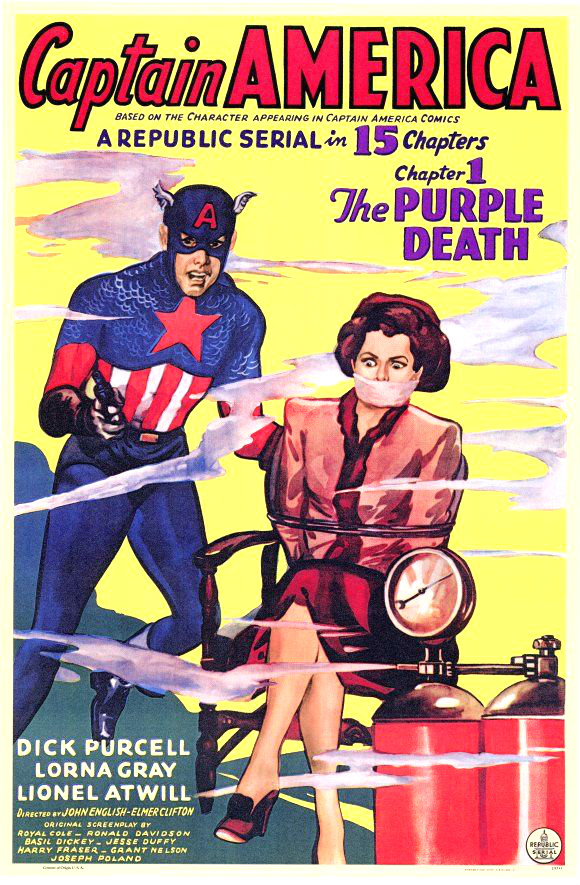 Captain America is a 243-minute collection of 15 serial episodes produced in 1944. The DNA of the story has been altered as to be completely unrecognizable: Gone are Steve Rogers and his military origins, along with the Nazis and Cap’s trademark shield. In their place is District Attorney Grant Gardner, who moonlights as Captain America, battling crooks and punching his way through local government bureaucracy. His main villain is The Scarab, a museum curator looking to scoop up mysterious artifacts, killing people left and right. Naturally, it’s easy to mock a serial from the 1940s.

And it’s really easy when Gardner (played by a porky Dick Purcell) puts on the Captain America suit and one can see Purcell’s glorious paunch of justice. Then it becomes less funny when you do some research and discover Purcell died from a weakened heart mere weeks after finishing the grueling shoot. As was the style of the time, Captain America was shot fast and quick. The fight scenes, of which the serial cobbles together about five minutes’ worth per episode, have a sort of ruthless workmanship you’d never see today. It’s all hokey and people throw chairs in the general direction of people, as opposed to directly at them.

There’s something incredibly charming about this Captain America. Nothing he does bears any resemblance to the Comics. It was fun to watch this form of pre-television entertainment. Illuminating, too: anyone who complains that modern movie audiences are only interested in mindless sensation should give this stuff a look. It’s shot with little artistic care, the dialogue is mostly stiff and colorless (save for a stray line like “That dame is wise to our setup!”), and the special effects are hilariously bargain basement, even for the period; everything here is in the service of non-stop action. It’s also really violent the swashbuckling, the rope-swinging, the classic archetypes – and reassembled them with considerably more stylistic flair. Still, Captain America is worth checking out for a goofy example of the kind of stuff that thrilled the kiddies in the decades before more sophisticated superhero fare hit the big screen.