Colleen Collette and Colleen McKenzie are two average 15-year-old girls that spend their days studying yoga with their guru, Yogi Bayer, and working an after-school job at a Manitoba convenience store called Eh-2-Zed. The two are invited to a party by a popular senior, Hunter Calloway, who is the object of Colleen M’s affections.

The next day at school, the girls’ history teacher informs the class that the Nazi Party once had an influence in Winnipeg. Led by the self-proclaimed “Canadian Führer” Adrien Arcand and his right-hand-man, Andronicus Arcane, the Canadian Nazis were once a great force of terror. Arcand was later arrested by Federal authorities, but Andronicus Arcane was never found.

Colleen C’s father Bob, who own the Eh-2-Zed, and his girlfriend Tabitha, the store’s manager, decide to take a spontaneous trip to Niagara Falls, leaving the girls to run the store on the night of Hunter’s party. The Colleens invite Hunter to bring the party to the store so that they won’t miss out. Colleen M escorts Hunter to the back room at his request, only to discover that Hunter and Gordon are actually Satanists who wish to sacrifice and dismember the Colleens. Before this can occur, an army of little monsters called Bratzis (one-foot-tall Nazis made from bratwurst) attack and kill Hunter and Gordon. Using their yoga skills, the Colleens fight and defeat the Bratzis, but are soon arrested for the murder of Hunter and Gordon.

Legendary man-hunter Guy LaPointe, who had an encounter with the Colleens once before, arrives at the police station to interrogate the girls. Having obtained some of his own evidence of the Bratzis, he believes the girls’ testimony and wishes to help them prove their innocence. After sneaking them out of the station and taking them back to the Eh-2-Zed, LaPointe and the Colleens are knocked unconscious by the Bratzis. They are taken to an underground lair beneath the store where they find the Bratzis’ master, Andronicus Arcane.

Arcane reveals to LaPointe and the Colleens that he once had dreams of becoming an artist. After having his work ridiculed by various critics, he decided to become a scientist for the Canadian Nazi movement. The Nazis hid him in the underground lair to create a clone army to conquer Canada and the United States. The clones, made from bratwurst and Arcane’s DNA, needed to incubate for 100 years before they were fully grown, so Arcane cryogenically froze himself until a time where he and his clones could rise again. This process was interrupted when a power outage at the Eh-2-Zed 70 years later caused Arcane to thaw and the clones’ incubation to stop, rendering them at just one foot in height.

Learning that the Nazi Party had long since been defeated, Arcane began a new mission to kill all critics as revenge for those that poorly reviewed his early work. He reveals he has constructed a ten-foot-tall goaltender from body parts of the Bratzis’ victims to carry out his murderous deeds. This “Goalie Golem” is controlled by the Bratzis who operate it from its insides. No longer wishing to follow Arcane’s orders, the Golem kills him and then turns on the Colleens. The Colleens once again use their yoga skills to defeat the Golem and soon after, clear their names. After being dubbed “Hero Clerks” by the media, the Colleens return to their normal lives and end the film with a cover of “O, Canada”, accompanied on guitar by Guy LaPointe.

Overall, I enjoyed the movie. It had much of Kevin Smith’s normal humor and those girls really had great chemistry as best friends.

Michael Parks (Red State)
Justin Long (Jeepers Creepers)
Génesis Rodríguez (Hours)
Haley Joel Osment (A.I.)
Johnny Depp (Into The Woods)
Harley Morenstein (Holidays)
Ralph Garman (Ted)
Jennifer Schwalbach Smith (Now You Know)
Harley Quinn Smith (Supergirl)
Lily-Rose Depp (The Dancer)
Zak Knutson (Clerks II)
Scott Mosier (Free Birds)
Best friends Wallace Bryton and Teddy Craft host the popular podcast The Not-See Party, where they find and mock humiliating viral videos. Wallace announces plans to fly to Canada to interview the “Kill Bill” Kid, an Internet celebrity famous for severing his leg with a samurai sword. In flashbacks spread throughout the film, it is revealed that Wallace was originally a failed stand-up comic who became popular with his increasingly vicious podcasts, and that he frequently cheats on his girlfriend, Ally.
Upon arriving in Manitoba, Wallace is surprised to learn that the Kill Bill Kid committed suicide. Upset that he flew to Canada for nothing, Wallace decides to stay an extra day and find another person to interview. He finds a handbill from someone offering a room in his home for free and the guarantee of hearing a lifetime of interesting stories. His interest piqued, Wallace arrives at the mansion of Howard Howe, a retired seaman in a wheelchair. Howard tells the story of how a walrus, whom he named Mr. Tusk, rescued him after a shipwreck. Wallace then passes out from the secobarbital laced in his tea that Howard made for him.
The next morning, Wallace wakes up to find himself strapped into a wheelchair and his left leg amputated. Howard tells him he was bitten by a brown recluse spider and a local doctor had to amputate it to save Wallace’s life. Howard not only reveals that he can still walk, but lays out his plans for Wallace: he plans to fit Wallace into a perfectly constructed walrus costume. Wallace’s attempts to contact Teddy and Ally fail when neither answer their phone. It is then revealed that Ally and Teddy are in fact lovers. Wallace leaves Ally a voicemail apologizing for how he treated her, and Howard knocks him unconscious.
Now aware that Wallace is in danger, Ally and Teddy fly to Canada to look for him. Back at the mansion, Howard continues to mutilate and alter Wallace, to whom he tells his backstory: a Duplessis orphan, he was sexually abused for years by the clergy who fostered him, and as a result is very misanthropic. He sews Wallace into a walrus costume made of human skin, complete with tusks made of the tibia bones from Wallace’s severed legs.
A local detective puts Ally and Teddy in touch with Guy LaPointe, a former Sûreté du Québec inspector who has been hunting Howard for years. LaPointe reveals that Howard, nicknamed “The First Wife”, has been kidnapping and murdering people for years; he says he believes Wallace may still be alive, but not as they remember him. They eventually find Howard’s address through two convenience store clerks, whom Wallace had annoyed earlier.
By now, Wallace’s psyche has been completely broken and has been conditioned to think and behave like a walrus. Howard reveals that his obsession with walruses comes from killing and eating Mr. Tusk six months after living on the island, although a rescue boat arrived soon after. For the past 15 years, he has attempted to turn his victims into his beloved savior in order to relive their last day and give Mr. Tusk another chance at survival. Dressed in his own homemade pelt, Howard engages in a fight with Wallace that ends with Wallace angrily impaling Howard’s chest with his tusks while Howard becomes satisfied with what Wallace has become. Ally and Teddy enter the enclave as Wallace bellows victoriously and viciously as a walrus does, much to their horror. LaPointe later enters the room and reluctantly aims a shotgun at Wallace. 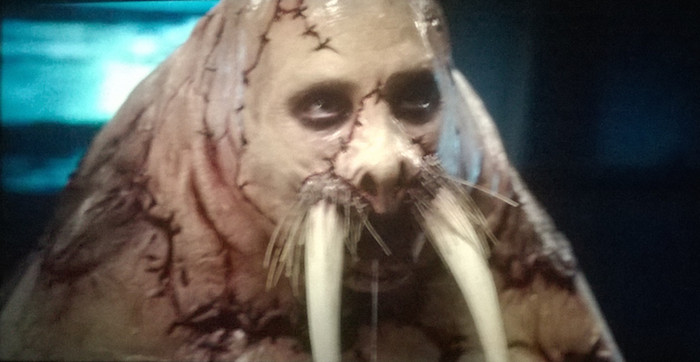 One year later, Wallace, still sewn into the pelt, lives in a wildlife sanctuary. Ally and Teddy visit him and feed him a mackerel. Ally remembers a discussion she had with Wallace the day before he left for Canada about how crying separates humans from animals, because crying shows that you have a soul. Ally tells Wallace she still loves him before walking off crying. Tears run down Wallace’s face as he bellows, implying that the human part of Wallace may not be completely gone.Yes, it’s a weird film but it’s trying to be different and is a nice change of pace from most horror films these days. If you want a film that will make you genuinely say ‘WTF’ at the end, tusk is for you. I