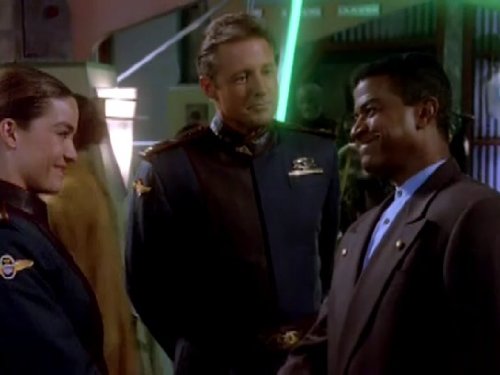 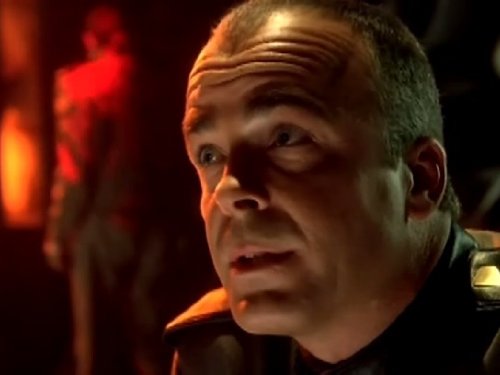 Nothing encapsulates the power of the epic science fiction series Babylon 5 better than its voiceover for the credits. In Season 3 it is Commander Ivanova who speaks: “The Babylon Project was our last, best hope for peace. It failed. But in the Year of the Shadow War, it became something greater: our last, best hope… for victory.” 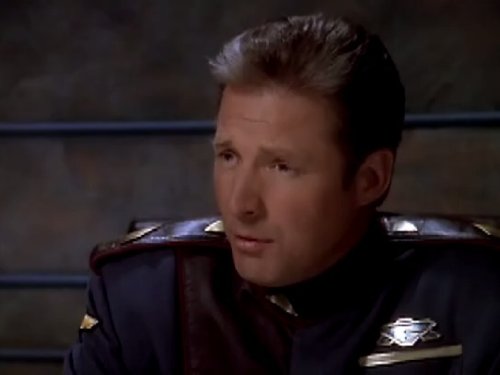 Setting the traditional episodic format of television science fiction on its head, the five-year continuous story arc of Babylon 5 built up a fascinating and captivating story through Season 1 and Season 2. The Narn and Centauri at each others’ throats… the lurking danger of the Shadows… the growing darkness in the Earth government… the unrest on the Mars colony… all these elements have been building up and sending off sparks. The question has been, what is going to blow first? It’s for good reason that the season as a whole is titled “Point of No Return.” There is no reset button on Babylon 5… and actions taken in the past are having the most dramatic of consequences. 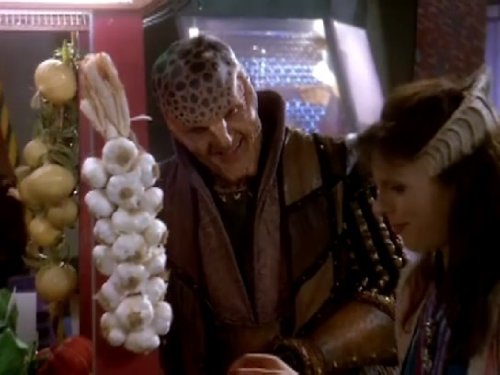 Season 3 packs the most punch of any season of Babylon 5 so far… and that’s saying a lot, given the series’ strong start in Season 1 and escalating drama and tension in Season 2. In Season 3, several story lines come to the forefront, with events that have been picking up steam now coming to an explosive level. The political conflict back on Earth has resulted in increasing social repression even on the station, as we see in the appearance of the Night Watch organization; a string of tense episodes like “Messages from Earth,” “Point of No Return,” and “Severed Dreams” shift that story line into high gear. At the same time, the war with the Shadows goes from being a vaguely disturbing threat to a terrifying reality, in episodes like “Interludes and Examinations,” the two-part “War Without End” that picks up on certain mysterious events from Season 1, and, of course, the season finale “Shadow Dancing” and “Z’ha’dum.” It’s a clear sign that Straczynski’s techniques of foreshadowing and careful buildup are effective, when just the title of the final episode is chilling… 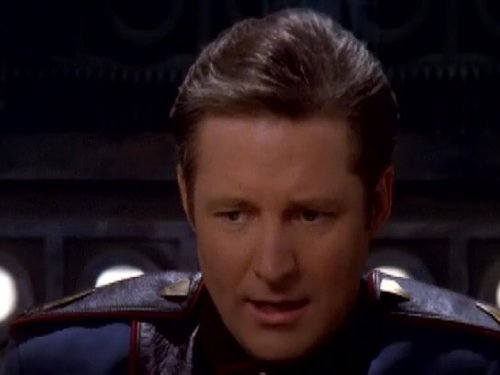 The focus may be on the Shadows and the troubles on Earth, but in the background, other storylines continue to develop. The Narn-Centauri war continues to build up pressure, with late-season episodes like “And the Rock Cried Out, No Hiding Place” leaving us eager for Season 4. The continuing thread concerning the telepaths also finds its place into Season 3’s episodes; in addition to the return of Lyta Alexander, we also see Psi Cop Bester (Walter Koenig) once again. 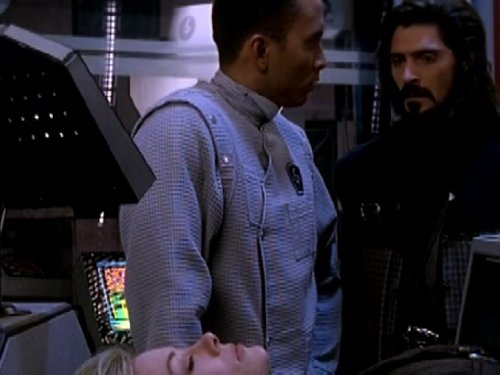 For this season, all 22 episodes were written by series creator J. Michael Straczynski: with so many plot threads being developed, along with others being foreshadowed for the future, this was the only way to manage all the material properly. Given the impressively high quality of the episodes throughout Season 3, this was an excellent decision on the part of the series creator. 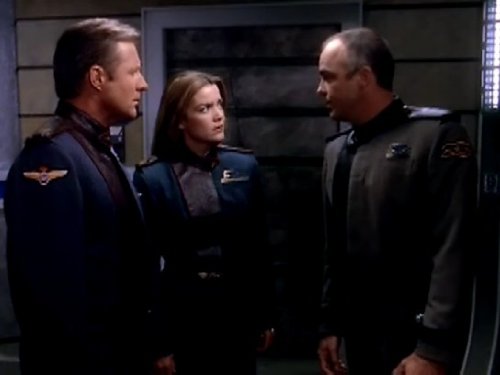 Of course, not every single episode is up to Babylon 5’s high standard: Season 3 does include “Grey 17 Is Missing,” with a lamentable monster called a Zarg making an appearance. Straczynski himself has commented (as quoted in the Lurker’s Guide to B5) that “I just have this constant desire to go to everyone’s house and personally apologize…” Once you see the Zarg, you’ll see why. But even in this episode, the other storyline interwoven with the Zarg storyline is handled satisfactorily, and as a whole it merely serves to underline just how good the rest of the episodes are. 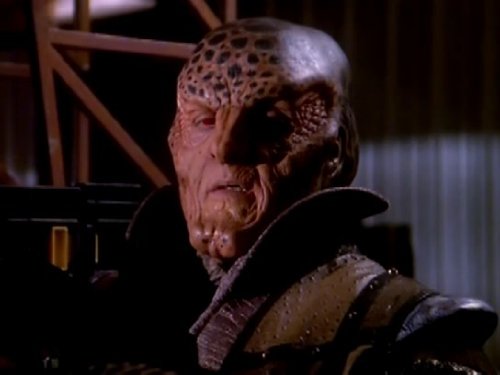 On a more individual level, Babylon 5 continues to develop its characters very effectively: these are not static personalities, but real, changing people. I’ve always considered the duo of the Centauri ambassador Londo Mollari (Peter Jurasik) and his nemesis, the Narn ambassador G’Kar (Andreas Katsulas) as being the characters with perhaps the most depth in the series, and this is borne out as we see them each traveling his (perhaps foreordained) path. Another instance of character development is Dr. Franklin; while earlier seasons hinted at tensions beneath his professional demeanor, it’s here that those tensions finally come to the boiling point, as we see in episodes like “Walkabout.” The cast of “main characters” is slightly fluid, with various figures naturally moving into the limelight or out of it as the overall story arcs dictate: in Season 3, the characters of Zack Allen, the down-to-earth security officer, and Mr. Morden, the very shady “associate” of Ambassador Mollari, are brought more into the action. In Season 3, we are also introduced to several new characters who will prove to be important contributors to the story as it develops: Lyta Alexander (Patricia Tallman), who is not exactly new (having appeared in the pilot), and one of my favorite secondary characters, Marcus Cole (Jason Carter). 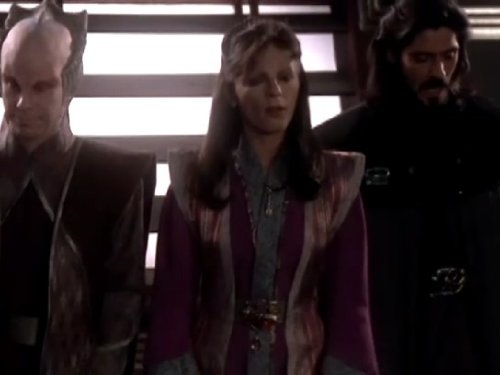 Season 3’s powerful storylines draw extensively on the material presented in the first two seasons, both in plot and in character development, so for maximum enjoyment, viewers who are new to Babylon 5 should start with Season 1 or at most Season 2. But whatever you do, don’t miss out completely! Babylon 5 is the cream of the crop of science fiction television. If you thought Season 2 was exciting… Season 3 is even better. 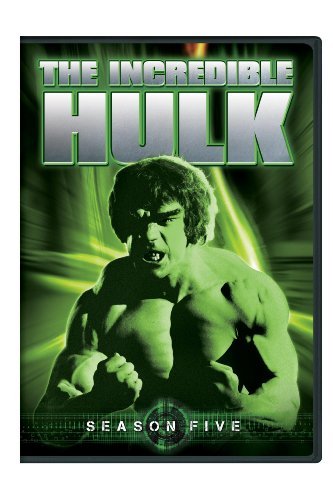 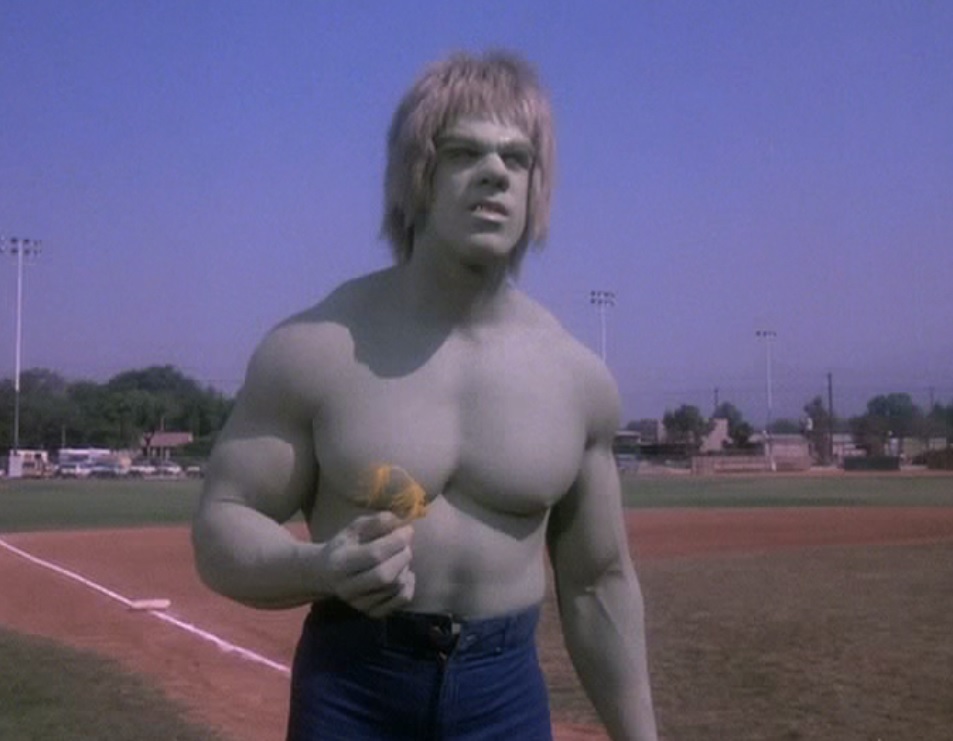 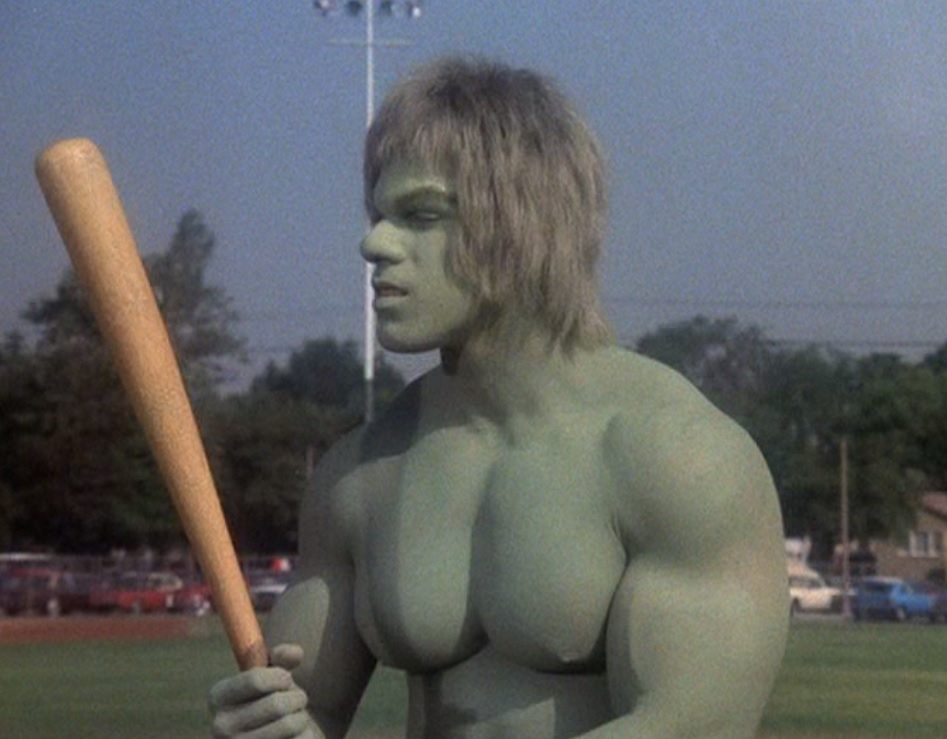 After watching the fourth season it’s not too difficult to see why the series was cancelled early on in the fifth. With only seven episodes to its name, the final year is a sore spot compared to the earlier ones, which featured many highlights. 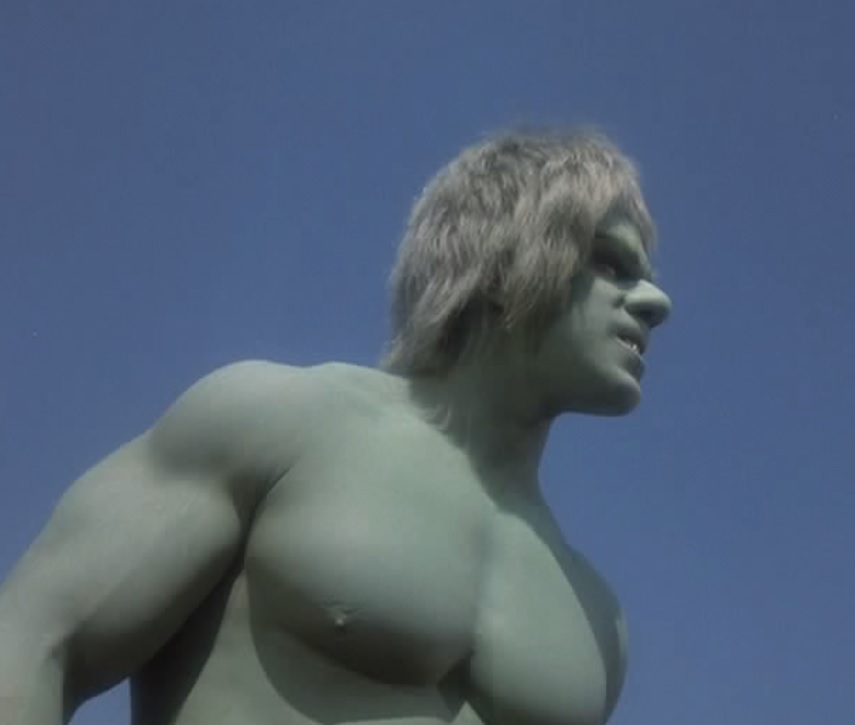 The episodes here simply weren’t very entertaining, most were poorly written, and even the actors didn’t seem as invested in it. It’s a shame that the series couldn’t have found a suitable ending and that it ended with such a whimper, but while it lasted it was a comic lovers dream come true. 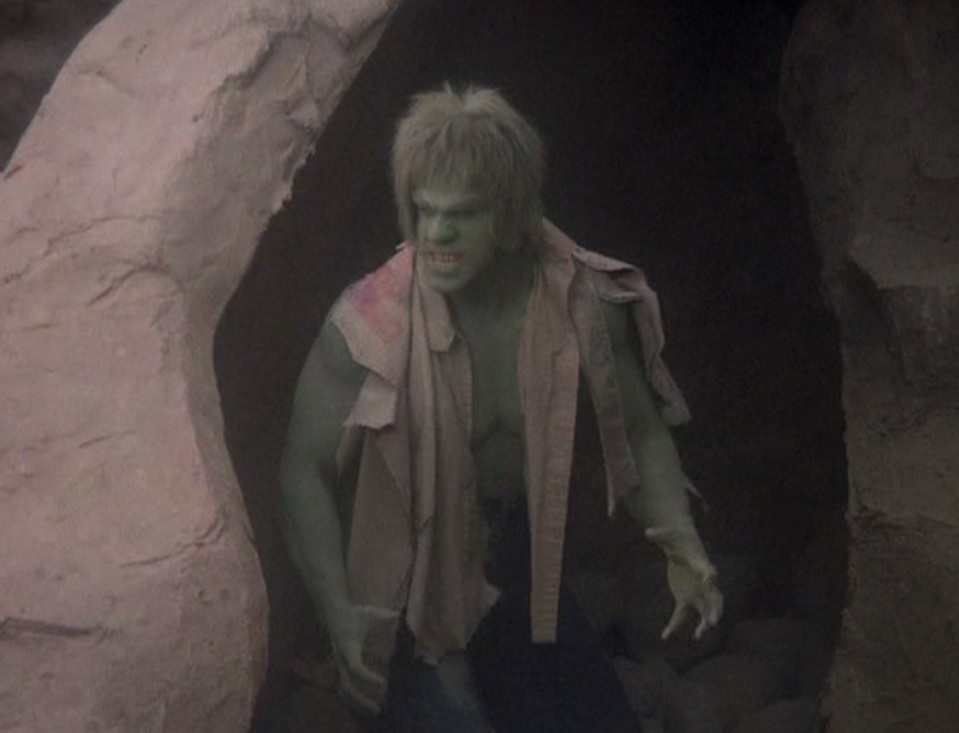 Even if you weren’t into the comic, The Incredible Hulk was quite a show for the time it was released. The dark nature of the program coupled with Bixby’s acting skills and some “decent” writing presented a unique television experience that became an icon. While the later seasons of the show definitely weren’t the best, the first three seasons were rock-solid entertainment. 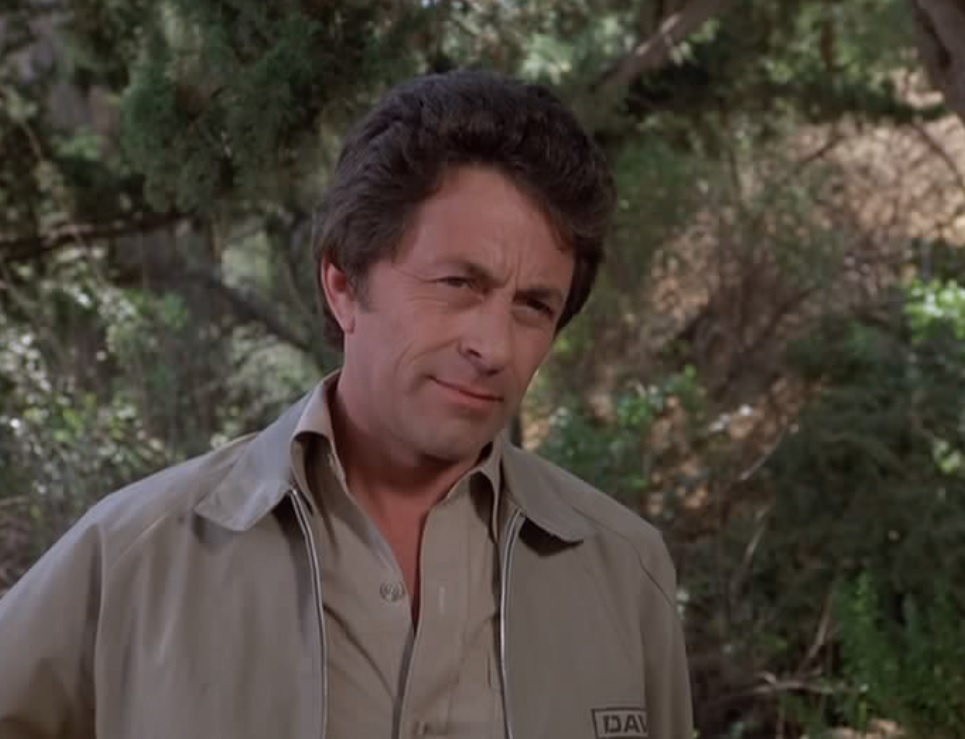 Tuning in each week to see David turn into the Hulk was a hoot and reliving the show again thirty years later proves to be a nice nostalgic trip into the history of everyone’s favorite green giant. 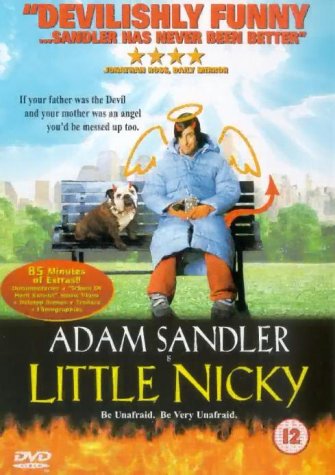 The story revolves around a struggle to determine which of Satan’s (Harvey Keitel) three sons will succeed their father as ruler of Hell. Adrian (Rhys Ifans) is the most intelligent, Cassius (Tom Lister Jr.) is the toughest, and Nicky (Adam Sandler) is their father’s favorite, even though Nicky has had a speech impediment and a disfigured jaw since Cassius hit him in the face with a shovel. Furthermore, Adrian and Cassius enjoy tormenting Nicky by claiming that his mother was a goat and assault him by controlling his body with their minds.

Having been the “prince of darkness” for ten thousand years, Satan assembles his sons to decide which of them will succeed him, but instead he keeps the throne for himself because his sons are not yet ready to be his successor and tells them that they need to learn to keep the balance between good and evil. Angered by this decision, Adrian and Cassius go to Earth to create a new Hell by possessing religious and political leaders in New York City. As they leave, they freeze the entrance to Hell, preventing more souls from entering and causing Satan’s body to begin decomposing via his body literally falling apart. To stop Adrian and Cassius, Satan sends Nicky to Earth with a silver flask that traps whoever drinks from it inside.

At first, Nicky has trouble staying alive on Earth. He is killed several times, landing in Hell and returning to New York each time. While learning how to eat and sleep, he meets a talking bulldog named Mr. Beefy (voice of Robert Smigel) (a friend of Nicky’s father), rents an apartment with an actor named Todd (Allen Covert), and falls in love with a design student named Valerie (Patricia Arquette).

Nicky’s first encounter with his brothers occurs when Adrian sees him with Valerie, takes mental control of his body and makes him scare her away. Then Nicky sees Cassius on television, possessing the referee (Dana Carvey) of a Harlem Globetrotters game. When he goes to the court and tricks Cassius into the flask, metalheads John (Jonathan Loughran) and Peter (Peter Dante) are so thrilled with his performance that they become his devoted fans. That evening, Nicky tries to apologize to Valerie. The meeting goes badly at first, but she accepts him after he explains who he is and why he is on Earth.

The next day, Adrian possesses the chief of the NYPD (Michael McKean) and accuses Nicky of mass murder using a rather badly edited scene from Scarface. Not knowing what to do, Nicky has Todd kill him so he can go back to Hell and ask his father for advice, but his father has trouble hearing because his ears have fallen off and his assistants are in a panic because the midnight deadline to capture Adrian and Cassius is only hours away. Back on Earth again, Nicky and his friends devise a plan to capture Adrian in a subway station; John and Peter inform the chief of the NYPD of Nicky’s whereabouts which leads to Todd and Mr. Beefy being arrested. While waiting for Nicky, Adrian discovers their trick when he realizes that John is keeping cool whereas Peter isn’t which leads him to realize that John is being possessed by Nicky. In the ensuing fight, Adrian grabs Valerie and dives onto the track as a train approaches, but Nicky throws her out of the way, leaving himself and Adrian to be killed by the train.

Arriving in Hell just minutes before midnight, Adrian dethrones his weakened father and takes over, rising into Central Park and starting a riotous party while all of the demons except Satan’s assistant Jimmy (Blake Clark) join Adrian on Earth. Meanwhile, Nicky wakes up in Heaven as a reward for sacrificing himself and meets his mother Holly (Reese Witherspoon), an angel who tells him he can defeat Adrian with the “inner light” that he inherited from her. After she gives him a mysterious orb, he goes to Central Park. The demons discover Nicky and try to attack him, but Nicky creates gifts for them which makes them respect Nicky enough to join him and stop Adrian, but they all run away when Adrian kills one of them. Nicky and Adrian then fight, which results in both of them sucked into the flask where they have a three-way battle with Cassius. Adrian appears to win a pitched battle by locking Nicky in the flask and turning himself into a bat, but Nicky (with Valerie’s help) escapes from the flask. When he shatters the orb, Ozzy Osbourne appears, bites Adrian’s head off and spits it into the flask (that scene was inspired by an actual incident in which Ozzy bit the head off of a real bat while on stage).

With his brothers captured, Nicky is ready to save his father. After he sins to make sure he goes to Hell by setting bees on Henry Winkler, he and Valerie express their love for each other and she kills him with a boulder given to her by Ozzy. With the flow of souls restored in Hell, Satan regains his body and recommends that Nicky go back to live on Earth. As for punishment, Adrian and Cassius (still inside the flask) are shoved up Adolf Hitler’s rectum. The film ends a year later, when Nicky and Valerie live in New York with their infant son, Zachariah. In in afterword in which what happens to the characters, it is mentioned that John and Peter have died in a plane crash and are now happily living in Hell in Nicky’s old bedroom.An absolutely brilliant and ingenious comedy.