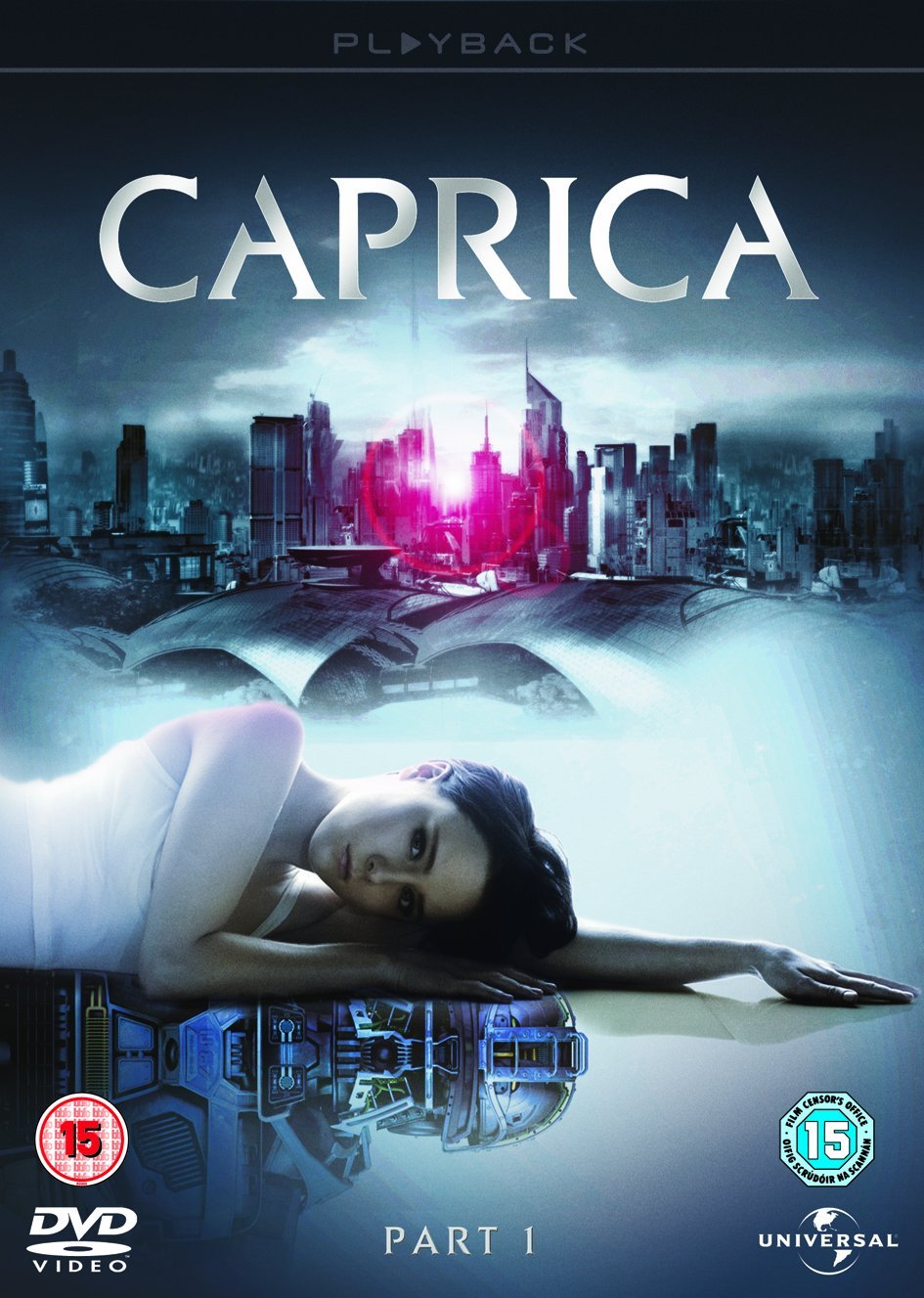 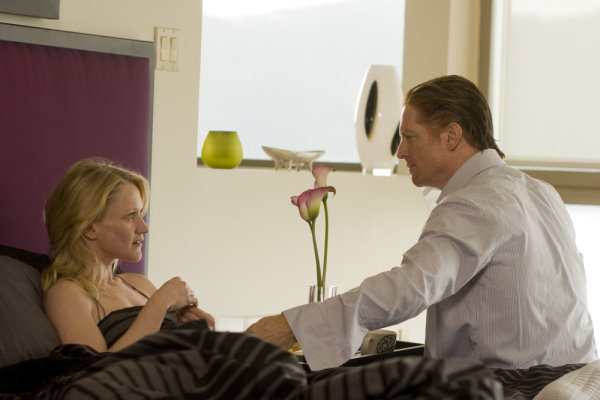 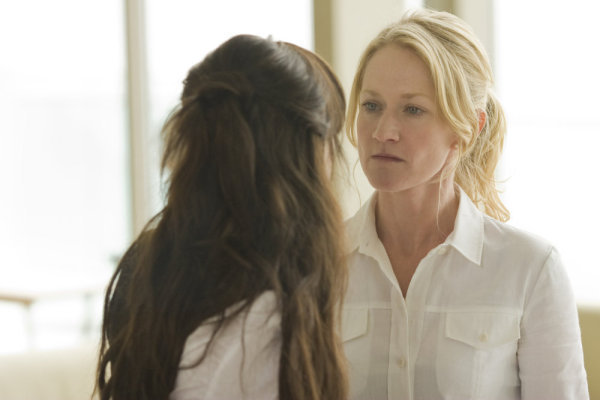 Creators Ronald Moore and David Eick relied on three key components for their hit SyFy series, Battlestar Galactica, to stay fresh and compelling for as long as it did: complex ideas behind evolved sentient lifeforms, religious parables, and the fondness for the characters’ home worlds — especially that of Caprica. The characters all look back at their previous lives almost as ghosts; Admiral Bill Adama painfully drudges up memories of his ex-wife and lawyer father, while Kara “Starbuck” Thrace carries memories of her small, ramshackle apartment and Samuel Anders yearns for the thrill of a sports stadium. Seems like such a rich mythos created just to be the ruminants of a past life, doesn’t it? The Moore-Eick team also sees this potential, now capitalizing on the gap left by Battlestar Galactica’s end to create the appropriately-titled Caprica. Though it moves slowly at first while constructing an involved narrative framework in its predecessor’s shadow, this mythos-rich offshoot eventually finds the footing needed to fall in-line with the original series’ current of storytelling. 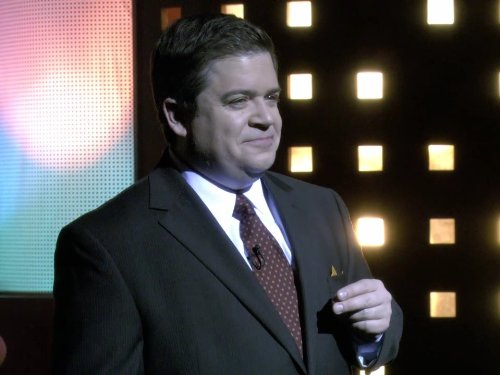 The story revolves around the polytheistic, technologically-advanced colony of Caprica roughly sixty years before “the downfall”, focusing on the conflict between, and within, two families: The Graystones, and the Adamas Adams. Lawyer Joseph Adams (Esai Morales) lives a somewhat normal life with his wife and two children, Tamara and Billy, attempting to juggle his high-profile stature in the legal realm with his domestic life. He fights a bit with keeping himself as distanced as he can from his unsavory lineage, the Tauron mob Ha’la’tha, though it’s hard since the organization funded his education and requires his services regularly — usually by messages delivered through his brother, Sam (Sasha Roiz). BSG devotees with get a jolt in seeing the blossoming of young “Billy” in this environment early on, watching the growth of the semi-troubled youth that’d transform into the disquieting, powerful Galactica commander Bill Adama. 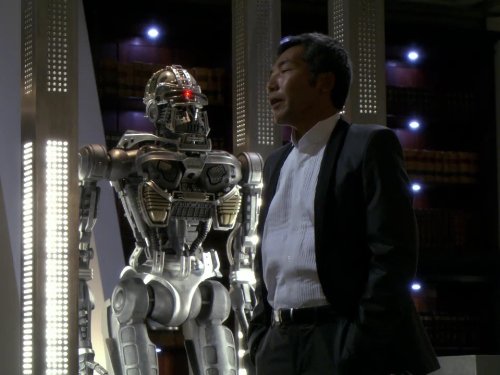 Caprica’s central draw, however, is the Graystones. Daniel Graystone (Eric Stoltz) heads a tech development firm working on a mechanized super-soldier that’s just not cutting the mustard, all the while generating profit (60% of net, to be exact) with virtual reality headsets — holobands — that connect to a network of fully-interactive, realistic digital worlds. Graystone’s seemingly safe digital construct quickly broke down into a laissez-faire underground, filled with hacked sections that exploit sex, drug-use, and violence. Daniel’s daughter, a silver-tongued high-school student named Zoe (Alessandra Torresani) who battles with her mother Amanda (Paula Malcomson) over authority, frequents the holoband V-Club with boyfriend Ben (Avan Jogia) and timid best friend Lacy (Magda Apanowicz), yet they’re beyond the carnal satisfaction that the place has to offer. Instead, they’ve found purpose in monotheistic religious belief within an activist organization, the Soldiers of The One (STO), and, in the process, created an exact digital copy of Zoe who will somehow aid the resistance. 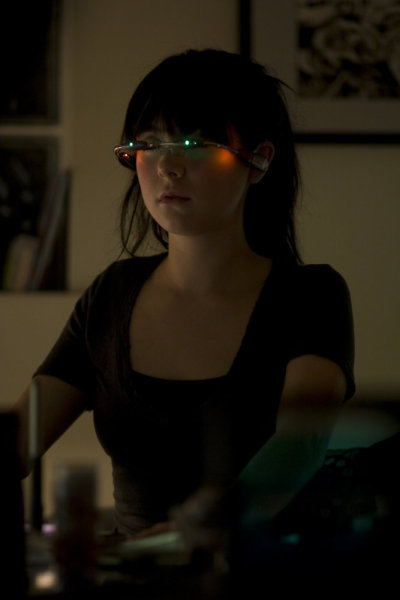 Observant fans will see where Caprica’s going with the duplicate Zoe, coming together in an introductory pilot that realizes the germ of an idea behind the genesis of the Cylon race, but it certainly doesn’t leave newcomers in the cold. Moore and Eick, with this freshness in mind, go in a startling direction with the content surrounding the Cylon conception; a murderous STO-related terrorist attack on a train rattles the city of Caprica, leaving the Graystones without their daughter and Joseph with only his son, Billy. The grief they endure becomes a convincing dramatic catalyst for what’s to come, breaking a floodgate for aggressive decision-making regarding family memories and Daniel’s technological advancement — with the idea of an exact digital replication of both mind and memory, such as the avatar of Zoe that lingers after her death, propelling it forward. It’s a thought-provoking launch that tackles some rather challenging concepts, including that of the human psyche as raw data and the extent that open-minded intellectuals might go to preserve those they’ve lost. And, of course, the narcissistic power behind potential immortality. 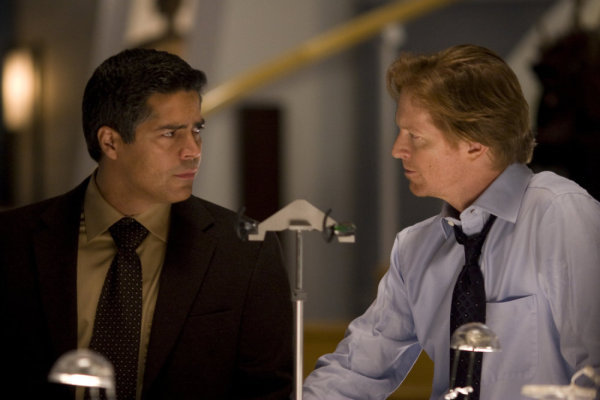 Upon the second episode, “Rebirth”, one fact becomes very clear: Caprica isn’t cut from the same cloth as its inspiration, instead existing as a compelling new creation with its own hurdles to cross. In retrospect, the reimagined Battlestar Galactica painlessly continued the momentum from its original two-part miniseries, thrusting forward with space warfare and political components into the dazzling episode “33”. With Caprica, a shrewd character-driven thriller with complexity surrounding terrorism and family grief, the carry-over isn’t as easy. Thankfully, the Moore-Eick team never shies away, hitting the gas with some rather incisive writing as they drive deeper into Caprica’s unraveling and the Graystone company’s waning success in the wake of the terrorist attack. Along the way, they also grapple with themes of Tauron racism (“dirt eaters”) and religious extremism through the STO and one of its leaders, Zoe’s teacher Sister Clarice (Polly Walker), that correlate to actual issues, while also cleverly using the concept of a digital underground — especially in the anarchistic “New Cap City” game simulation, a mix of World of Warcraft and Grand Theft Auto — as a way of escape and purpose-finding. 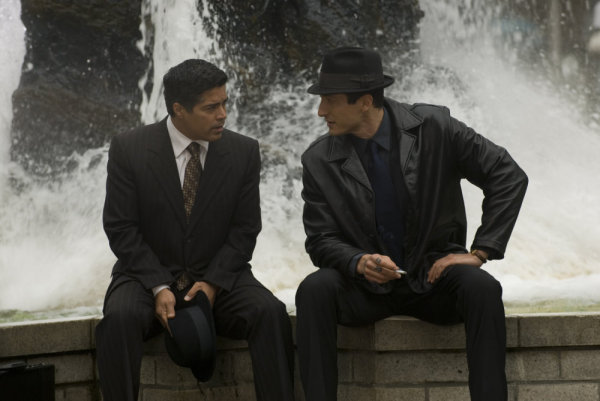 Yet as Caprica focuses on these modern analogous ideas while its characters develop into a mixture of morally desolate entities, the first batch of six or so episodes move at a deliberate, slow-burning tempo that shifts between intrigue and sluggishness. The harsh chemistry between Daniel and Joseph as scorned parents electrifies, driven by Eric Stoltz and Esai Morales in two stark, authentic performances, and the pacing focuses on the causal events that unfold around their family-affecting decisions. But focusing on this calculated slow-burn can, at times, temper the series’ manner and cause the multiple plot threads to stray from the course, weaving intuitive dramatic performances around a lot of existential meditation and shots of neo-religious content without the right energy to propel it forward. I still find it compelling; the depth of Daniel’s egotism reaches a genuine depth that’s unexpected, while offering a cluster of explosive moments — such as the board meeting in “There is Another Sky” that actually starts the Cylon race — spliced within the persistent, astute drama. 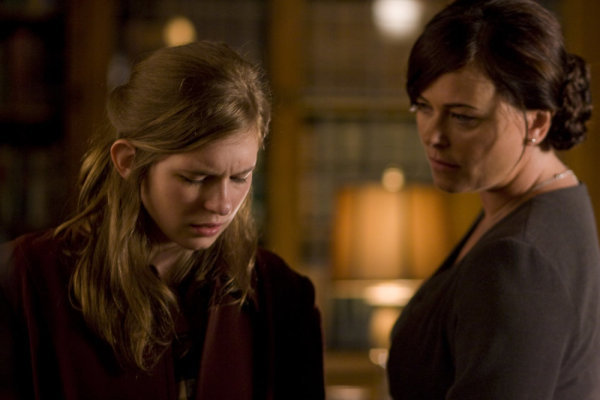 Then, as Caprica approaches “Ghosts in the Machine” and the mid-season finale “End of Line”, the gradual tension sees a much-needed outburst. These prior episodes extend into what’s essentially a rather lengthy fuse leading to this batch of dynamite, using brewing family turmoil and growing suspicions into an emotionally-taxing, brilliantly-realized culmination point. “Ghosts in the Machine” plays with the intensity of psychological torment in a staggering rush of emotion, while “End of Life” finds the first episode of the series to use the familiar “__ Hours Before” time mechanic frequently used in Battlestar Galactica. Quite simply, the build-up becomes worth the time at this point, igniting the series with the narrative outbreak it desperately lacked to become fully involving. Whether Caprica can maintain this momentum still remains to be seen, but the succession of these explosive developments that derive from subtly-evolving plot points — Amanda’s weakening sanity, Daniel’s obsession with meeting the development deadline, and the presence of the STO as violent radicals — satisfies with evocative, edge-of-your-seat chills at this midpoint, finally achieving that addictive science-fiction adrenaline that hallmarked its predecessor.

The first season of Marvel’s Jessica Jones was a kind of miracle, combining a taut and entertaining superhero narrative with one of the most nuanced explorations of domestic abuse and sexual violence ever put on screen. Krysten Ritter’s prickly, guarded, hard-drinking Jessica is a female superhero with unique significance. Her very existence—a woman with literal super-strength who still fell prey to a male predator—skewers accepted narratives about victimhood, while her determined independence cuts through expectations of how women are “supposed” to act after assault.Ritter’s performance in the second season is a few degrees more emotional, as Jessica—prompted by her best friend Trish (Rachael Taylor)—finally begins to set in the trauma of her past. That trauma encapsulates not only Kilgrave’s abuse, but the car accident that killed her family and landed her in a hospital where mysterious, horrific, superpower-inducing experiments were conducted on her. And she’s not sad or scared about what was done to her; she’s furious. In an anger management support group she reluctantly attends, participants bounce a ball against the wall to relieve stress while they share their stories. Jessica bounces it so hard she smashes a hole in the wall, before confirming: “Still angry.” Female anger is often stigmatized; women put on a calm face for fear of being labelled crazy or hysterical or a bitch. To see it expressed so openly and so often in a Netflix comic-book adaptation feels faintly revolutionary.That’s also true of the new season’s handling of Jessica’s sex life. When a midtown douche notices Jessica in a bar and leers—“Nice ass”—she wheels around and snaps, “What did you say?” Surely she’s about to kick his ass, you think. Smash-cut to: Jessica having joyless sex with this loser in a bathroom stall, her face a mask, her detachment painfully clear. It’s a stark contrast to her passionate clinches last season with Luke Cage (Mike Colter), which served to show that being raped did not define her. Then, sex was a way in which she reclaimed her body and her selfhood; now, it’s a way for her to dissociate. This coping mechanism is explored in greater depth following the introduction of her new love interest Oscar (JR Ramirez), a big-hearted family man who’s bewildered by Jessica’s resistance to intimacy.The plot thread driving the new season is Jessica and Trish trying to uncover the truth about 20 missing days from Jessica’s past: 20 days during which she went into hospital almost dead, and emerged with superpowers. Though she has total amnesia about this time, it gradually becomes clear that her origin story is similar to that of this season’s Big Bad (played by Janet McTeer), a mysterious, preternaturally strong young woman who was subjected to the same experiments as Jessica, and came out a “monster.” The presence of a super-powered villain terrorizing New York yet again only heightens the public backlash against “supers,” although the bigotry faced by Jessica and others like her is the one place where the show’s allegories feel clumsy, particularly in a scene where someone pointedly refers to “you people.”While the new season—at least for its first five episodes—lacks a threat as propulsive and engaging as Kilgrave, its ensemble also feels better served. Carrie Anne Moss’s steely, high-powered lawyer Jeri Hogarth, by now a mainstay of the Marvel TV universe, is propelled in a rich, moving new direction by some unexpectedly brutal news. And Trish’s history as a child star takes on new complexity when she’s forced by necessity to seek out a producer who assaulted her when she was a teenager. The moment in which Jessica confronts this particular creep, and denounces “pricks like you who think you can take whatever, or whoever, you want” would have been a thrill no matter the context, but in this Time’s Up moment in Hollywood it’s a particularly cathartic standout. As a female superhero whose anger makes her powerful, and whose trauma has no impact on her strength, Jessica Jones has never felt more essential.