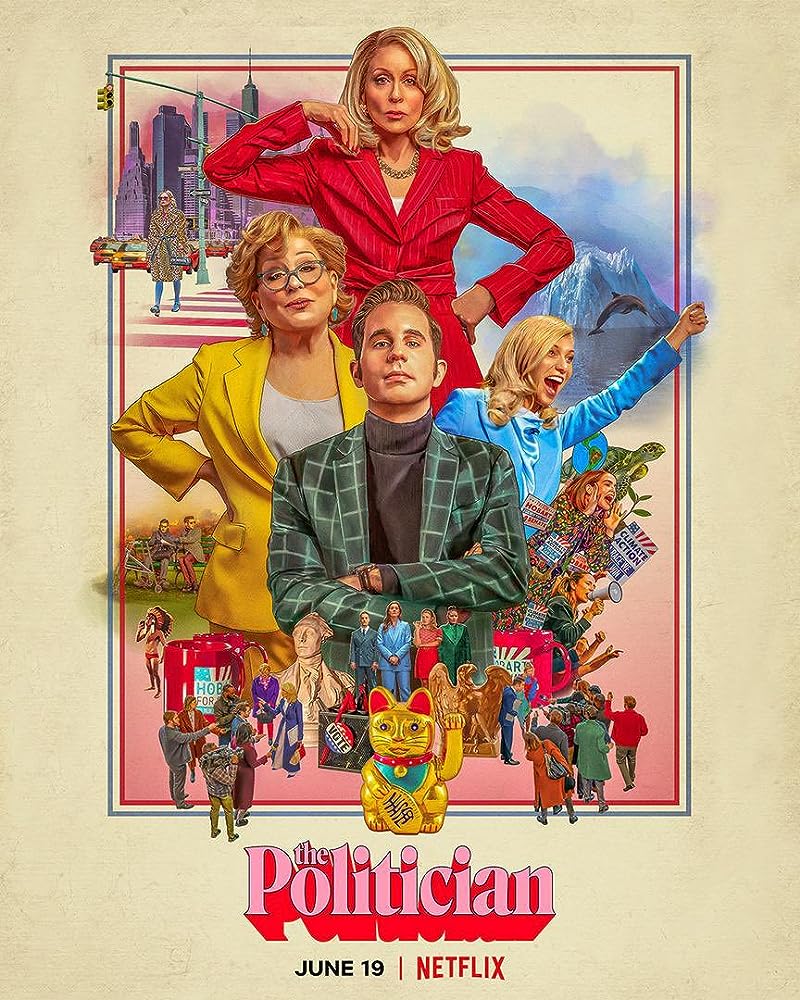 Between Black Lives Matter protests, coronavirus and the constant sense of impending doom, it’s easy to forget that 2020 is a presidential election year. But over on Ryan Murphy’s comedy The Politician, which returns to Netflix, an even bigger political battle is taking place: who will win the Albany state senate elections?

The show picks up three years later as he attempts to become state senator. In moving to the big(ger) leagues. Payton is no longer an obnoxious fish in a small pond, but a 22-year-old upstart taking on established liberal candidate Dede Standish (Judith Light) in the seat she’s held for more than 30 years. Payton is continuously underestimated by Dede and her right-hand woman Hadassah Gold (Bette Midler), but sees things swing his way as, like an excessively privileged AOC, he inspires young people to register to vote for the first time.

It’s a smart move that opens The Politician up to another world and breathes new life into old characters, with Payton’s friends no longer his lackeys, but people with their own motivations. And then there’s Light and Midler, who are a delight. While we watch Payton tiptoe around trying to prove that Dede’s views are “outdated” without being accused of ageism towards a woman in her seventies, they’re having threesomes, scheming and playing with “spicy lube”, frequently outshining Platt in what should be his story.

These are some of the series’s strongest moments. The show has always excelled at satirising people who exploit “woke” culture for their own personal gain, with cultural appropriation, zero-waste living and sex positivity all flitting between being Payton’s campaign platform and his biggest downfall. But these concepts are never mocked with actual cruelty. Sure, it’s a bit ridiculous to always carry around a glass bottle to avoid using plastic packaging and yes, cancelling an adult for a fancy dress costume they wore when they were six might be a bit OTT, but the big ideas they represent are presented in a positive, respectful light.

As Payton moves up in the world, old friends are naturally given less to work with, which is a shame in the case of his high-school running mate Infinity (Zoey Deutch). I don’t feel the same loss when it comes to Payton’s always oddly underwritten mother Georgina (Gwyneth Paltrow),  After his revisionist history Hollywood was met with a lukewarm reception, it’s good to see Ryan Murphy back at what he does best, garish colours, obnoxious characters, power suits and all.

Ryan Murphy has done it again,  But are we surprised? Nah, not at all. Starring Pitch Perfect’s Ben Platt, the incomparable Gwyneth Paltrow, American Horror Story’s Jessica Lange, along with many, many more comes this unique dark comedy. And when I say unique, I’m not exaggerating. The Politician has the classic Ryan Murphy vibes to it as it focuses on social/political commentary relevant to today’s world but adds a comedic, satirical twist to it.Platt plays a character by the name of Payton Hobart who was adopted into a wealthy family and has always had harbored very ambitious dreams of becoming the President of the United States one day. But before he can get there, he has to tackle the biggest hurdle of all–becoming President at his high school.Now, this show is nothing like you’d imagine. On the surface, it comes off as yet another coming of age story about a young kid with big dreams. This couldn’t be far from the truth. In reality, it’s a story about someone taking a treacherous path to achieve their dreams, even if it means betraying anyone and everyone around you (and boy, does that happen here).  I’m actually quite baffled at how Murphy and co. pulled off such a multi-layered series that possesses so much grit, commentary, and what I like to call, “in your face gut punches”. If you pay close attention while watching The Politician you’ll begin to make parallels to our political world today and get a very strange, but intriguing perspective on what it takes to get there.During this eight-episode first season, I was a bit skeptical when I initially began watching, unsure of where the story was taking us. It has a slow start to it that still keeps you engaged and addicted even when your mind is telling you otherwise. But the initial time invested has a great pay-off by the end of the first season–I promise. You’ll laugh. You’ll cry. You’ll be in awe of Murphy’s ability to create yet another socially relevant series. But most importantly, you’ll love Platt’s performance which is further enhanced by a supporting cast of equally talented individuals such as Lucy Boynton, Zoey Deutch, Laura Dreyfuss, and more. If you’re thinking to yourself how Platt and co. pull off playing high school students, I’ll be the first to tell you it’s actually pretty convincing. The entire time I was never jaded by the impossibility of the characters they are playing who are younger than they actually are. But it worked, and it worked great.The twists and turns the series takes do not prepare you for where the season eventually ends, but I promise, it’s a wild, fulfilling ride. I understand that The Politician may not be everyone’s cup of tea, but it was most certainly mine.