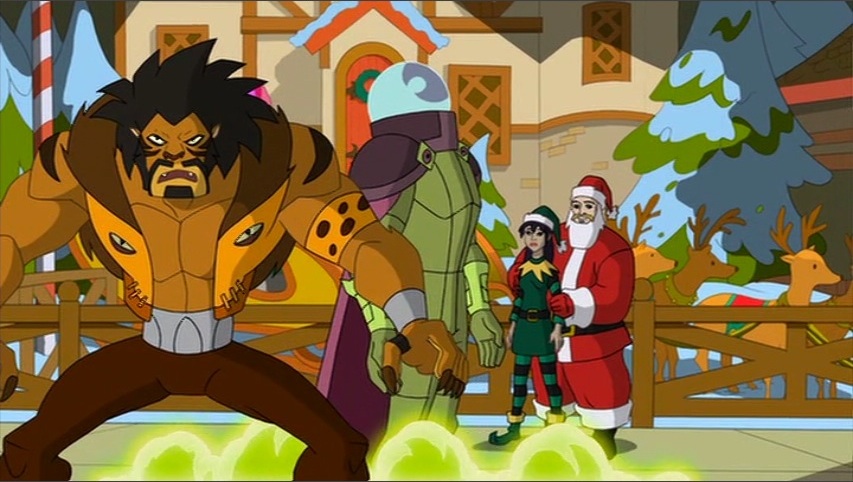 This show does not mess around when it comes to using any and all characters from Spider-Man’s history!  I was very impressed and excited to see fairly obscure criminal underworld characters Blackie Gaxton and Patch appear in this episode.  This episode featured the return of the Sinister Six, albeit in a new configuration, with Mysterio and Kraven standing in for Doctor Octopus and Shocker. With that many villains, it’s not surprising that this was an episode with a ton of action, as it quickly turned into one prolonged chase/fight scene for Spider-Man.I loved how this fight moved from one environment to another, traveling to some very different places, from an ice skating rink to a pier, to a department store. Once again, this show proved to be one of the best on TV when it comes to action scenes, with a ton of visually exciting moments that sometimes are so quick, they beg you to rewind the DVR. Such a moment occurred when Spider-Man jumped to avoid a bunch of hurled tires while fighting Electro – and while he dodged some, he actually contorted himself right through the center of one, in a blink and you miss it moment. This was an episode that really reinforced Spider-Man as a clever and creative sparring partner for any of the villains he takes on. Whether it be using those aforementioned rubber tires to trap Electro, or goading Rhino onto ice not strong enough to hold him, or spraying perfume on the scent-sensitive Kraven, our wall-crawling hero was in top form here and it was incredibly fun to watch.

On a more bizarre but no less entertaining level, you also had the moment where Mysterio unleashed his mechanical bats at Spidey, and they could be heard squeaking stuff like, “Rematch! Rematch!”, clearly eager to get another shot at the guy who had beaten them two episodes ago.

Understandably, an episode this action-heavy was a little light on character moments, but the ones we got were solid. Peter’s already stuck debating between Liz and Gwen, so it was very funny when Mary Jane was trying to give him advice, only for him to begin daydreaming, thinking, “Would you look at her… She’s gorgeous!”