Alerted by Torin of an evil presence above the city, the Kyoryugers see a strange energy from the sky before a mysterious green-eyed Tyrannosaurus briefly appears with a warning that Daigo’s best friend might die. The Kyoryugers are then ambushed by a group of Zorima, Golem Soldiers, and Barmia Soldiers before an armored figure named Neo-Geildon arrives with a figure he has just kidnapped. Revealed to be Ryoga Hakua of the Bakuryu Sentai Abaranger team, he transforms and suddenly attacks the Kyoryugers. Luckily, the Go-Busters arrive and hold off Aba Red before Tyranno Ranger of the Kyoryu Sentai Zyuranger team turns the tide alongside his captor Neo-Grifforzer. After they and their teams retreat, Hiromu thanks Daigo for helping him and Gokai Red before they are ambushed by Enter. Enter states that he and Escape have been resurrected as part of a Vaglass restoration program that has been activated in response to the evil force that Neo-Grifforzer and Neo-Geildon serve: Voldos, a being created from the combined malice of Dai Satan and Dezumozorlya that is targeting the dinosaur-themed Super Sentai teams to have their Dino Hope extracted and converted into Wicked Life Energy to complete his evolution.

With the Go-Busters and Beet J. Stag holding off the enemies, the Kyoryugers arrive at the site too late to save Ryouga and Geki in what is revealed to be a trap set for them, with Gabutyra defeated by Neo-Grifforzar and infused by Voldos’s power. By the time the Go-Busters find them, the Kyoryugers have had their Dino Hope removed brainwashing them into serving Voldos. The six are sent back in time to kill the dinosaurs. Upon encountering the dinosaurs, the Kyoryugers almost kill them when the green eyed Tyrannosaurus protecting them from an eruption breaks the spell as Daigo recognizes the dinosaur as Gabutyra in his original state. The shock of realizing the Tyrannosaurus is Gabutyra snaps the Kyoryuger’s back to normal. The Gabutyra of the past proceeds to explain to them the warning he told Daigo related to his future self who is dying from Voldos’s influence and that only Daigo can save him with the power of Dino Hope. Elsewhere, with help from the Abarangers’ Yukito Sanjyo using a specially made Super Sentai Zyudenchi, Yayoi creates a time portal to bring the Kyoryugers back to the present time.

Meanwhile, the Go-Busters and Kyoryu Silver mount a rescue mission to save Ryouga and Geki when they are kept back by the Deboth Knights and Luckyuro while Neo-Grifforzer and Neo-Geildon take their captives with them. However, the Kyoryugers arrive and fight a losing battle against the grunts while Ryouga and Geki make a mutual attempt to fight Escape before Daigo finds the dying Gabutyra. Luckily, upon being joined by J alongside Masato who appears due to the activation of a one-time anti-virus program, the reunited Go-Busters team drives off the Deboth Army while destroying the satellite stations as Daigo succeeds in restoring Gabutyra to life. Joined by the assembled Zyuranger and Abaranger teams, using the Abaranger and Zyuranger Zyudenchi to give Gabutyra support in replicas of Guardian Beast Tyrannosaurus and Bakuryu Tyranno to deal with the giant reinforcements, the Kyoryugers transform and the gathered Dinosaur Super Sentai take out the grunts. After the main team obliterates Enter in his Dark Buster form, Kyoryu Gold destroys Escape while the Abarangers defeat Neo-Geildon, and the Kyoryugers regroup with the Zyurangers as they all combine the Kentrospiker, Howling Cannon, and Dino Bomber into the Ultimate Howling Cannon to destroy Neo-Grifforzar. 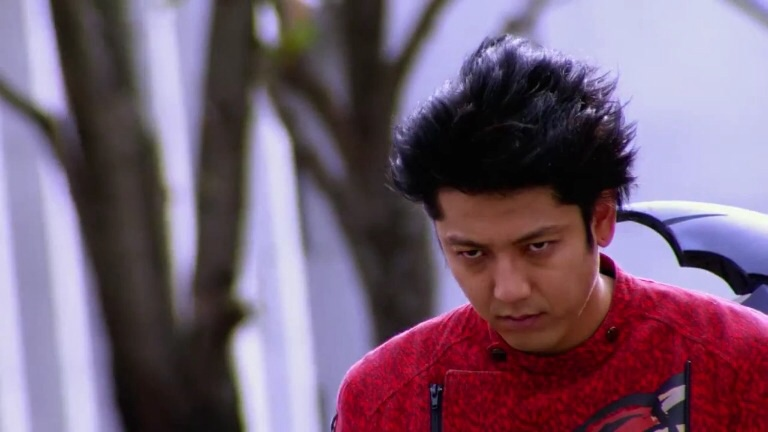 However, Neo-Grifforzer contains the blast as he departs to space to sacrifice himself to complete Voldos’s evolution. Though the Kyoryugers form Raiden Kyoryuzin, with the Guardian Beast Tyrannosaurus and Bakuryu Tyranno replicas transforming into Daizyuzin and Abarenoh, the Dinosaur Super Sentai are powerless against Voldos. Luckily, having obtained the Go-Busters Zyudenchi from Masato before he fades back into data, Red Buster summons Tategami Lioh whose head is used in the Tategami Raiden Kyoryuzin formation so it, Daizyuzin, and Abarenoh can focus their powers to blast Voldos back into space. Later, after giving their goodbyes to the Gabutyra of the past, the Kyoryugers decide to join the Go-Busters in a victory meal.

First appearance of the ToQgers

What the teams do not know is that Neo-Geildon has survived, and he uses Messiah Card 13 to become Neo-Messiah to avenge his creator. Before he can do anything, a rainbow-colored train descends from the sky and from it emerges the 38th Super Sentai… Ressha Sentai ToQger. Using their unconventional fighting style, which includes switching their colors, the ToQgers quickly destroy Neo-Messiah.

Second only to 199 this is a brilliant team-up bringing back all the dinosaur teams was an awsome idea and not  only that but bringing back new versions of the villains was just plain amazing.