After being killed in Daredevil, Elektra Natchios (Jennifer Garner) is revived by a blind martial arts master called Stick (Terence Stamp). She is brought to his training compound to learn Kimagure, an ancient martial arts discipline that provides its practitioners with precognition as well as the ability to resurrect the dead. Elektra is soon expelled because of her inability to let go of her rage. She leaves and uses her training to become a contract killer.Years later, Elektra infiltrates a heavily guarded area, kills the guards, and manages to slay her target DeMarco (Jason Isaacs). Elektra’s agent McCabe (Colin Cunningham) receives an unusually large offer from an anonymous client wishing to hire Elektra’s services. The only stipulation; she must spend a few days in a rented home on the island where the assassination is to be performed before the names of the targets are revealed. During the wait, Elektra finds a girl Abby (Kirsten Prout) who tried to swipe Elektra’s necklace and Elektra sends her away. While meditating, Elektra meets and befriends Abby’s father Mark Miller (Goran Visnjic). Abby later invites Elektra to dinner on Mark’s behalf. Later that day, Elektra discovers that Abby, like Elektra herself, has obsessive-compulsive disorder. Elektra develops a romantic interest in Mark, but soon learns he and Abby are the targets she has been hired to kill. Elektra spares them and leaves, but later returns in time to protect them from assassins sent by The Hand, a crime syndicate of ninja mercenaries.Meanwhile, Roshi (Cary-Hiroyuki Tagawa), master of The Hand, learns of the failed attempt and permits his son Kirigi (Will Yun Lee) to lead a new team of assassins to kill Elektra and return with Abby, referred to as “The Treasure”. Elektra tries to leave Abby and Mark with Stick, but he scolds her into protecting them herself. She then drives Mark and Abby to McCabe’s country house, but is followed by Kirigi, Typhoid (Natassia Malthe), Stone (Bob Sapp), Kinkou (Edison T. Ribeiro), and Tattoo (Chris Ackerman). Elektra flees with Mark and Abby through a secret underground exit to the orchard, while McCabe sacrifices himself to allow them to escape.Kirigi and the assassins hunt down Elektra, Mark, and Abby in the forest nearby. Elektra manages to kill Stone, while Abby and Mark kill Kinkou with one of his own daggers. As Elektra is distracted by the revelation that Abby has martial arts skills, Typhoid gives Elektra the “Kiss of Death”. Abby is captured by Kirigi. Suddenly, Stick and his Chaste ninjas arrive, forcing Kirigi, Typhoid, and Tattoo to retreat. Stick manages to save Elektra from death and takes them under his protection. Stick confirms Abby is a martial arts prodigy which is the “Treasure” of martial arts whom the Hand seek to use. Elektra learns that she was a Treasure herself and her mother was a casualty of the fight between The Chaste and The Hand with her as reason. 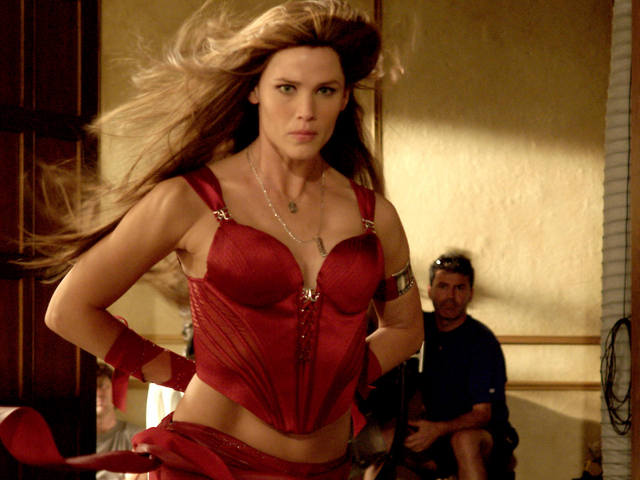 She also learns that Stick set up the murder contract on Mark and Abby in order to test Elektra’s propensity for compassion. Elektra astrally projects herself to a meeting with Kirigi and challenges him to a fight; the winner claiming Abby for their own purpose. Elektra returns to her childhood home to face Kirigi, and finally remembers he was her mother’s killer. Elektra is defeated by Kirigi, but Abby arrives and engages him long enough for Elektra to recuperate. Elektra and Abby then escape and hide in a hedge maze but are separated when Abby is captured by snakes dispatched by Tattoo. Elektra finds Tattoo and kills him, saving Abby in the process. Elektra engages Kirigi a second time and manages to kill him. Typhoid poisons Abby, the same way she did to Elektra earlier, killing her in the process. Elektra kills Typhoid and successfully resurrects Abby, overcoming her rage. When Mark comes to take Abby, he and Elektra kiss and go their separate ways. Just as Elektra leaves the grounds of her childhood home for the final time, she meets Stick and the two exchange words to each other. Elektra departs, knowing Abby and Mark will be safe. 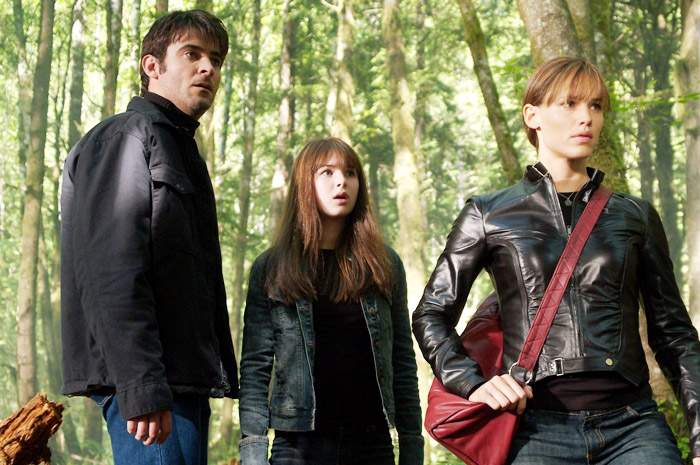 It’s great for what it is. Don’t expect to figure out the meaning of life, this movie is just for fun. It has great action, pretty darn good visuals, and is everything a comic book movie should be.An extended and slightly refined two-disc unrated edition director’s cut DVD was released in October 2005, featuring a cut detailed for a home video. However, unlike the Daredevil director’s cut which added about 30 minutes of material not in the original theatrical release, this director’s cut added only about 3 minutes of footage.