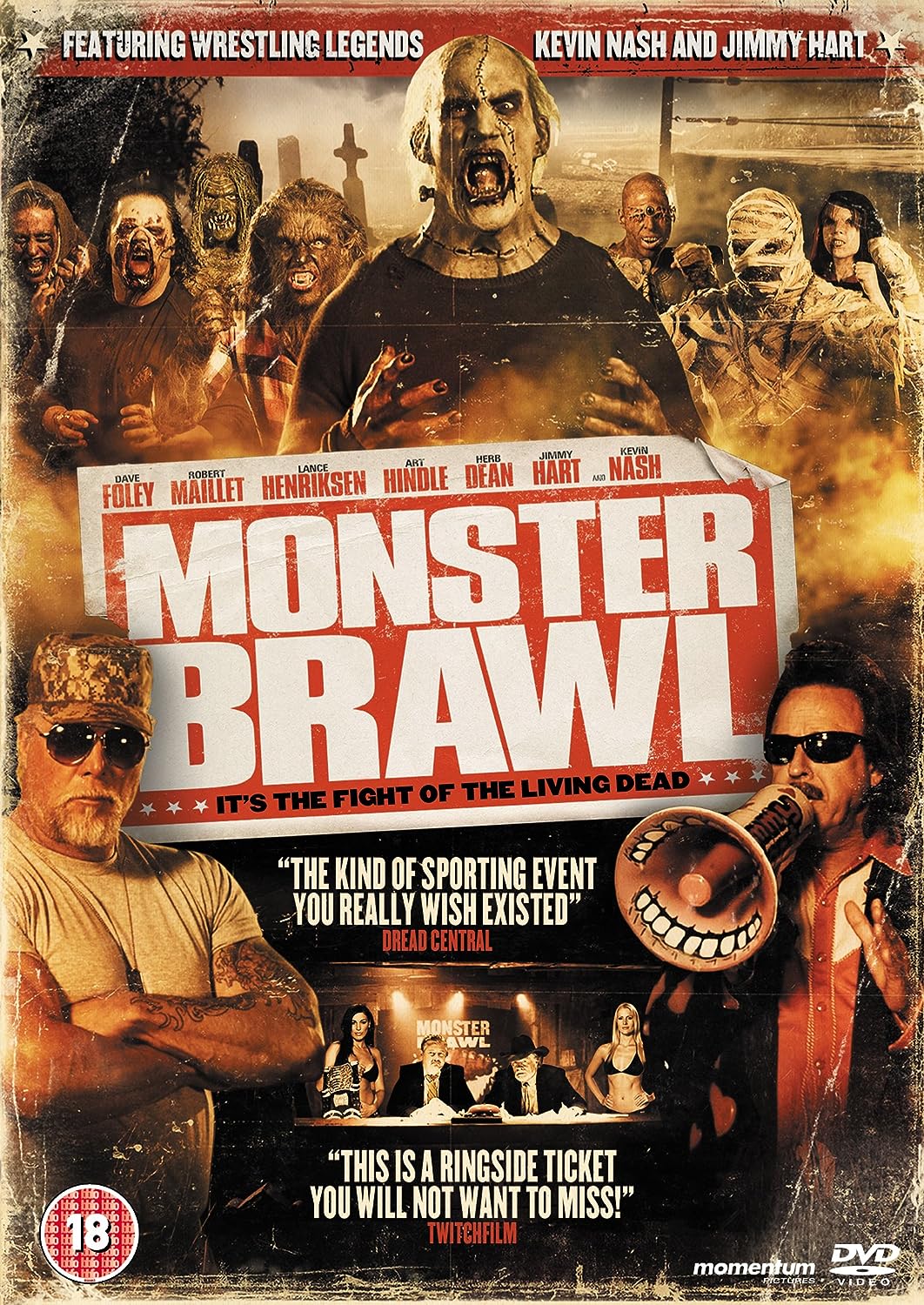 The film depicts a wrestling-style fight to the death set inside an abandoned and cursed graveyard, shown in a pay-per-view style atmosphere. The fighters are eight classic movie monsters – Cyclops, Swamp Gut, Frankenstein’s Monster, Lady Vampire, Werewolf, Mummy, Witch Bitch and Zombie Man. Acting as play-by‐play announcer is Buzz Chambers (Dave Foley) with color commentating by former champ Sasquatch Sid (Art Hindle). The Brawl itself is divided into two classes: The Creature class and the Undead class. For the Creatures: Cyclops, Werewolf, Witch Bitch and Swamp Gut. For the Undead: Lady Vampire, Zombie Man, The Mummy and Frankenstein. Each round is preceded by the origin of the combatants.

For the first round, Cyclops, revealed to have received a message of the tournament goes to prove himself to the world and eventually to crush Hades who had cursed him with his foreseeing eye, while Witch Bitch is recruited by a diminutive troll named Grub who is a renowned monster combat trainer to overcome her small village’s hatred of her through fear and dominance. As their combat starts off, Cyclops clearly has the advantage, but Witch Bitch is tenacious and fights viciously. As the combat ensues, she attempts to slam and pin the Cyclops down, her efforts leading to an illegal move called by the referee. Cyclops counters her attacks by bringing out a small mallet to brutally bludgeon her. Her retaliation is by whipping out a carving knife and attacking, inadvertently slashing the ref’s throat in the process. She tries to blind Cyclops, but he turns his legendary optic beam on her, melting her face clean off and killing her. Outraged by the loss, Grub attempts to attack the Cyclops, only to be decapitated in a single punch. Cyclops stands as winner for round one.

Round two faces off the mummy, who was the subject of a national search when he escaped from his crate at a museum and killed the loading dock worker there, while Lady Vampire is hunted in her mysterious home by a man who tries to gun her down, only to be bitten and chased off in fear. Mummy has the advantage of no blood or feeling to the vampire’s throws and attacks. He out-muscles most of her attacks and keeps on coming, he blinds her and knocks her out with a sleeper hold. But when he goes to get a wooden stake and bring it back, she revives and continues to wail on him. He has a brief advantage with his magical amulet that harnesses the power of the sun, burning half of Lady Vampire’s face. But she throws him from the ring, separating him from his amulet, after hitting him with a tombstone, she punches him through his chest, ripping out his black heart and killing him. She is declared the winner of the Undead lightweight round. The third round, featuring the heavyweight combatants Werewolf and Swamp Gut, they are preceded by the Werewolf’s story, having witnessed his wife’s death at the hands of a werewolf, he goes out in search to kill him.

However the werewolf attacks and bites him, cursing him even though he manages to finish the wolf off. He is smarmy and sarcastic and viciously self-confident with the advantage of the full moon showing that night. Swamp Gut’s story is portrayed as a documentary where, like a crocodile he hunts unassuming victims in his swamps, paralyzing them with his toxic spit and devouring them. As the match starts, Werewolf proves little effectiveness in his body slams due to Swamp Gut’s girth, but his agility keeps him one step ahead as he attacks the gut’s weak spot, his stomach. Sid makes reference to King Hippo of Punch Out in comparison to the battle. Werewolf’s blows weaken his opponent who collapses to the ring. He does a dive from the corner onto Swamp Gut, causing his stomach to explode, killing him. Werewolf is the king of the creature heavyweight championship and moves on to the final match. The second match is between Frankenstein and Zombie Man, Frankenstein’s life beginning after a German doctor’s attempts to reanimate the dead are successful, he calls his creator ‘father’ and has an emotional attachment to him immediately, while Zombie Man, a kidnapped government experiment at the ultimate soldier is trained specifically for this tournament. Colonel Crookshank sacrifices men to feed the zombie’s appetite for human flesh and earn trust. As the pair match off, Zombie Man is much faster than Frankenstein, but his bites are ineffective. The pair match blow for blow, but much to his father’s disdain, Frankenstein does not realize he needs to destroy Zombie Man’s head. As the doctor climbs into the ring and attacks Zombie Man with a wrench, Crookshank does the same and kills the doctor with a hatchet to the back. This enrages Frankenstein who brutally attacks Zombie Man, eventually crushing his skull with his foot. In his death throes, Zombie Man summons up a horde of six zombies, one of which bites Sid in the booth before they combine their efforts and attack Crookshank before the caretaker kills them all.

The final match is between Werewolf and Frankenstein, Sid slowly loses his composure and becomes a zombie during the round, forcing Buzz to kill him. Meanwhile, Werewolf is at a severe disadvantage with the towering undead. His blows don’t phase Frankenstein, who, despite having his leg practically torn off in a figure four hold from the Werewolf manages to beat him into submission by crushing his skull with his hands. Frankenstein starts to walk away the victor but Werewolf recovers, attacking him more viciously, taking several tombstones and crushing them over Frankenstein’s head. He takes the belt for himself, but Frankenstein wakes and attacks the unaware werewolf, grabbing his jowls before ripping his head apart. Finally victorious, Frankenstein takes his hard-earned belt and starts to leave. But Crookshank, now a sentient zombie challenges him to a fight. Both men standing at even height and muscle they start to wield a mighty blow at one another when the screen freezes and goes dark. In a post credit scean Jimmy Hart is speaking on the phone while a zombie walks behind him grabs and pull him under the ring.

If you enjoy wrestling and you enjoy horror this may be one for you!

Way back when a character named Frank Castle made his first appearance in the pages of The Amazing Spider-Man #129. Castle’s family was mowed down by the mob in New York City and he took it upon himself to ‘punish’ all criminals from then on and he became…insert dramatic pause here… The Punisher. The character developed a solid cult following with guest appearances in later issues of Spider-Man as well as Daredevil and he was eventually given his own five issue mini series by Steven Grant and Mike Zeck in the eighties. A regular series followed a few years after that as well as a spin off series or two and a goofy straight to video film starring Dolph Lundgren. Since then series’ have been cancelled, then rejuvenated and since injecting the character with some much needed fresh blood in the form of Preacher team Garth Ennis and Steve Dillon, the comics seem to be back on track and thus, a new R-Rated big screen adaptation is born.

In this incarnation, Frank Castle (Thomas Jane – no relation to yours truly) is an undercover agent finishing his last job before he and his lovely wife and son are to go off to London to live happily ever after. When one of the hoods gets shot up and dies in the sting, he Castle finds out the hard way that he was the son of a prominent businessman, Howard Saint (John Travolta). Saint doesn’t take too kindly to the death of his son and decides to pay Castle back in spades by having his entire family killed during a party on the beach at his parent’s house.

His family’s death sends Castle into a downward spiral – he starts drinking heavily and becomes a man obsessed with vengeance. He uses his special forces training to trick out some weapons and build himself a small arsenal, which will come in handy when he begins to wage his one-man war on crime. He moves into a run down apartment and befriends three of the tenants there, then proceeds to take Saint and his small army of thugs down a few pegs, proving that revenge truly is a dish best served cold.

There aren’t a whole lot of plot twists or deep, original characters in The Punisher. There aren’t any intricate, meaningful discussions on the reasons we’re all on this Earth and it doesn’t really break any new ground in any way whatsoever. What it is though, is pure, unabashed entertainment.

Despite some very obvious moments where the comic strays from the source material  the character does stay reasonably true to his comic book roots. Jane does a great job as a tough man of few words – playing the strong and silent type with a bit of style and a whole lot of cool. Travolta does a nice job as the heavy, going over the top as he’s prone to do in a few scenes that make him look and sound like a walking talking comic book villain. Throw in some fun cameos and bit parts for the lovely and talented Rebecca Romijn-Stamos (X-Men), Roy Scheider (Jaws), and even professional wrestler Kevin Nash and you’ve got a good cast that do a good job with the unashamedly popcorn material they have to work with.

Castle’s mission of vengeance is more or less a way to tie together a few different action set pieces in the film, giving the character a reason to kill. Director John Hensleigh ensures that the movie trucks along at a quick pace and that the action scenes are the focal point of the film, but still manages to work a simple but effective story into the shoot-outs and explosions we all want to see.