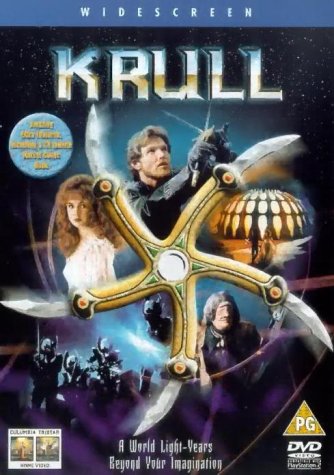 A narrator describes a prophecy regarding “a girl of ancient name that shall become queen, that she shall choose a king, and that together they shall rule their world, and that their son shall rule the galaxy”

The planet Krull is invaded by an entity known as the “Beast” and his army of futuristic “Slayers”, who travel the galaxy in a mountain-like spaceship called the Black Fortress. In a ceremony involving exchanging a handful of flame between the newlyweds, Prince Colwyn and Princess Lyssa plan to marry and form an alliance between their rival kingdoms in the hope that their combined forces can defeat the Beast’s army. The Slayers attack the wedding before it is completed, killing the two kings, devastating both armies and kidnapping the princess. Prince Colwyn is found and nursed by Ynyr, the Old One. Ynyr tells him the Beast can be defeated with the “Glaive”, an ancient, magical, five-pointed throwing weapon. Colwyn retrieves the Glaive from a high mountain cave before setting out to track down the Black Fortress, which teleports to a new location every day at sunrise. As they travel, Colwyn and Ynyr are joined by magician Ergo “the Magnificent” and a band of nine thieves, fighters, bandits and brawlers. Colwyn offers to clear their criminal records, successfully enlisting Torquil, Kegan, Rhun, Oswyn, Bardolph, Menno, Darro, Nennog, and Quain. The cyclops Rell later joins the group.

Colwyn’s group travels to the home of the Emerald Seer, and his apprentice Titch. The Emerald Seer uses his crystal to view where the Fortress will rise, but the Beast’s hand magically appears and crushes the crystal. The group travels to a swamp that can not be penetrated by the Beast’s magic, but Slayers attack, killing Darro and Menno, and also the Emerald Seer, before he can confirm the next location of the Fortress. While the group rests in a forest, Kegan goes to a nearby village and gets Merith, one of his wives, to bring food. The Beast exerts remote command of Merith’s helper, who attempts to seduce then kill Colwyn, but fails. Ynyr leaves the resting group to journey to the “Widow of the Web”, an enchantress who loved Ynyr long ago and was exiled to the lair of the Crystal Spider for murdering their only child. The Widow reveals where the Black Fortress will be at sunrise.

She also gives Ynyr the sand from the enchanted hourglass that kept the Crystal Spider from attacking her and will keep a badly injured Ynyr alive on his journey back to the group. As the Crystal Spider attacks the Widow, Ynyr flees the web and returns to the group to reveal the location of the Black Fortress, as he loses the last of the sand and expires. The group capture and ride mystical Fire Mares to reach the Black Fortress before it teleports again. Slayers at the Fortress kill Rhun, while Rell sacrifices himself to hold open the huge spaceship doors long enough to allow the others to enter. Slayers inside kill Quain and Nennog, while Kegan sacrifices his life to save Torquil as they journey through the Fortress. When Ergo and Titch get separated from the others and are attacked by Slayers, Ergo magically transforms into a tiger to kill the Slayers and save Titch’s life. Colwyn, Torquil, Bardolph, and Oswyn are trapped inside a large dome. Colwyn attempts to open a hole in the dome with the Glaive, while the other three search for any other passageway. The three fall through an opening and are trapped between slowly closing walls studded with huge spikes, which kill Bardolph.

Colwyn breaches the dome and finds Lyssa. He attacks the Beast, injuring it with the Glaive, which becomes embedded in the Beast’s body. With nothing to defend themselves against the Beast’s counterattack, Lyssa realizes that they must quickly finish the wedding ritual, giving them the linked power to shoot flame, with which they finally slay the Beast. Its death frees Torquil and Oswyn from the spike room and they rejoin Colwyn and Lyssa, then Ergo and Titch, as they make their way out the self-destructing Fortress. Colwyn and Lyssa, now king and queen of the combined kingdom, name Torquil as Lord Marshal. As the surviving heroes depart across a field, the narrator (Ynyr) repeats the opening prophecy that the son of the queen and her chosen king shall rule the galaxy. 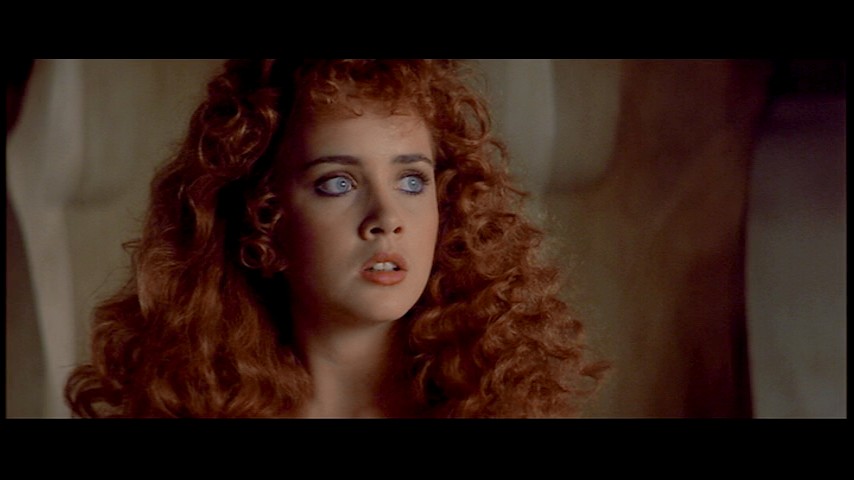 All in all, this is a very honest and very watchable fantasy movie, now a little forgotten but worth (re)discovering. Not exactly a masterpiece but a very nice watch.