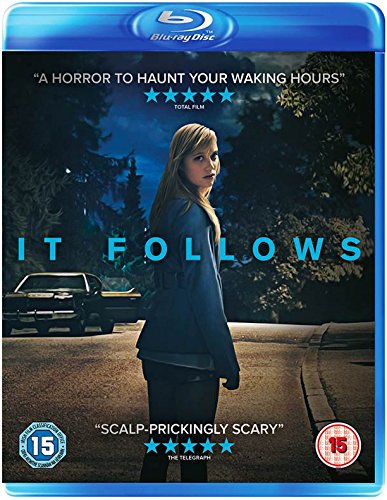 Oakland University student Jay goes on a date with her new boyfriend, Hugh. At the movies, Hugh points out a girl whom Jay says she cannot see. Afraid, he asks that they leave. On another date, Hugh and Jay have sex in his car, but afterwards he incapacitates Jay with chloroform and she wakes up tied to a wheelchair, in the Packard Plant Hugh explains that she will be pursued by an entity that only they can see, and that it will take the appearance of any person. If it catches Jay, it will kill her and pursue the previous person to have passed it on: Hugh. After they see a naked woman walking toward them, Hugh drives Jay home and flees.The next day, the police cannot find the naked woman or Hugh, who was living under a false identity. At school, Jay sees an old woman in a hospital gown walking towards her, invisible to others. Jay’s sister Kelly and her friends Paul and Yara agree to help and spend the night in the same house. Paul investigates a smashed kitchen window but sees no one; Jay sees a disheveled, urinating, half-naked woman walking toward her, and runs upstairs to the others, who cannot see the entity. When a tall man with seemingly no eyes enters the bedroom, Jay flees the house, meeting again with her friends at a nearby playground.

With the help of their neighbor, Greg, the group discovers Hugh’s real name, Jeff Redmond, and trace him to his address. Jeff explains that the entity began pursuing him after a one-night stand, and that Jay can pass it to someone else in the same way. Greg drives the group to his family’s lake house and teaches Jay to shoot a revolver. The entity, taking the guises of Yara, one of Jay’s neighbours, the tall man from before and Annie suddenly arrives and attacks Jay on the lakefront. She attempts to shoot it in the head but it recovers unharmed. Jay flees in Greg’s car but crashes into a cornfield, and wakes up in a hospital with a broken arm.

Greg has sex with Jay at the hospital, as he does not believe the entity exists. Days later, Jay sees the entity in the form of Greg walking towards his house. It smashes a window at Greg’s house and enters. She tries to warn the real Greg on the telephone but he does not answer. She runs into the house and finds the entity in the form of Greg’s half-naked mother knocking on his door before it jumps on Greg and kills him. Jay flees by car and spends the night outdoors. On a beach, Jay sees three young men on a boat. She then undresses and walks into the water. Back home, Jay refuses Paul’s offer of sex.

The group plans to kill the entity by luring it into a swimming pool and dropping electrical devices into the water. Jay, waiting in the pool, spots the entity and realizes it has taken the appearance of her father. Instead of entering the pool, it throws the devices at her. Firing at an invisible target, Paul accidentally wounds Yara, but shoots the entity in the head, causing it to fall into the pool. As it pulls Jay underwater, Paul shoots it again and Jay escapes. Paul asks Jay if the entity is dead. Jay approaches the pool and sees it filling with blood. Jay and Paul have sex. Afterwards, Paul drives past prostitutes in a seedy part of town. Later, Jay and Paul walk down the street holding hands. A figure walks behind them.

This is how horror movies should be made. Fear should “follow” you, not “surprise” you. It Follows is easily one of the most terrifying horror movies of the decade.