Having finished Gokaiger a short while back, it seemed the right time to look back ion it. Gokaiger takes place with our heroes going to Earth in the search of the Greatest Treasure in the Universe. What they don’t know is what happened in the past, their enemies the Zangyack attacked the Earth, but luckily the past 34 sentai all teamed up to fight. In the end they were ready to die for the Earth as they attempt an attack to use all of their powers. The attack works as the Zangyack fleet is destroyed and the warriors survive, but they have lost their powers. The pirates come to Earth and they have all the powers of the past warriors including their own. On Earth they see the Zangyack as a new fleet as come to Earth and seeing them attack the humans reminded them of the pain the Zangyack caused. They attack the Zangyack and win their first battle, but now they have gotten to much fame as bounties are put on them. The team now try to find anyway of finding the treasure and survive from the Zangyack attacking them. Along the way they will meet the past warriors as they will help them retrieve the great powers of the Sentai.

There are five members in the team and yes they are indeed aliens because they come from different planets. The leader is Marvelous and along with a cool jacket he is a completely awesome leader as he leads his team well. He knows how to fight as he mostly uses a gun and sword his style of fighting can look carefree at times which he can be at times. Like other past red warriors though his back story comes an important part of the plot as his past rival returns. He was originally part of the Red Pirates as he was with Aka Red and Basco as they went around space to find the Ranger Keys. Soon Basco betrays them though so he can have the keys for himself as he tries to turn them in. Marvelous escapes with the keys and Navi, but it seems that Aka Red didn’t make it. When Basco comes back his personality changes greatly as he wants revenge for the death of Aka Red and won’t have Basco get in the way of his dreams. When Marvelous was alone he started to recruit more team mates along the way. First is Joe who becomes Gokai Blue and he is the silent and tough guy like Abare Blue. He does have a soft spot though because of his past of being part of the Zangyack back then. He couldn’t take it though and he tries to leave along with his friend Cid, but Cid is captured. Joe is left to fight alone, but Marve comes along and saves him and there he recruits him because of his skills. Luka was next as she was in poverty because of the Zangyack and she started to loss many things in her life.

It mostly seems that she is greedy, but she has her own motives. One day she tries to steal from the Zangyack, but she is caught. While fighting the troops Marve and Joe helped out and she was recruited there. Doc was next, but his name is Don. He is mostly a coward who hates to fight, but one day he helps out the crew by doing simple chores and Marve is impressed by him and recruits him. Unlike the others though his fighting style is random and he just pulls things off. Ahim was a princess on her home planet, but it was destroyed by the Zangyack and she joins the team to give hope to any survivors. She may not seem like a fighter as she acts very friendly and even motherly, but when she fights she can really let loose. Finally is Gai who is a human as he gets his powers from past warriors who have died. He tries to become a member, but he has to impress the team first. He is also a complete fan of the Sentai as he knows all of them and when he meets any past heroes he freaks out. 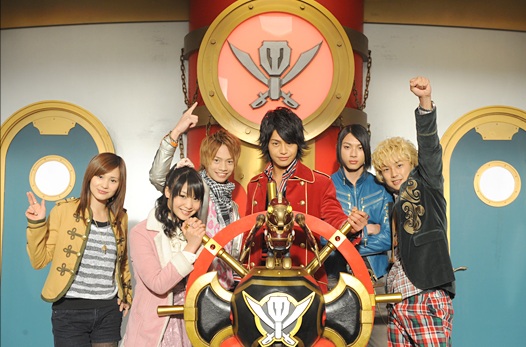 Next are the villains as they are the Zangyack. An empire that controls the whole universe with an iron fist as they attack, enslave, and destroy many planets. The fleet that is sent to Earth is lead by Warz Gil who is the son of the Emperor. He mostly acts like a spoiled brat most of the time when his plans fail, but in soon time he starts to change. Barizorg is Gil’s bodyguard as he mostly stays silent and remains a mystery, but who is he? Insarn is also a member as she mostly is there because she has knowledge in science and helps with making plans. To help as well is Damaras who is very protective of the prince and tries to keep him calm. New Zangyack members show up, but there isn’t much to say about them its just the Emperor with one of his right hand men. The best villain though is Basco who is the rival of Marve as he finds a new partner, Sally a monkey like creature. When they first meet and has even more ranger keys as he summons past sixth rangers to fight the team. His style of living is that he has to lose something to gain anything which is why he tries to get rid of the Red Pirates so he could have the ranger keys and the treasure. He wants the treasure as well, but he will let the team do some of the work so he could just finish them off and just stop there.

This is an anniversary series not only does the team use past powers, but they also meet past warriors. These episodes are mostly tributes to the past as they use elements from those series. Each have some form of nostalgia to them as they can bring simple things or even jokes referencing the series. Heck even the main characters are tributes to the usual type of characters in Sentai. The series uses a lot of nostalgia which is the best part because they bring back many actors as this is the best way to use the nostalgia factor. Each episode also has an important fight that has the instrumental opening of the series play during the fights, it just brings a lot memories. I really like that the team still fight like themselves though, they may have different powers, but they still fight like themselves. The best example is Doc who has a very improved style of fighting and even with becoming different rangers he can still stick to his comedic fighting. Each character has a back story of some type and it makes you feel for the characters which is another great thing. This is probably the best cast I have seen, again these characters are tributes and even mix character traits which works very well and all the actors are great not a single bad one! The fights are simply amazing as its great to see the past powers be used in today’s time and it keeps fights fresh as the team can think of many combinations. Basco is the best villain no doubt as he is tough and is a guy you love to hate. He is completely vile and he stays like that which is the best part! They even teamed up with some past warriors!

Its one of the best Sentai… no one of the best Toku shows! The anniversary theme is heavily used and can bring nostalgic moments. The story still stays intact and so what the series didn’t have a tribute for ever series they still got at least one actor from all 34 series! With that its better to see the series give focus on the story then the nostalgia. The nostalgia is very well done, but it shouldn’t be the major focus its great to see that the series still carries it’s own story. All the heroes are great and the rival villain Basco is simply amazing! This would be a great start to new fans because it shows what the series is like and can give interest in other series. In the end the series only big flaw are the main villains, but everything balances perfectly as we get great development and great tributes to the franchise.