In the ’90s two of the biggest shows on television were Xena: Warrior Princess and Hercules: The Legendary Journeys. Saban wanted something similar for kids but couldn’t quite get the idea out of the talking stages. With a deal for Young Hercules in development at Fox, enter Robert Hughes who pitched a series centered on Celtic mythology. With the green light, work began on Mystic Knights of Tir Na Nog in Ireland and the company’s first successful completely original Ameri-Toku series.

The show pits the good people of Kells against Queen Maeve who wishes to rule over the land. Rohan, the druid Cathbad’s apprentice, comes upon an ancient scroll telling of the great warrior Draganta who may have the power to save the kingdom. Aided by reformed thief Angus, the king’s daughter Princess Deidre, and foreign prince Ivar, the four are given mystical weapons by the fairy king of Tir Na Nog. Using these weapons the four are able to summon powerful mystic armor based around the elements of fire, air, earth, and water. Deidre wishes to break out of being just a simple princess and while her father wishes to protect her, she is determined to fight like any other warrior. Angus is tempted by his old life as a thief but learns that his new friends are worth far more than anything he could ever steal. Ivar is seeking a chalice stolen from his people, which pit him against one of Maeve’s generals.

Throughout the series the group has to protect not only Kells but the fairy people of Tir Na Nog. Mider, a dark fairy who has given Maeve a great deal of power, wishes to rule over Tir Na Nog and will do it any cost, even if it means betraying Maeve. At the end of the series he allies himself with Nemain, the former ruler of Maeve’s domain, Temra. With the help of King Conchobar, the fair Aideen, a dragon named Pyre, and the fifth mystic knight of the forest, Garrett, the group fights against Queen Maeve and her vicious monsters. Along the way the secret of Draganta is revealed and it may forever change Rohans life.

Mystic Knights, being the first Saban Ameri-Toku that eschewed the use of footage from earlier Japanese series, had a tall order to fill. Would they be able to create a compelling show without the aid of footage to fall back on? The answer is a resounding yes! The show benefited from strong writing, inspired by Lord of the Rings and the Celtic myths. Mystic Knights featured several long running arcs and multi dimensional characters that most of the other Ameri-Tokus seemed to lack.

The show took every advantage of its filming location and we got the richest and most beautiful Ameri-Toku of all. It’s a shame most of the copies in circulation are of such low quality so that richness can’t be fully appreciated. Castles, forests, villages, throne rooms, this show spared no expense. We even got huge battles taking place on horseback, including a siege on the castle. Although to be fair, this footage was heavily reused throughout the series. The music of the show was also top notch, none more so than the theme of the show. Much like the rest of the show, it transported you into this mystical realm of dragons, fairies, and great heroes. I’d be lying however if I said I didn’t enjoy the German version of the opening, which, strangely, is in English. Go figure! Special mention must be given to Lisa Dwan, who played Princess Deidre, who brought a wealth of life to the show’s main female character. Deidre wouldn’t take anyone’s crap and was a surprisingly strong female character for an Ameri-Toku.

All of these shows were centered around toys, and the inclusion of what became toys was at odds with the sweeping story the show was attempting to convey. Robert Hughes recalls one meeting where Ban Dai asked him to put motorcycles in the show. They didn’t end up putting bikes in the show, but were forced to compromise with the dreaded, “Battle Wagon.” Even the Mystic Armor seemed tacked on to the major story. This was a character driven show that was forced into having transforming heroes. The weapons they were given, a sword, cross bow, mace, trident, and axes were rarely used for close combat and instead would shoot lasers. Yes, you read that right, lasers. They even had “Battle Gauntlets” which shot them. The toyetic nature of the show clashed far too hard with the serious storyline.

Also, the storylines, while good, did seem to drag on at a times or were even dropped for extended periods. When Garret is introduced he’s given a whole arc of episodes only to disappear for a stretch of over ten episodes, suddenly reappear, and then go off on a quest, which he’d only return from for the final episodes. He’s also given an interest in Deidre and comes off a bit creepy before he mellows out after he realizes she isn’t interested in him. The series seemed to put a ton of focus on Rohan. He was the main character but it seemed a large chunk of time went to him while everyone else seemed to get shafted in terms of character development. The Mystic Knights all do get a chance to shine, but the ancillary characters suffer, considering that the show featured no less than twelve characters credited up front in the series credits. It was a tall order to give everyone equal time to shine.

Again, the toy line. At the time (in large part thanks to Power Rangers) the toy market was flooded with action figures based on TV shows. Mystic Knights just couldn’t stand out with its generic roleplay items and average main figures. Again, the show tried not to focus on selling toys and instead on telling good stories. Those stories did help the show get picked up for a second season but in the middle of pre production the plug was pulled. The toys weren’t selling, so the show wasn’t worth keeping on air. It’s a shame, too The writers had been planting seeds in the first season to expand on. Angus would have left the show (due to problems with star Vincent Walsh) and a new set of villains would have been introduced. Is It Worth Watching? Yes! While the pacing can be a bit sluggish at times the show fits quite nicely with the slate of fantasy series that currently dominate the airwaves. Sure, it’s no Game of Thrones, but Mystic Knights could be a great introduction to the genre for kids and has quite a bit for adults to enjoy as well. 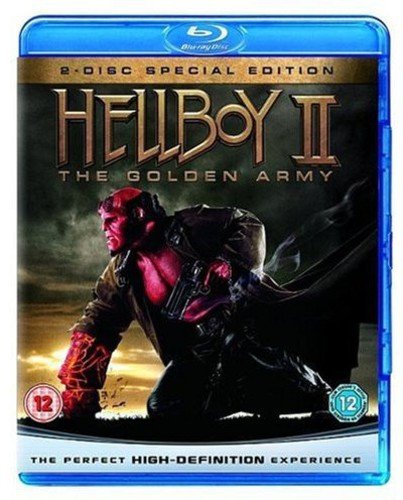 During Christmas 1955, an 11-year-old Hellboy is told a bedtime story by his adoptive father, Trevor Bruttenholm, involving an ancient war between human and magical creatures, started by human’s greed. After defeat of the magical creatures’ forces, the master of the goblin blacksmiths offers to build an indestructible mechanical army for the elven King Balor. Encouraged by his son Prince Nuada, Balor orders the building of this Golden Army. The humans are devastated by the army. Balor is ridden with guilt and forms a truce with the humans: Man will keep his cities and the magical creatures will keep their forests. Nuada does not agree with the truce and leaves in exile. The magical crown controlling the army is broken into three pieces, one going to the humans and the other two kept by the elves.

In the present, Nuada declares war on humanity. He collects the first piece of the crown from an auction, killing everyone at the site by unleashing tooth fairies, and kills his father for the second piece. His twin sister, Princess Nuala, escapes with the final piece. Meanwhile, Hellboy is having issues with his girlfriend Liz, and trouble accepting that their organization, the B.P.R.D. must remain undercover. Investigating the auction slaughter, Hellboy allows himself to be revealed to the world. In the commotion, Abe Sapien discovers Liz is pregnant; she swears him to secrecy as she ponders keeping the child. Furious at Hellboy’s actions, the Bureau’s superiors send a new B.P.R.D. agent, the ectoplasmic medium Johann Krauss, to take command. With Krauss in charge, the team tracks the tooth fairies to the troll market, an enormous city hidden under the Brooklyn Bridge. Abe stumbles onto Nuala, who has obtained a map leading to the Golden Army, and falls in love with her. She is brought under B.P.R.D. protection following an attack by Nuada’s sidekick, the troll Wink, and an elemental forest god, both of which Hellboy kills. During the fight, Hellboy is questioned by Nuada whether it is right to fight for the humans when he too is considered a monster.

Nuada tracks his sister to B.P.R.D. headquarters using their magical bond, which causes them to share wounds and read each other’s thoughts. Sensing her brother’s arrival, Nuala attempts to destroy the map and hides the final crown piece in one of Abe’s books. Nuada critically wounds Hellboy with his spear, promising Nuala in exchange for the final crown piece. Unable to remove the spear shard, Liz, Abe and Krauss take Hellboy to the Golden Army’s location in the Giants Causeway, County Antrim, Northern Ireland. They encounter a Bethmoora goblin who brings them before the Angel of Death, who has awaited their arrival. Though warned Hellboy will doom humanity if he lives, and that she will suffer the most from it, Liz pleads for Hellboy’s life. The Angel removes the shard from Hellboy’s chest and tells Liz to give him a reason to live. She reveals to Hellboy that he will be a father, and he recovers.

The goblin leads the team to the resting place of the Golden Army, where Nuada awaits them. In exchange for Nuala, Abe gives him the last piece of the crown. Nuada awakens the Golden Army, ordering the team’s death; the army proves indestructible as the soldiers magically repair themselves. Hellboy challenges Nuada for the crown, and Nuada is forced to accept, since Hellboy’s father was a Prince of Sheol, the Fallen One, a member of Hell’s royal family. Hellboy defeats Nuada and spares his life, but Nuada tries stabbing him. Nuala commits suicide to stop her brother; the dying Nuada tells Hellboy he will have to choose whether humanity or magical beings must die. Abe psychically shares his feelings with Nuala before she and her brother die. Hellboy briefly considers using the crown, but Liz melts it, deactivating the Golden Army. As the team leaves the underground compound, Tom Manning reprimands them. Hellboy, Liz, Abe, and Johann resign from the B.P.R.D. Hellboy contemplates his future life with Liz and their baby. Liz corrects “babies” and holds up two fingers, signifying that she is pregnant with twins.
Hellboy II: The Golden Army is a wild, darkly ornate ride through the world of half-forgotten gods and fey. While it has a few flaws, those are far outweighed by the brilliant of Del Toro’s vision.