The series is a mash-up of the Barry Allen and Wally West eras of the comics. The show’s producers, Danny Bilson and Paul De Meo, wisely chose to use the Barry Allen version of the character (played by John Wesley Shipp). This was probably due to the greater story possibilities that Allen’s job as a police forensic scientist could offer. It didn’t matter that Barry had been killed off in the comics five years prior to the show. The character of Dr. Tina McGee (played by the savoury Amanda Pays) comes from the Wally West comics. She is a scientist who helps Barry understand and cope with his new powers of super speed.  The solid performances of the core cast make this show work despite its cartoony conventions. Barry Allen is an easy character to like because we can appreciate and empathize with his underdog-makes-good nature. Barry has always been inferior to his Dad and his overachieving older brother Jay. When he gains his extraordinary powers we can’t help but think that it couldn’t have happened to a more deserving guy.

Also noteworthy is the impish chemistry between Shipp and Pays. Their characters have an intimate, yet platonic relationship that is almost as charming as Pays’ accent. Alex Désert is underused as Barry’s friend and coworker, Julio Mendez. Désert’s easy-going, friendly presence provides a necessary counterpoint to Barry’s no-nonsense ‘get-the-job-done’ attitude. It’s too bad that he didn’t have more to do than set Barry up on blind dates and make wisecracks. The show was produced in the wake of the massive success of Tim Burton’s 1989 Batman film. The mood and tone of that movie is a huge influence on the first few episodes of The Flash, especially the Pilot episode, “The Origin of a Super Hero.” That episode begins with an establishing shot of Central City that is a blatant copy of the opening scene in Batman where we first see Gotham. We also see the same ‘evil steam’ shooting up from the sewers and citizens scurrying to get indoors, away from all the immoral activity that abounds on the mean streets of Gotham . . .er. . . Central City. Later on, the confrontation between Flash and the bad guy is also an obvious lift from Batman, complete with the “You made me!” line.

As the series progresses, it stops trying to ape the manner and feel of Batman and takes on more of a 1940s film-noir motif – only a lot more colourful. The ‘Tim Burton Effect’ still lingers though. One such pastiche, which ironically is not in the Pilot episode, is the use of period props such as 1950s automobiles. Burton can get away with such an aesthetic because his films often take place in an ambiguous timeline where stylistically, anything goes. In The Flash, the out-of-time props are an unnecessary distraction. They’re especially irrelevant during the episode titled “Ghost in the Machine” where The Ghost, a villain from the 1950s, comes out of a deep freeze to again wreak havoc on Central City in 1990. It’s hard to buy into The Ghost’s future shock when people are still wearing trilbies and driving around in Ford Fairlanes.

The show didn’t have great villains but like most genre entertainment, thinking is the real enemy. The Trickster, played by Mark Hamill, is definitely the show’s greatest and most memorable antagonist, even if he is just a check-in-the-box inclusion of a Joker-like homicidal clown. Hamill is great, playing the character as an obsessed, erotomaniacal master-of-disguise while the script, unfortunately, wants him to be a poor man’s Joker. Ironically, he would later go on to recycle his Trickster performance as the voice of the Joker on Batman: The Animated Series. Even Captain Cold works reasonably well within the context of the series, reinvented here as an albino mercenary with an ice gun. Actor Michael Champion plays the role relatively straight and plausible, as if shooting people up with frost is an everyday occurrence. He even gets to deliver the line, ‘The Iceman Cometh,’ six years before Arnold Schwarzenegger would as Mr. Freeze in Batman and Robin.

Michael Nader’s stone-faced overacting as outlaw motorcycle gang leader, Nicholas Pike is way too over-the-top to be taken seriously. Casting soap opera or sitcom actors as villains is always a bad idea. The difference between Hamill and Nader’s performances is that Hamill is trying to be humourous, Nader isn’t. David Cassidy and his widow’s peak are unfortunately a non-presence as Mirror Master in “Done with Mirrors.” He comes off as more of a Bizarro-Keith Partridge than a threatening adversary. One of the highlights of the series is “Fast Forward” where Flash is accidentally propelled 10 years into a bleak future where his powers are unstable. He’s got to find a way to get back to his own time and set things right. Every super hero / sci-fi show has to have its ‘evil parallel universe’ or ‘undesirable future’ story and The Flash is no exception. This episode reminds me of the 1960s Spider-Man cartoon where Spidey would be sucked into some twisted alternate dimension that he would have to fight his way out of. The scene where Flash is “falling” into the psychedelic void is a direct homage to that show. It really is an entertaining story if you can plow through the painful first act of Nader’s scenery chewing and hamming it up. 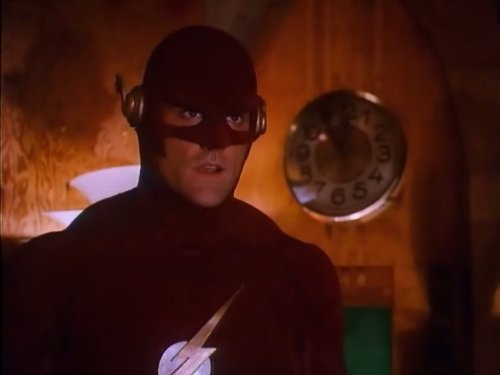 One episode that is way more endearing than it probably has any right to be is “Twin Streaks” where an obligatory mad scientist type tries to clone Flash and ends up creating a sort of Bizarro-Flash in a story that vaguely resembles Bride of Frankenstein. The laughs, intentional or not, are effortless. Bizarro-Flash or Pollux as he’s called, wears a blue Flash costume. It would have been a nice wink-nudge to the fans if they had given him a yellow suit as a reference to Professor Zoom, the Reverse-Flash. Zoom was mentioned in another episode, after all. One of the show’s major clunkers is “Be My Baby” where Barry has to care for an infant that was left on his doorstep. It’s nothing but recycled humour from 3 Men and a Baby and countless sitcoms. This episode reads like an attempt to inject some feel-good, warm fuzzy moments into the show. I actually felt sorry for the then-unknown Bryan Cranston, who had the thankless job of playing the bad guy on this one. If the show’s producers truly wanted to feature more heartwarming stories they could have done an episode or episodes that focused on the heroic endeavors that Flash has performed for the medical community. There was one story from Mike Baron’s run on the comic where Wally West was charged with transporting a human heart across the US to a transplant patient. Story lines such as these could have been an untapped goldmine of drama and suspense as long as they didn’t get too sappy with it. It also would have been a welcome break from the hit-or-miss villain of the week. 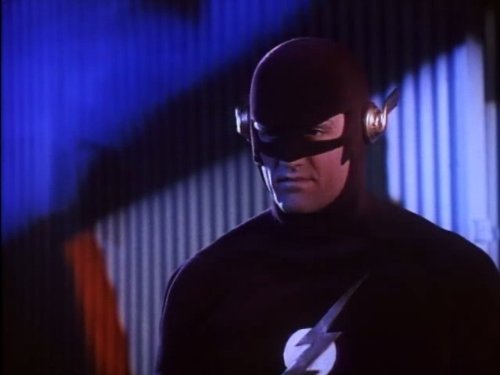 Shirley Walker’s score music is tailor made to suit the flavour of each individual episode. “Beat the Clock”, a story about a jazz musician falsely accused of killing his wife, appropriately has a lonely sounding Chicago jazz score while “Watching the Detectives” features music that evokes old private-eye films of the 1940s to compliment that episode’s subject matter. The Flash’s opening theme song is composed by Danny Elfman and sounds like a recycled version of his Batman theme. The Flash is a keen show that had the potential to be much greater than it was. Its adherence to the original source material and the earnest portrayal of the characters by the core cast give the series its irresistible allure. This is essential viewing for comic book and sci-fi fans and it definitely deserves a spot on your DVD shelf.