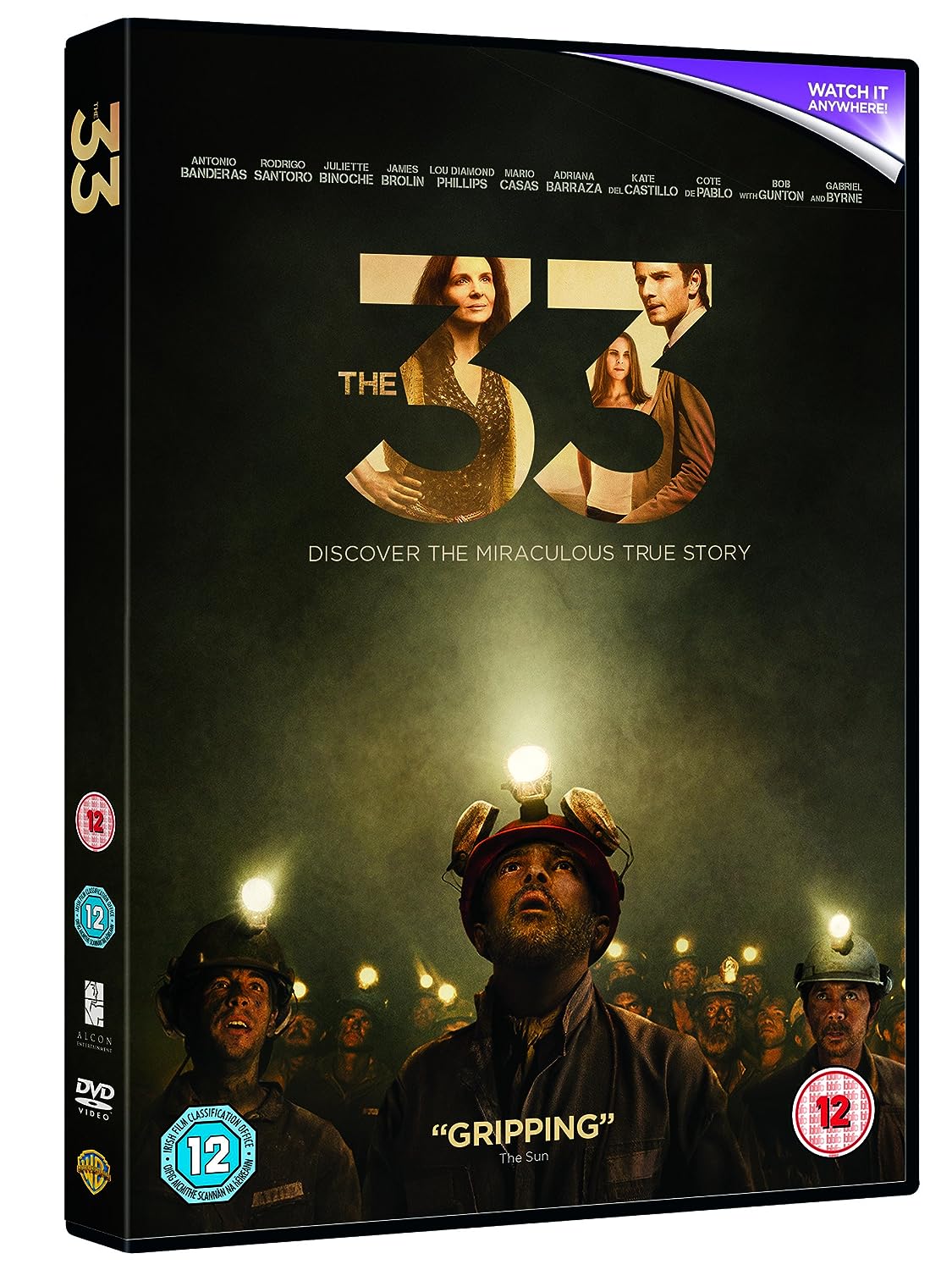 Dozens of people from Copiapó, Chile, work in the San José mine. The owner ignores the warnings of the failing stability of the mine, which collapses a short time later. The only path inside the mine is completely blocked, and the thirty-three miners manage to get to the rescue chamber. They discover that the radio is useless, the medical kit is empty, the ventilation shafts lack the required ladders, and there is very little stored food. Mario Sepúlveda becomes the leader of the miners, dividing the foods rations and stopping the outbursts of violence and despair. The mine company does not attempt any rescue, and the relatives of the miners gather around the gates.The government of Chile decides on active intervention, and orders the use of drills to reach the chamber. The first exploratory boreholes move off-target, but a later one reaches the required destination. The miners attach a note to the drill bit to announce their survival. They receive new food and clothing, and television communication with the surface. A second, bigger, drill system is prepared to retrieve the miners one by one.The 33 is exceptional. Based on the book “Deep Down Dark” by Héctor Tobar, the film version takes few liberties with the facts and fashions a very compelling narrative. The screenplay succinctly, but effectively sets the stage and develops its characters – both above and below ground. We feel the desperation of both the miners and their families. As the miners’ story unfolds, concurrently with that of their families and those attempting to rescue them, Patricia Riggens directs with great pacing (which is helped by nearly perfect editing). She also gets great performances from her cast and blends the talents and experience of well-known and little-known actors wonderfully. Although the movie did drag a little as it neared its dramatic conclusion, this is a film which tells its story with drama, sensitivity and even some humor.

In 1954, Godzilla, an ancient alpha predator, is lured to an island in an attempt to kill it with a nuclear bomb. In 1999, Project Monarch scientists Ishiro Serizawa and Vivienne Graham investigate a colossal skeleton unearthed in a collapsed mine in the Philippines. They find two giant spores; one dormant and one hatched with a trail that leads to the sea. In Japan, the Janjira Nuclear Power Plant experiences unusual seismic activity; Supervisor Joe Brody sends his wife Sandra with a team of other technicians into the reactor. A tremor breaches the reactor, leaving Sandra and her team unable to escape while the plant collapses.Fifteen years later in 2014, Joe’s son Ford, a U.S. Navy explosive ordnance disposal officer, returns from a tour of duty to his family in San Francisco but has to immediately depart for Japan after Joe is detained for trespassing in the Janjira quarantine zone. Joe is determined to find out the cause of the Janjira meltdown, and he persuades Ford to accompany him to their old home in the quarantine zone to retrieve vital data while discovering that the zone is not toxic. They successfully retrieve the data but are discovered by soldiers and taken to a secret facility in the power plant’s ruins. After several power failures, a giant winged creature emerges and escapes, destroying the facility. Joe is severely wounded and dies as he and Ford are taken by helicopter to the U.S.S. Saratoga. The incident is reported around the world as an earthquake.
Serizawa, Graham, and Ford join a U.S. Navy task force led by Admiral William Stenz to search for the creature, called a “MUTO” (Massive Unidentified Terrestrial Organism). Serizawa and Graham reveal to Ford that a 1954 deep sea expedition triggered the appearance of Godzilla and nuclear tests in the 1950s were really attempts to kill him. Project Monarch was established to secretly study Godzilla and other similar creatures such as the MUTO, which traveled from the Philippine mine to Janjira and caused the meltdown, and how they are connected with each other. Ford reveals that Joe had monitored echolocation signals that indicated the MUTO was communicating with something.
The MUTO attacks a Russian submarine and drops it on land in Hawaii to eat the sub’s nuclear material. Godzilla arrives, causing a tsunami in Honolulu and briefly engages the MUTO in battle, until it flees. Meanwhile, a second, larger, wingless MUTO emerges from the other spore in Nevada and devastates Las Vegas. The scientists deduce the second MUTO is female, the female was the one the male was communicating with, and that the two MUTOs will meet to breed in San Francisco. Over the scientists’ objections, Stenz approves a plan to use nuclear warheads to lure and destroy the monsters. Ford returns to the U.S. and ends up joining the team delivering the warheads by train, but the female MUTO intercepts the train and devours most of the warheads. The single remaining warhead is airlifted with Ford to San Francisco and is activated after a confrontation between the military and Godzilla at the Golden Gate Bridge. The male MUTO steals the warhead and takes it to the female, who forms a nest around it in the Chinatown area.
While Godzilla and the MUTOs battle, a strike team, including Ford, enters the city via HALO jump to find and disarm the warhead. Unable to access the timer, the rest of the team sets the warhead on a boat for disposal at sea. The MUTOs are eventually able to get the upper hand, but Ford blows up the MUTO nest, ultimately distracting the MUTOs enough to allow Godzilla to emerge victorious in the end, killing the male MUTO by slamming him with his tail into the side of an office building and the female by firing his atomic breath down her throat, beheading her. Godzilla then collapses on the city shore. With the rest of the team wiped out, Ford uses the last of his energy to get the boat with the warhead out to sea. He is rescued before the warhead explodes and reunites with his family at the Oakland Coliseum emergency shelter the following morning. Godzilla awakens, rising from the destroyed San Francisco, and returns to sea while the media hails Godzilla as “King of the Monsters – savior of our city?”.It’s a good solid and well made big screen action disaster monster movie that deserves multiple viewings. 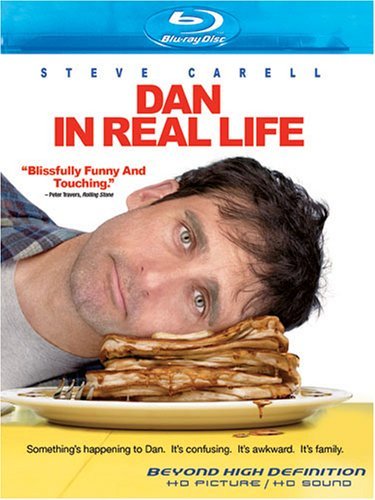 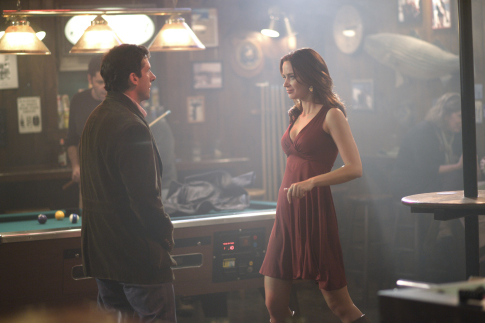 Dan Burns is a newspaper advice columnist, a widower, and single-parent to his three girls. The family takes a trip to the rambling, Rhode Island home of his parents for an annual family gathering. Also in attendance are Dan’s sister and brother with their families and Dan’s younger brother Mitch. 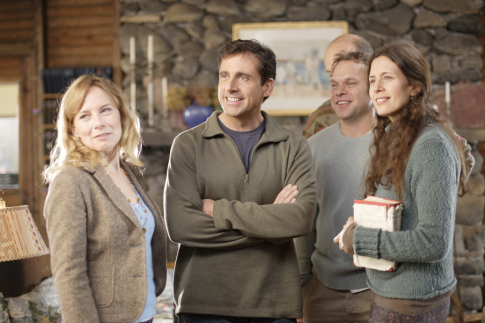 The morning after their arrival, Dan meets Marie in a bookshop. They share a muffin and a heart-felt chat, although Marie gently warns Dan that she has a boyfriend. Dan returns to his parents’ house and announces that he has ‘met someone’. Brother Mitch introduces his new girlfriend Annie. Lo and behold, Dan’s Marie is Mitch’s Annie. Dan is disheartened and resists his father’s relationship advice about finding someone of his own. 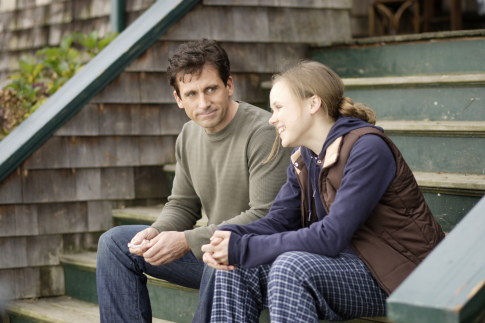 Dan reluctantly agrees to a foursome dinner with their once unattractive childhood friend, “pig-faced” Ruthie. Marie jealously watches Dan and Ruthie. The next morning, Dan endures her ‘punishment’ for his late night with Ruthie by eating the burnt pancakes which she serves him. Marie and Dan meet to talk at a bowling alley. The meeting evolves into a date and finally a passionate kiss, but unfortunately Dan’s entire family arrives to bowl. Mitch punches Dan in the face, and Marie hurries out 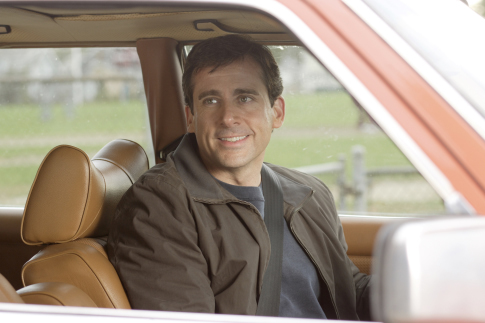 The plot resolves with Dan and his daughters going to New York City, where they finally find Marie at her gym. As he makes eye contact with her, Dan, in voice-over, tells the readers of his advice column that instead of merely planning ahead in life, they should “plan to be surprised”. The film ends with Dan and Marie celebrating their wedding at his parents’ Rhode Island home, and Mitch happily dancing with Ruthie. 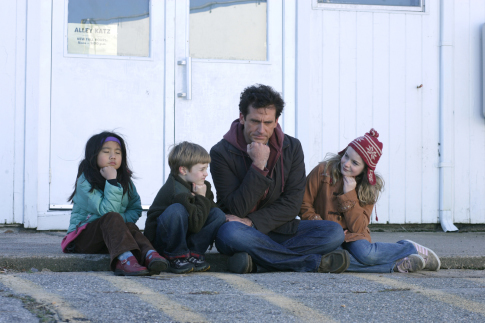 Dan in Real Life is a great film, a fantastic escape from the redundancy of offensive and dumbed-down comedies. The quality of the writing, directing, acting, and (especially) cinematography is excellent. It is simply a beautiful, light-hearted comedy.