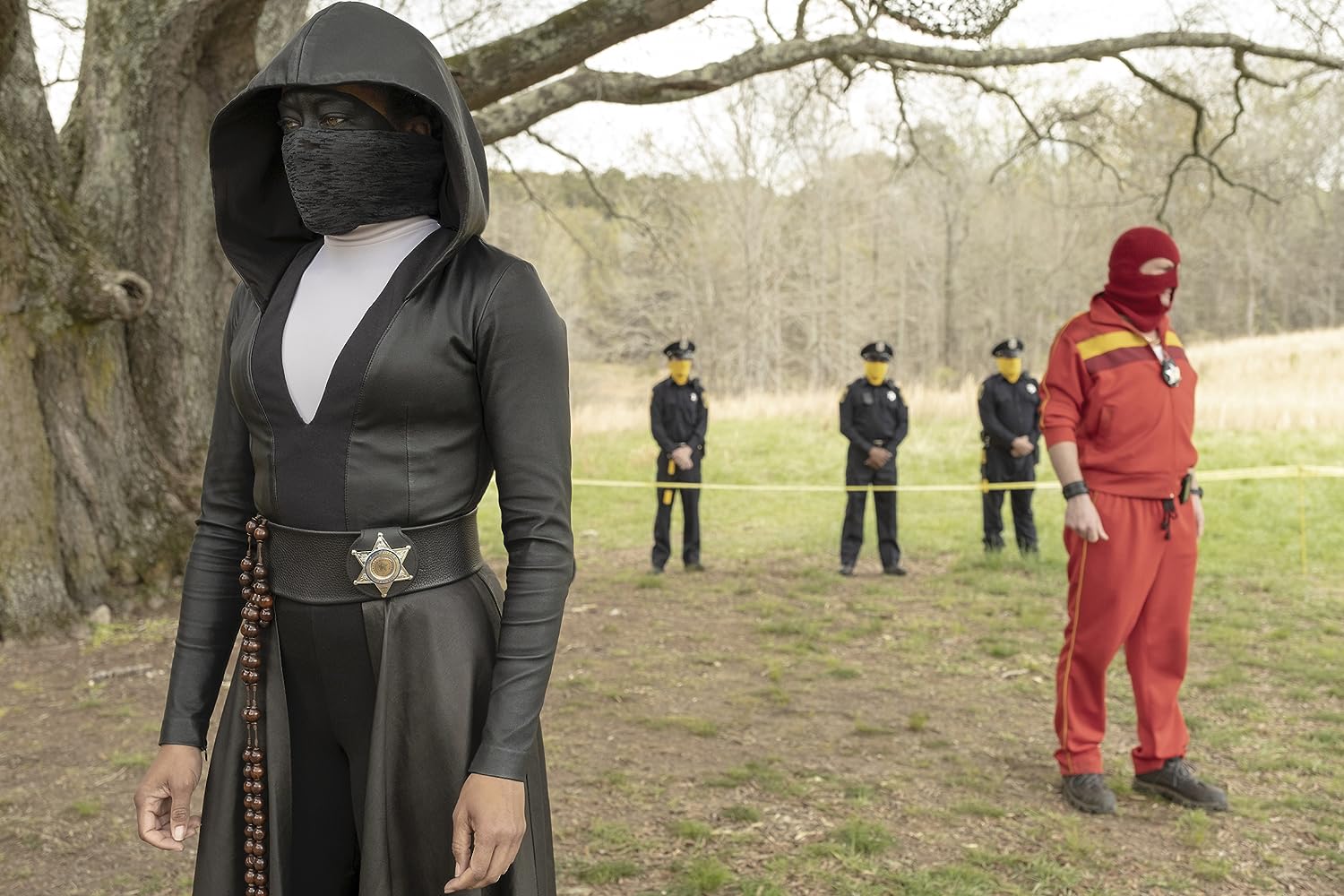 Watchmen is a bold, ambitious show. There’s no mistaking it for some wallflower or small, quiet drama. This is a big-budget, high-profile production that declares its presence. You can’t ignore it and you wouldn’t want to because it’s extremely compulsive viewing. The latest offering from HBO, the nine-episode Watchmen is based on Alan Moore and Dave Gibbons’ iconic and beloved 1980s comic book series of the same name.Before you roll your eyes and chuck a Scorsese or Coppola and go, “oh, it’s a comics thing,” know that Watchmen strikes a hard-to-achieve balance between spectacle and groundedness. And you don’t need to be familiar with the comics or the 2009 Zack Snyder movie adaptation to dig in. Created for TV by Lost and The Leftovers’ Damon Lindelof, this version of Watchmen has been described as more of a companion series. Lindelof explained it as, if the comics were the Old Testament, then this series is the New Testament — and there are still plenty of Easter eggs and direct references for old fans.The original comics were set in the mid-1980s and the TV show time jumps to our present day, 2019. So it’s set some 30 years after the events of the books, and only carries over a handful of the characters. The world of Watchmen is similar to ours except there’s no internet, throngs of tiny squid sometimes rain from the sky and Robert Redford has been the US president since the 1990s.The early focus is on Angela Abar (Regina King), a Tulsa, Oklahoma police detective whose masked persona is known as Sister Night. To the outside world, she’s a retired cop after a calamitous event some three years earlier. But in reality, she’s one of legion of masked cops who now have to hide their identities for fear of retribution against them and their families — despite the fact vigilante heroes are now outlawed.The villain(s) of the series is a white supremacist group called The Seventh Cavalry who have co-opted the now-dead anti-hero Rorschach’s image on their masks. They’re the ones who are violently targeting police in Tulsa. But when both the good guys and the bad guys wear masks, who can you really trust? In Watchmen, the police go too far, meting out extrajudicial justice with little hesitation. At one point, one character says to another, “You know how you can tell the difference between a masked cop and a vigilante?” to which the other responds, “No”. While the show exists in an alternate version of our world and many of its markers feel heightened and exaggerated, it feels very resonant of America in 2019. The series is racially charged and declares itself so in the opening sequence which is a dramatisation of the real-life Tulsa race riots in which white mobs killed hundreds of African-Americans and injured even more.Watchmen plays in the grey space between black and white with its moral complexity. While we follow Angela, she also commits acts we personally wouldn’t approve of from our own law enforcement. This constant negotiation of our empathies is the kind of layered storytelling Lindelof excels in, having done so previously in The Leftovers, another HBO series. Watchmen is packed with striking visuals — the first two episodes are directed by Nicole Kassell — and the production values are extraordinary, including a visceral score by Trent Reznor and Atticus Ross. Clearly a lot of money has been spent and it shows. The pilot episode is strong and has a great twist that guarantees you’ll be back for more. It also features compelling performances from Oscar winner King, Don Johnson as Tulsa police chief Judd Crawford, Tim Blake Nelson as Looking Glass and Louis Gossett Jr as the mysterious Will Reeve. These are new characters to the Watchmen world.Among the comic original characters, there’s Jeremy Irons as Adrian Veidt, also known as Ozymandias, who is now exiled (as it were) in a luxurious country estate where he delights in strange games with his strange servants. But it’s Jean Smart as Laurie Blake/Silk Spectre who steals the third episode, which is her first appearance. The former superhero is now working for the FBI in the anti-vigilante squad and her combination of no-bullshit tenacity, concealed vulnerability and killer instincts make her a magnetic character. The very blue-hued and powered Doctor Manhattan will also appear. Watchmen is a thrilling and scintillating series that is sure to find armies of fans, old and new, who will undoubtedly be besotted. You might as well see for yourself what they’re all going to be obsessing about.