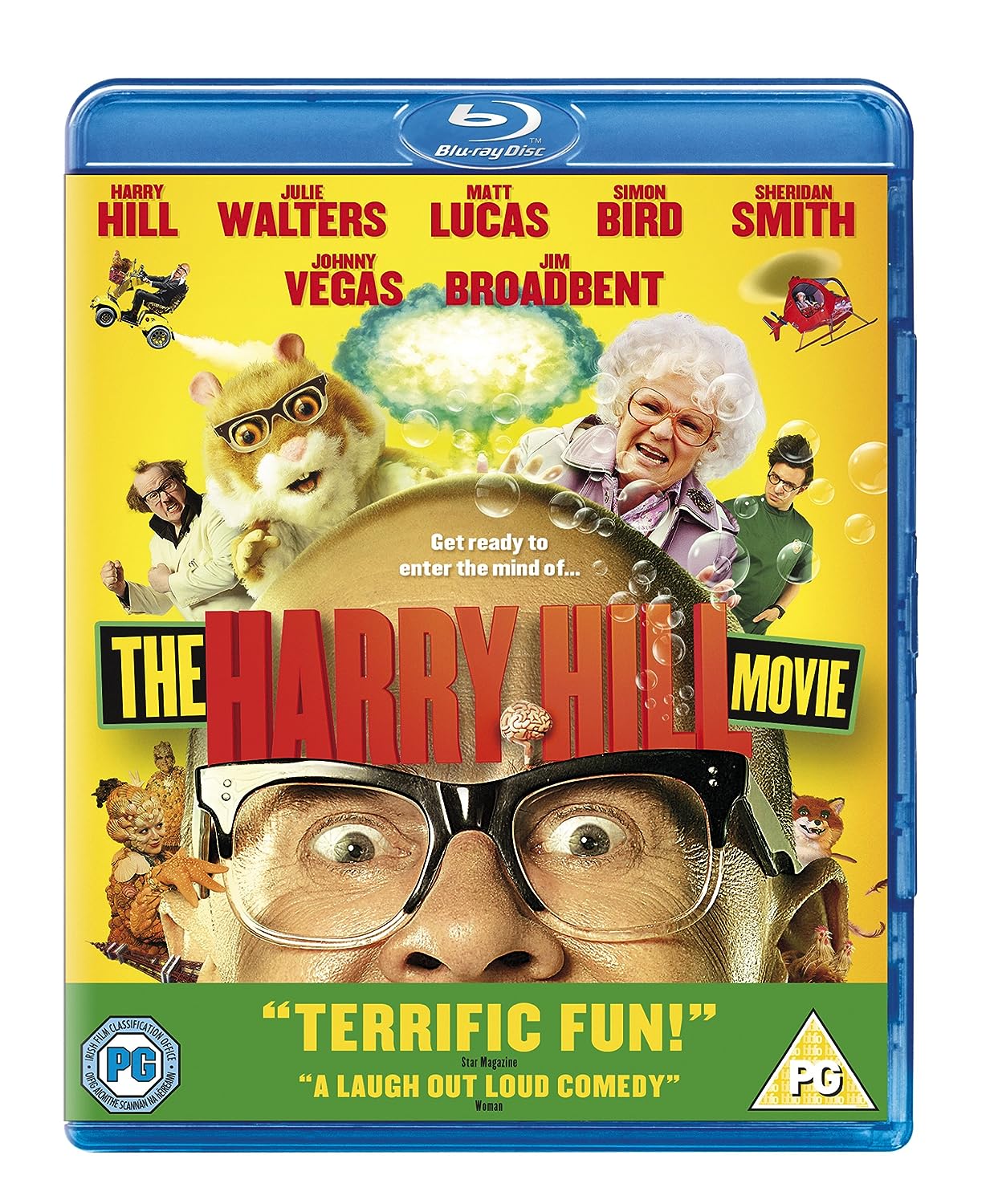 The movie begins with an electric scooter chase between Harry and his nan because she didn’t know it was him. Afterwards, Harry is sent to get a chicken for lunch, but they fire a machine gun at him and throw a grenade, which Harry throws into the chicken shed, blowing them up. They then discover that their beloved pet hamster Abu is ill so they take him to the vet. He is almost put down until Harry takes him back home. Ed the vet and his assistant, Kisko, are working for Harry’s neo-Nazi twin brother Otto who was abandoned by his nan in the 1970s, claiming it was because she couldn’t look after them both, and raised by dogs.

After another failed attempt to capture Abu (by disguising as a priest and a nun), Harry and his nan decide to take him on a trip in their Rover P6 to Blackpool for a week before he dies. Ed and his assistant pursue them on the road, until they arrive in “Blackpole” by mistake. The next day, Harry and his nan take Abu on a personal guided tour around the nuclear power plant by the cleaner. Ed and Kisko attempt to capture him again only for him to end up turned into a destructive giant caused by radiation which wears off shortly. While walking on the beach they encounter Barney Cull, a member of the Shell People.

He asks Harry and the others to save his people’s children from a gift shop. They succeed and they are invited back to the Shell People’s cave where Harry falls for the Shell King’s daughter, Michelle. He leaves after being unable to cope living under water. They continue their road trip only to end up in a boxing match where Harry has to fight Kisko to keep Abu. He successfully wins with a free stick of rock. Later on, the car runs out of petrol in the middle of the woods and Harry and his nan leave Abu behind while they search for a petrol station. He’s almost kidnapped again by Ed and Kisko only to leave the car in pieces.

Meanwhile, Otto teams them up with a master of disguise fox. Harry, his Nan and Abu hitch a ride with Justin Bieber and Selena Gomez (actually Ed and Kisko in disguise) and they arrive in Blackpool to see a show. After they finally arrive there, Harry is reunited with Michelle (much to his Nan’s dismay) and Abu is finally kidnapped and replaced with the fox. Harry later finds out and they go looking for Abu. They follow a trail of steak barbecue hulahoops (which is what Otto was left with to eat when he was abandoned) to his hideout where he reveals his plan to turn Abu into a model figurine for his collection as an act of revenge for being deserted. During a fight between the two, Harry’s nan reveals that she got rid of Otto because she kept getting him and Harry mixed up. After being chased away by killer brains, Harry and his nan are saved by the Shell People, to which his Nan accepts his and Michelle’s love. Harry pursues his brother to the top of the Blackpool tower.

His Nan rescues him and Abu in a helicopter when Otto falls to the ground after taking a punch from Kisko after he and Ed thought they were working for the wrong brother. After defeating Otto, Abu coughs up a green felt tip pen which turned out to be the cause of his illness. Ed explains that hamsters like sucking on pens and he gave it to Abu so he would be sick and start this whole plan, even though he could’ve kidnapped Abu at the time. Abu lives and the movie ends with a big end song with everyone in the film. Just before the final credits, a hamster appears on screen, riding on a model train. He gets off at the model station when the train stops. The hamster can only be thought to belong to Harry Hill, but there is no evidence for this.

Its a madcap, surreal, silly mayhem. The film rather lulls in the middle when you feel its run out of steam and laughs. The humor is a bit hit and miss, however switch your brain off,  and it is mildly entertaining and amusing. 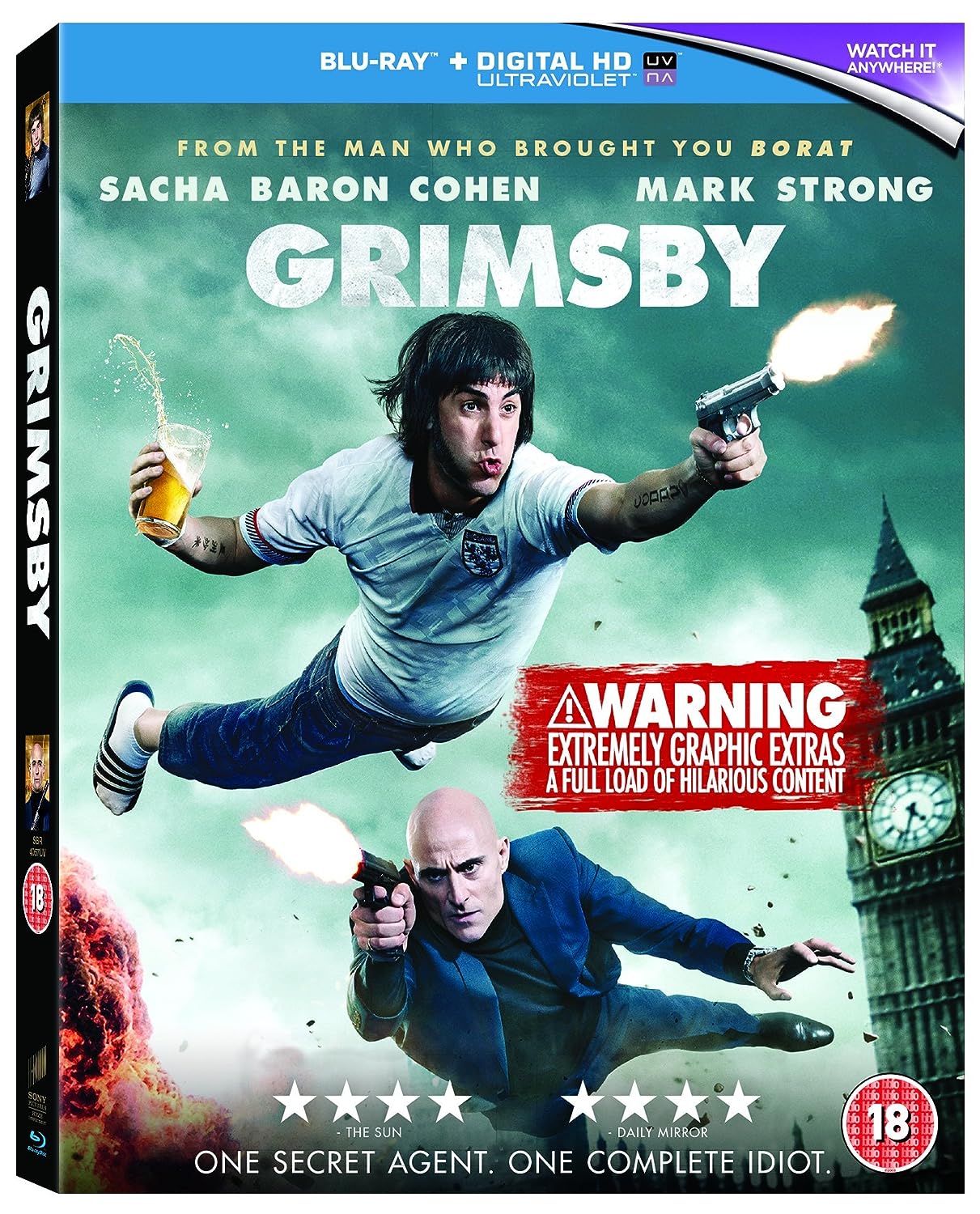 Nobby Butcher (Sacha Baron Cohen) has been separated from his brother Sebastian for 28 years. During the 28 year separation, Nobby has become alcoholic and has started his own life with his wife Dawn (Rebel Wilson) and 11 children in the poor English town of Grimsby.

Sebastian (now Sebastian Graves) has become one of MI6’s top agents. After completing an interrogation, Sebastian comes into information regarding philanthropist Rhonda George (Penélope Cruz), who is hosting a benefit called WorldCure and is a potential target for assassination, and is assigned to go. Nobby’s pub friends also find out that his brother will be at WorldCure and convince Nobby to go and reconnect with him. Sebastian goes to the event and sees a hitman, later known as Pavel Lukashenko (Scott Adkins), who plans to assassinate Rhonda with a gun disguised as a video camera. As Sebastian prepares to shoot the camera, Nobby sees him and gives him a hug, accidentally causing him to shoot a Jewish-Palestinian boy with AIDS. The spray of blood lands in Daniel Radcliffe’s mouth, giving him AIDS.

The brothers go on the run from the authorities and other assassins, with Sebastian breaking his ankle in the process. Despite Sebastian’s protests, Nobby convinces him it would be best to hide at his home in Grimsby. Meanwhile, MI6 believes that Sebastian has gone rogue. The MI6 send orders to an assassin named Chilcott (Sam Hazeldine) to track Sebastian down. However, Sebastian calls his handler Jodie and proclaims his innocence.

Chilcott and his men find the two brothers at a pub. Sebastian and Nobby spot them and run away with help from the pub clientele, but Sebastian is hit with two poison darts in the process. Nobby is forced to first suck the poison out of his brother’s chest and then his testicles to save him. The brothers travel to South Africa, after Jodie informs Sebastian that Lukashenko was doing a deal with Joris Smit (Nick Boraine) in Tshukaru Bush Lodge. Sebastian accidentally injects himself with heroin, mistaking it for the bone strengthening treatment for his broken ankle. Nobby must assume his identity and go undercover. Nobby tries to seduce Joris’s wife Lina, but first seduces the wrong woman and is then interrupted by Joris and his two men. Sebastian arrives and saves Nobby. Lina tells them that Lukashenko bought some sort of virus, but she is fatally shot by Chilcott and his men from a distance before she gives any further information. To outrun Chilcott’s men, the brothers hide inside an elephant’s vagina, but in the process they become trapped inside after a male elephant begins having sexual intercourse with it. As they wash off afterwards, Sebastian asks why Nobby abandoned him as a child. Nobby explains that Sebastian’s adoptive parents only wanted to adopt one of the brothers but were unable to decide, and he ran away so Sebastian could have a better life. 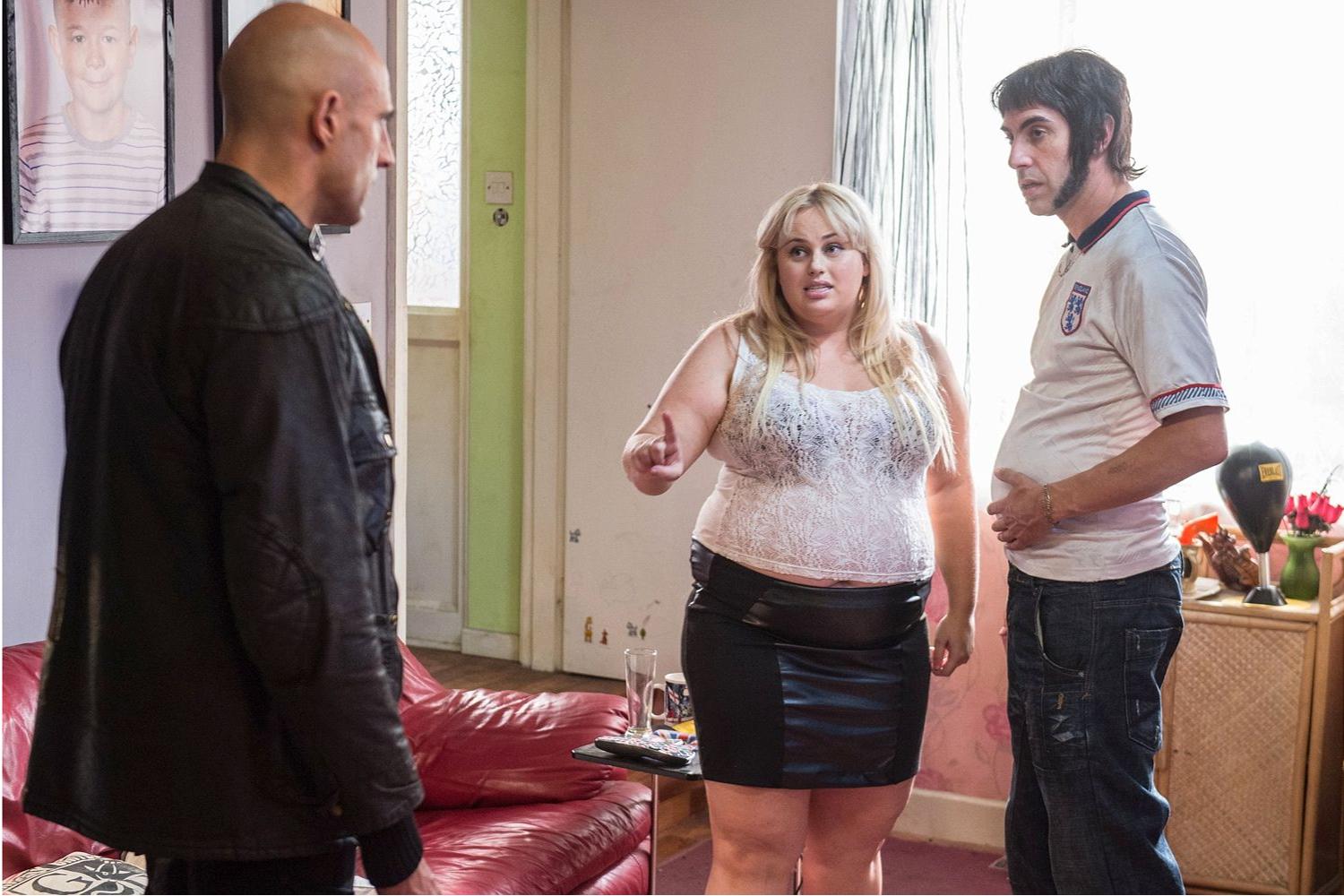 The two brothers travel to Santiago, Chile. They realize that the syndicate plans to unleash their weapon upon a football match in the area, but the syndicate captures Sebastian. Rhonda visits the captured Sebastian and tells him her plans to launch the virus—called WorldCure—into the arena via fireworks. Nobby finally finds Sebastian, but he is intercepted by Lukashenko. Lukashenko overpowers Nobby, but he obtains Lukashenko’s gun and shoots him in the head. He easily kills the other henchmen before rescuing Sebastian.

The brothers go back to the arena and spot Rhonda. While Nobby tries to intercept Rhonda, Chilcott attempts to kill Sebastian, but Nobby’s kids throw a wheelchair at him, knocking him over and impaling on a helmet. Nobby obtains a gun and spotted Rhonda running through the arena. He goes after her. In the meantime, Raheem Sterling in the final match between England and Germany attempts a shot from a distance, however, the shot was going wide. Nobby shot the ball and it conveniently deflected into the goal. Nobby also shot the referee who’s going to disallow the goal, resulting in England winning the match. Nobby then tries to shoot Rhonda but his gun jams and he realizes he must stop the fireworks himself. He sits on one of the fireworks containing the virus; Sebastian sits on the other at the last minute, reaffirming his brotherhood with Nobby. The fireworks go off with the two atop them and the brothers are knocked unconscious upon landing. Nobby’s gun goes off and hits Daniel Radcliffe, whose infectious blood spills onto Donald Trump’s mouth.

It is reported that Rhonda is arrested, the Graves brothers “died” after saving the world, and Donald Trump has AIDS. The brothers are actually recovering in the hospital. Jodie visits and gives them new identities, informing them that the virus did not affect them because its antidote is elephant semen. Nobby’s family also visits them. In the final scene, eight weeks later, Nobby and Sebastian are on a mission in Jakarta, Indonesia. On a boat, Nobby is approached by a team of gunmen, who he quickly kills. He reaches Sebastian, who asks him if he’s met the team; Nobby realizes too late that the gunmen were his team. In a post credit scene the brothers are in a car and stop to ask a man for directions to the stadium, after receiving directions Nobby shoots the man saying ‘leave no witnesses’ disturbing Sebastian. 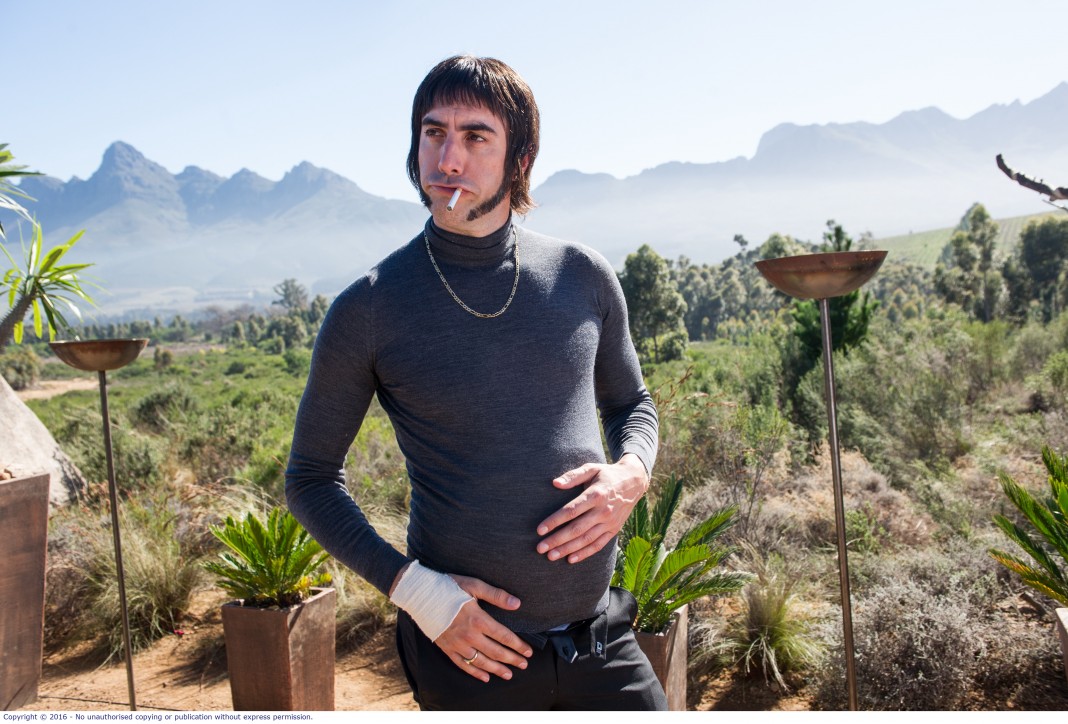 Grimsby also known as The Brothers Grimsby in America. This is one of the best comedy  movies released and definitely worthy of repeat viewings if you’re a fan of this type of comedy, and especially if you appreciate Sacha Baron Cohen’s brand of humor.