When a naïve young Dorian Gray arrives in late Victorian London, by train, to inherit an estate left to him by his abusive grandfather, he is swept into a social whirlwind by the charismatic Lord Henry Wotton, who introduces Gray to the hedonistic pleasures of the city. Lord Henry’s friend, society artist Basil Hallward, paints a portrait of Gray to capture the full power of his youthful beauty. When the portrait is unveiled, Gray makes a flippant pledge: he would give anything to stay as he is in the picture—even his soul. 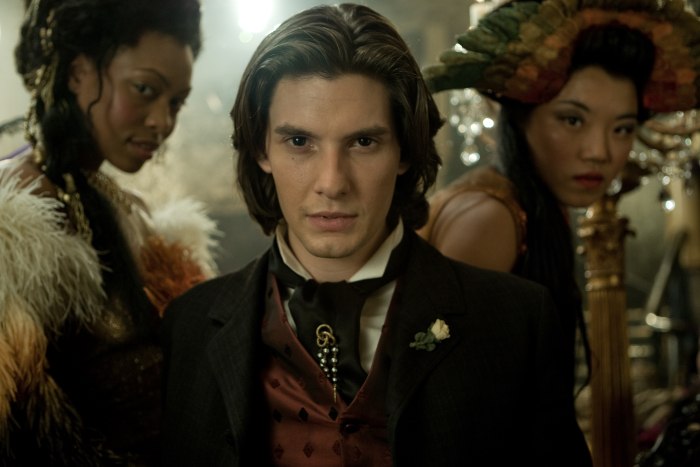 Gray meets and falls in love with budding young actress, Sibyl Vane. After a few weeks, he proposes marriage to her. Lord Henry tells Gray that having children is “the beginning of the end”, and after the two men visit a brothel, Gray leaves Sibyl. Heartbroken, the young woman drowns herself. Gray learns of her death the following day from her brother, James (“Jim”), who also reveals that Sybil was pregnant with Gray’s child. Enraged, Jim tries to kill Gray before being restrained and carried off by the authorities. Gray’s initial grief soon disappears as Lord Henry persuades him that all events are mere experiences and without consequence. His hedonistic lifestyle worsens, distancing him from a concerned Hallward.Gray returns home one evening to find that Hallward’s portrait of him has become warped and twisted, and he soon realises that his off-hand pledge has come true; while the portrait ages, its owner’s sins manifest as physical defects on the canvas. Before long, the curse imbued within Gray’s portrait begins in earnest, resulting in Hallward’s brutal murder after the artist reveals his secret. Gray dismembers and dumps Hallward’s body in the River Thames, although the remains are soon recovered and buried. 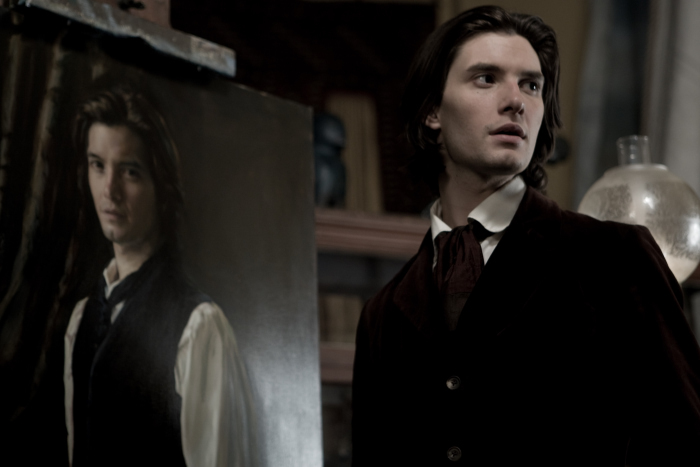 Gray then leaves London to travel for many years, inviting Lord Henry to come with him although Lord Henry declines because of his wife’s pregnancy. Gray returns to London and during the welcome back party the guests are surprised to see that he has not aged at all during his 18-year absence. He becomes close to Lord Henry’s daughter, Emily, a member of the UK suffragette movement, despite Lord Henry’s distaste for such a relationship because of Gray’s lifestyle and unnatural appearance, Emily having provided Lord Henry with a greater moral focus and having changed him for the better. Although Gray appears genuinely interested in changing his ways as he spends time with Emily, matters are complicated when he is confronted by Jim, still seeking revenge for his sister’s death. Despite Gray’s attempts to pretend to be someone else by pointing out his apparent age, Jim nevertheless deduces Gray’s true identity, only to be killed by a train while pursuing Gray in the London Underground. As Gray makes arrangements to leave London with Emily, Lord Henry’s study of old photographs makes him remember the time when he teased Gray to deal with the devil for eternal youth and beauty at the cost of his soul. 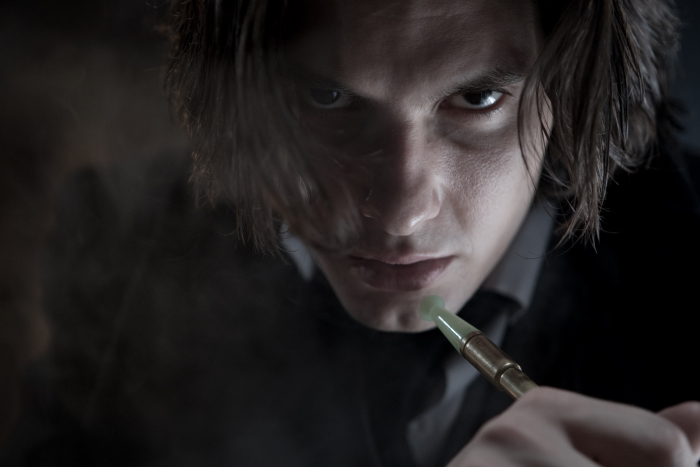 Breaking into Gray’s house as Gray and Emily are making plans to leave together, Lord Henry discovers the concealed portrait, but is interrupted by Gray before he can uncover it. Although Gray attempts to convince Lord Henry that he still cherishes his friendship and genuinely loves his daughter, Lord Henry discovers the stained scarf of Basil in a box, prompting Gray to declare angrily that he is what Lord Henry has made him, the personification of the life Lord Henry preached but never dared practise. Full of anger and grief, Gray attempts to strangle Lord Henry but is distracted by Emily’s call long enough for Lord Henry to knock him aside and expose the portrait.Disgusted and horrified at the twisted sight on the canvas, Lord Henry throws a lit lamp at the portrait, causing it to catch fire, and then locks the gate of the attic to ensure that Gray and the painting are destroyed. Emily pleads with her father for the key. After seeing her and realising that he really loves her, he turns his back. As Lord Henry drags his daughter out of the house, Gray’s last words are to assure Emily that she has his whole heart. Resolving to end it all, Gray stabs the painting with a poker, causing his body to age the years that it has never suffered, Gray charging at the portrait to impale it as his years catch up to him before the attic is consumed by an explosion.

A few months later, scarred from the explosion and after a futile attempt to reconcile with Emily over the phone, Lord Henry heads to his attic where he keeps the now-youthful portrait of Gray, grimly noting that nobody will look at it now. As Lord Henry leaves, the portrait’s eyes glow, suggesting that Gray’s soul may still be within the portrait even after his death. 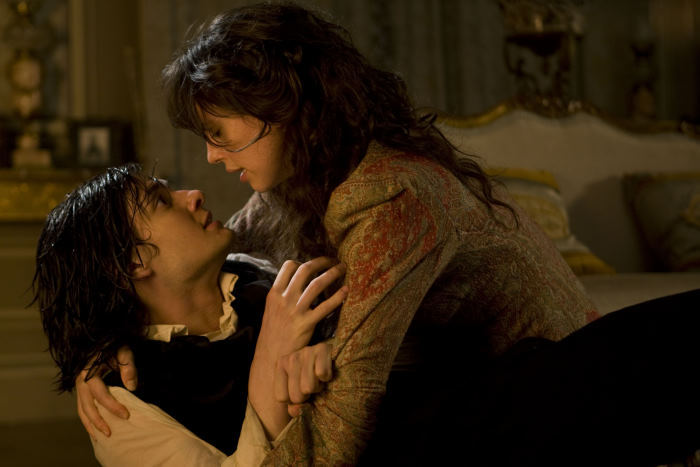 The story has seen many adaptations down the years, and i’m certain will see many more in the times to come, however, in my opinion this is far and away the best to date. This is an excellent film, it would be a crime in my view to miss it. 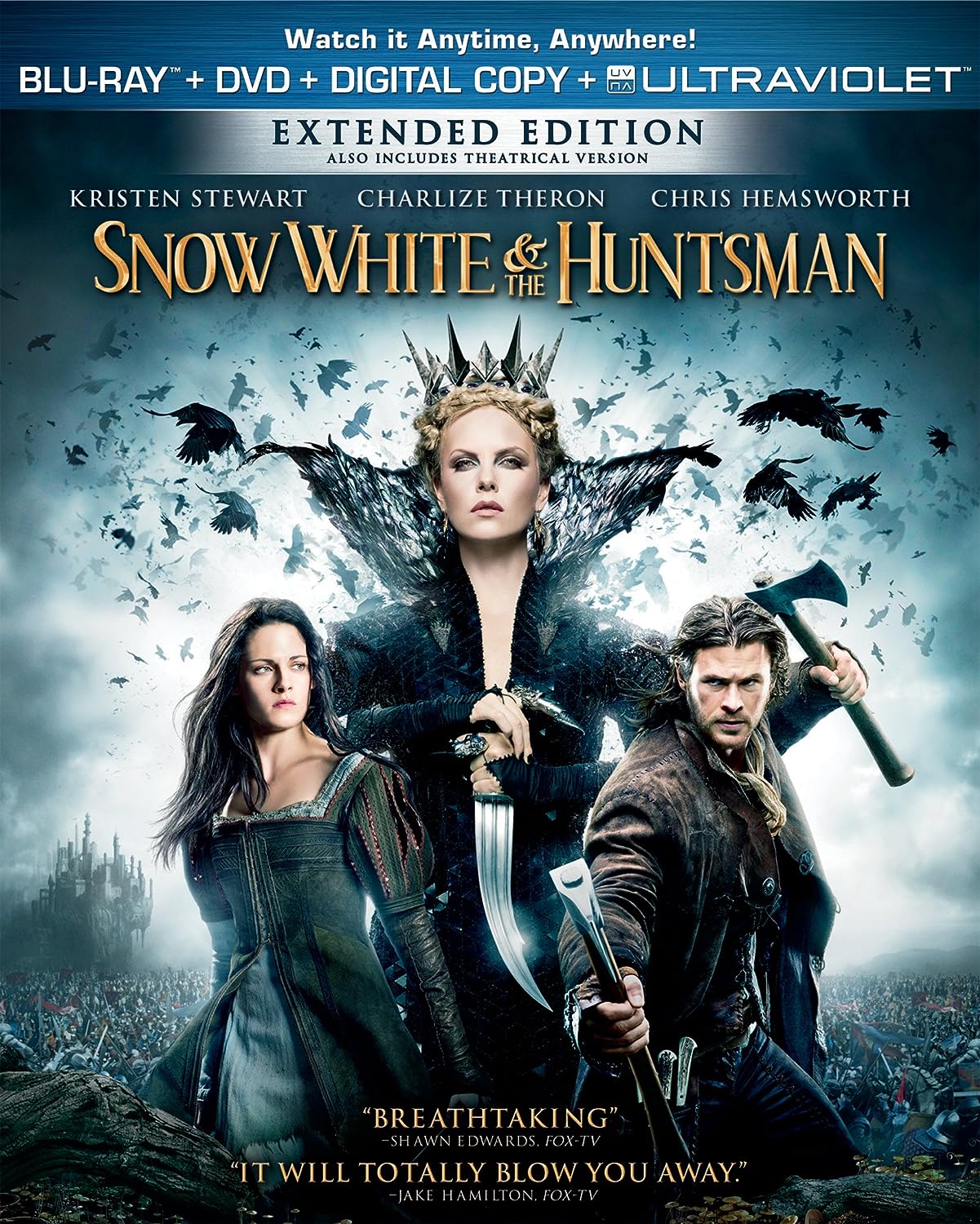 While admiring a rose blooming in the winter, Queen Eleanor of the Kingdom of Tabor pricks her finger on one of its thorns. Three drops of blood fall onto the snow-covered ground, and she wishes for a daughter as white as the snow, with lips as red as the blood, hair as black as a raven’s wings and a heart as strong and defiant as the rose. Queen Eleanor gives birth to her daughter Snow White, but soon after falls ill and dies. After her death, Snow White’s father, King Magnus, and his army battle an invading Dark Army of demonic glass soldiers. Upon rescuing their prisoner Ravenna, he becomes enchanted with her beauty and marries her.

Ravenna, who is in fact a powerful sorceress and the Dark Army’s master, kills Magnus on their wedding night. On the night, Magnus, enchanted, throws Ravenna into the bed and proceeds to make love. Ravenna confesses there was a king much like Magnus that spoiled her. During foreplay, she declares she cannot be a weak queen and kills Magnus. Snow White’s childhood friend William and his father Duke Hammond escape the castle but are unable to rescue her, and she is captured by Ravenna’s brother Finn, and locked away in the north tower of the castle for many years.

Tabor is ruined under Queen Ravenna’s rule as she periodically drains the youth from the kingdom’s young women in order to maintain a spell cast over her as a child by her mother which allows her to keep her youthful beauty. When Snow White comes of age, Queen Ravenna learns from her Magic Mirror, in the form of a golden, reflective liquid shaped like a man, that her stepdaughter Snow White is destined to destroy her unless Queen Ravenna consumes the young girl’s heart, which will make her truly immortal. Queen Ravenna orders Finn to bring her Snow White’s heart, but she escapes into the Dark Forest, where Ravenna has no power. Queen Ravenna makes a bargain with Eric the Huntsman, a widower and drunkard, to capture Snow White, promising to bring his wife back to life in exchange. The Huntsman tracks down Snow White, but when Finn reveals that Queen Ravenna does not actually have the power to do what she promised, the Huntsman fights him and his men while Snow White runs away. When the Huntsman catches up with her, she promises him gold if he will escort her to Duke Hammond’s castle. Meanwhile, Finn gathers another band of men to find her, and Duke Hammond and his son William learn that she is alive. William leaves the castle on his own to find her, joining Finn’s band as a bowman.

The Huntsman and Snow White leave the Dark Forest, where she saves his life by charming a huge troll that attacks them. They make their way to a fishing village populated by women who have disfigured themselves to save their own lives, becoming useless to Queen Ravenna. While there, the Huntsman learns Snow White’s true identity, and initially leaves her in the care of the women. He soon returns when he sees the village being burned down by Finn’s men. Snow White and the Huntsman evade them and eventually meet a band of eight dwarves named Beith, Muir, Quert, Coll, Duir, Gort, Nion, and Gus. The blind Muir perceives that Snow White is the daughter of the former king, and the only person who can defeat Ravenna and end her reign. As they travel through a fairy sanctuary, the group is attacked by Finn and his men. The Huntsman battles Finn and kills him, and William reveals himself and helps defeat Finn’s men. However, Gus is killed when he sacrifices himself to take an arrow meant for Snow White. William joins the group which continues the journey to Hammond’s castle.

Halfway to Duke Hammond’s castle, Queen Ravenna disguises herself as William and tempts Snow White into eating a poisoned apple, but is forced to flee when the Huntsman and William discover her. William kisses Snow White, whom he believes to be dead. She is taken to Hammond’s castle. As she lies in repose, the Huntsman professes his regret for not saving Snow White, who reminds him of his late wife, Sara, and he kisses her, breaking the spell. She awakens and walks into the courtyard, and rallies the Duke’s army to mount a siege against Queen Ravenna. The dwarves infiltrate the castle through the sewers and open the gates, allowing the Duke’s army inside. Snow White confronts Queen Ravenna, but is overpowered. Queen Ravenna is about to kill Snow White and consume her heart, but Snow White uses a move the Huntsman taught her and seemingly kills Queen Ravenna, and Duke Hammond’s army is victorious. With Queen Ravenna defeated and dead, the kingdom once again enjoys peace and harmony as Snow White is crowned Queen and she and the Huntsman exchange looks before it cuts to chants of “Hail to the queen!”

This film is not going to win many awards, nor will it be a favorite of the year, but it is entirely a good movie. Stunning visual effects, many great landscape shots, good acting, great action, and a believable storyline. This is not the Disney film you are used to, but a much grittier and more mature take on the original tale.