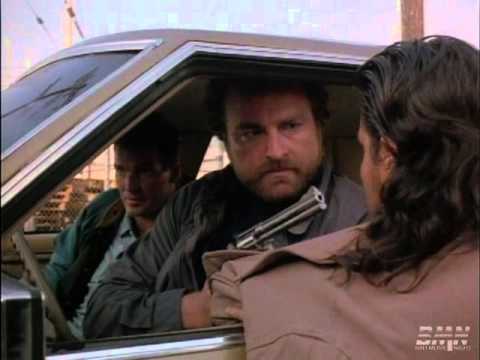 The victim of the movie is a female singer, who perfectly sends up the ‘damsel in distress’ caricature which frequents so many 1980’s blockbusters. By playing her helplessness to the extreme, the director really mocks the patriarchal overtones so many Action movies seem to possess . In one scene, the female character is left in a prison cell with Jake Swan. Jake is trust up like a chicken, while she is free to roam around for corn, and yet the dynamic of the situation is clear – he is still the power-holder and the one who is expected to lead the escape, while she shrivels in the corner wailing like a ruddy banshee. Much like Sacha Baron Cohen parodied xenophobia with Borat, this scene brilliantly parodies the ‘poor useless girl’ movie stereotype, in a comical (albeit not-very-subtle) manner. Later, the singer dies.

The villains of this movie brilliantly parody typical Hollywood ‘Baddies’ of this era – Foreign, Greasy and One Dimensional. Despite Mexican being their mother tongue, the criminals speak English to each other even when there are no Americans in the scene – what more of a perfect way to encapsulate on screen the spreading of White Western Power and the homogenisation of American Culture. The main character, Jake Swan, deserves a paragraph to himself. His bulking frame is the first clue that this is a man who satirises Movie Macho Men to the hilt. By purposefully making the character as bland, violent and one dimensional as the criminals he is fighting, the Director cleverly highlights everything that is wrong with Hollywood’s love of vigilantism. Throughout the film, the audience are forced to question who really is the villain of the show as Jake Swan, the supposed ‘Hero’ of this masterpiece, becomes more and more unlikeable. His thirst for violence and total disregard for the rules actually cost more lives and cause more damage than the real villains do. Jake’s relationship with his stepson is a can of worms that I could open and talk for hours about, but I wont due to the word limit I am fast approaching. All I will say is that their Step father/son relationship Is a fantastic representation of the modern American family – broken and struggling. One Man truly is a Force – a Force of nature, that is. it’s a cheesy actio nthats so bad it’s actually good.

I knew a couple of people who enjoyed the Superboy TV show (later re-named the Adventures of Superboy) when it was airing in the late 80’s and early 90’s. Running for four seasons in syndication, the program had a fair following. Iyla & Alexander Salkind who were behind the 80’s Superman films. This first season takes a good few episodes before it becomes the hidden gem it was destined to be.

A majority of the villains are your run-of-the-mill crooks too. Though there are some aliens who cause some trouble, but the majority of the foes are just ordinary people, and that doesn’t make for an exciting program.

The actor playing Lex is really bad, which is why from season two hje was replaced. The worst acting job award goes to Michael J. Pollard who played the 5th dimensional magical imp Mr. Mxyzptlk. This nemesis, taken straight from the comics and appearing in an episode written by comic legend Denny O’Neil would have been a lot better if Pollard had ever read one of the comics or even had a basic understanding of the character. He plays the mischievous menace without any of the humor or light-heartedness that makes his comic appearances so memorable. All of the imp’s lines are delivered in a flat monotone and the actor never gets in the spirit of the character. The show does improve over the course of the season, and was fun to watch. The Beast and Beauty where a someone dresses up as Superboy and robs stores was good, and the final episode in the season, Luthor Unleashed, was arguably the best. In this show a young Luthor steals a secret weapon and agrees to sell it to the person who can kill Superboy. They also adapt Luthor’s origin from the comics which worked very well. If the whole series was as good as this episode it would have been more  enjoyable