It seems we can always rely on The Flash to deliver a great mid-season finale that’s not just a brilliant instalment of the show, but also an unashamed Christmas episode with presents, Turkey and festive soul-searching for our viewing pleasure. I’d even be tempted to say that this, Running To Stand Still, was one of the strongest episodes the show has delivered so far this season, what with the effortless mix of great villains, attention given to the relationships between characters and some nice forward momentum for the Zoom story thread. We begin with Zoom running Wells down before wishing him a particularly threatening ‘Merry Christmas’, setting the tone for the rest of the episode before we flit back to our main gang. It wasn’t much of a secret that Mark Hamill would be returning as the Trickster, but pairing him up with the Weather Wizard was a stroke of genius. The Trickster is threatening enough in his madness but, combined with the guy who actually managed to win last year makes it more than just the run-of-the-mill meta-threat. It also makes for some terrific punning, excused just this one time entirely because it’s the season and all that. Captain Cold isn’t even around for most of it, making a feeble attempt to help Barry out by filling him in on his cohort’s dastardly plans before running for the hills. This is obviously all in service of his role on Legends, which is dangerously close now to actually being on our tellys now.

Because this is a mid-season finale, much of the episode is dedicated to parental angst. Chiefly, Iris finally tells Barry about the existence of Wally West in what was actually a very sweet scene between the two, and they later decide it’s probably best to present a united front to Joe. I worried when we heard about another West sibling that the show would muddle the relationship between Barry and the family, but this episode did a lot to allay those fears. Joe gives Barry his own father’s watch even after he finds out about Wally, for instance, and it highlights the nice place that part of the show is in now that the Barry/Iris romance is done (or at least on pause). But Joe’s understandably upset to discover that he has a son he never knew about, and we’ll have to wait until January to find out how that particular family reunion goes. We’re fairly sure that he’s going to become some kind of speedster, entirely because of his name, but it’ll just be interesting on its own to see how he slots into the show’s existing dynamic. It’ll also presumably give Iris something to do at last.

My highlight of the episode, though, was the fleshing out of Patty’s character, giving her layers beyond the cute Felicity-esque girlfriend for Barry she’s been so far. We already knew that her father had been killed by a metahuman, but here we discovered that metahuman was in fact the Weather Wizard. It’s slightly frustrating when there are two adjacent relationships going on – that between Barry and Patty and between The Flash and Patty, because while we know what’s going on, Patty has no clue that she’s opened up quite that far with her boyfriend yet. Her lack of Flash knowledge hasn’t been actively annoying yet, but it’s getting there. I’d like her to become a bigger part of the show and, to do that, she needs all the facts. We’re left on a cliffhanger that’s simultaneously very similar yet very different from last season’s – Wells is going to help Zoom take down Barry in exchange for his daughter. He doesn’t want to do it because, unlike Thawne, he’s fundamentally a good person, but it’s still his love for his child that drives him. I’ve been so impressed by how The Flash has slotted Wells back into things, all coming to a head in that scene between Barry and an unwitting Harry. It’s the equivalent of his through-glass talks with Henry while he’s off fishing , but it was done so beautifully. Barry has been struggling with what happened last season all year, and maybe this is his way of finally moving on. 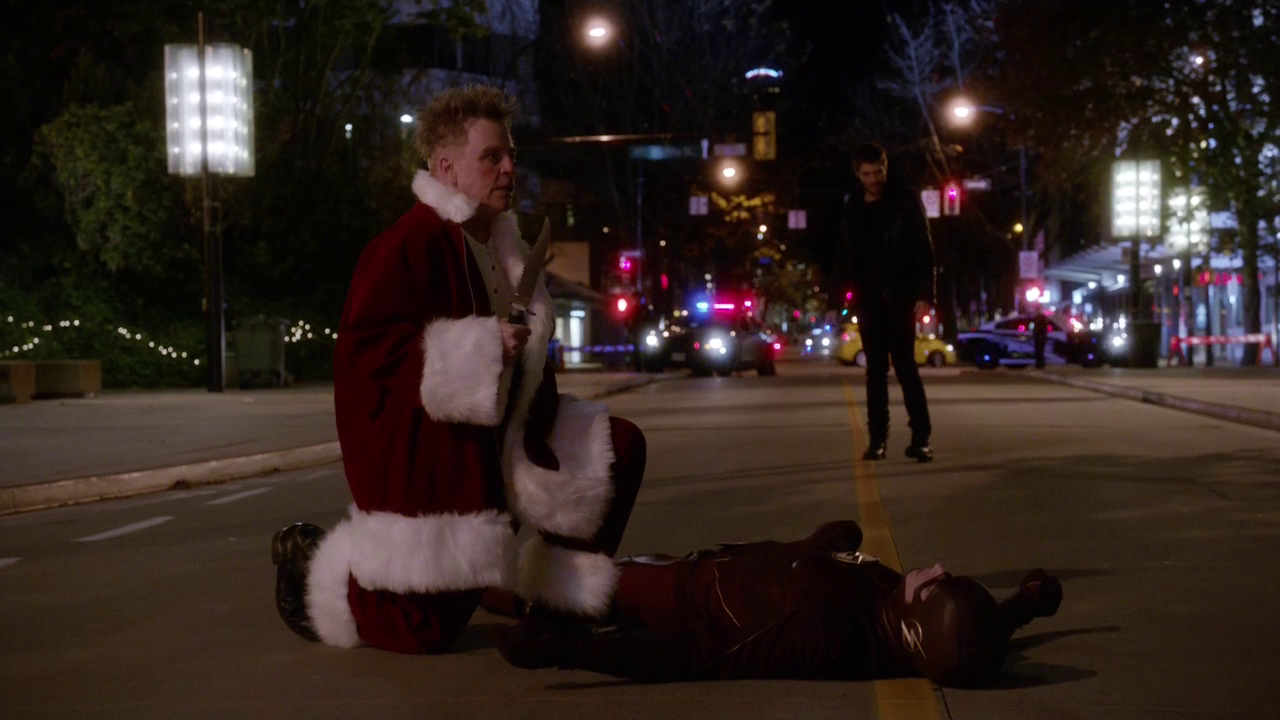 All in all, the first half of season two has proven that the show is more than capable of measuring up to its first, with a inordinate amount of intricate pieces in place for an even better string of episodes once we come back.