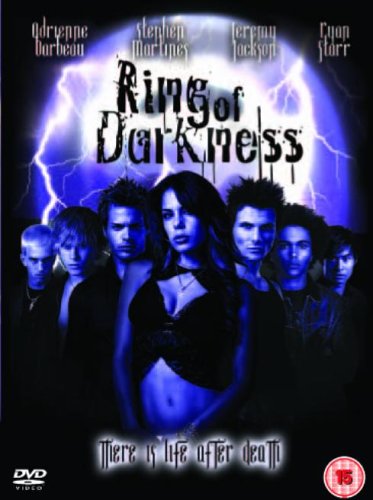 Ring of Darkness begins with a young man sneaking through a large home at night. He escapes through a window and we see him run down to a rocky beach. Four other young men confront him and we realize that he knows them. He’s the singer of their band. He threatens to expose them but they won’t allow it. They attack him instead. They seem to be biting him. Soon after, we learn that they’re “Take 10”, a boy band in the vein of *NSync and Backstreet Boys. They search for a new lead singer through an “American Idol” (2002)-styled audition process. When three candidates are chosen, they’re taken to the home we saw in the beginning of the film for the final leg of their audition. Just what was the band’s secret, and will the new candidates accept it? Near the beginning of the film, director David DeCoteau gives us a complete music video of our faux boy band. The music couldn’t be cheesier. To amp up the torture, we have to hear this same song over and over for at least the first half hour of the film. Later on the same footage is constantly intercut into other scenes, edited in a way that is supposed to suggest additional Take 10 videos. Padding is a big theme throughout the film. The music video isn’t the only footage reused. There are also chase scenes that go on for what seem to be hours, until there’s not one shred of suspense left. DeCoteau and editor Danny Draven, two Full Moon alumni, cut the chase scenes with changes in the film speed. The final result just looks ridiculous and feels like more padding.

The funniest aspect for me was the acting, and the worst offender was Ryan Starr (as Stacy), who comes to the film world by way of her stint as a contestant on “American Idol”. She says her lines far too quickly and she emotes as well as a brick wall. Why would DeCoteau just let such a shoddy performance pass? Maybe he didn’t, but he couldn’t get any improvement. That may be why Starr, whose picture is prominently in the center of the poster and video box art, is strangely absent for long periods of time. Not that most of the other actors are any better. Even a veteran like Adrienne Barbeau comes across poorly in the film.  For a film that’s ostensibly a horror flick, there is very little horror here. The attack scenes, as few and far between as they are, are all shown with wide shots. They are completely bloodless. For scenes in Take 10’s “secret lair”, victims are bound and slashed, except it’s the worst knife wound effect I’ve ever seen. It couldn’t be clearer that there is just some oddly colored fluid coming out of the knife, with absolutely no perforation of flesh.

It’s difficult to know exactly whom the film is supposed to appeal to. My guess is that young teenaged girls and gay men would like it the most, as DeCoteau, who is an openly gay director and is well known for his homoerotic genre films, fills Ring of Darkness with men in various states of undress, posing for the cameras. There are strong subtexts based on the inherent gayness of boy bands. The threatened exposure in the beginning can be seen as a threatened outing of sexual orientation. Take 10’s bonding rituals have strong homoerotic overtones, as does the bondage and fluid ingestion that takes place in their secret lair. But again for its unintentional properties, Ring of Darkness is extremely funny.  It’s a film not to be taken seriously and just sit back and put on to waste time and not to make you think.