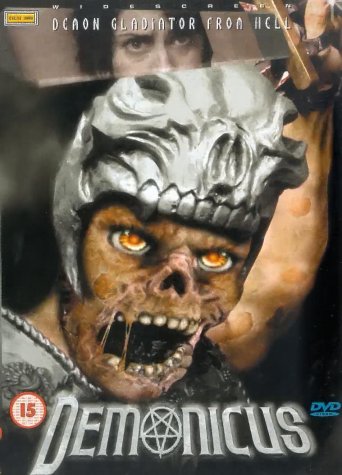 Demonicus is a very different movie. Believe it or not is like watching an interactive video game with out playing it. It has very low budget and actors I am sure that nobody is familiar with.

We began the the  film with a guy and a woman some where in Italy and there is a cave that actually looks like a rail road/train track tunnel and she says don’t go in there and what does he do? The normal stuff! He doesn’t listen to her! He goes in there and finds alot of gladiator artifacts and armor and a almost perfectly preserved body of a legendary gladiator named Tyrannous! Where did the chair come from that Tyrannous was sitting on and how did his body stay so good and where did the Cauldron Pot come from?.

Tyrannous is wearing his armor,helmet,and has a weapon or two. He does the dumbest thing a person could do,he puts on the helmet and is taken over by the spirit of Tyrannous! From there he walks around just killing all of the campers near by to bring back the real Tyrannous.

This movie has some errors but it isn’t a classic  but it is entertaining if you like really low budget error prone movies then you better see Demonicus!

A teenage sorcerer at an exclusive private school takes three social misfits under his wing, and encourages them to use black magic to strike back at the bullies who have made their lives a misery. However, they do not realise he is only using them to summon a powerful demon into the world.

If you want a film that is off the edge a bit, has no great depth of thought, but rather a simple storyline  then I think it is worth investigating!