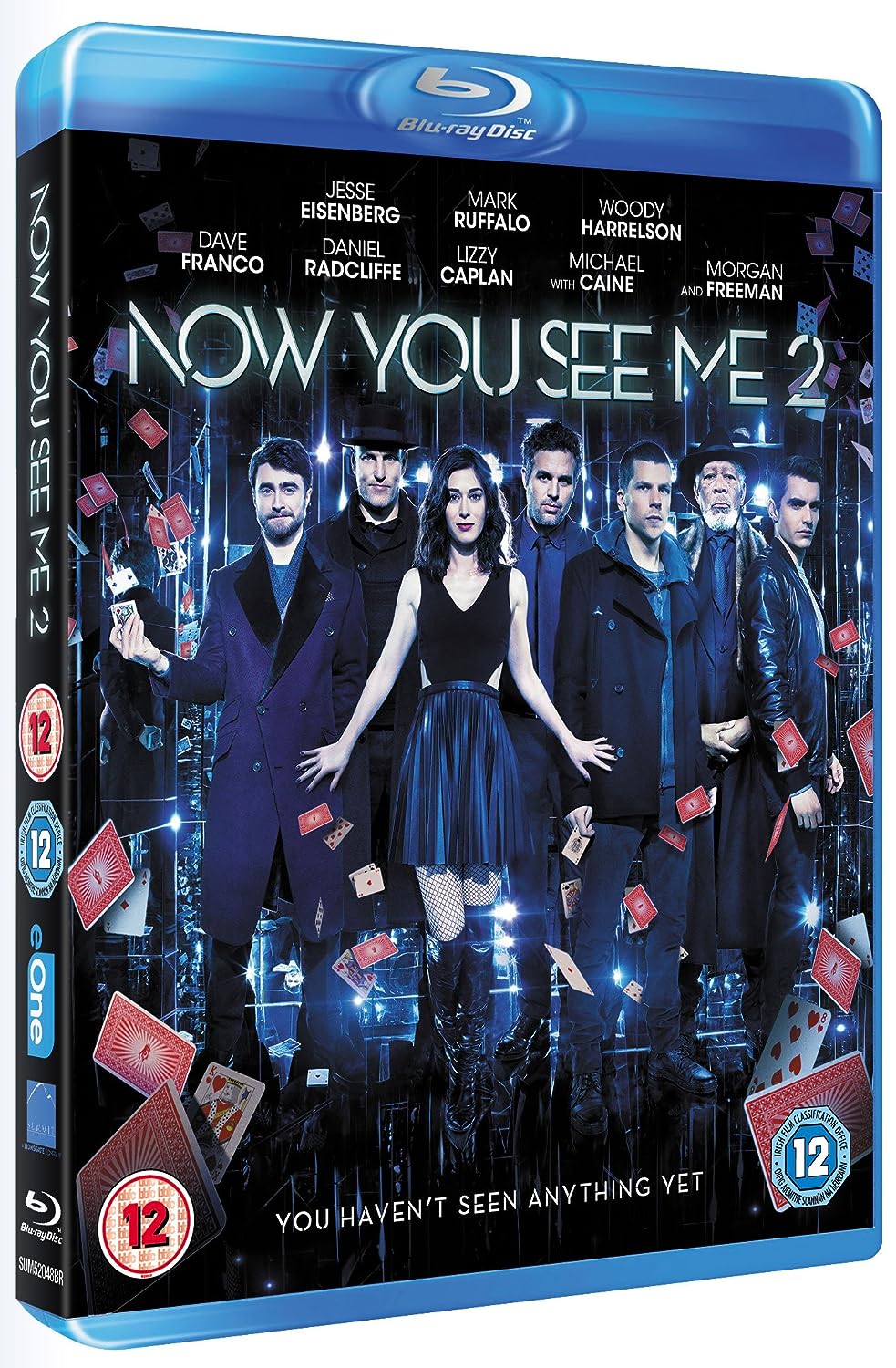 Eighteen months after outwitting the FBI, the members of the Four Horsemen – J. Daniel Atlas (Jesse Eisenberg), Merritt McKinney (Woody Harrelson) and Jack Wilder (Dave Franco) – are in hiding in New York City, awaiting further instructions from the Eye, the secret society of magicians they’ve been recruited into. Atlas, having grown tired of waiting for a mission, seeks out the Eye himself. His search leads him to a tunnel in which he hears a voice that tells him that his wait may be coming to an end. The Horsemen’s handler, FBI Special Agent Dylan Rhodes (Mark Ruffalo) ultimately assigns them a new mission, exposing corrupt businessman Owen Case (Ben Lamb) whose new software secretly steals data on its users for Case’s benefit. Lula May (Lizzy Caplan) is added to the team to replace former member Henley Reeves (Isla Fisher), who has left the Horsemen after breaking up with Atlas.The Horsemen hijack the launch party for the new software, but the show is interrupted by a mysterious individual who reveals to the world that Wilder, believed to be dead, is actually alive, and that Rhodes is their mole, forcing him to escape. While escaping, the Horsemen enter their escape tube on a roof and emerge in Macau, where they are captured by mercenaries and Chase McKinney (also played by Woody Harrelson) Merritt’s twin brother. The Horsemen are then brought before Chase’s employer, technology prodigy Walter Mabry (Daniel Radcliffe) Case’s former business partner, who faked his own death after Case stole Walter’s company. Mabry conscripts the Horsemen into stealing the data-mining device developed by Case to prevent him from using it. The chip allows the user to decrypt and access any electronic device around the world. The Horsemen agree to steal the device.They get supplies at a famous magic shop in Macau, run by Li (Jay Chou) and Bu Bu (Tsai Chin) and secretly contact the Eye to arrange to hand over the device after they steal it. Meanwhile, Rhodes a branded fugitive is forced to spring his rival Thaddeus Bradley (Morgan Freeman), whom Rhodes blames for the death of his father, out of jail for help.The Horsemen infiltrate the facility and steal the chip, despite being interrogated and searched by security guard Allen Scott-Frank (Henry Lloyd-Hughes). Atlas is then confronted by Mabry, revealing that Atlas had been fooled into thinking that Mabry was the Eye. Rhodes intervenes and pretends to retrieve the device, but is captured by Mabry’s henchmen and taken to a nearby yacht. There, he learns Mabry is acting on behalf of his father, Arthur Tressler (Michael Caine), whom Rhodes exposed with the help of the Horsemen in the first film. Tressler places Rhodes in a replica of the same safe that his father died in and leaves him to drown, but Rhodes escapes and is rescued by the Horsemen. They find that the chip they had stolen appears to be a fake.Rhodes and the Horsemen broadcast that they will be performing live in London at midnight on New Year’s Eve. Mabry and Tressler, thinking that they have the computer chip, make haste to London, where the Horsemen are performing a series of tricks on the streets. At the Shard, Mabry, Tressler and Chase discover that Rhodes is still alive and capture the five, taking them on his private plane. Mabry takes the card from them, and Rhodes and the other Horsemen are thrown out of the plane supposedly in flight. However, Tressler discovers that the plane has never taken off, and instead is on a barge (with special effects that made it look like the plane was in the air) in the middle of the River Thames, with their criminal activities being broadcast live to the world by the Horsemen in the process. Mabry, Tressler and Chase are arrested and Rhodes, now going by his real surname, “Shrike”, entrusts the information they’ve gathered on the real criminals’ activities to the FBI, who allows him a head start to escape.Rhodes and the Horsemen are then taken to meet the leaders of the Eye in a secret library in Greenwich Observatory. They find that the members of the Eye include Li, Bu Bu, Allen Scott-Frank and Thaddeus Bradley. Bradley reveals that he was actually Lionel Shrike’s partner, and he had been masquerading as his rival as part of their planned act; he had exposed Lionel’s first act planning to be dumbfounded by his second act, only to abandon the Eye after Lionel’s death. Before Bradley leaves, he asks Rhodes to be his successor in the Eye’s leadership and requests that the Horsemen enter a curtain. The Horsemen, along with Rhodes, go behind the curtain, and find a door behind it. They enter the room and find a spiral staircase; as they walk, the camera zooms out to the stairs, forming an Eye.If you’re looking for something to pass the time, or for movie night, I suggest this. Like I said, it’s just a fun, simple movie. 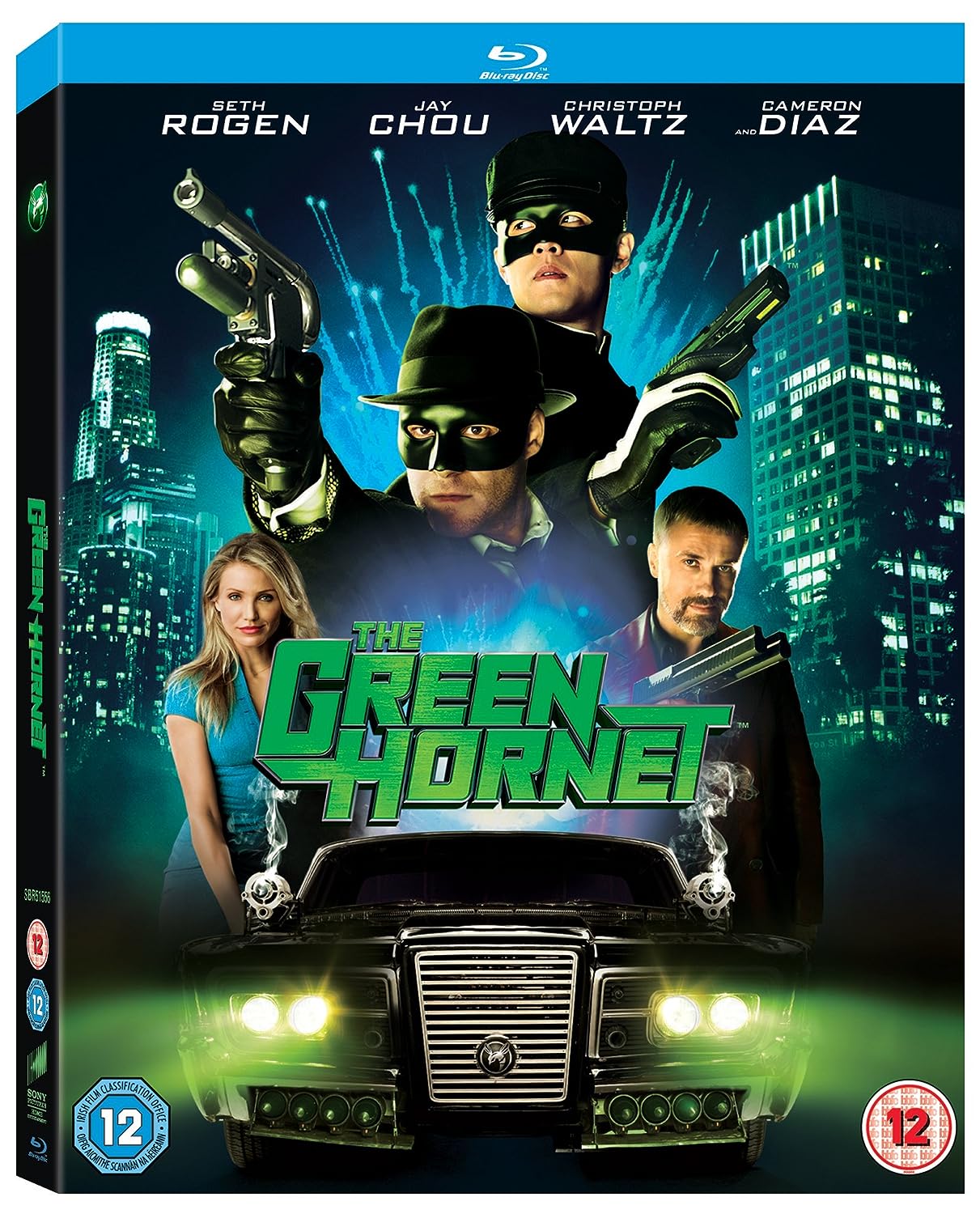 Britt Reid (Seth Rogen) is the irresponsible, 28-year-old slacker son of widower James Reid (Tom Wilkinson), publisher of the Daily Sentinel, a successful Los Angeles newspaper. Britt’s attitude changes when James is found dead from an allergic reaction to a bee sting. After the funeral, Britt fires the staff aside from his maid, but later re-hires Kato (Jay Chou), James’s mechanic and a highly skilled martial artist. Britt and Kato get drunk together and, upon agreeing that they both hated James, visit the graveyard to cut the head off James’s memorial statue. After they succeed, they rescue a nearby couple being mugged. When police mistake Britt and Kato themselves for criminals, Kato evades them in a car chase as he and Britt return to the mansion.

Britt convinces Kato they should become crime-fighters who pose as criminals in order to infiltrate real criminals, and to prevent enemies from using innocents against them. Kato then develops a special car outfitted with several gadgets and weapons, which they call the Black Beauty. Britt plans to capture Benjamin Chudnofsky (Christoph Waltz), a Russian mobster uniting the criminal families of Los Angeles under his command, and whom his father was trying to expose. To get Chudnofsky’s attention, Britt uses Daily Sentinel as a vehicle to publish articles about the “high-profile criminal” the Green Hornet. Britt hires Lenore Case (Cameron Diaz), who has a degree in journalism and a minor in criminology, as his assistant and researcher, and uses her unwitting advice to raise the Green Hornet’s profile. Britt and Kato blow up several of Chudnofsky’s meth labs, leaving calling cards so Chudnofsky can contact them. Throughout all this, the Daily Sentinel’s managing editor Mike Axford (Edward James Olmos) fears this single-minded coverage will endanger Britt’s life, and District Attorney Frank Scanlon (David Harbour) frets over public perception that he cannot stop the Green Hornet.

Britt asks Lenore out, but she rebuffs him and instead invites Kato to dinner, making Britt jealous. Kato learns from her that mobsters often offer a peace summit to rivals in order to get close enough to kill them; Britt then tells Kato that Chudnofsky has offered them such a meeting. Kato tries dissuading him, but Britt, feeling overshadowed, follows his instincts. This nearly proves fatal when Chudnofsky tries to kill them. Barely escaping to the mansion, Britt and Kato argue and fight, and Britt fires both Kato and Lenore, who he believes are in a relationship. Kato receives an email from Chudnofsky on the Hornet’s calling-card email address, offering $1 million and half of Los Angeles to the “Hornet” if he kills Britt or keeps him alive, and he is deciding to dub himself “Bloodnosfky”. Meanwhile, Britt discovers Scanlon is corrupt, learning that he tried to bribe James into downplaying the city’s level of crime in order to help his career.

Scanlon invites Britt to meet in a restaurant, where he reveals he murdered Britt’s father with a drug injection similar to an alergic reaction of a bee sting. Kato arrives, and instead of killing Britt attacks Chudnofsky’s men and Scanlon, allowing him and Britt, who Chudnofsky deduces is the real Green Hornet, to escape. At the Daily Sentinel, Britt intends to upload a recording of Scanlon’s confession onto the Web—and belatedly discovers he did not manage to record it. Chudnofsky and his men, who followed the duo there, engage them in a fierce firefight. Kato ultimately stabs Chudnofsky in the eyes with wood in self-defense and Britt shoots him to death with Chudnofsky’s gun. A SWAT team appears and fires at the Green Hornet and Kato, who use the remains of their nearly demolished Black Beauty to run Scanlon out the 10th-floor window, killing him. The Green Hornet and Kato flee to Lenore’s house, where she learns their secret identities and that she has been the accidental mastermind behind the Green Hornet’s plots. Despite being furious, she helps them hide from the police and tends to Britt’s shoulder gunshot wound.

The next morning, Britt promotes Axford to editor-in-chief and stages being shot in the shoulder by Kato, further establishing the Green Hornet as a threat and allowing Britt to get treated by professionals in a hospital. Later, the two weld James’ stolen head back onto his memorial statue. Now with Lenore to aid them, Britt and Kato vow to continue protecting the law by breaking it.

It’s by no means an outstanding film, but I thought there was some very funny bits in it!! There’s also a decent amount of action and great special effects! It’s typical harmless hollywood fun… and great entertainment for a saturday afternoon!