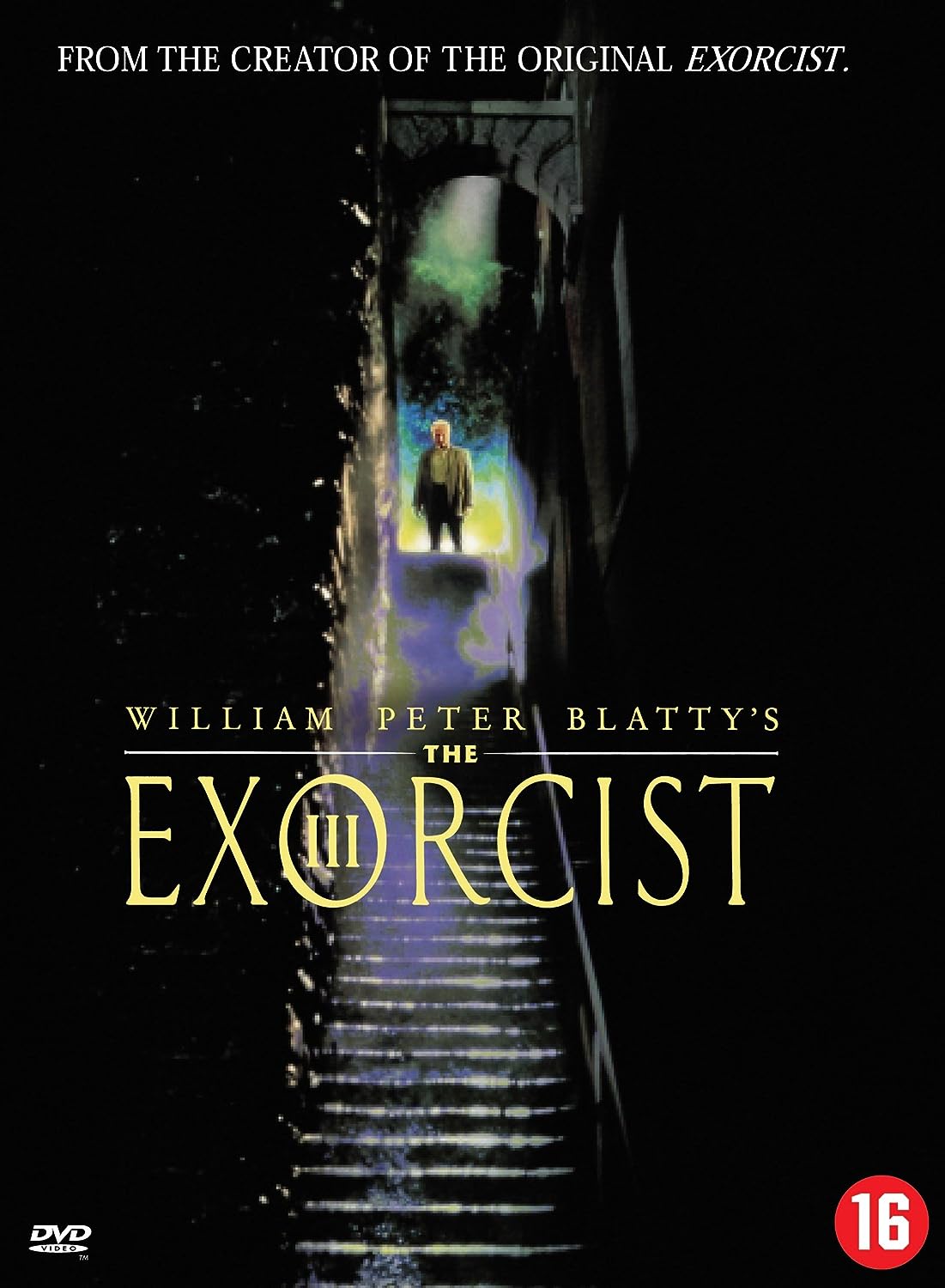 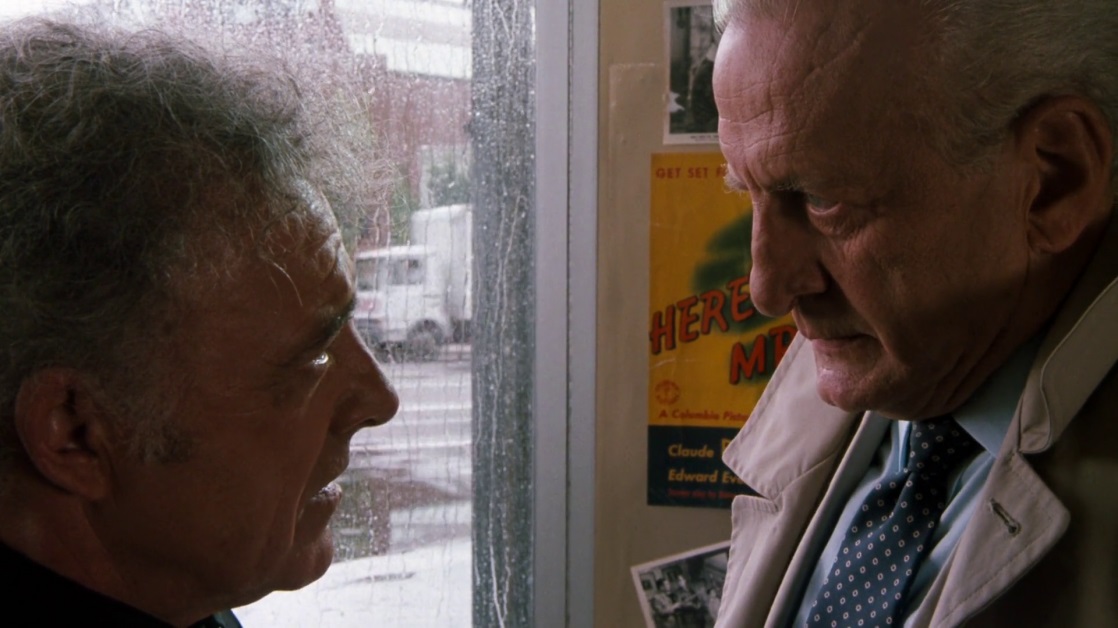 The film begins with the point of view of someone wandering through the streets of Georgetown, a voice informing us “I have dreams… of a rose… and of falling down a long flight of stairs.” The point of view shows a warning of evil about to arrive later that night at a church. Demonic growls are heard. Leaves and other street trash suddenly come flying into the church as a crucifix comes to life. It then cuts to Lieutenant William F. Kinderman (George C. Scott) at a crime scene, where a 12-year-old boy named Thomas Kintry has been murdered. 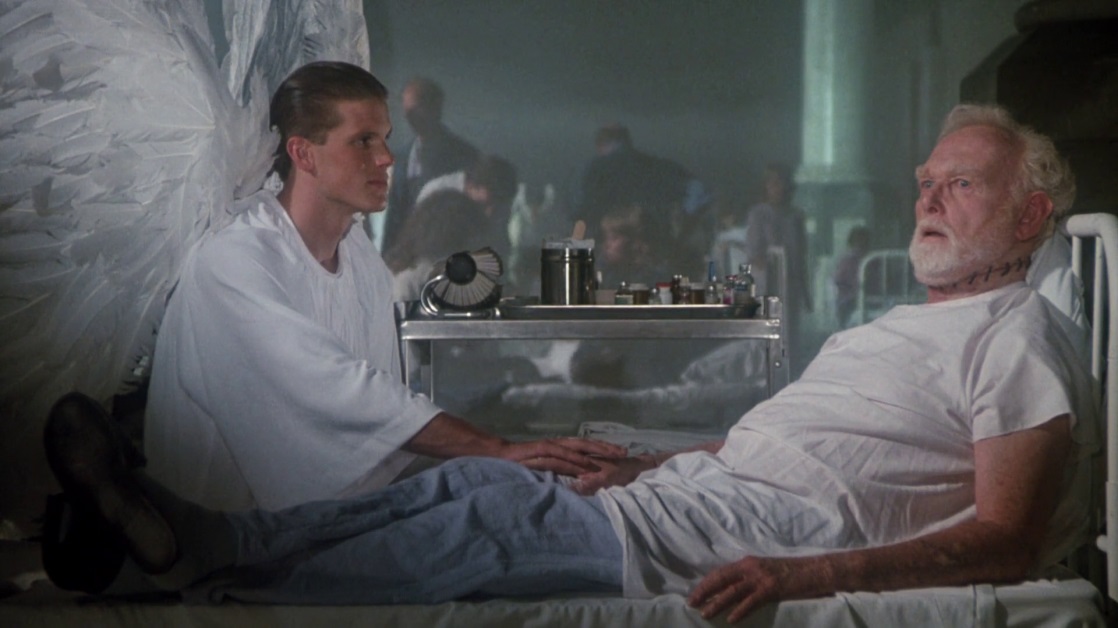 Kinderman takes his friend, a priest named Father Dyer (Ed Flanders), out to see their mutually favorite film It’s a Wonderful Life. Kinderman later relates the gruesome details of the murder of the young boy he was investigating that morning, including his crucifixion. Another murder soon takes place — a priest is found decapitated in a church. Dyer is shortly hospitalized–and found murdered the next day–with the words “IT’S A WONDERFULL LIFE” written on a wall in Dyer’s blood. 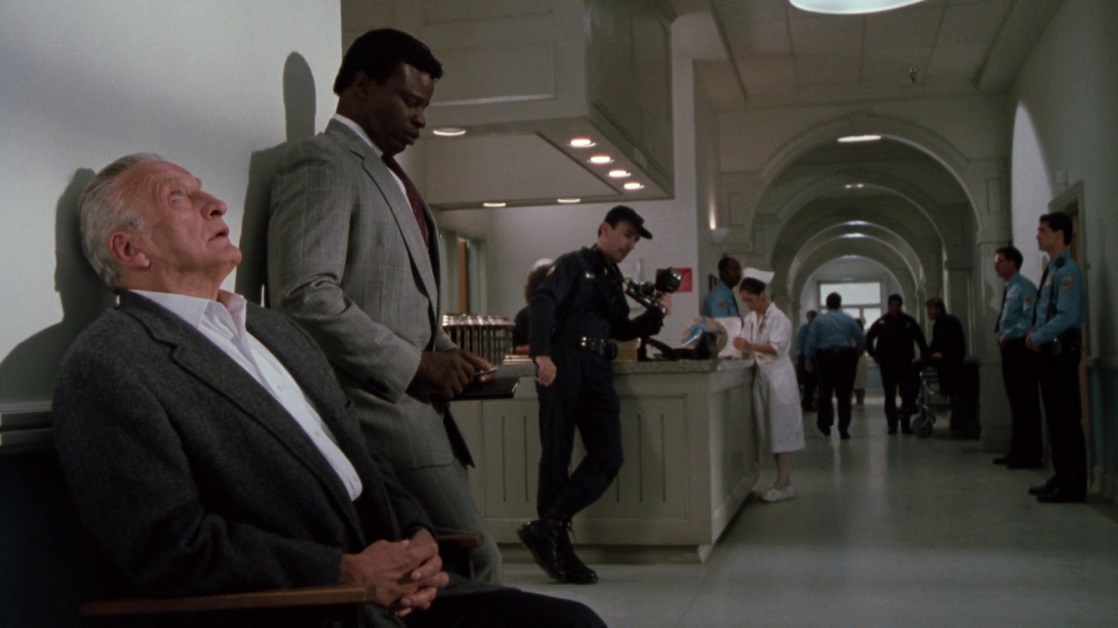 The fingerprints at the crime scenes do not match, indicating a different person was responsible for each. Kinderman tells hospital staff the reason for his unease: fifteen years ago the vicious serial killer James “The Gemini” Venamun (Brad Dourif), was executed; with every victim he cut off the right index finger and carved the Zodiac sign of Gemini into the palm of their left hand. Kinderman noticed the hands of the three new victims and verified that the Gemini’s sign has been there. The Gemini Killer also always used an extra “L” in his notes sent to the media, such as “usefull” or “carefull”. Furthermore, to filter out false confessions, the original Gemini Killer’s true mutilations were kept a secret by the Richmond police’s homicide department; the newspapers were made to wrongfully report that the left middle finger was severed and that the Gemini sign was carved on the back of the victim. 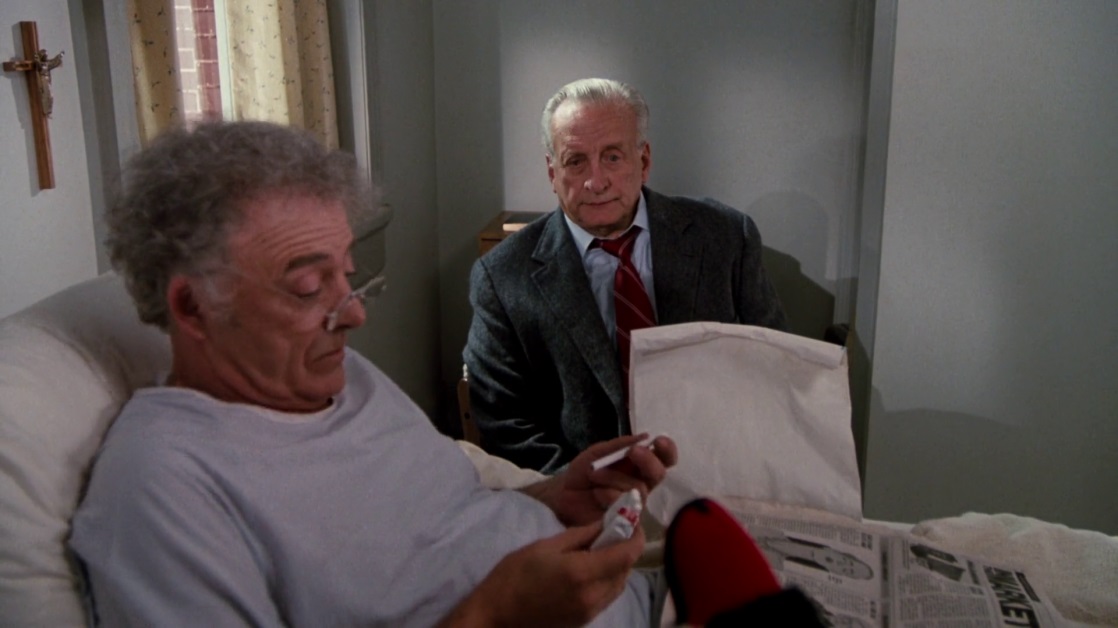 Kinderman visits the head of the psychiatric ward, Dr. Temple (Scott Wilson), who relates the history of a man in Cell 11, that he was found wandering aimlessly fifteen years ago with amnesia. The man was locked up, catatonic until recently when he became violent and claimed to be the Gemini Killer. Kinderman sees that the patient resembles his dead friend Father Damien Karras (Jason Miller). The patient expresses ignorance of Father Karras, but boasts of killing Father Dyer. 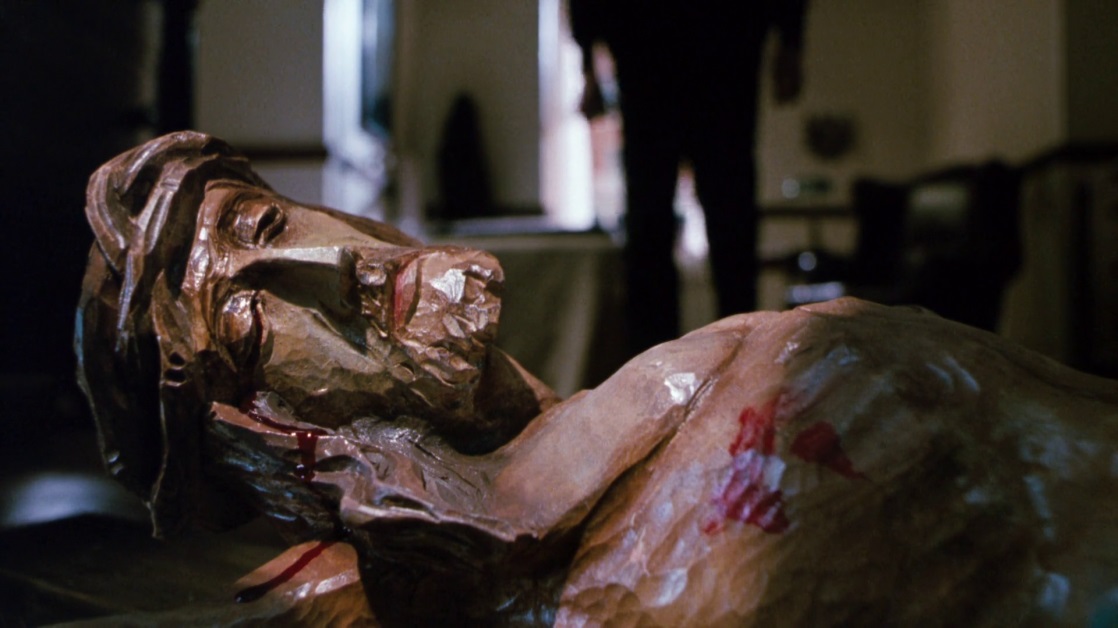 The next morning, a nurse and Dr. Temple are found dead. Kinderman returns to see the patient in Cell 11, who claims that after his execution his soul entered Karras’s dying body. The Gemini’s spiritual “master”, who had possessed the girl Regan MacNeil, was furious at being pushed out of the child’s body and is exacting its revenge by putting the soul of the Gemini Killer into the body of Father Karras. Each evening, the soul of the Gemini leaves the body of Karras and possesses the elderly people with senile dementia elsewhere in the hospital and uses them to commit the murders. The Gemini Killer forced Dr. Temple to bring Kinderman to him or he would suffer in unspeakable ways — Temple couldn’t take the pressure, and he committed suicide. 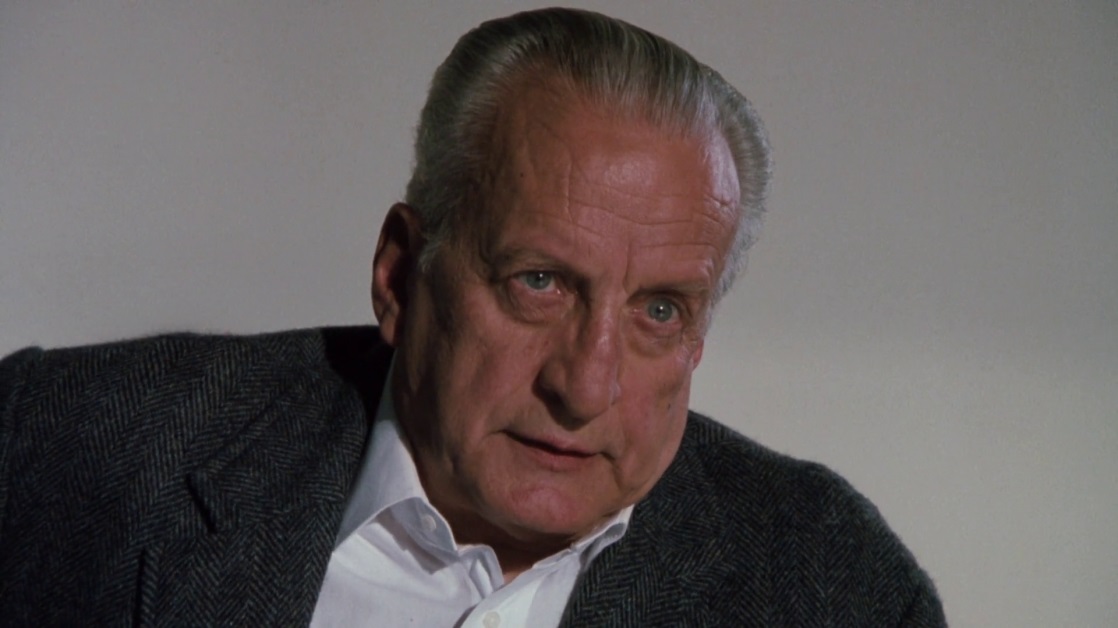 The Gemini possesses an old woman, who makes a failed attempt to murder Kinderman’s daughter. The possessed patient attacks Kinderman, but the attack abruptly ends when a priest, Father Paul Morning (Nicol Williamson), enters the corridor leading to cell 11 and attempts an exorcism on the patient. The Gemini’s “patron” intervenes, taking over the patient’s body, and the priest is all but slain. Kinderman arrives in time and attempts to euthanise Karras after finding the body of the priest but is hurled into the wall by the possessed Karras. Father Morning manages to briefly regain consciousness and tells Karras, “Damien, fight him.” Karras regains his free will briefly and cries to Kinderman, “Bill, now! Shoot now! Kill me now!” Kinderman fires his revolver several times, hitting Karras in the chest, fatally wounding him. The Gemini is now gone…and Karras is finally free. With weak breaths, he says “We won, Bill. Now free me.” Kinderman puts his revolver against Karras’ head — and fires. The film ends with Kinderman standing over Karras’ grave. 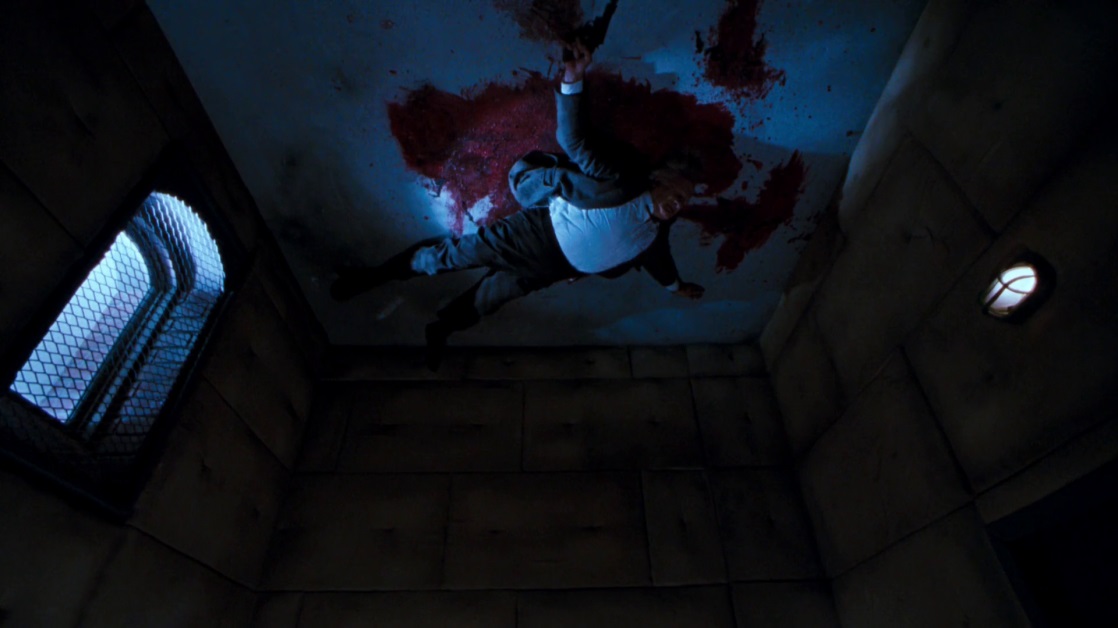 Despite the ghastly ending, “The Exorcist III: Legion” is a vastly underrated little horror movie — beautifully directed and acted, with a darkly theological undercurrent. Too bad Blatty hasn’t directed much else. 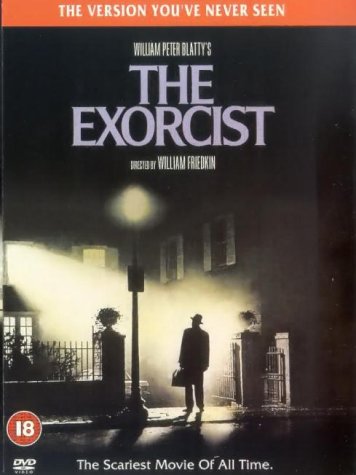 Released in 1973 to unsuspecting audiences worldwide, William Friedkin’s The Exorcist has shocked, appalled, outraged, reassured and just plain terrified millions of people during the last 40 years. Based on William Peter Blatty’s novel of the same name (which was, in turn, inspired by a documented 1949 event), this jarring film professes the existence of demonic possession under seemingly random circumstances: any one of us could fall victim, even an innocent young girl. The victim is Regan MacNeil (Linda Blair), who gradually shifts from a precocious pre-teen to a vomiting, hate-spewing representation of Satan himself. Her atheist mother Chris (Ellen Burstyn) tries almost everything to save Regan—pills, medical procedures, psychiatry—before turning to religion, represented by Father Damien Karras (Jason Miller), a struggling Catholic priest who reluctantly takes the unusual case. Soon enough, he calls in the elderly Father Lankester Merrin (Max von Sydow), and both men take part in an exorcism to wholly remove the evil spirit from Regan’s body.The Catholic Church infamously endorsed The Exorcist—even promoted it, to a certain extent—and why not? The movie makes Fathers Merrin and Kerris look like superheroes during the climactic exorcism, battling Satan for the soul of a helpless 12 year-old girl while staring death square in the eyes. All of this transpires after numerous medical procedures are attempted and doctors half-heartedly prescribe drugs to sedate the troubled young girl. “Science can’t save us and religion comes to the rescue”…so if that falls in line with your belief system, you’re more likely to be affected by what transpires here. Still, The Exorcist relies too heavily on gross-out gags, jump scares and its central “child in distress” to feel like anything more than an extended version of shock treatment. Well-made shock treatment, sure. Either way, The Exorcist carved itself a devout following during the last 40 years and even spawned sequels. It also warranted the release of a director’s cut in 2000, infamously advertised as “The Version You’ve Never Seen”.Having no long-standing ties to the theatrical cut (after all, I first saw The Exorcist just a few short years before the director’s cut had come about), I don’t emphatically prefer one over the other. The addition of a few scenes—medical procedures, the infamous “spider walk”, a short scene of Father Karras listening to tapes of a younger Regan, and a conversation between Karras and Merrin during the exorcism—are either modest improvements or, at the very least, short enough to not overstay their welcome. Yet other additions (including a few subliminally-flashed demon faces and a longer ending) detract from the overall experience. Overall, it’s a toss-up in my opinion, so the viewer is left to decide whether the Director’s Cut is worth another ten minutes. What matters most is that both versions are available here.