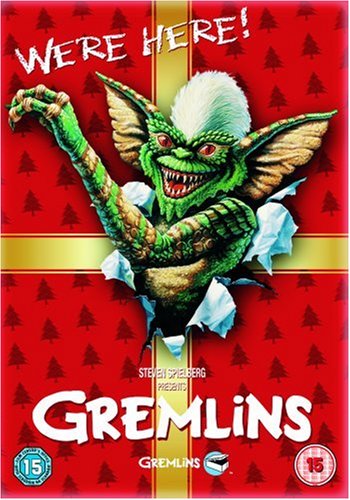 Randall Peltzer, a struggling inventor, visits a Chinatown antique store in the hope to find a Christmas present for his son Billy. In the store, Randall encounters a small, furry creature called a mogwai (Cantonese: 魔怪, “monster”). The owner Mr. Wing refuses to sell the creature to Randall, though his grandson secretly sells the mogwai to Randall but tells him to remember three important rules that must never be broken – do not expose the mogwai to bright lights or sunlight which will kill it, do not let it get wet, and never feed it after midnight.

Randall returns home to Kingston Falls where he gives the mogwai to Billy as a pet. Billy works in the local bank, and fears his dog Barney will be put down by Mrs. Deagle. Randall names the mogwai “Gizmo” and Billy makes sure to treat him well. But when Billy’s friend Pete spills a glass of water over Gizmo, five more mogwai spawn from his back, a more troublemaking sort led by the aggressive Stripe. Billy shows one of the mogwai to his former science teacher Mr. Hanson, spawning another mogwai, who Hanson experiments on. Stripe’s gang trick Billy into feeding them after midnight by chewing out the power cord to his bedside clock and transform into cocoons, as does Hanson’s mogwai. Shortly after, their cocoons hatch and they emerge as mischievous, reptilian Gremlins that torture Gizmo and try to murder Billy’s mother, while Hanson is killed by his Gremlin.

All of the Gremlins are killed except Stripe, who escapes to a local YMCA and jumps into a swimming pool, spawning an army of Gremlins who wreak massive chaos around Kingston Falls. Billy tries to warn the police but they don’t believe him. Many people are injured or outright killed by the Gremlins’ rampage, including Mrs. Deagle, who is launched out of her house on a stair lift that has been sabotaged by the gremlins. At the local bar, the Gremlins have fun until the barmaid Kate Beringer, Billy’s girlfriend, flashes them with a camera and escapes into the bank with Billy and Gizmo. While hiding, she reveals her father died in a chimney while dressed as Santa Claus. Billy and Kate discover the town has fallen silent and the Gremlins are watching Snow White and the Seven Dwarfs in a theater. They set off an explosion, killing all the Gremlins except Stripe.

Billy chases Stripe into a Montgomery Ward store, where Stripe climbs into a water fountain and tries to spawn more Gremlins. Gizmo arrives in a toy car and opens a skylight, exposing Stripe to extreme sunlight and melting him. In the aftermath of the Gremlins’ rampage, Mr. Wing arrives to collect Gizmo, scolding the Peltzers for their carelessness, thinking the Western world is not ready but comments that Billy might some day be ready to care for Gizmo properly. Gizmo likewise believes so, having become attached to Billy. Mr. Wing departs with Gizmo in tow, while Randall narrates to the audience to check their house if things go wrong, because “there just might be a Gremlin in your house”.Originally a much more evil script (intended to be an anti-Wonderful Life), Chris Columbus was inspired to write Gremlins as he listened to the rats in his apartment scurry about in the dark during the night. He lightened the material somewhat before filming began, but Joe Dante’s wild vision makes it a twisted, festive reality. Gremlins sparked the rise of Chris Columbus as a creative force in Hollywood. Only 25 at the time of filming his career has been made up of classics, and Christmas classics, such as The Goonies, Young Sherlock Holmes, Home Alone, Home Alone 2, Harry Potter, and Bicentennial Man. Joe Dante never scored a bigger hit, but his subsequent career significant;y defined 80s and 90s cinema with movies such as Innerspace, The ‘burbs, Gremlins 2, and Small Soldiers. Goldsmith scoring every one of them until his death in 2004.