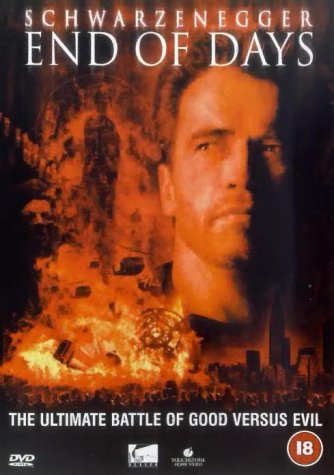 In 1979 a priest at the Vatican sees a comet arching over the moon (described as the “Eye of God”), heralding the birth of one chosen to be the mother of Satan’s child. The priest is sent on a mission by the Pope to find and protect the girl from Satan, although a few Vatican Knights (led by a corrupt cardinal) insist that she must die. In New York a newborn girl, Christine York, is identified by Satanists (including her physician, Dr. Abel, and her nurse and future guardian, Mabel) as the woman chosen to bear Satan’s child on New Year’s Eve, 1999. The Satanists perform occult rites on the newborn.In late 1999, Satan possesses an investment banker in a restaurant; he then destroys the restaurant, killing many inside. Suicidal and alcoholic former police detective Jericho Cane, depressed since his wife and daughter were killed in contract killings, works for a private security company and blames God for his plight. Jericho and co-worker Bobby Chicago are assigned to protect the possessed banker. A priest, Thomas Aquinas, unsuccessfully tries to kill the banker. Jericho captures Aquinas, who warns Jericho: “The thousand years has ended, the dark angel is loosed from his prison” and says that a girl is central. Jericho shoots Aquinas, who is arrested by the New York Police Department. Marge Francis, an NYPD detective and Jericho’s former colleague, tells him that Aquinas has no tongue. 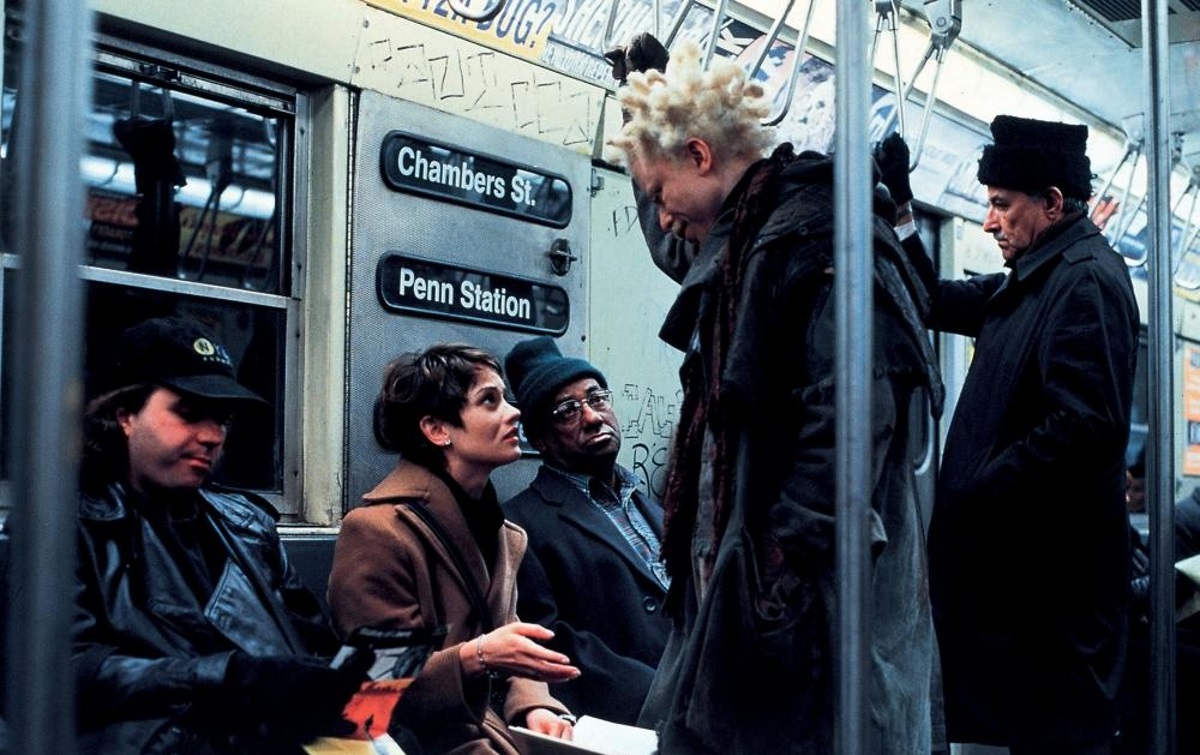 Jericho and Bobby investigate on their own, learning that Aquinas was trained at the Vatican and was sent to New York before disappearing. Jericho questions Father Kovak, a priest who knew Aquinas. Kovak asks Jericho if he believes in God; when he says no, the priest tells him that Aquinas was driven mad by forces an atheist could not understand. They go to Aquinas’ apartment, where they find his tongue in a jar and messages and symbols written in blood on the walls. Marge arrives, forcing them to leave. Satan infiltrates Aquinas’ hospital, and crucifies him on the ceiling. Although he survives, he is shot by a Satanic police officer. Jericho and Chicago see Latin words and “Christ in New York” scratched into Aquinas’ skin, and begins searching for Christine York. 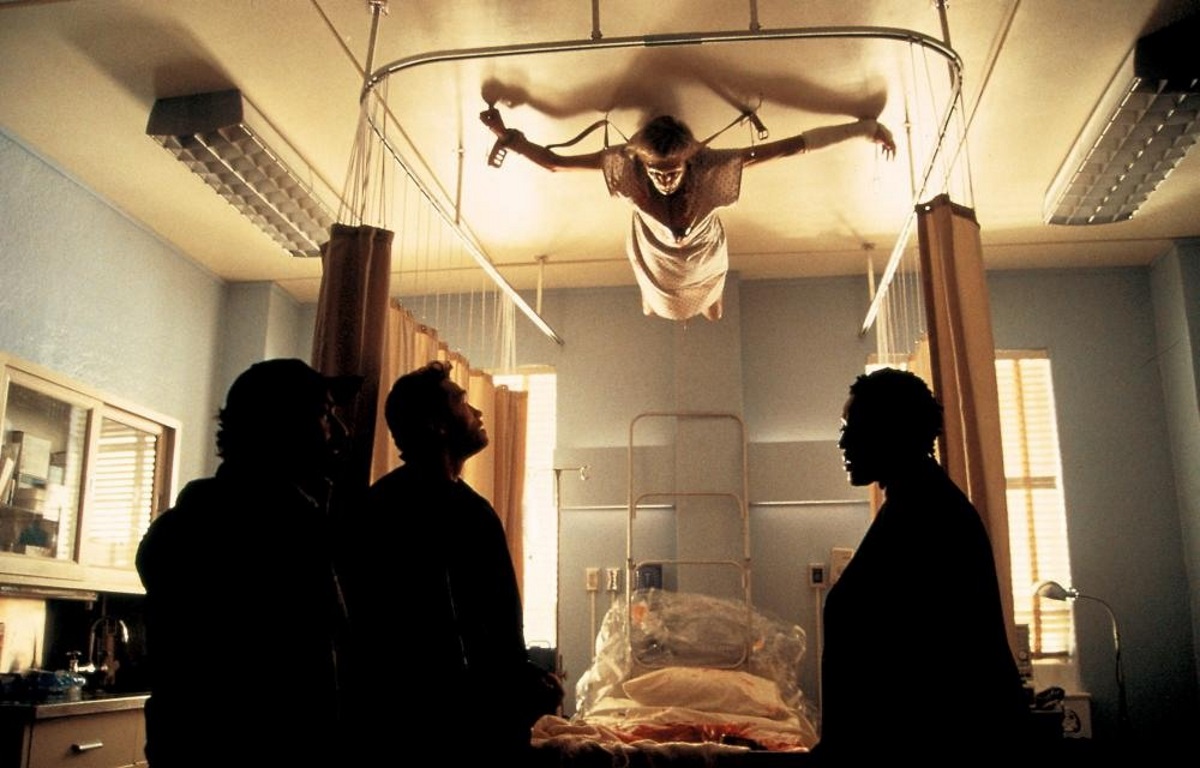 Jericho and Chicago find Christine in her apartment, saving her from the Vatican Knights, and she brings them to Mabel’s house. After Satan destroys Chicago’s van, killing him, Jericho attempts to leave with Christine. Mabel attacks Jericho, refusing to let him have Christine. Satan enters the house and kills Mabel for failing him; Jericho and Christine escape. Marge and another officer, both Satanists, tell Jericho to surrender Christine. Jericho kills them, but Satan resurrects Marge. Father Kovak tells Jericho and Christine that Satan must impregnate her moments before midnight on New Year’s Eve to usher in the “end of days”. Christine accepts Kovak’s protection. 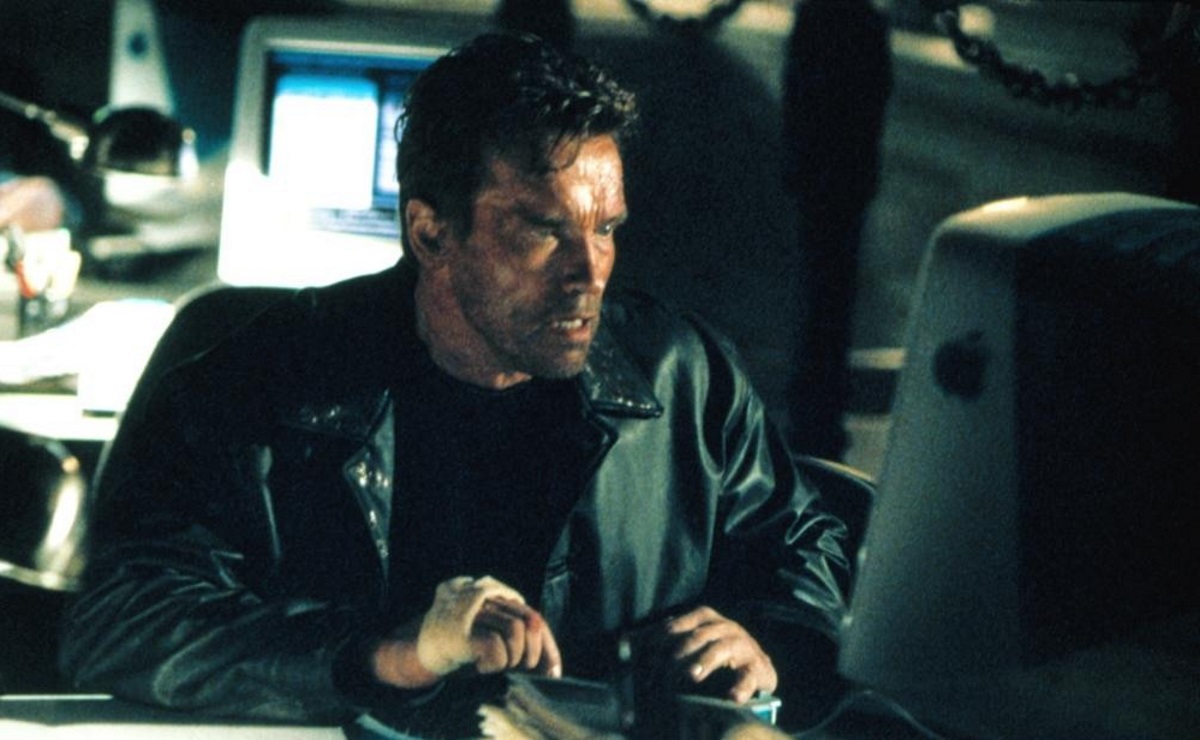 Satan infiltrates Jericho’s apartment, showing him a vision of his family’s murder, offering to bring them back in return for Christine. Enraged, Jericho throws Satan through his apartment window after a fight, and Chicago appears. At the church, the Vatican Knights try to kill Christine before Satan kills them. Chicago tells Jericho that he is in league with Satan after he brought him back. Kovak rescues Jericho, and Satan kidnaps Christine. After locating Satan’s underground temple, Jericho rescues Christine and again kills Marge. Chicago stops Jericho, who persuades him to fight off Satan’s influence; Satan burns him alive. Jericho escapes with Christine into a subway tunnel. They battle to survive against Satan together; Jericho fires a grenade at their pursuer, who leaves the banker to die for a new host. 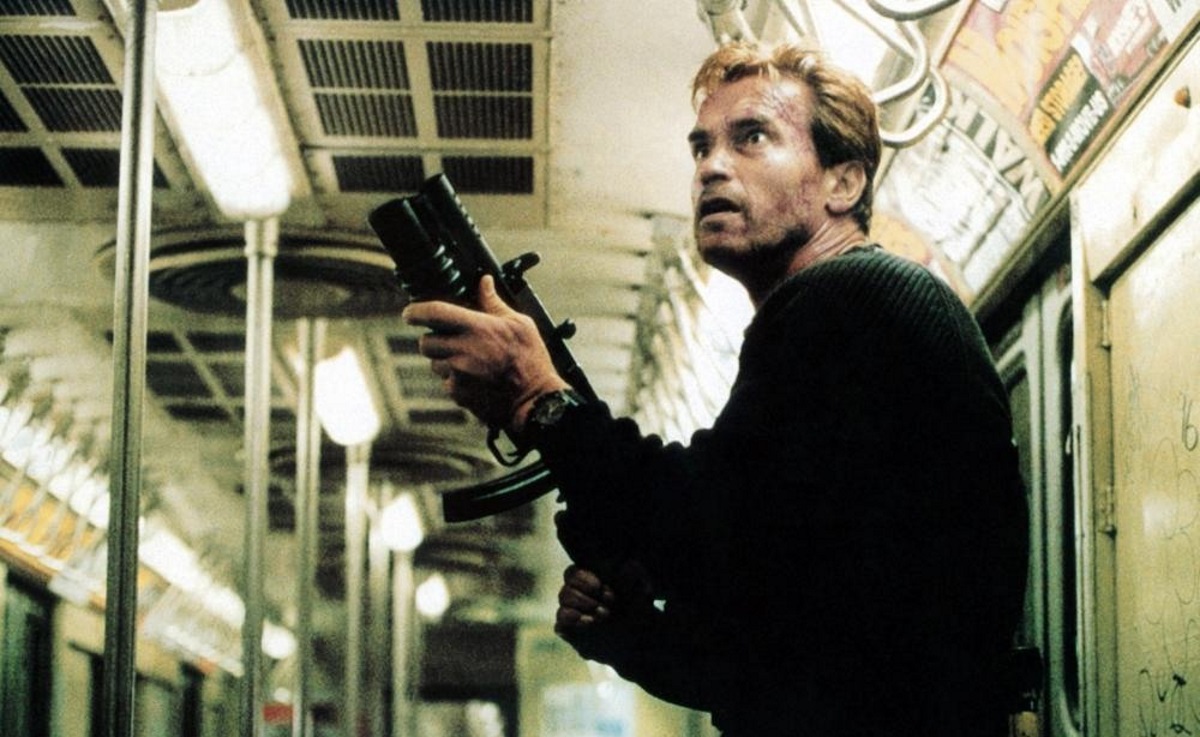 Jericho and Christine escape to another church, where Jericho renews his faith in God and prays for strength. Satan confronts Jericho as a massive, winged creature and possesses him. Jericho attempts to rape Christine, who tries to escape before Jericho deliberately impales himself on a sword protruding from a statue. At the stroke of midnight God frees Jericho’s dying body, sends Satan back to hell and the world celebrates the new millennium. Jericho and Christine see the former’s family waiting for him in the afterlife. He dies in peace, and Christine waits with his body for the authorities. 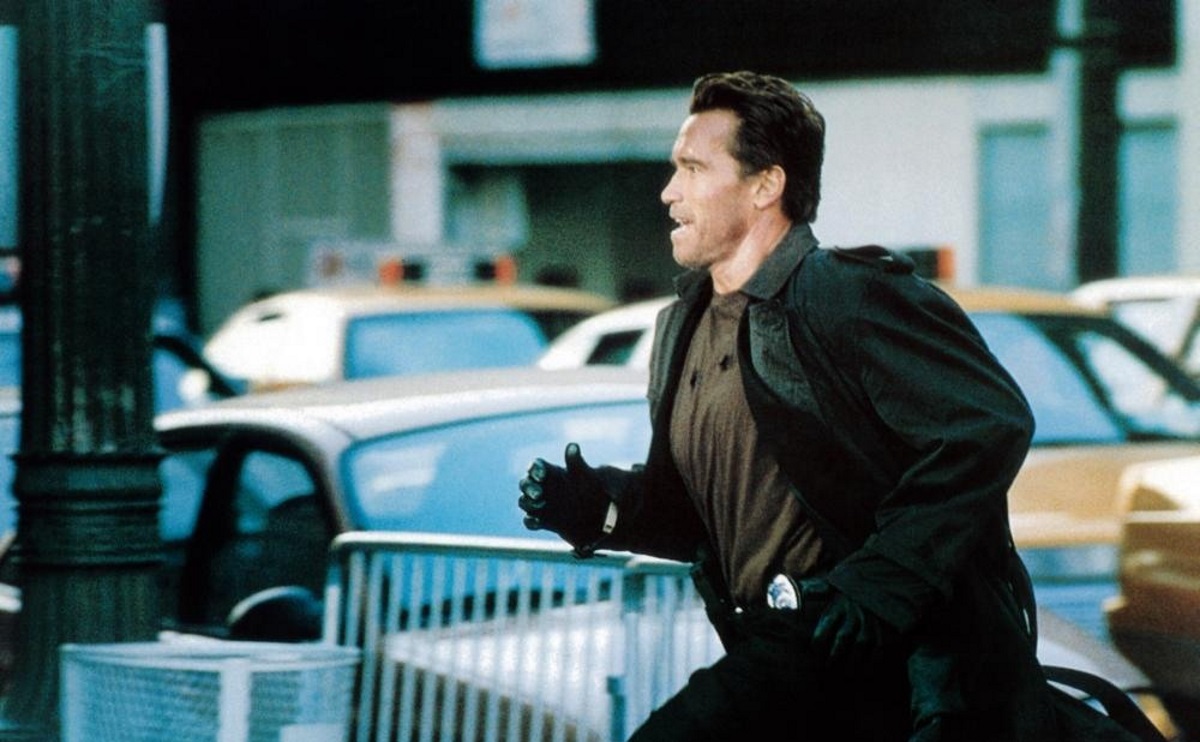 All in all, an enjoyable romp for fans of the Arnie before his attention was diverted by a political career. It compares well to his classic eighties work by trying to do something different and while it may not gel properly in places, for a good 80% of the running time it does a very entertaining job. 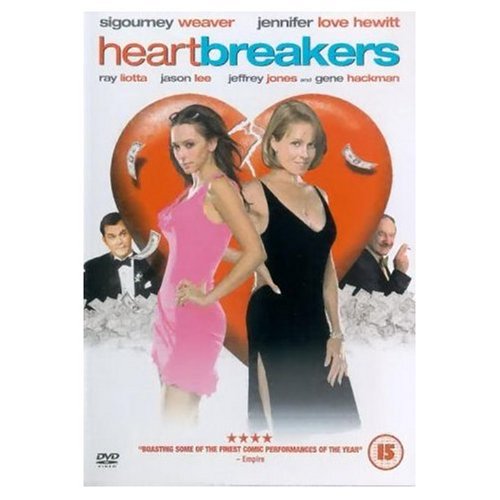 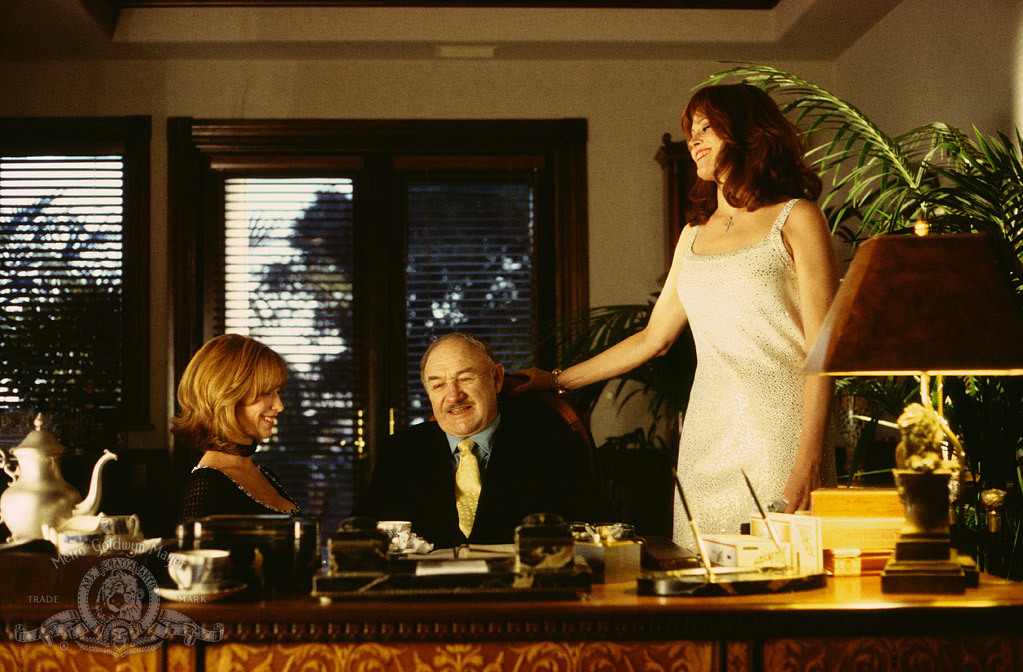 Max and Page Conners (Sigourney Weaver and Jennifer Love Hewitt) are a mother-daughter con artist team. When the film opens, the Conners are finishing a con on Dean Cumanno (Ray Liotta), an auto-body shop owner and small-time crook. The con, which the Conners have played many times before on other men, involves Max marrying Dean, passing out on their wedding night to avoid consummating the marriage, and then Page (posing as Dean’s secretary) luring Dean into a compromising position to justify Max’s immediate divorce and hefty settlement. The con is a success.
Page declares that she wants to go solo. Max initially relents, but when they go to the bank to split their earnings, they’re confronted by an IRS agent (Anne Bancroft) who declares that they owe the government a considerable sum on top of the rest of their savings, which have already been seized. Page reluctantly agrees to work one last con with Max in Palm Beach, so to get enough money to pay off the IRS and set Page up to work on her own. For their target, they choose widower William B. Tensy (Gene Hackman), a tobacco baron who is addicted to his own product. While working the main con with Tensy, Page attempts a side con without her mother’s knowledge. Page targets beachfront bartender Jack (Jason Lee), who is worth $3 million, but develops genuine feelings for him. Max learns of the side con and tells Page to break the relationship off, which Page does reluctantly.

Tensy proposes to Max ahead of schedule, but before they can get married, he accidentally chokes and dies while trying to initiate sex with Max. While Max and Page are deciding what to do with the body, Dean arrives, having tracked Max down to apologize and propose to her again. Dean figures out that Max and Page conned him, and threatens to call the authorities. Max offers to return Dean’s divorce settlement money if he’ll help them make Tensy’s death look like an accident. Max tells Page that their money wasn’t really taken by the IRS; the agent was Max’s mentor, Barbara, who agreed to help prevent Page from leaving. However, when Max, Page and Dean go to the bank, the money really has gone, having been liquidated in an act of betrayal by Barbara.

In order to help Max, Page returns to Jack and accepts his proposal, planning to work it as a regular con. Page insists that Jack will not cheat on her, but is heartbroken when, on their wedding night, she breaks into her mother’s room and finds him in a compromising position with Max. After the divorce settlement is paid, Dean confronts Max about the ethics of their con, pointing out that even a “goody-goody” like Jack is only human. Max reveals that Jack actually turned her down and that she had to drug him, but she defends her actions by saying that Jack would hurt Page eventually. Dean counters that Max has no right to keep Page from the man she loves because of what “might” happen.

Chastened, Max tells Page the truth, admitting that her efforts to protect her daughter have only hurt her in other ways. Page returns to Jack, giving him back the bar he’d had to sell to pay the settlement, and tells him her real name. Max and Dean also get together, Dean having admitted that he still loves Max despite what she put him through. The final shot of the film is of Dean — using the name ‘Stanley’ — romancing Barbara, with Max watching them via binoculars, implying that Max and Dean are now working together to get Max’s money back from Barbara.
Jennifer Love Hewitt escapes her tormented ‘I Know What You Did Last Summer’ role to shine as an assistant professional con artist the Weaver whereas Sigourney Weaver really shows off her incredible acting ability as Hewitts Con artist Mother, a far cry from her famous ‘Alien’ role. The assisting performances really boost the films comedy including Gene Hackman and a cameo from Carrie Fisher. The comedy is hilarious, the acting top notch.