Hazen Kaine (Dominic Purcell) is a ruthless modern-day assassin, wanting out, and is hired for one final job, determined to quit the business after carrying out that one last job involving a European royal family, kidnapping the two daughters. Hazen easily completes this task, and locks the two girls in a connex box and discovers that one of the girls is wearing a necklace with a charm that looks similar to a tattoo he has and takes the charm from the young girl, which opens a portal to the Middle Ages.[3]

Once there Hazen soon gains his bearing and realizes quickly that a village before him is being attacked by a dragon. Hazen runs to the village when he see that the dragon has noticed him and now attacks him too. He uses his pistol to fire at the dragon, when two sisters Arabella (Ralitsa Paskaleva), and Emeline (Daria Simeonova) notice this, they call to him and bring him into their home for safety. The sisters soon take him to their shaman where he finds out he was chosen to return to the Middle Ages and bring back order to a kingdom in chaos. Hazen comes to realize that he must stand against the evil King Tervon (Marian Valev), who has seized the kingdom for himself. He and the sisters form an army and head for Tervon’s castle, but are ambushed by the king’s armies. After a serious battle Hazen faces and easily defeats Tervon in a duel. It is also revealed the dragon which attacked the village earlier is actually controlled by Tervon, who calls upon it to make his escape when he is defeated in the duel against Hazen. Now Hazen finds himself up against an evil king, his armies, and the dragon he controls as Hazen know now he must fight on the side of good. He and Arabella finally reach Tervon’s castle and Hazen defeats and kills him with ease.

Arabella tells him he must save the girls he locked in the connex box. Hazen returns to his time, but the dragon now under no ones control follows him trying to kill him. The men who hired him are trying to kill him as well. He finds the man who hired him holding the girls at gunpoint. He fights the remaining henchmen and one of them is carried off by the dragon, which heads off some place unknown. Hazen returns the girls home, and their father allows him to leave unharmed; to which Hazen thanks him in return and walks off. In the final shot, the dragon is seen flying overhead in the background.

I wouldn’t go in expecting the original In the Name of the King, but I found this new film to be one the most enjoyable action movies I’ve seen in a while. 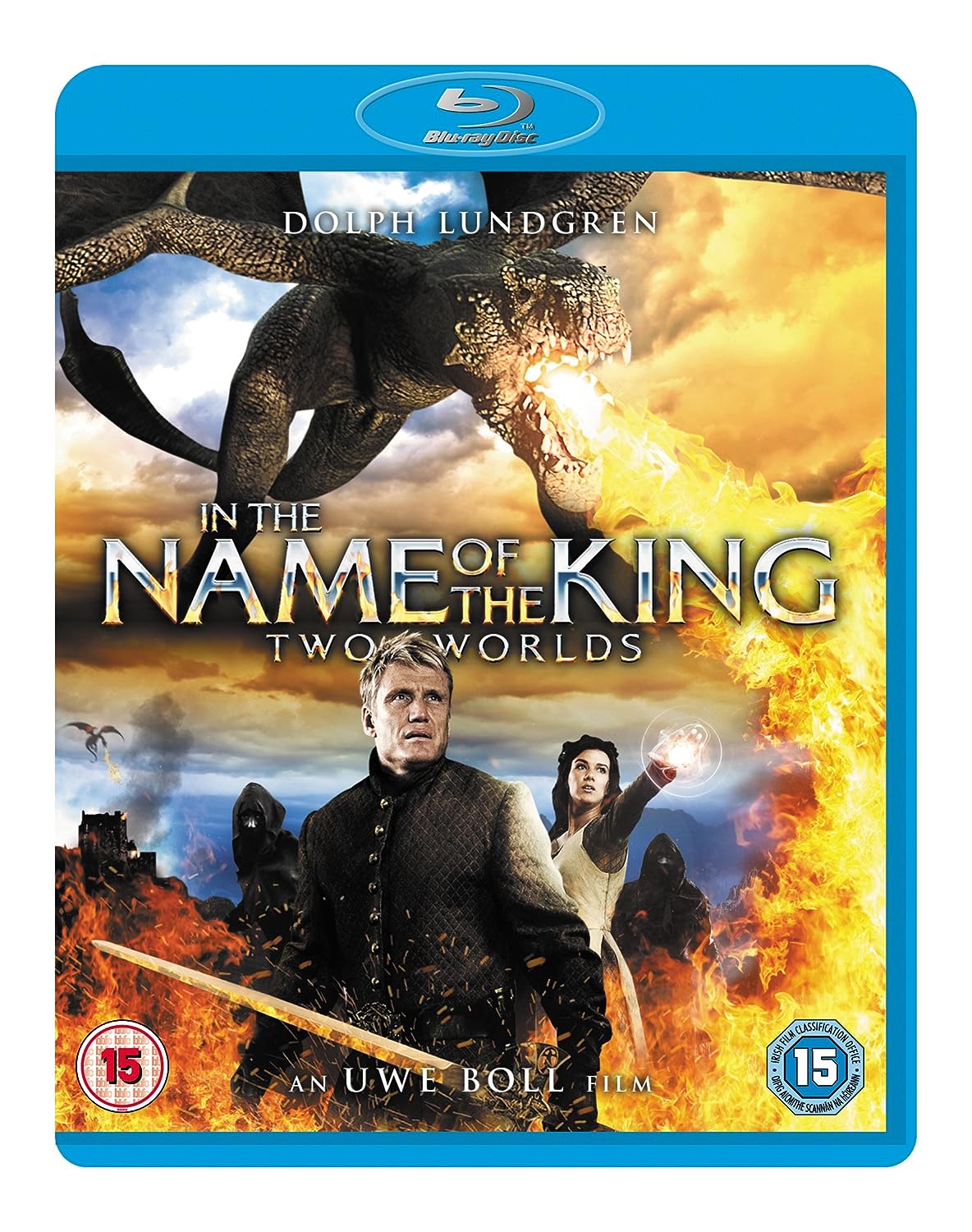 Granger, a former Special Forces soldier living in modern-day Vancouver, is sent on a quest to fulfill an ancient prophecy. He is forcibly pulled into a time portal in his home after fighting off a small group of hooded assassins who try to kill him. He finds himself several hundred years in the past, in the forested war-torn Kingdom of Ehb. Granger teams up with an unlikely band of allies, accompanied by a female doctor named Manhattan. His goal is to slay the leader of the “Dark Ones”, a witch known only as the Holy Mother. Fighting against all odds, Granger must free the land from the grasp of the evil tyrant Raven, save the kingdom, and find a way to get back to his own time.Movies where fantasy heroes are traveling to the modern age (from ‘Beastmaster 2’ to ‘Masters of the Universe’) are usually cheesy. They fortunately tried the other way around here and moved a modern day hero to the distant past: Dolph Lundgren. As Granger the Stranger, he has unusual things to worry about, like drinking water probably full of bacteria, and he certainly has no respect for kings and witches. Natassia Malthe gets the funniest part, which must have been a nice change for her after the Bloodrayne stuff: she is a doctor trying to find out more about the medicine of the future. The story is well paced, so the 90 minutes passed quickly, but I was left with a feeling that I didn’t quite get what I expected. 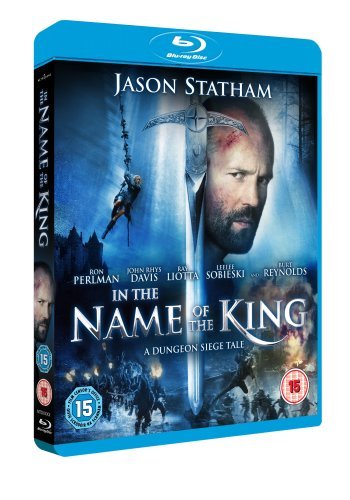 In the previous war involving the Kingdom of Ehb, a three-year-old boy was found wandering the field of the Battle of Oxley Pass by the rancher Norick (Ron Perlman) and adopted by the town of Stonebridge. While Norick could be considered his stepfather, the child was cared for by the entire town, including the family of Basstian (Will Sanderson) and Solana (Claire Forlani). His identity unknown, the boy grew up to be known as Farmer (Jason Statham), married Solana, and was raising his first son Zeph (Colin Ford) when war suddenly struck again with a surprise attack by the Krug. The adversary was a Magus-in-exile, Gallian (Ray Liotta), sadistic, megalomanical, and very powerful, influencing the normally primitive, almost animal-like Krug to take up arms, don armor, and fight against Ehb with a courage, intelligence, and ferocity that surprises all of the Kingdom’s inhabitants. While King Konreid (Burt Reynolds), Commander Tarish (Brian J. White), and a significant proportion of Ehb’s standing army surveys the damage at and seeks recruits from Stonebridge, the King’s nephew Duke Fallow (Matthew Lillard) and Muriella (Leelee Sobieski) allow Gallian to infiltrate the castle. Muriella’s father Merick (John Rhys-Davies), the King’s Magus is with the King at Stonebridge, and takes the liberty to investigate the matter of Farmer’s true identity.
Farmer’s adopted name belies his leadership and combat abilities and, in defiance of the King, he convinces Stonebridge’s civilian combatants to mount a rescue mission. Gallian, via an avatar, had killed Zeph and taken Solana and other inhabitants of Stonebridge prisoner. Farmer’s rescue mission goes very badly, Gallian nearly kills him because of the threat he poses (a mechanic of Kings, Magi, and magical power in the movie’s world.) Farmer kills several of Gallian’s avatars and escapes execution with the help of Merick, who brings him before the King to reveal his true identity as Camden Konreid, the King’s son, solving a major inheritance problem: Duke Fallow is selfish and immature, poor material for royalty even if he weren’t in league with Gallian. Muriella had betrayed Ehb and her father largely by accident: she fell in love with Gallian, who proceeded to deceive and train her, stealing her power. After she realized his dark nature, she breaks off their romance, and confesses to her father Merick, who finally has an answer to another problem of his: a growing imbalance of the magical power in Gallian’s favour. To offset this, the normally reclusive nymphs of Sedgwick Forest, led by Elora (Kristanna Loken) side with Ehb against Gallian. 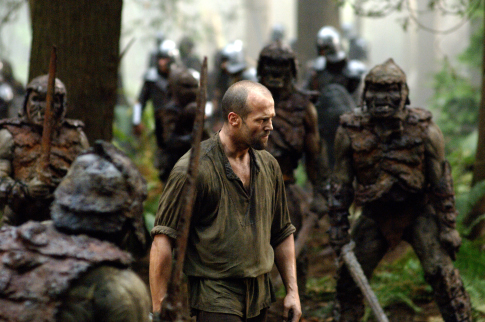 The King decides on a surprise attack against Gallian’s advancing forces, and Duke Fallow, caught in his treachery, has only his personal guard remaining. Gallian seeks the blood of Farmer, who prevails, while Duke Fallow succeeds in mortally wounding the King, who dies after the forces of Ehb force Gallian to retreat. Farmer’s brief battlefield coronation surprises everyone except Gallian, and he decides to press to the attack all the way to Gallian’s keep the following day. Farmer leads a small force consisting of Merick, Muriella, and Elora through mountains to Gallian’s back door. The main force led by Tarish and escape efforts led by Norick and Basstian keep Gallian busy, even as he interrogates Solana. Gallian’s magical sense for royal blood reveals to him that Solana is pregnant with Farmer’s second child, and because of his preoccupation with this, she is able to join in the final battle between Gallian and Farmer’s infiltration team. Elora is not able to enter, while Gallian kills Merick and defeats Muriella’s magic; Solana and Farmer kill Gallian together. With his magical influence gone, Gallion’s avatars vanish and the Krug immediately revert to their natural disposition, retreating from Tarish’s hard-pressed forces. The movie ends with the royal couple, still in their peasants’ clothes, happily reunited.This was just an okay movie to watch, there will be some moments that you will be annoyed but there will also be a lot of moments on which you won’t say a word. A nice movie to watch on a night off, but don’t expect anything inspiring..