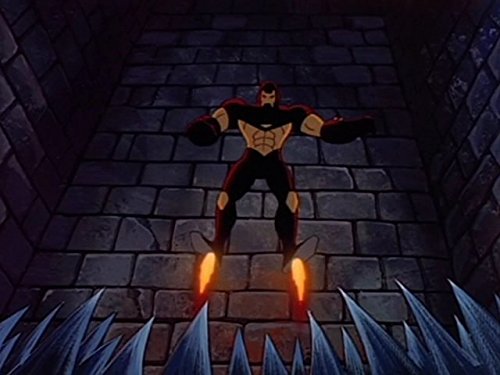 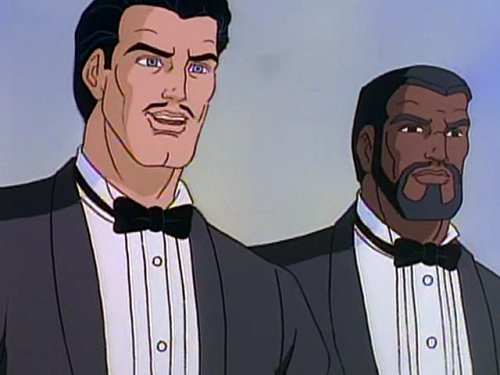 Although only lasting two seasons, Iron Man was the subject of a major overhaul between seasons when its production studio was changed. The result was a massively changed premise, tone, and general approach, which left the disparate seasons scarcely recognizable as being two halves of the same series.

The first season of Iron Man featured little more than a Masters of the Universe-style battle of “good against evil”, as billionaire industrialist Tony Stark battled the evil forces of the world-conquering Mandarin as the armored superhero, Iron Man. In his evil endeavors to steal Stark’s technology and Iron Man’s armor, the Mandarin led a group of villains consisting of Dreadknight, Blizzard, Blacklash, Grey Gargoyle (when it comes to fighting Iron Man and his team, he has a tendency to accidentally turn his fellow villains to stone), Hypnotia (Dreadknight and Blacklash were rivals for the affections of Hypnotia), Whirlwind, Living Laser, MODOK, Fin Fang Foom and Justin Hammer. To combat these villains, Iron Man had the help of his own team (based on Force Works, a then-current comic book team which has since faded into obscurity), including Century, War Machine, Scarlet Witch, Hawkeye (replacing U.S. Agent from the comics) and Spider Woman.

The season consisted mostly of single-episode open-and-shut-case adventures, with two two-part stories late towards the end. Unlike many other Marvel animated series, despite featuring over-the-top titles that paid homage to the early Stan Lee written Marvel comics of the 1960s (for example, “The Grim Reaper Wears a Teflon Coat”, and “Rejoice, I am Ultimo, Thy Deliverer”), almost none of the episodes were adaptations of comic book stories, consisting instead of original stories penned by Ron Friedman, occasionally collaborated on by Stan Lee himself. The closest the season came to adapting a comic book tale was in the two-part “The Origin of Iron Man”, which recounted a (modified and modernized) version of the character’s comic book origin  just before the season concluded.

This late-run recounting of the title character’s origin is symptomatic of what is generally thought of as the season’s greatest weakness – despite (or perhaps because of) having such a large cast of characters, very few of the show’s heroes and villains were actually developed in any way, leaving viewers unaware of their personal stories and powers. The show is generally held to have been at its best when filling in these origin blanks (MODOK in “Enemy Without, Enemy Within,” Iron Man and the Mandarin in their self-titled “The Origin of…” episodes), but these were rare occasions, with virtually every other plot simply consisting of the Mandarin attempting to steal Stark’s newest invention and being bested, often through very strange and illogical means (with the nadir perhaps being Iron Man somehow using the energy of a small tape-player to restore his armor to full power in “Silence My Companion, Death My Destination”).

A small sub-plot in the first season revolves around Mandarin secretly spying on Force Works. It culminates in “The Wedding of Iron Man” when Stark realizes they have been spied on by reviewing events from previous episodes (and explaining how Mandarin’s forces always knew where they would be), realising that Mandarin has acquired enough information to potentially deduce the true identity of Iron Man. The entire episode’s plot is dedicated to resolving the problem, culminating in Iron Man and his team setting up an elaborate deception where Mandarin sees Iron Man and Tony Stark in the same place with the intention being to convince him that the two men are not the same person (The ‘Tony’ in the situation was an android).

In 1995, Marvel switched The Marvel Action Hour to a new animation studio (as previously mentioned, the animation in Season 1 was provided by the Rainbow Animation Group, while the animation in Season 2 was provided by Koko Enterprises), and with it came new writers (Ron Friedman was replaced by Tom Tataranowicz for Season 2) and new music for each sequence, coupled with a new direction for the series. The first season’s subtle keyboard theme music for Iron Man (composed by progressive rock artist Keith Emerson) was replaced by an intense electric guitar theme featuring the repeated refrain of “I am Iron Man!”, while showing Tony Stark beating red-hot iron plates into shape with a blacksmith’s hammer (possibly to mimic the Black Sabbath song “Iron Man”). Tony Stark’s longer hair style in the second season was based upon the artist Mark Bright’s depiction of Stark from the late 1980s, which is where most of the episodes from Season 2 were based upon.

The new story lines spanned multiple episodes and were no longer “open and shut” cases. They formed a linking narrative, featuring themes of duplicity, consequence, and phobias. Also, the stories were no longer centered on the Mandarin, whose rings had been scattered and whose power had been depleted. While the Mandarin did appear in these episodes, his appearances were reduced to cameos in the cliffhangers at the end of the story, as he tried to retrieve each ring.

Another change was that Force Works was mostly written out of the series, parting ways with Stark after he deceives them in order to work in secret with the Mandarin when Fin Fang Foom and his fellow Dragons were plotting to eliminate Earth. When Stark’s counter plan against Justin Hammer, which includes faking his death without the knowledge of his teammates, leads to a disbanding of Force Works, Julia Carpenter and James Rhodes are the only ones who continue to work with Stark. This split would be revisited with Stark’s ensuing conflicts with Hawkeye over the course of several episodes.

Prior to finding his last two rings, the Mandarin claims his eighth ring from MODOK in the episode “Empowered”. “Empowered” was the clip show of the season, the purpose being that the Mandarin wanted to learn of Iron Man’s recent activities. In the finale,[9][10] the Mandarin, having regained all of his rings, unleashes a mist using the Heart of Darkness to render everything technological useless. Iron Man reunites with Force Works in order to stop him. The Mandarin unmasks Iron Man before their final showdown ends in his death. More specifically, Iron Man manages to reflect the power of Mandarin’s rings, destroying them, and ultimately leaving the Mandarin with amnesia and helpless before a band of desert bandits who likely killed him, or at least cut off his hand/fingers for the rings. After Mandarin was killed, MODOK and the rest of Mandarin’s henchmen were sent to jail. After disappointing ratings, the series was canceled.

After twenty six episodes, Iron Man the animated series remains a very mixed bag. Blame for this shows disappointing quality can be attributed to constrictions placed upon the writers to feature as many Iron Man suits as possible in each episode as free publicity for the toys. On the bright side, it got better, allowing the audience at least 13 episodes of decent animated entertainment.