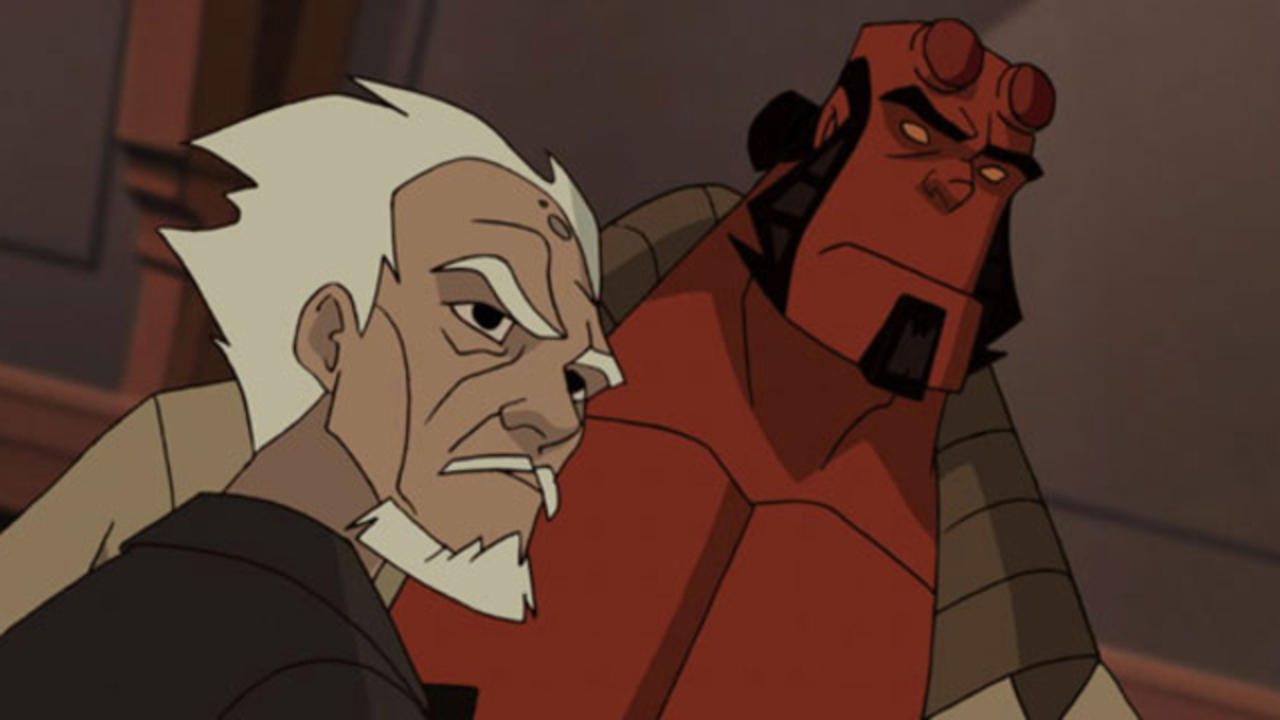 In a series of flashbacks played in reverse chronological order it is related that in 1939, Professor Trevor Bruttenholm investigated a series of murders in Eastern Europe. Erzebet Ondrushko, a vampire who bathed in the blood of innocents to stay young, was responsible. She had sold her soul to the Queen of Witches, the goddess Hecate, and had just kidnapped the fiancee of one of the townsmen. When the search party confronted Erzebet in her castle, all members of the party were horribly killed, and Bruttenholm was left to face her alone. He tricked her into the sunlight, effectively destroying her.

In the present day, an elderly Bruttenholm, who is overcome with memories of his encounter with Erzebet, takes a particular interest in a publicity stunt case in the Hamptons on Long Island. A haunting has been reported in a mansion recently purchased by developer Oliver Trumbolt, a friend of a U.S. Senator with hands deep in the BPRD’s budget, and considered a low priority. Bruttenhom insists that their most advanced team should go: Liz Sherman, Abe Sapien, Hellboy and junior agent Sydney Leach as well as himself (to everyone’s surprise). Bruttenholm does not explain his motives at first.

Ana, a blushing bride-to-be is met on the streets by two elderly women who encourage her to go to her bridal gown fitting, where she meets Erzebet, who had already killed the shop owner and her baby. Ana innocently comments that Erzebet reminds her of her “older” sister, offending her until she notices that Erzabet has no reflection. She screams, and everything goes dark. Later, upon being told that Father Lupescu was the one who convinced Ana to go to her fitting despite the disappearances of the young girls in the village, Erzabet pays him a visit, frightening him with her dark powers and confirming that his faith is not enough to keep her power from affecting the town. The BPRD team arrives at Trumbolt’s site and sets up to investigate the haunting. Despite a few open windows, a creepy lifelike replica of Erzabet and an old, suspiciously familiar-looking groundskeeper, everything seems normal until night falls and they each encounter strange ghostly apparitions, culminating in dozens of spirits of Erzabet’s former victims. Excited that he may have found a goldmine, Trumbolt ignores the professor’s warnings and is attacked. Ana goes to visit Father Lupescu who convinces her that she should not fear danger because the church is strong and the faith will keep her from harm. She hurries off to have her fitting done, running into Professor Bruttenholm as she leaves. Bruttenholm attempts to explain to Lupescu about Erzabet’s true nature and her allegiance to Hecate, but he becomes offended and turns Bruttenholm away.

Using his abilities to detect metal, Leach finds a secret passageway through the house’s cellar, inadvertently coming across Trumbolt’s body, drained of blood. The blood has been placed in a bathtub, apparently for Erzabet’s revival. Bruttenholm and Liz head for the gardens to stop Hecate and Erzabet’s Harpy-Hags from summoning her back from the dead while a werewolf attacks Hellboy and Abe. Abe is knocked unconscious and taken by the harpies for experimentation while Hellboy fights the werewolf, eventually subduing it and revealing that it is Father Lupescu, the groundskeeper whom Bruttenholm had earlier identified. Meanwhile, Liz and Bruttenholm are attacked, first by wolves, then by Erzabet’s withered body, which knocks Liz out and takes Bruttenholm. Hellboy is dropped through a hole in the courtyard and meets Hecate, who is perplexed as to why he helps the mortals, and tries to lure him to the dark side. He bluntly refuses again and again, forcing Hecate to take a physical form to deal with him. After Abe escapes them, the harpies come across Hecate, but one is killed as she violently thrashes with Hellboy and the other escapes. Erzabet bathes in Trumbolt’s blood and rejuvenates herself, but she begins to wither and decay again from the Holy Water which Bruttenholm had added to the bath. He breaks off a chair leg and finishes her off. Her death enrages Hecate who brutally attacks Hellboy and badly wounds him, and when he realizes her weakness is the sun, he lures her outside, forcing her back into the darkness of her own realm, defeated.

Bruttenholm is preparing for his trip to Transylvania where rumors have it that there is a vampire on the loose. As he is packing, his colleague comes in and they discuss the “right hand of doom” (Hellboy’s stone hand); Bruttenholm asserts that so long as evil exists, good will rise up against it, before revealing an image of Hellboy’s right hand, signifying that he will be responsible for the destruction of the world.Hellboy wakens in his bed, admiring Bruttenholm, his adopted father, before falling back to sleep again.

Hellboy: Blood and Iron is a solid Hellboy spinoff movie, and serves as a window into the past of the underused Professor.

The film starts in the middle of an unspecified mission which sees Hellboy, Liz Sherman and Abe Sapien battling bat-worshipping Mayan zombies who are led by a gigantic zombie bat. The group are eventually able to defeat their opponents when Liz unleashes her pyrokinetic powers, although she is still unsure of her ability to control her powers.

Meanwhile, Japanese folklore expert Professor Sakai obtains an ancient scroll containing the myth of two demonic brothers, Thunder and Lightning. Hundreds of years ago, the brothers roamed the earth, unleashing storms on the lands of a Japanese Lord. In exchange for mercy, the Lord promised to give them his beautiful daughter. One of the Lord’s samurai warriors was in love with the daughter and hid her in a shrine to protect her. Armed with the Sword of Storms, a mystical sword imbued with an ancient spell to defeat Thunder and Lightning, the warrior fought the brothers and trapped both demons’ spirits in the sword. Although his lands and daughter had been saved, the Lord was not pleased since the warrior’s actions meant the Lord had broken a promise. In an act of vengeance, the Lord summoned the gods to turn the warrior to stone and then killed his daughter in the shrine.

In current-day Japan, Professor Sakai is possessed by the spirits of Thunder and Lightning while reading the scroll. The demonic brothers send the professor in search of the mystical sword. After he attacks the sword collector who currently owns the sword, the Bureau for Paranormal Research and Defense is alerted and Hellboy, Kate Corrigan, and a psychic named Russell Thorne are called in with a team to investigate. During the investigation, Hellboy picks up a discarded katana and vanishes to another dimension that is reminiscent of ancient Japan. Hellboy meets a wise kitsune, who tells him that the sword he holds is the Sword of Storms and that the goal of his journey lies to the west. Hellboy travels through the alternate universe and learns that he can only return to his own world by breaking the sword, although that will also free the demonic brothers. Along the way Hellboy encounters several mythical Yōkai, sent by the still possessed Professor Sakai, who try to steal the sword from him, including the kappa, a trio of rokurokubi, a group of nukekubi, a Jorōgumo, Gashadokuro, tengu, Yomotsu-shikome, and the restless ghost of the Lord’s daughter. Hellboy is able to outsmart or defeat all of them.

Meanwhile, Abe Sapien and Liz Sherman are called to the sites of disturbing earthquakes and discover that Thunder and Lightning are summoning their brothers, the dragons. They meet the same kitsune who guided Hellboy and are instructed to stop the dragons. One of the dragons attacks them but Liz manages to hold it back using her pyrokinetic abilities. Professor Sakai, in the meantime, has gone to the shrine where the Lord killed his daughter, followed by Kate and Russell who have just survived an attack by several objects from Japanese folklore. At the same time, Hellboy is tricked into destroying the sword by the giant Oni (who faded away before the final blow can be struck) which releases Thunder and Lightning, frees Professor Sakai, and sends Hellboy to the shrine as well. Hellboy eventually manages to trap both spirits in the sword again. As a result, the dragons are sealed back into the underworld. The ghosts of the daughter and the Lord possess Kate and Russell, in order to replay the daughter’s execution. Hellboy accidentally frees the ghost of the samurai warrior from its stone form and then convinces the Lord to forgive his daughter and the warrior, thereby breaking the cycle of their unending deaths. The spirits depart, thankful to Hellboy and the others for helping them.

If you are seriously into Hellboy or even if you are just a casual fan of the movie then you totally have to get this.