After the sheer insanity/genius of giving a Kamen Rider a car instead of a bike, it’s almost as if Toei went motif crazy in order to make the 2015-16 Rider seem just as innovative. Eyeball collectibles, hoodies, historical figures, a pirate ship that can transform into a giant iguana – these are just some of the facets that make up Kamen Rider Ghost. Spanning a total of 50 episodes, including a crossover with currently airing Super Sentai series Doubutsu Sentai Zyuohger, the 17th Heisei era Kamen Rider series (and 26th in total) marks Takuro Fukuda’s debut as lead writer and stars Shun Nishime as the titular character.

On his 16th birthday Takeru Tenkuji, the son of a ghost hunter who died ten years prior, is killed by a monster known as a Ganma while trying to protect his friends from its attack. Resurrected by a mysterious hermit and bestowed with a device known as the Ghost Driver, Takeru gains the ability to transform into Kamen Rider Ghost using orb shaped trinkets known as Eyecons. However Takeru now only has 99 days to gather 15 additional Eyecons contain the souls of historical figures, which when brought together will grant him one wish – to be brought back to life.

On his journey Takeru re-encounters his childhood friend Makoto Fukami, who along with his sister was sucked into the Ganma world ten years ago and has now taken the guise of Kamen Rider Specter. Though initially clashing, the two Riders also face off against the Ganma forces who are devoted to invading our world and reshaping it in their image of perfection. Enemies include the Ganma prince Alain (later becoming Kamen Rider Necrom) and his brother Adel – who also allies himself with the Ganmeizers, 15 deities that defend the Ganma world. 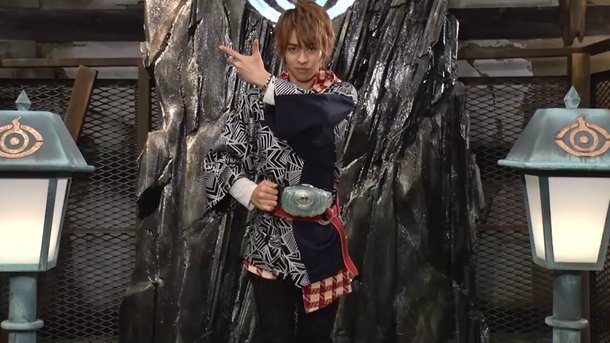 The series opens with Takeru on his 99-day quest to collect the 15 Dragon Balls Eyecons and wish for his mortality back from the Eternal Dragon Great Eye, during which he encounters past historical figures and gains new power ups along the way. Each Eyecon grants a new form, which means there are a total of 15 forms on offer before the series is even halfway through. Takeru himself doesn’t receive all of these initially, but even with that in mind it’s still a case of him receiving a new form almost every episode. Even the first episode pulls no punches about how quickly they’re sped through, as Ghost receives the first of his Heroic Eyecons (Musashi) before the audience has even properly gotten to grips with his base form. The speed they’re gone through not only means that many of them don’t really get a decent amount of exposure.

However this initial premise only lasts a mere 11 episodes, as Takeru sacrifices his wish to bring Makoto’s sister Kanon back to life instead. Rewarded with a reset countdown and an upgraded base form, the Eyecon gathering starts anew as the Ganma threat becomes properly realised. This is where the show becomes a little more interesting as Alain’s character development takes centre stage, with the Ganma’s argument that humans don’t deserve their world providing that dash of morality that makes Kamen Rider villains so interesting. From there the show moves into yet another arc as it introduces Adel and the Ganmeizers, returning to the “victim of the week” format as this time the cast connect with the Heroic Eyecons rather than finding them. This is the point the show decides to go big on themes (“humanities potential is infinite” etc.)

Kamen Rider Ghost is a great addition to the Kamen Rider family, Thou not as good as Kamen Rider Drive it still holds its own and the last episode gives us a tease of Kamen Rider Ex-Aid which looks to be very intresting. 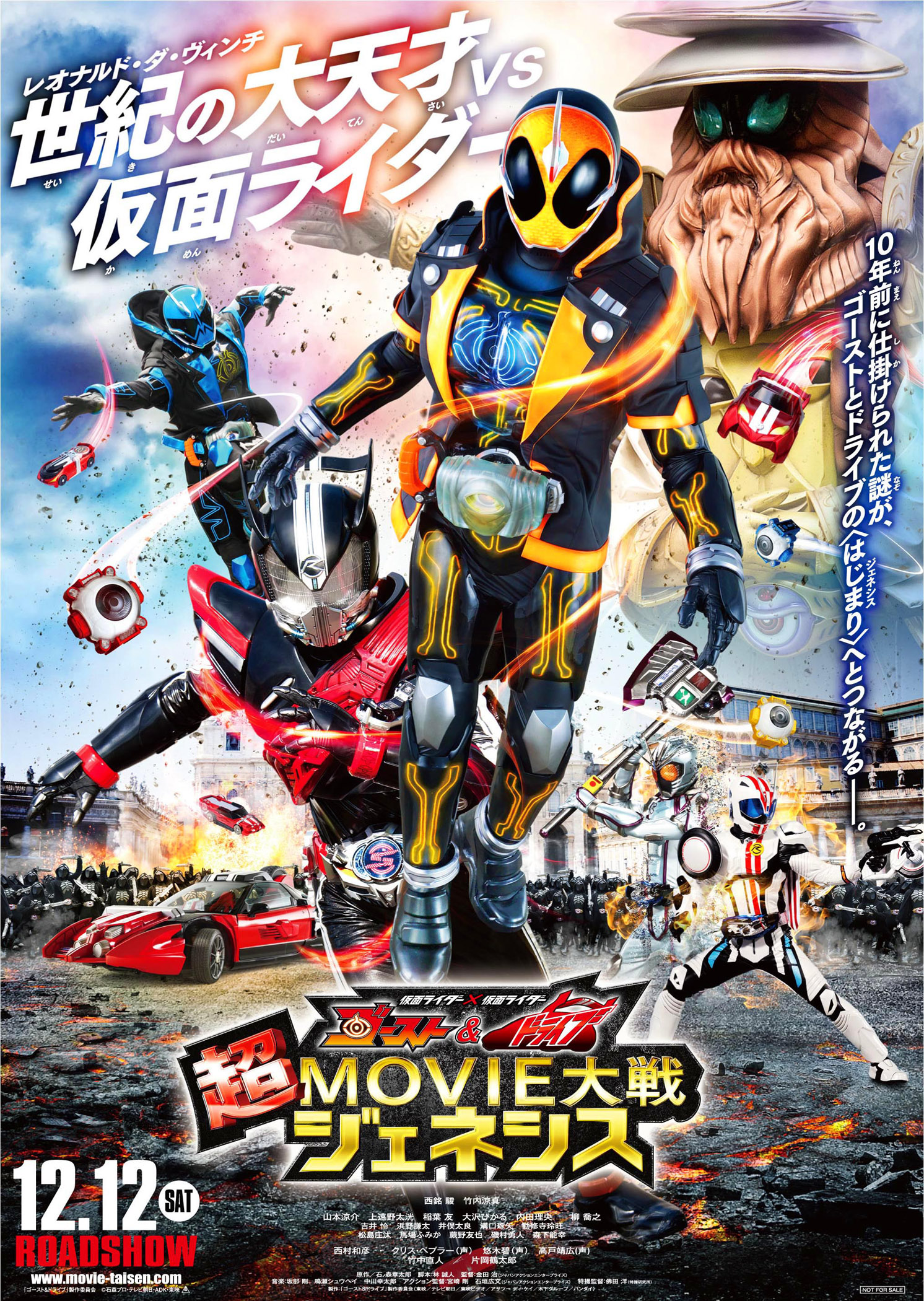 Just as the latest Kamen Rider is beginning to find his footing, his predecessor returns for one last goodbye as part of a Movie Wars crossover which has been a franchise staple for the past seven years. This time it’s the turn of Kamen Rider Ghost, reuniting once more with Kamen Rider Drive in the time-travelling Kamen Rider x Kamen Rider Ghost & Drive: Super Movie Wars Genesis. Other than boasting a “super” along with the typically lengthy title, Movie Wars Genesis throws one big format change into the works – making it a particularly notable entry in this popular series of crossovers.

When first division police officer Shinnosuke Tomari is asked to investigate mysterious going ons that cannot be explained by science, he encounters Takeru Tenkuji and Mysterious Paranormal Insitute during a fight against a Ganma thief. Following a brief misunderstanding between Kamen Riders Drive, Mach, Ghost and Specter, the two groups settle and begin to learn more about each other. All of a sudden a space/time portal appears, sucking in both Takeru and Shinnosuke and transporting them back to 2005. Here the two find themselves in the care of Takeru’s father Ryu – mere days before his untimely death.

However what they also discover is a Ganma plot to awaken a Leonardo da Vinci Eyecon, and a young Akari is right at the centre of it. Meanwhile in 2015 Specter and Mach have their own problems, as the space/time rift causes the resurrection of Roidmudes Heart, Brain and Medic – led by  none other than the Da Vinci Ganma himself. What unfolds is a battle across two time periods, as Ghost and Drive battle in the past to defeat the Ganma and fix the present.

Regular viewers of the Movie Wars series will notice that the biggest change when it comes to Movie Wars Genesis is that the Rider 1 segment/Rider 2 segment/Crossover format has finally been done away with in favor of a feature-length story that features the casts of both series’. While it still may have two stories running parallel, the film happily jumps between the past and present where appropriate to keep the story flowing. This new approach highly benefits the crossover aspect of the film, tying the two Riders together early on whereas previous movies kept them strictly apart until the last half an hour or so.

This revamped format definitely works just as well in execution as it does in theory, with the casts of both Drive and Ghost almost immediately showing excellent camaraderie that develops beautifully. The cast of Kamen Rider Ghost have constantly proven themselves to be a welcoming bunch and welcome the cast of Drive with open arms. This doesn’t just apply to the five Riders either  the extended casts also work wonderfully together. Villains are also handled well too, with the idea of a Da Vinci Eyecon/Ganma tying nicely into Ghost’s overall themes. The presentation of the three Renaissance Ganma is good enough to portray them as a threat more notable than the usual Ganma, but without having to rely on the gimmick of a poorly placed movie Rider to up the ante.

Movie Wars Genesis is a film that raises several questions and inconsistencies, but definitely has its heart in the right place. The altered format not only improves the crossover element of the film considerably, it offers a less predictable and more unique viewing experience that will hopefully carry forward into future Movie Wars instalments. As a farewell to Kamen Rider Drive it could have perhaps done better, but it manages to perfectly capture the excitement of Kamen Rider Ghost’s early episodes and provide a satisfying crossover that brings out the best in both casts.