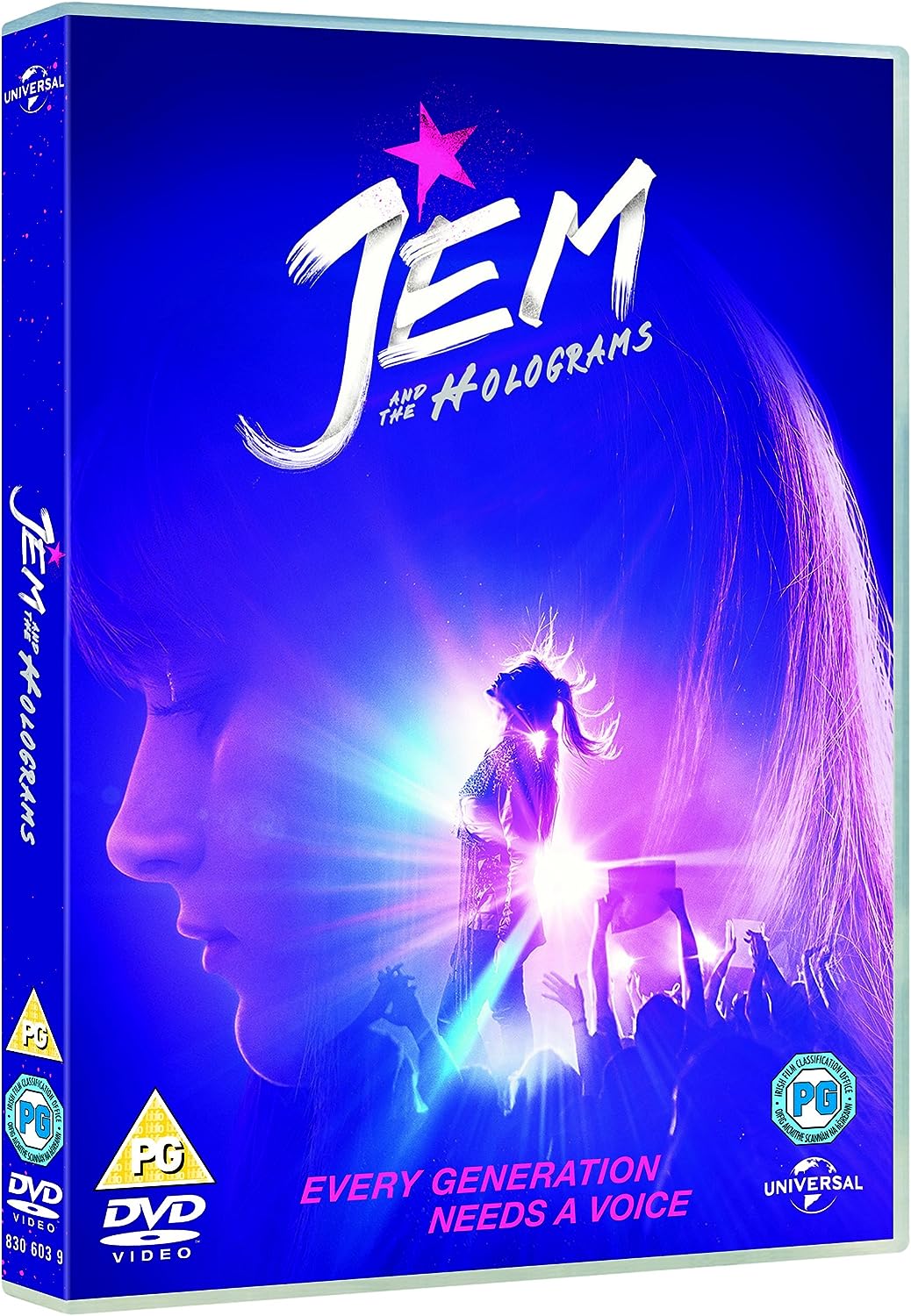 Teenaged songwriter Jerrica Benton and her younger sister Kimber live with their Aunt Bailey and two foster sisters, Aja and Shana. The four girls frequently videotape themselves playing music and wearing colorful ’80s outfits just for fun, but Jerrica is too shy to sing on camera. Jerrica learns one day that due to Aunt Bailey’s financial problems their house will be auctioned. She vents her emotions by recording a song with the video camera Kimber uses to post blogs. She disguises herself by calling herself Jem, her deceased father’s nickname for her.She is interrupted just before deleting the video and an Internet-obsessed Kimber posts it onto YouTube. The video attracts millions of views in a single day. Jerrica is offered a record deal by Starlight Productions and travels to LA with her sisters. They meet music producer Erica Raymond and her son Rio. Erica is polite and courteous with the four girls but shows particular interest in Jerrica, who she sees as a potential superstar.The girls settle down in LA and discuss their next move. They’ve brought along a small robot called 51N3RG.Y (pronounced synergy) built by the Benton sisters’ deceased father, Emmett. The robot suddenly activates itself and leads them on a scavenger hunt. Each clue represents something Jerrica did or wanted to do with her father. The objective is to find several missing pieces designed to fit into the robot so that it can be fully activated. The girls find the first piece in the Santa Monica Pier. They find the second clue in a guitar once owned by Jerrica’s father when, by coincidence, the band plays a concert.Rio and Jerrica begin to develop feelings for each other, much to Erica’s dismay. Erica signs Rio off to another singer in an attempt to keep him away from Jerrica. Aunt Bailey tells Jerrica via FaceTime that their house is going for auction in a few days. Desperate to save the home, Jerrica asks Erica for an advance. Erica says she will oblige if Jerrica agrees to leave her sisters and start a solo contract. Jerrica relents, believing she is doing it for the family. Her sisters discover the truth about the contract, denounce her for leaving them out of the deal, and leave. After a dull solo performance, Jerrica becomes depressed over her mistake and goes to visit the LA house where she used to live with Kimber and her father.Her sisters arrive to visit her at the old house and make amends. They vow to help her finish the scavenger hunt and Rio goes along too. Jerrica realizes that the last piece is the earrings her dad told her to wear, but Erica made her take them off when she first went to Starlight. The earrings are now stored in Erica’s office. Rio and the girls break into Starlight headquarters, almost getting caught by Erica, but succeed. The reward for finishing the hunt is a final hologram message from Jerrica and Kimber’s father. They also discover Rio’s late father’s will, which gives him a majority of shares in Starlight and effectively puts him in control of the company. With the house safe, Jem and her sisters play in their concert together. Rio chats with a woman called Lindsey Pierce at the concert. She offers to give the band the cover of Rolling Stone, and asks Rio what to call the band; he suggests “Jem and the Holograms”.In a mid-credits scene, Erica, now terminated from Starlight, arrives in a seedy junkyard, where she attempts to recruit a group of punkish young women into a band to rival the Holograms. They decline, saying that Erica dropped them the first time they were signed with Starlight. They change their minds when the leader, Pizzazz, discovers that Rio is dating Jem, and take Erica inside. The graffiti on the side of their trailer reveals their name as the Misfits.I was skeptical about this since the first trailer, but I didn’t go into the film with a bad attitude. Some people involved with the film asked the detractors of the film to reserve judgment until they’d actually seen it. That seemed fair. Maybe there was more to it than meets the eye. The vivid and colorful animation of the cartoon is somewhat translated into film here, but only for the handful of performance sequences. The “Holograms” part of Jem and the Holograms is, quite frankly, gone, and the band is only arbitrarily named as such at the end. Synergy is basically a low rent R2-D2, it’s obvious that the $5 million budget wasn’t enough to properly adapt the series. Had they spent another $10 million and used it to realize the characters and the style of the series, maybe this wouldn’t be flopping so badly. 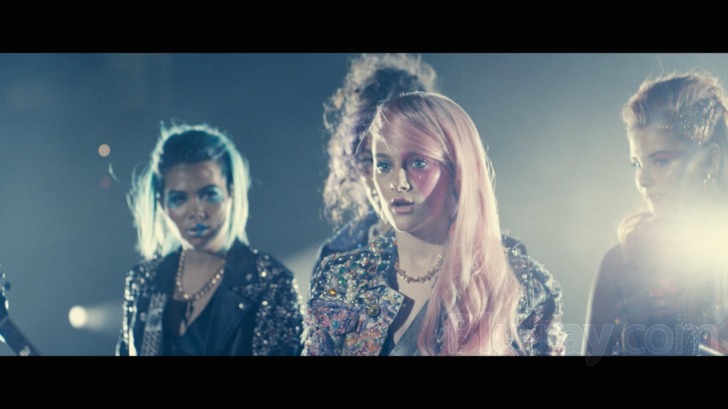 Aubrey Peeples’ acting is fair, and I think she actually put some effort into her performance, but she just doesn’t have an air of excitement about her. Jem/Jerrica just isn’t that fun or adventurous. Juliette Lewis is a pretty generic Cruella DeVille corporate type, but I won’t pretend Eric Raymond was all that interesting to start with (although he served his purpose well enough). Most frustrating of all is the mid-credits stinger. This is the only time you see the Misfits in the movie, and unlike everything else in the movie, they nail them. They’re mischievous, they’ve got attitude, and they can’t wait to get to the top. Perfect. Kesha appears as frontwoman Pizazz, and vows that she’ll get back at Jem, setting up a sequel that almost certainly won’t happen.

Twelve-year-old Cole Johnson is a naïve teenager who tries to fit in with everyone else. When he is bullied by his neighbour Jeremy, his babysitter Bee stands up for him and draws them away from him. The following day, when his parents go out for an overnight stay at a hotel, Bee and Cole spends quality time together until after 10.00pm. About 30 minutes or so later, Cole is encouraged by a text from his best friend Melanie to go see what Bee gets up to after he “goes to sleep”. To his surprise, he sees what looks like a harmless game of Spin the Bottle, as Bee passionately kisses each of her friends as part of a dare. However, as she kisses a nervous nerd called Samuel that she met the other day, she pulls two daggers from behind her back and spears them into his skull, spewing blood into golden goblets. As Cole sees this, he freezes in shock and, in a fit of fear, hurries to his room and ties his bedsheets together and throws them out the window. Unfortunately, shortly after the remaining members of the cult (including Bee) take a blood sample from him, Cole momentarily passes out.

Later, Bee and her posse question why he was spying on them. He, on the contrary, asks them why they are doing this. Bee claims that the blood sample was part of a “science project”, but Cole refuses to believe her. Just then, the cops arrive at the house and one member, Allison, is shot in her left breast, leaving a bloody wound. Max, a muscular quarterback jock, impales a cop in the eye with a pole, whereas Bee slits the other cop’s neck, again spraying blood into John’s face. As Cole re-attempts to escape, he is briefly pursued by John, but accidentally pushes him over the banister and he falls and lands on the floor with a trophy impaling his neck. 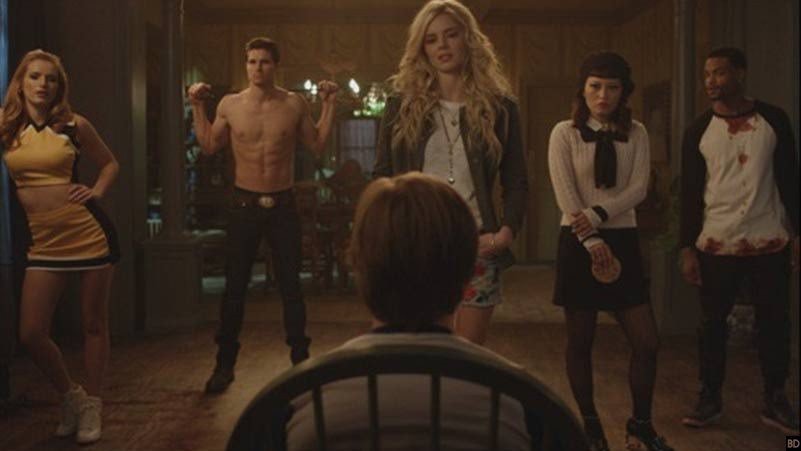 Pursuing after Cole, Sonya and Max find him in a Crawlspace, where he lights a firework at Sonya but it misses her; he then traps her inside just as the firework explodes in a fireball and kills her. Max finds him and chases Cole up to an old treehouse, where after a brawl, the boys fall with Max hung by the rope, exposing part of his spine.Fresh, violent but also funny, The Babysitter is a love letter to the slasher genre. Turn off your brain and enjoy this nice experience. 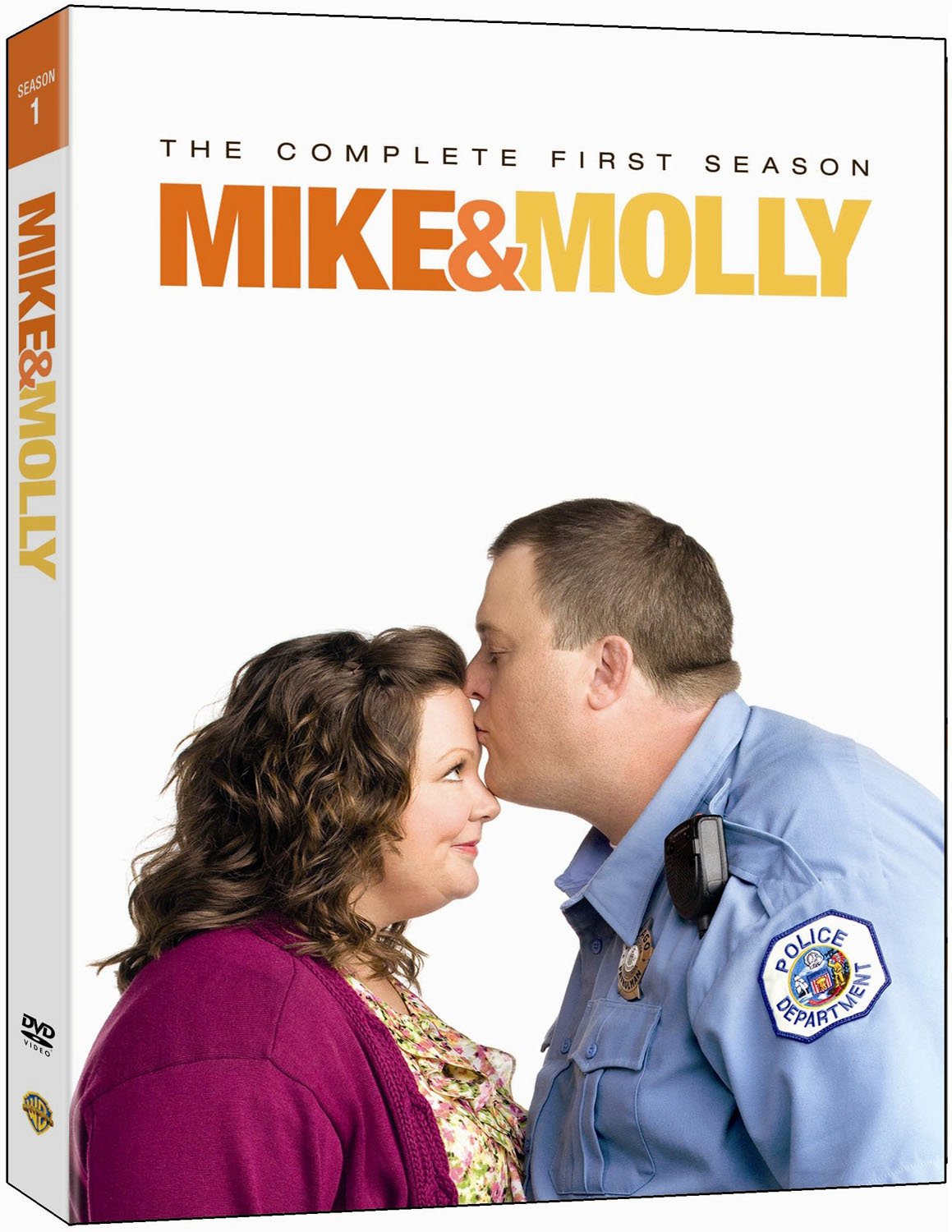 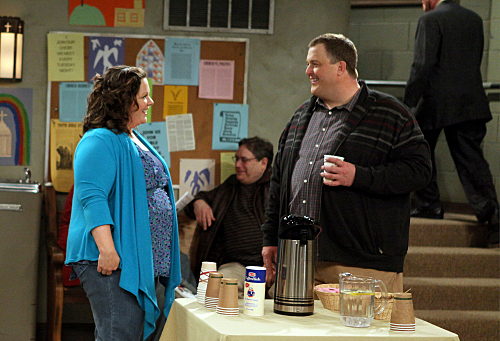 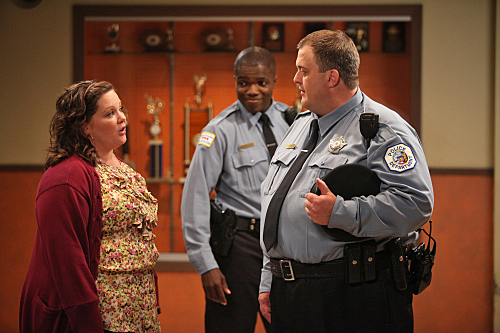 The series focuses on the title characters Mike Biggs (Billy Gardell) and Molly Flynn (Melissa McCarthy), a couple who meet at an Overeaters Anonymous meeting in Chicago, Illinois. After Molly, a primary-school teacher, invites police officer Mike to give a talk to her class, they begin dating. Molly lives at home with her mother Joyce (Swoosie Kurtz), and sister Victoria (Katy Mixon). Joyce is in an on-off relationship with widower Vince Moranto (Louis Mustillo), who is often seen at the house. Mike lives alone in an apartment but is regularly kept company by his best friend and partner in the police force Carl McMillan (Reno Wilson). Other prominent characters in the series include Carl’s grandmother Rosetta (Cleo King); Mike’s mother Peggy (Rondi Reed) and cafe worker Samuel (Nyambi Nyambi). 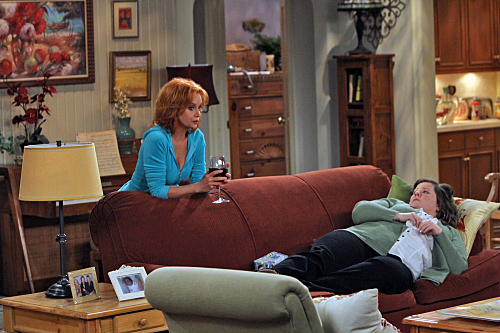 I bought this as I’m a fan of Melissa McCarthy having seen her in several very funny films. I was not disappointed. All the characters are very strong and I have found watching the series completely addictive, just wanting to know how the relationships progress. There are lots of one-liners that literally make me laugh out loud. There is nothing offensive even though sex drugs and alcohol are referred to and represented, it’s not at all smutty. 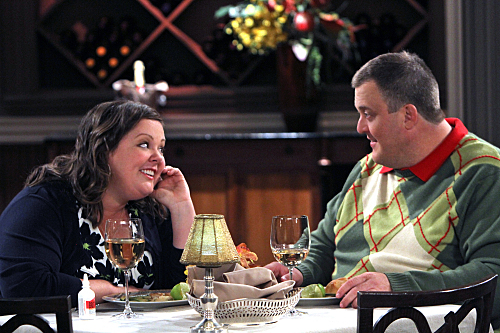 Season One Highlights include 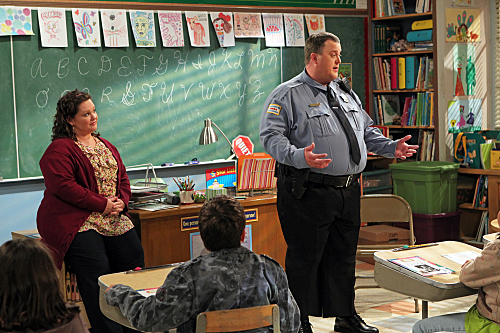 Mike struggles with his new diet. At an Overeaters Anonymous meeting, Molly sympathizes with Mike and invites him to come speak to her fourth grade class. Later, he appears at her home after a robbery and asks her out on a date. She says yes. 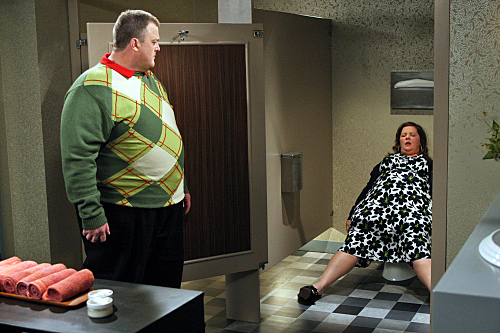 Molly gets a head cold before her first date with Mike. Her mother and sister accidentally both give her medicine and Molly adds wine at dinner. The night ends up being a disaster. Meanwhile, Mike gets fashion advice from Carl and his cousin who own a “Big & Tall” store. 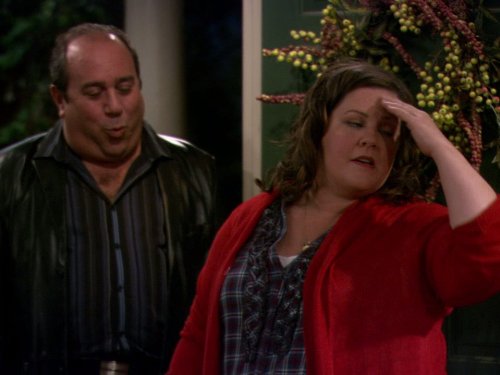 Molly misunderstands Mike’s reasoning for not wanting to come inside her house after a date and breaks-up with him. After getting drunk in a bar, Mike reveals that he’s ashamed of his own body, and that’s the reason why he had been taking things too slow with Molly. After leaving the bar, Mike, Carl, Samuel and the taxi driver, Undugu, go to Molly’s house where Mike decides to serenade Molly. When he reaches her window, he tells her why he wasn’t ready to take the next step, and that he wants the first time to be very special. However, he passes out while on the ladder and the gang is forced to spend the night at Molly’s house. 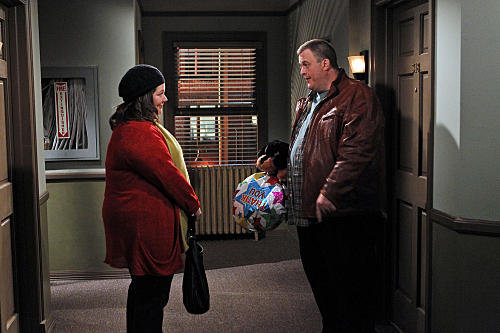 After spending the weekend together, Mike and Molly are ecstatic. To avoid getting too clingy, Molly tries to slow down, but it doesn’t help when Mike visits her in the school with a Teddy Bear. 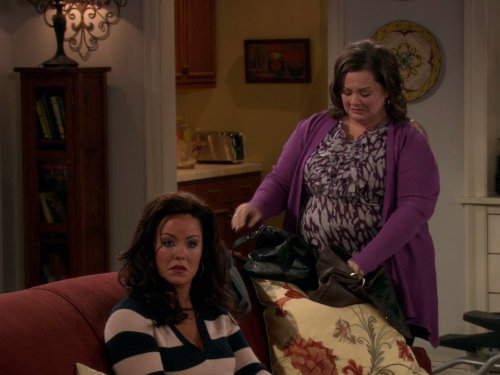 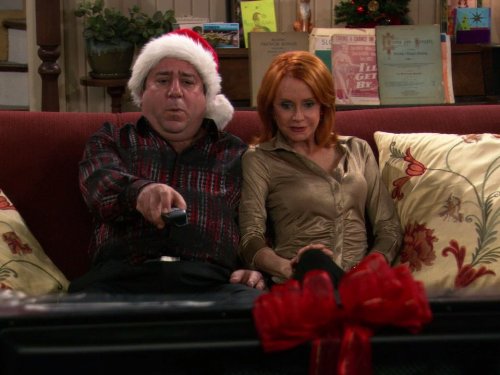 Mike has no idea what to get Molly for their first Christmas as a couple. He runs a lot of ideas through Joyce & Carl, but they reject it all. He is also unable to take the hints Molly gives him. Finally he ends up buying her expensive jewellery. Molly gets Mike a leather jacket, but has to exchange it for a video game when Mike ends up buying a jacket himself. 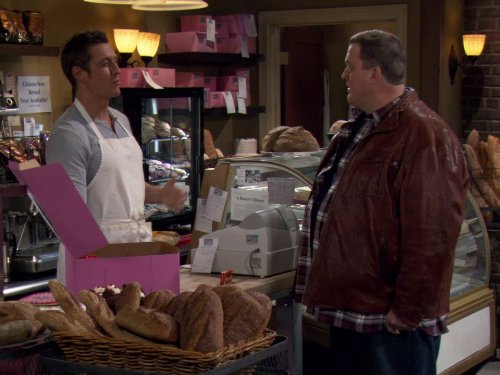 Mike orders a special cake for Valentine’s day and ends up meeting the baker, who turns out to be Molly’s ex-fiancé, Kyle (Robert Gant). He gets very upset because Molly never mentioned being engaged, but later discovers that Kyle is gay. Vince & Joyce go to a adult motel for their first Valentine’s Day.

Mike & Molly meet Peggy’s new “friend from church”, Dennis (William Sanderson). They instantly like him, but when he brings up wedding bells, they feel a bit pressured. After a talk with Carl’s grandma, Mike decides to propose to Molly. She says yes.

Season one is very much about first’s, finding new love and the ups and downs of a relationship.