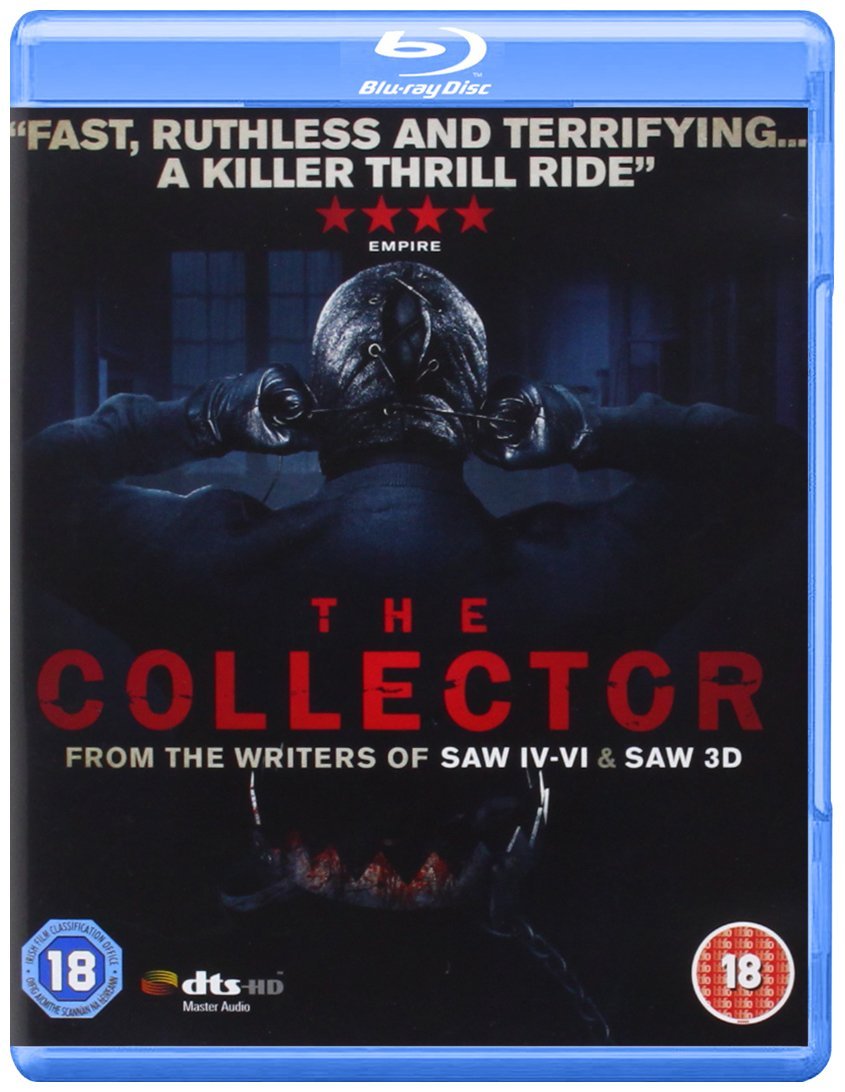 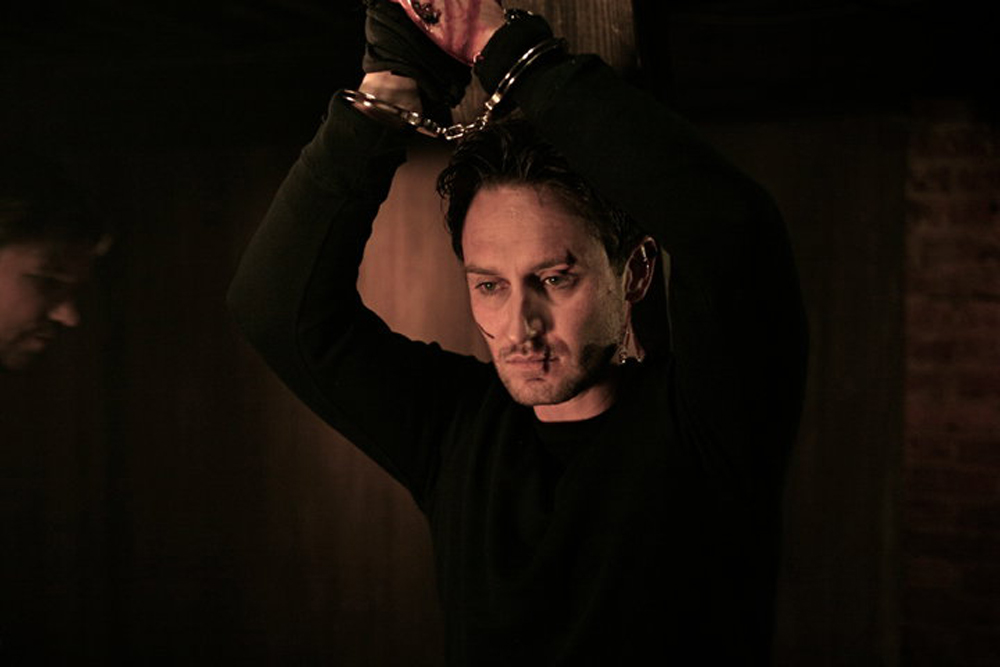 A man named Larry and his wife return home to find the power is out. They discover a large box upstairs, and are horrified by its contents. They are then attacked by an unseen assailant. Arkin O’Brien is an ex-convict working as a handyman. His latest customers are the Chase family. He is generally well-liked by the Chases, particularly their younger daughter Hannah. While working at the Chase home, Arkin notices several strange insects around the house. After work, Arkin meets his wife, whose debt to several loan sharks is due by midnight. In order to protect her and their daughter, Arkin plans a heist at the Chase home, which houses a valuable ruby. He breaks in, but as he attempts to crack the safe, a masked figure enters in the house and locks the door. Michael, the father, appears injured, and attempts to attack Arkin with a golf club, thinking Arkin is the perpetrator. However, Michael is incapacitated by a trap rigged with the club, and the masked man drags Michael into the basement. Arkin attempts to call 911, but the phone is rigged with another trap, and the windows have been boarded up and lined with razors, making escape impossible.Arkin retreats to the basement; Michael informs him that his wife Victoria is trapped as well, his older daughter Jill is out, and Hannah is hiding somewhere, and that a gun is in the safe, giving him the combination. Arkin then finds a captive Victoria and has her distract the intruder while he goes upstairs to get to the safe. Upon opening the safe, Arkin gets the gun (which has no bullets) and pockets the ruby. While searching for Hannah, he finds the same box from the beginning of the film. Hearing noises coming from the box, he opens it to find a bloodied Larry, who explains that the masked man is a “collector” of people; he only collects one person in a household and kills everyone else like he did to his wife. For the people he does not collect, he brutally tortures them until death. Horrified, Arkin unsuccessfully tries to escape, while the Collector locks Larry back in the trunk.

Arkin goes back downstairs and discovers Michael dead. He goes to Victoria, who had been tortured, and frees her. They try to escape the basement, but after Victoria notices Michael’s corpse, she panics and runs into the Collector, who stabs her multiple times, injuring her, and throws her back downstairs. Shortly after, Jill arrives home with her boyfriend Chad. As the two prepare to have sex on the kitchen table, they notice the Collector watching them. Chad attacks him but is killed when he is pushed into a room filled with several bear traps. Jill is captured, but she manages to make a 911 call before being taken. Using an alarm clock as a distraction, Arkin frees Jill, but she doesn’t trust him and is killed by a trap when she reaches for a pair of scissors. Arkin eventually decides to escape the house, but in the process, he sees Hannah in the window with the Collector coming her way. Refusing to leave her behind, he reenters the house and prepares a trap to kill the Collector with Hannah.

However, the Collector uses Larry as a decoy, so the trap kills Larry instead. Arkin then sends Hannah down a laundry chute to the basement where she hides. Before Arkin can go down the chute, the Collector attacks and knocks out Arkin. The Collector then takes Arkin captive and brutally tortures him. A police officer responding to Jill’s 911 call tries to arrest the Collector and is killed by the Collector’s dog, but manages to call for backup before dying. The distraction gives Arkin time to free himself, but he discovers Victoria dead and armed explosives in the basement. After killing the Collector’s dog with a flaming bucket and trapping the Collector in one of his own traps, Arkin finally escapes with Hannah. Arkin, seeing several approaching police cars, runs into the road to get their attention but is accidentally hit by one of the cars. While lying injured in the road he sees Hannah being scooped to safety by one of the policeman. An injured Arkin tells a police officer that the Collector was an exterminator also working at the Chase house. The explosives promptly detonate and destroy the house, but the Collector is seen running away from the house unharmed.

While Arkin is being taken to the hospital in an ambulance, he discovers that the ruby is still in his pocket. He begs the paramedic to call his wife, but before he can, something unknown suddenly slams into the ambulance, flipping it over. The ambulance doors swing open revealing the Collector, who had escaped from the burning house undetected. After murdering the injured paramedic, he then kidnaps Arkin by dragging him out of the overturned ambulance and locking him in the box before driving away in his van. In a post-credits scene, the Collector is sitting on the box while watching film slides. Inside, Arkin is heard screaming that he will kill him once he gets out; the Collector then kicks the box to shut him up.

There are some suspension of disbelief flaws in the film, but I enjoyed the ride too much to really mind in this case. It’s a mean horror film that is strong on mood and takes itself seriously. 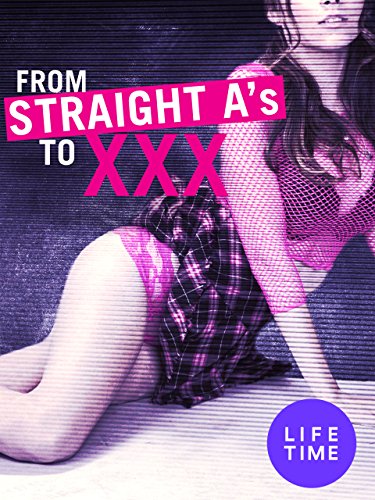 When a change of circumstances leaves Miriam unable to pay her college tuition, she makes a surprising decision: to start performing in adult films, using the pseudonym Belle Knox. Miriam lies to her family and her friends at school, keeping her double life a secret. But soon rumours spread and Miriam becomes the subject of vicious online attacks and unwanted attention. Miriam fights back: she talks to the media, saying her new line of work empowers her as a feminist. But her confident stand has unintended consequences. Miriam is shunned by her conservative family and her colleagues in the adult film world. One impulsive decision has quickly spiralled out of control – and Miriam’s problems are just beginning.

Politics was a big theme from topics such as feminism and empowerment as well as issues affecting many young Americans today such as expensive college tuition fees are brought up.In addition to that,the audience is provided something that would allow them to give a thought to various themes such as Politics, society, pornography, feminism,morality and the ideals of today’s young women.

Also included are college experiences of cyberbullying,the rape culture and harassment that are common in today’s college and universities.Finally,it also would divide the audience in terms on how they view Miriam/Belle in terms of the choices and decisions she has made.