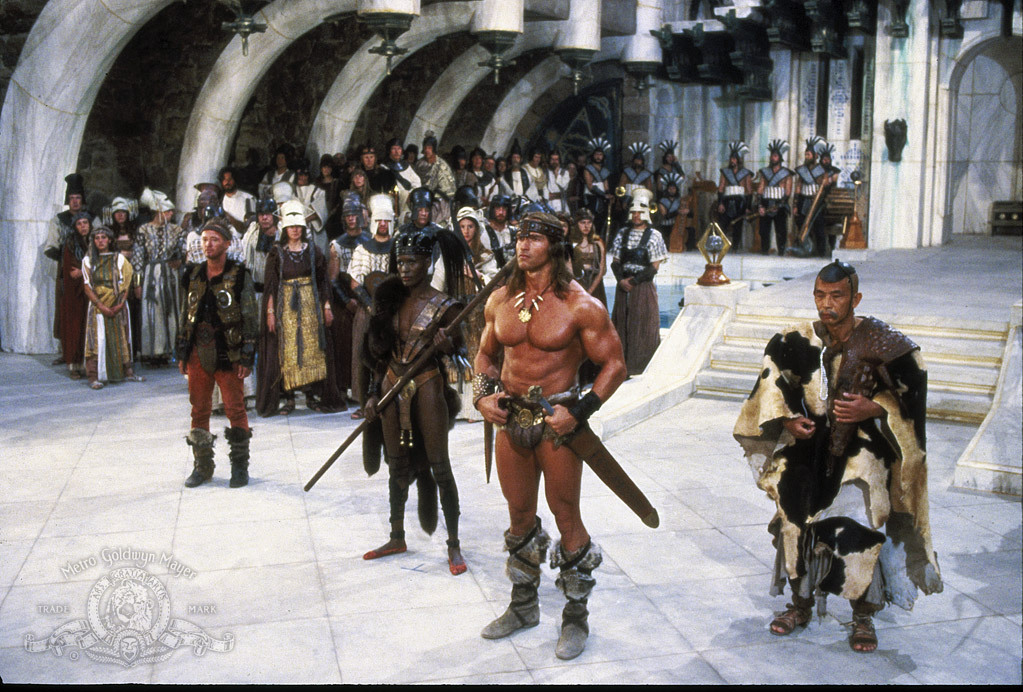 Conan (Arnold Schwarzenegger) and his companion, the thief Malak (Tracey Walter), are confronted by Queen Taramis (Sarah Douglas) of Shadizar. She tests their combat ability with several of her guards. Satisfied, she tells Conan that she has a quest for him. He refuses her, but when she promises to resurrect his lost love, Valeria, Conan agrees to the quest. He is to escort the Queen’s niece, Jehnna (Olivia d’Abo), an innocent who is destined to restore the jeweled horn of the dreaming god Dagoth; a magic gem must first be retrieved that will locate the horn. Conan and Malak are joined by Bombaata (Wilt Chamberlain), the eunuch captain of Taramis’s guard. Bombaata has secret orders to kill Conan once the gem is obtained.

Because the gem is secured in the fortress of a powerful wizard, Conan seeks the help of his friend, Akiro (Mako), the Wizard of the Mounds. Akiro has been captured by a tribe of cannibals, and must first be rescued. Afterward, the adventurers encounter Zula (Grace Jones), a powerful bandit warrior being tortured by vengeful villagers. Freeing Zula at Jehnna’s request, Conan accepts the indebted warrior’s offer to join their quest.

The adventurers travel to the castle of Toth-Amon (Pat Roach) where the gem is located. As they camp for the night, the wizard takes the form of a giant bird and kidnaps Jehnna. The others wake in time to see the bird enter the castle. Sneaking in through a water gate, they search the castle, but Conan is separated from the group and the others are forced to watch him battle a fierce man-beast. Conan mortally wounds the creature, which is revealed as another form of Toth-Amon. With the wizard’s death, the castle begins to disintegrate, forcing the group’s hasty retreat. They are ambushed by Taramis’s guards, but drive them off. Bombaata feigns ignorance about the attack. The gem reveals the location of the jeweled horn. Jehnna expresses romantic interest in Conan, but he rebuffs her and declares his devotion to Valeria.

They reach an ancient temple where the horn is secured. Jehnna obtains it while Akiro deciphers engravings. He learns that Jehnna will be ritually sacrificed to awaken Dagoth. They are attacked by the priests who guard the horn. A secret exit is revealed, but Bombaata blocks the others’ escape and seizes Jehnna. Despite this treachery, Conan and his allies escape the priests and trek to Shadizar to rescue Jehnna. Malak shows them a secret route to the throne room. Conan confronts Bombaata and kills him in combat. Zula impales the Grand Vizier (Jeff Corey) before he can sacrifice Jehnna. Because Bombaata and the Vizier were “impure sacrifices”, the rising Dagoth (André the Giant) becomes distorted from a beautiful human form into a monstrous entity. Dagoth kills Taramis, then attacks Conan. Zula and Malak join the fight, but are effortlessly swept aside by the entity. Grappling with the monster, Conan tears out Dagoth’s horn, weakening the creature enough to kill him.

Afterward, the newly crowned Queen Jehnna offers each of her companions a place in her new court: Zula will be the new captain of the guard, Akiro the queen’s advisor, and Malak the court jester. Jehnna offers Conan marriage and the opportunity to rule the kingdom with her, but he declines and departs to find further adventures and his own place in the world.Excellent picture on blu ray very very good if your a fan of arnie then buy it anyway you wont be disappointed with this blu ray!