Launched in 1994 as part of Marvel’s Action Hour in the USA (alongside Iron Man), this then new cartoon attempted to bring Marvel’s First Family  to the attention of a new generation. The main US comic book of the time included a free ‘animation cel’ with #394 to promote the series and later a spin off comic book of the cartoon was launched. In its first season, the show is disappointing. Reduced to a crude sitcom, the show is creaky, toe curling and cheesy beyond belief.  Worst of all, Sue Richards is reduced to mere ‘damsel in distress’ for the entirety of the season, functioning only as a simpering wife and mother to the men on the team. Compared to the superior Batman: The Animated Series of the time and even Marvel’s other cartoons of the period Spider-man, X-Men and Iron Man, its not hard to feel disappointed with the translation of the Fantastic Four to the small screen. 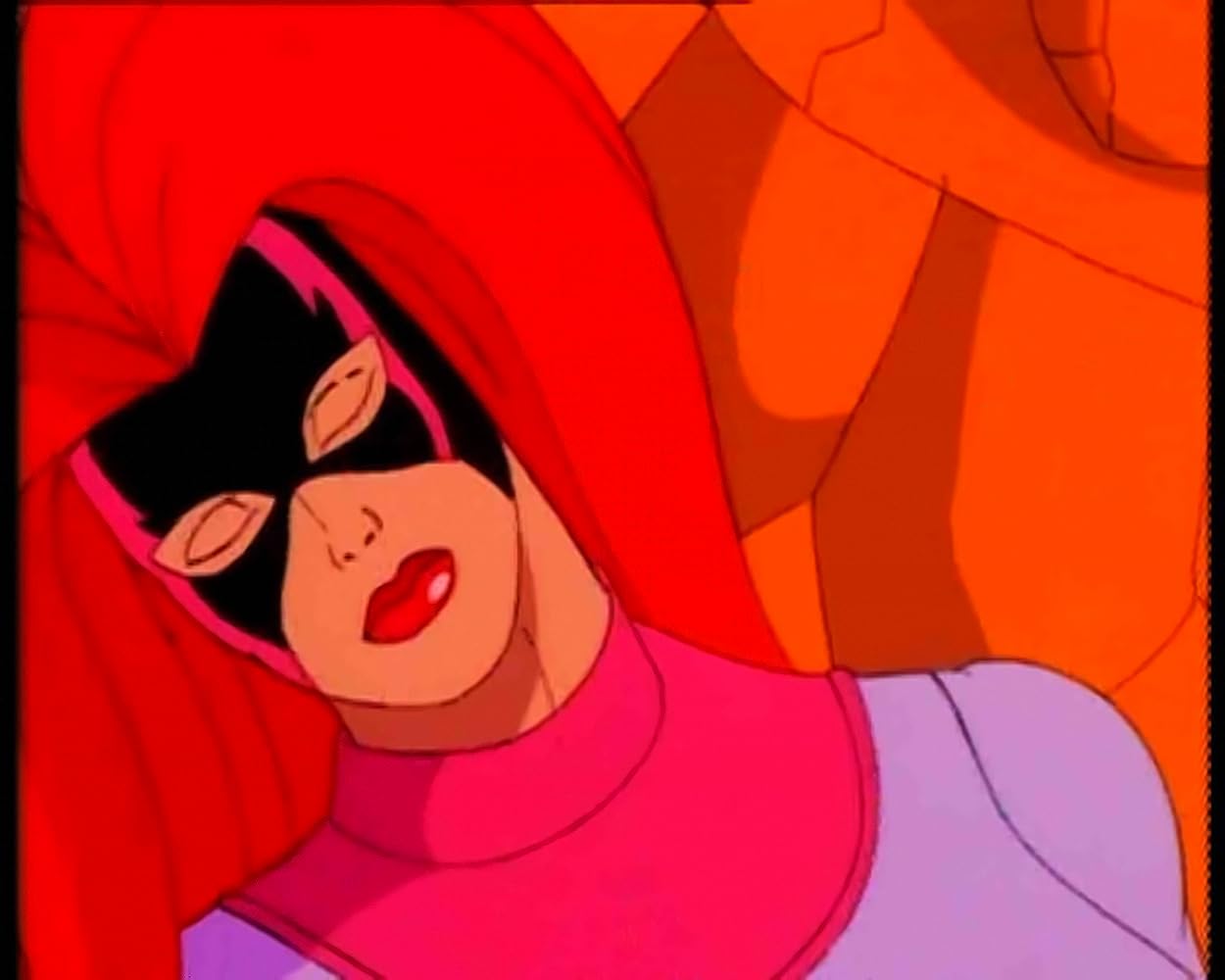 Thankfully, the approach of Season One , with its comedy landlord and irksome stereotypes don’t seemed to have found favour with audiences either and the show was given a serious overhaul for Season Two. The improvement in storytelling is immense and does a much better job of servicing the characters and situations they find thermselves in. The theme tune and accompanying score are still pretty naff though, all synthesized fanfares and flat sounding parps.

The Inhumans three parter is my favourite, giving all its key characters a chance to shine and the romance between Johnny Storm and Crystal is nicely done, There’s also some neat guest appearances for The Avengers, Black Panther and even Ego – The Living Planet. As with all of Clear Vision’s Marvel releases, the set is attractively packaged with some nice artwork by Simon Williams and the picture is pin sharp and vibrant. The sound is superb as well, being dolby 5.1 stereo. There’s nothing in the way of any extras though, just the usual language and episode selections. 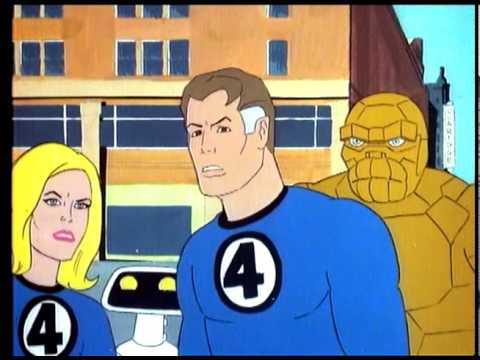 Through no fault of DePatie-Freleng, the character of the Human Torch couldn’t be included in this series because he’d already been optioned for a film project which, at the time, didn’t come to fruition. Instead, marvel legend Stan Lee created Herbie the Robot, voiced by the multi-talented Frank Welker, Megatron in the original Transformers. Although some fans reacted badly to the new character, for those who were just small children at the time, Herbie was perfect for us. His longevity has since been assured in Marvel Comics where he now serves as a sidekick to Franklin Richards, son of Mr & Mrs Fantastic.

As a small child many years ago, this series was a great introduction for me to the World of Marvel Comics. Guest characters include Magneto, Blastarr, Doctor Doom, The Inhumans, and Skrulls to name but a few. The stories and characters have an innocence about them which is missing from modern television, and the emphasis is always on fun… even when Herbie and Ben are squabbling the way best friends tend to.

And if the cell-animation seems simple and basic by today’s standards, where cgi seems to rule the roost, then let us not forget that DePatie-Freleng actually helped out with the special effects on the original legendary Star wars film.  In short, Fantastic Four (1978) is fantastic for kids… and also for grown-ups who want to remember the good ol’ days!

The Incredible Hulk. Initially aired as three seven-minute segments in the (weekly) animated Marvel Superheroes hour in 1966, this two-disc box set compiles all 39 Hulk episodes into one fantastic collection and provides a fascinating window into the cartoons of old. Lifted directly from the early Marvel comics in which he first appeared, most of what we know and love about the Hulk is already here. Following the classic origin story to a tee, Dr Bruce Banner, missile expert and genius scientist, runs out onto a missile test range to rescue wayward teenager Rick Jones. But in doing so, Banner is caught in a detonation of his own making and blasted with gamma rays. Waking in the infirmary sometime later, Banner feels a change coming on and is soon busting through clothes and turning a darker shade of green.

Created by Stan Lee and Jack Kirby four years earlier, it’s fair to say the character was still in development at this point and, playing more into the monster myth on which the Hulk was originally based, Banner’s transformations are initially triggered more by the sun going down rather than losing control of his emotions. Nevertheless, all the other character traits we associate with the green-skinned one are here – the lack of intelligence, the uncontrollable rage, and the complete disregard for his or anyone else’s safety (with the exception of constant love interest Betty Ross). Other familiar faces play their part, General ‘Thunderbolt’ Ross, Betty’s father, continues his life-long mission to capture and control Banner’s monster, while other Marvel characters, including Iron Man, Thor, The Wasp and Captain America, also make a guest appearance as The Avengers. It’s a shame The Avengers don’t feature more heavily, although a few of them do return individually in later episodes. That being said, this is Hulk’s show and it’s only right that he takes the starring role, and that he does.

And it’s not just the Marvel heroes who turn up, classic villains like the Gorgon, Leader and the Metal Master also take their respective turns as enemies of the Hulk and do their best to enrage the muscle-bound giant. Each of the villain’s are brilliantly voiced, lovingly drawn and serve as suitable adversaries for the Hulk, doing their best to either thwart, capture or kill our favorite beast. Another character to feature heavily, and of some annoyance, is the already mentioned Rick Jones, the Hulk’s guilt-ridden sidekick who blames himself for Banner getting caught in the radiation blast. And while, at first, Rick seems a welcome addition to the Hulk origin story, he soon begins to grate and becomes something of a boy wonder, and proves just as annoying. That aside, the characters, friend and foe alike, really make the journey from page to screen and make these episodes all the more enjoyable for being there. And at only seven minutes long, each episode is easy to watch and doesn’t ask too much of the viewer in terms of investment and commitment, making the stories easy to follow and extremely watchable.

It’s also worth mentioning that while these episodes will hold fond memories for most Marvel fans, the series has received criticism in the past for it’s almost entirely static animation, save for the movement of mouths, eyes and the occasional arm or leg. But such criticism is unfair and unwarranted, especially when you consider the limitations of the time and the quick turnaround required for the weekly episodes. It goes without saying that, when compared to the animation standards of today, that the artwork here seems crude and almost basic, but again it was fitting with the times and served as an accurate representation of what many consider to be Marvel’s Silver Age of comics. So accurate, in fact, that the artwork was directly lifted from the comic books themselves and, through a process known as xerography, printed directly onto the animation cells. This process allowed for the series to act as something of a showcase for the wonderfully nostalgic artwork of Jack Kirby, Steve Ditko and Don Heck, Marvel luminaries themselves and just as deserving of our adoration as Stan the Man himself.