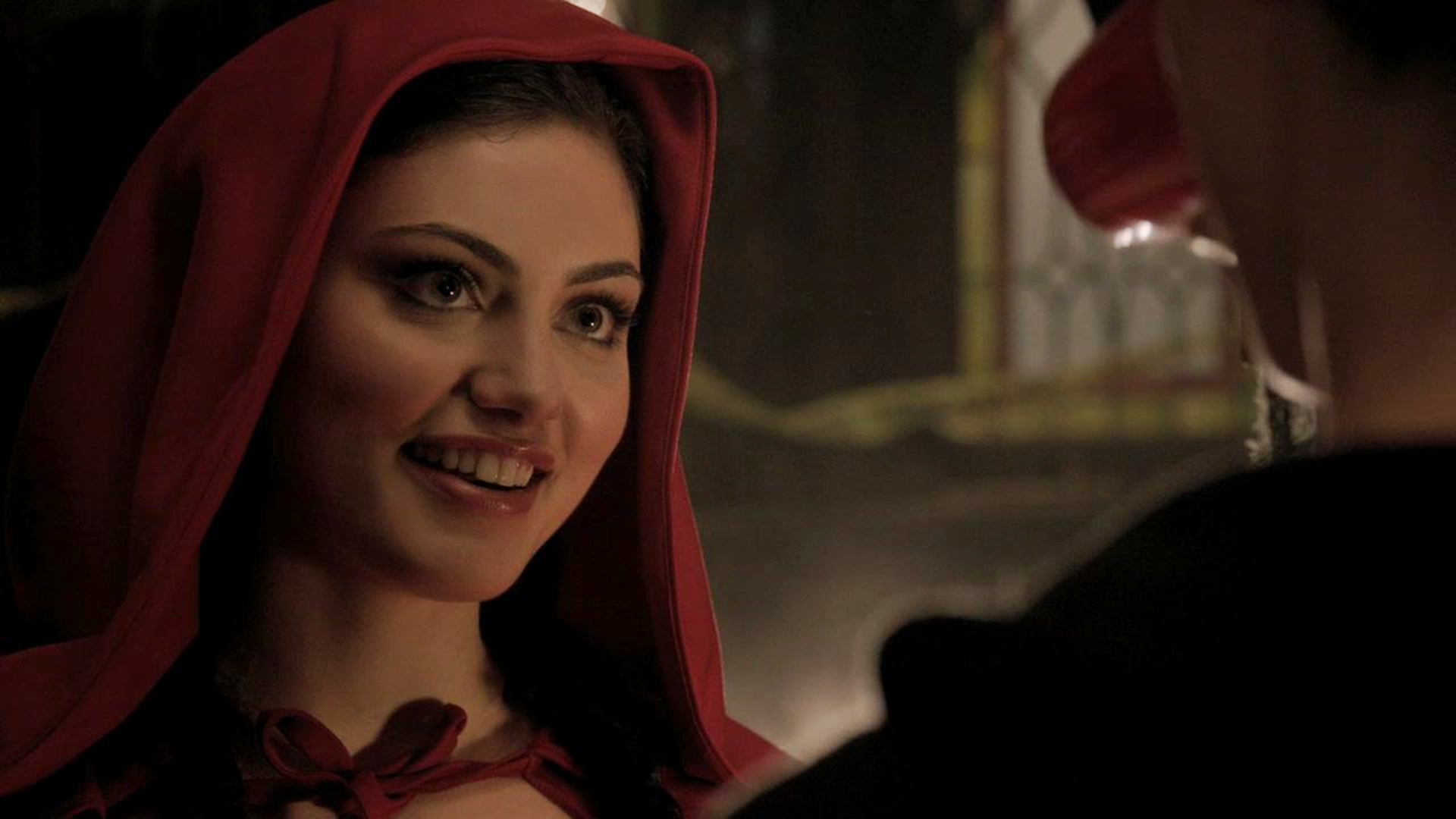 As Grandma Jane plans to head up to Henry’s cabin for the weekend, Faye convinces Cassie to throw a big Halloween party for the Circle. The pair rummage through an antiques store looking for decoration ideas, but odd things happen when Cassie pays the owner of the store. Jane confirms that Calvin is a witch, and she says there were more magical families in Chance Harbor before the fire. Meanwhile, Melissa is still mourning at Nick’s grave, and she and Jake exchange heated words. 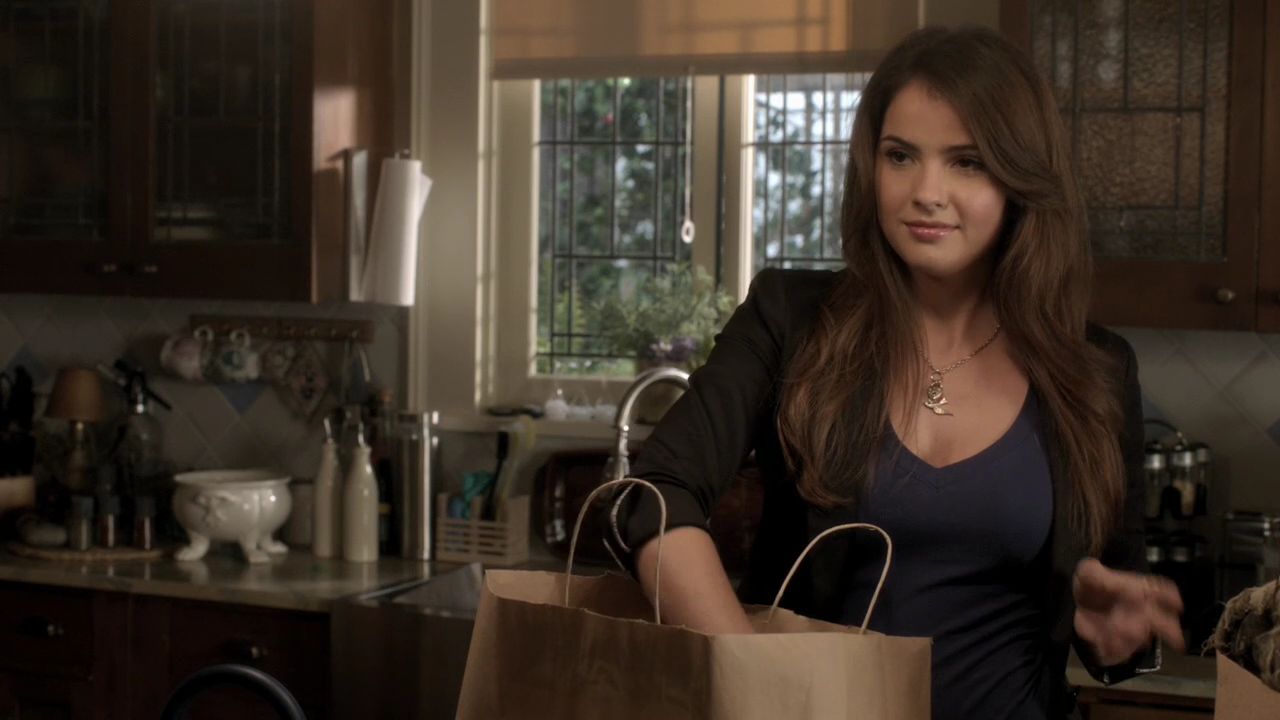 Back at the house, Cassie discovers a piece of the dagger that Simone used to try to kill her. She wonders if Calvin will know anything about the strange symbols on the blade, so she plans on going back to the shop. Jake magically sabotages her car and then pays a visit to Calvin himself. He warns the shopkeeper off from telling Cassie the truth and then concocts a potion which will permanently kill a witch. All he needs to do is set the potion alight, and Calvin will be dead. Once Cassie gets to the shop, Calvin doesn’t tell her a thing. Cassie spots another weapon in the shop with similar markings so she takes a pic of it. 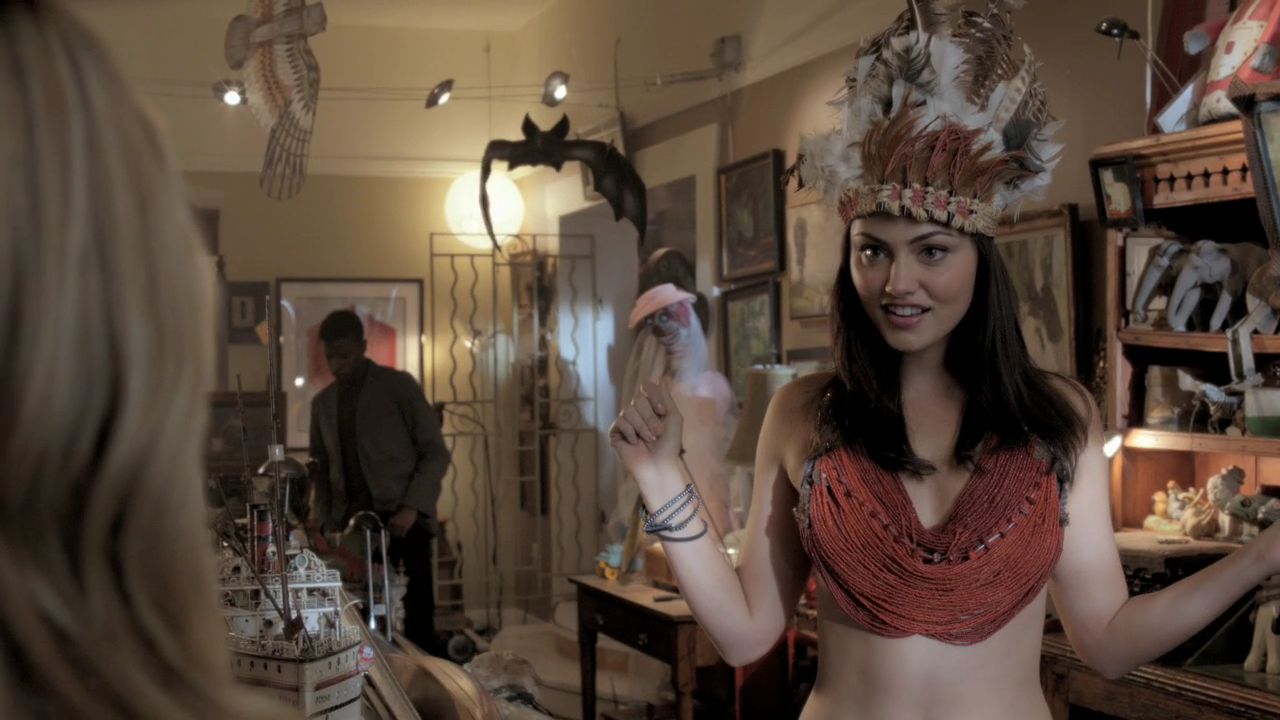 Later she, Adam, and Faye research the symbols online, and discover that they belong to an organization of witch-hunters. Jake is seen making the same killing potion for everyone in the Circle. He will have some help kidnapping the witches at the party. One of his fellow hunter is Luke.

Jake and Cassie talk, and Cassie expresses her concern about the witch-hunter symbols she saw on the blade. Jake shows more knowledge of those symbols than he should. Cassie grows a bit suspicious of him. Meanwhile, Adam and Diana are still pining for each other, and Adam is angry at his dad for encouraging the break-up. Ethan shrugs it off, saying you can’t fight destiny.  At the party, Faye and Jake flirt, but members of the Circle are being picked off one by one. Melissa is taken away first. Cassie slips away from the party for a moment to head next door to rummage through Jake’s family’s house. She finds a witch-hunter knife in Jake’s things. Jake arrives and says that the knife was Nick’s. Calvin and Ethan talk about Cassie’s father, and whether she should know the whole truth about her dad. Calvin has a change of heart and contacts Cassie to warn her about the witch hunt and about Cassie’s special abilities. Before he can say too much, however, Jake sets fire to Calvin’s potion and kills him.

At the party, Adam is still trying to get Diana back but she’s still refusing to say yes. Diana goes off alone and is taken by the witch-hunters. Cassie is finally taken, by Luke. The Circle are all gathered together, and Jake arrives to tell the other hunters that Cassie’s powers are special and she won’t be killed by normal means. The hunters ignore his warning, which is a big mistake, as Cassie sets Luke on fire. Jake cuts his arm open and pretends that he was one of the hunted as well. Jake tries to distract Cassie from the night’s events by visiting her. However, Cassie sees that someone has mailed a scroll to her. Calvin’s last act was to help Cassie. Meanwhile, Jane arrives at Henry’s cabin, and finds him dead. She searches his home for his crystal in the hopes of reviving him, but then someone knocks her unconscious – it’s Charles, who stole the Crystal.

Overall, The Secret Circle comes off as a fun teen-angst program that successfully utilizes its inherent appeal to the core demographic, without alienating anyone else that might be casually tuning in. It was a huge hit but then the CW decided to cancel it, and didn’t even release a DVD of it.

Emily (Leisha Hailey) and Nate Weaver (Gale Harold) are a happily married couple living in New York. Nate is a recognized artist, Emily a fashion designer, and the two are expecting their first child. Emily suffers a terrible miscarriage during a dinner party and she is informed that the scarring left on her womb means she will never be able to conceive again. To give them both a fresh start, Nate and Emily move out into the countryside to Nate’s family home, which has been uninhabited for some time. At first enchanted by it, Emily is horrified when a skeleton is discovered on the property, but it is obvious that the body is very old, so no danger can be attached to the house. After Emily discovers an old trunk filled with old baby things in the cellar, she pays a visit to the local Historical Society and is told that the house has a past she and Nate were unaware of. Several suspicious deaths have occurred at the property in the 18th and 19th century, and Nate’s aunt had vanished without a trace when the house was new.

Nate grows distant and cold towards Emily as he starts painting again, acting strangely. Tense and isolated, Emily starts to see visions of a woman covered with blood, and faints. After seeing the doctor, who thinks she is suffering from trauma, she gets a phone call to tell her that she is actually pregnant. Ordered to spend the bulk of her pregnancy in bed resting due to the high risk of miscarriage, Emily starts to get bored and frustrated by Nate, who is working longer and longer hours and seems uninterested in her or the coming baby. Emily’s visions continue; she organizes a party for her city friends to rid herself of the loneliness. At the party, she believes that Nate’s agent is having an affair with him. Later, the agent somehow falls through the window of Emily’s studio and is hospitalized. Nate thinks Emily may have pushed her as he saw her walk away from the window after the woman fell. When Nate is informed that his agent has died, he storms out angrily. Emily reads through a folder of press cuttings left by the Historical Society and discovers that all the women who died at the house were killed by their husbands. Every woman had been pregnant at the time; supposedly, the house “changed” their husbands and turned them evil. Emily has another vision of the dead woman and believes that Nate is coming back to kill her. She calls her best friend, who tells her that she will come and pick her up. Terrified, Emily hides in her bedroom with a knife when she hears Nate come back into the house. She tries to stab him with the knife but instead stabs her friend—who had driven back with Nate. Emily climbs up onto the roof to save herself. She believes she is fighting one of the ghosts of the house; they fall from the roof and she stabs him repeatedly. After killing him, Emily realizes she has actually killed Nate. At the hospital, a scan reveals that Emily is not pregnant although she believes she is. The doctor’s phone call, Nate acting strange, and the ghostly visions were all in her head: symptoms of psychosis. Emily is left in a padded room, rocking her imaginary child in her arms.

Fertile Ground certainly doesn’t try to be masterpiece, most of the cast is unknown, but the suspense, mystery and fright it brings compensates for it. I really enjoyed watching it from start to finish, doesn’t give a conclusive ending but at a sad one to say the least. 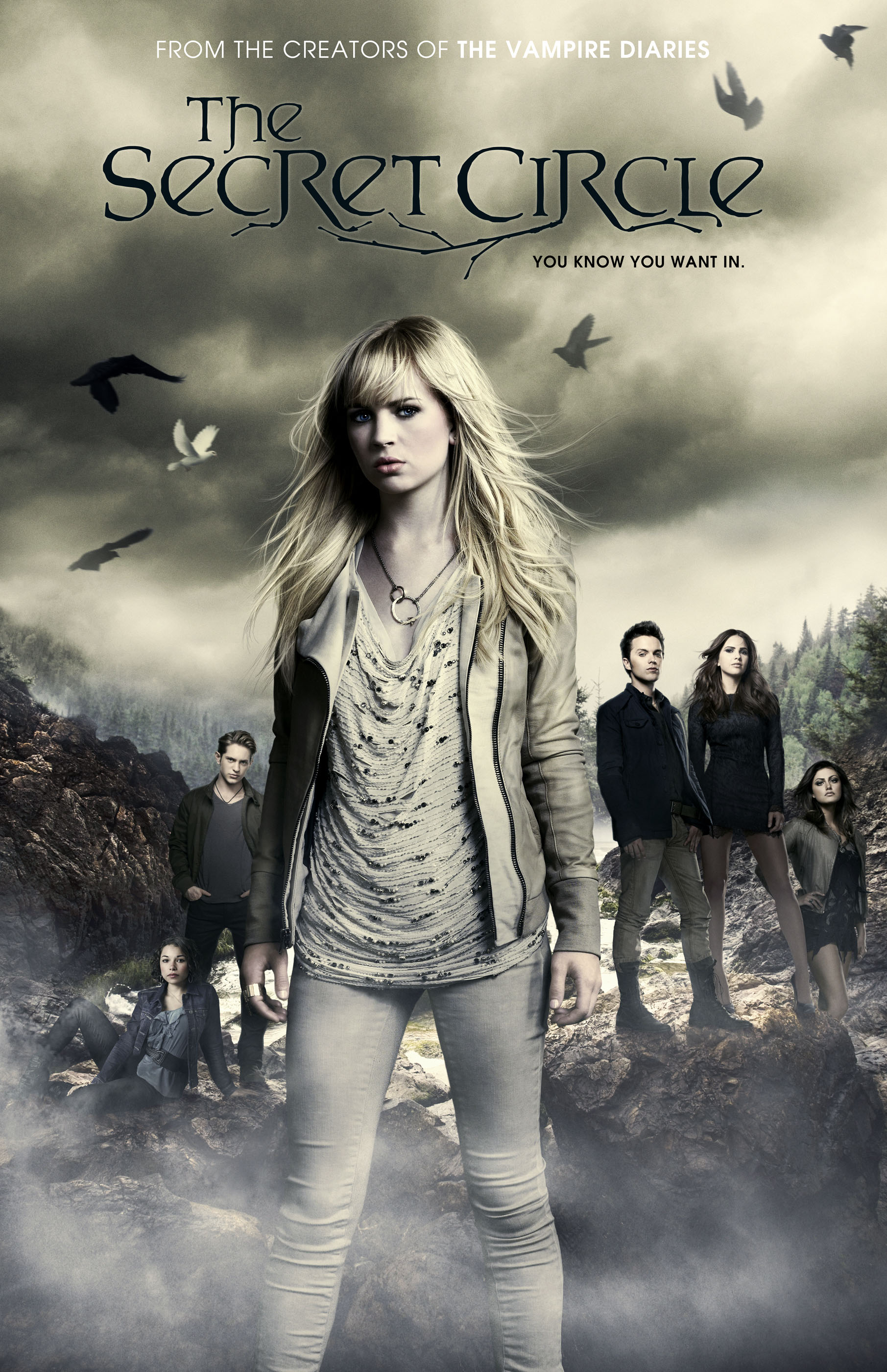 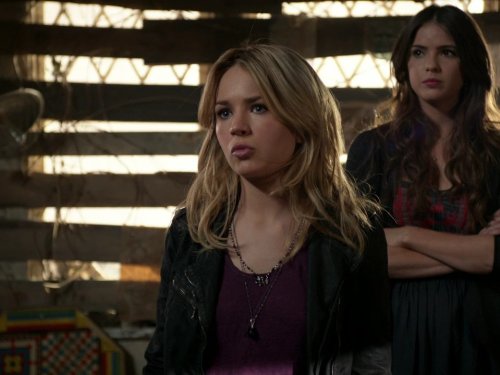 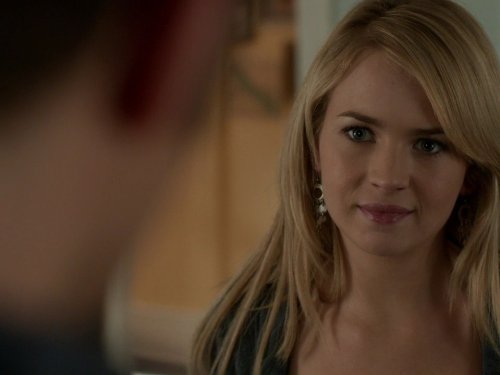 Following the death of her mother, Cassie Blake (Britt Robertson) moves to Chance Harbor, Washington, to live with her grandmother. Her attempts to adjust to the new town are crushed when five of her classmates, Adam Conant (Thomas Dekker), Diana Meade (Shelley Hennig), Faye Chamberlain (Phoebe Tonkin), Melissa Glaser (Jessica Parker Kennedy), and Nick Armstrong (Louis Hunter), reveal to Cassie that she comes from a long line of witches and is the final member of their coven; with her they are able to unlock the full extent of their powers. Initially Cassie refuses to believe that she is a witch, even after Adam helps her to unlock her powers. It is only after she discovers an old leather-bound book of spells left to her by her late mother, Amelia, that Cassie begins to accept her power. Inside the book is a message to Cassie explaining that she kept their real family history and her powers a secret in order to keep her safe; as the circle soon finds out, their powers attract dark and dangerous forces that constantly puts them in harm’s way.

Unfortunately for the would-be coven, Cassie’s presence may have come too late. The group’s bond is already breaking due to a conflict between the well-intentioned Diana and wild-child-in-the-making Faye (Phoebe Tonkin), who, after setting Cassie’s car on fire and summoning up a massive storm. 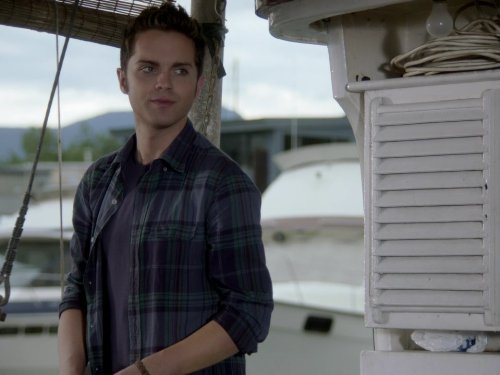 And, as always, teenage hormones add to the overall confusion as Diana’s boyfriend Adam (Thomas Dekker) takes a shine to Cassie – making an ill-advised pass at her while in the midst of making some water droplets float in air. However, all of this is small potatoes as the The Secret Circle’s real big bads are revealed to be many of the teen witches’ parents – headed up by Diana’s father Charles (Gale Harold) and Faye’s mother/high school principal Dawn Chamberlain (Natasha Henstridge).Overall, The Secret Circle comes off as a fun teen-angst program that successfully utilizes its inherent appeal to the core demographic, without alienating anyone else that might be casually tuning in. It was a huge hit but then the CW decided to cancel it, and didn’t even release a DVD of it.