In the present day, scientists in the Arctic uncover an old, frozen aircraft. In March 1942, Nazi officer Johann Schmidt and his men steal a mysterious relic called the Tesseract, which possesses untold powers, from the town of Tønsberg in German-occupied Norway.

In New York City, Steve Rogers is rejected for World War II military recruitment because of various health and physical problems. While attending an exhibition of future technologies with his friend, Sgt. James “Bucky” Barnes, Rogers again attempts to enlist. Overhearing Rogers’ conversation with Barnes about wanting to help in the war, Dr. Abraham Erskine allows Rogers to enlist. He is recruited into the Strategic Scientific Reserve as part of a “super-soldier” experiment under Erskine, Col. Chester Phillips, and British agent Peggy Carter. Phillips is unconvinced by Erskine’s claims that Rogers is the right person for the procedure but relents after seeing Rogers commit an act of self-sacrificing bravery. The night before the treatment, Erskine reveals to Rogers that Schmidt underwent an imperfect version of the procedure and suffered permanent side-effects.

Schmidt and Dr. Arnim Zola harness the energies of the Tesseract, intending to use the power to fuel Zola’s inventions, mounting an offensive that will change the world. Schmidt discovers Erskine’s location and dispatches assassin Heinz Kruger to kill him. Erskine subjects Rogers to the super-soldier treatment, injecting him with a special serum and dosing him with “vita-rays”. After Rogers emerges from the experiment taller and more muscular, an undercover Kruger kills Erskine and flees. Rogers pursues and captures Kruger, but the assassin avoids interrogation by committing suicide with a cyanide capsule. With Erskine dead and his super-soldier formula lost, U.S. Senator Brandt has Rogers tour the nation in a colorful costume as “Captain America” to promote war bonds while scientists study him and attempt to rediscover the formula. In 1943, while on tour in Italy performing for active servicemen, Rogers learns that Barnes’ unit was MIA in a battle against Schmidt’s forces. Refusing to believe that Barnes is dead, Rogers has Carter and engineer Howard Stark fly him behind enemy lines to mount a solo rescue attempt. Rogers infiltrates the fortress of Schmidt’s Nazi division Hydra, freeing Barnes and the other prisoners. Rogers confronts Schmidt, who removes a mask to reveal a red, skull-like visage that earned him the sobriquet “the Red Skull”. Schmidt escapes and Rogers returns to base with the freed soldiers.

Rogers recruits Barnes, Dum Dum Dugan, Gabe Jones, Jim Morita, James Montgomery Falsworth, and Jacques Dernier to attack other known Hydra bases. Stark outfits Rogers with advanced equipment, most notably a circular shield made of vibranium, a rare, nearly indestructible metal. Rogers and his team sabotage various Hydra operations. The team later assaults a train carrying Zola. Rogers and Jones succeed in capturing Zola, but Barnes falls from the train to his assumed death.[c] Using information extracted from Zola, the final Hydra stronghold is located, and Rogers leads an attack to stop Schmidt from using weapons of mass destruction on major cities around the world. Rogers climbs aboard Schmidt’s aircraft as it takes off, and during the subsequent fight the Tesseract’s container is damaged. Schmidt physically handles the Tesseract, causing him to dissolve in a bright light. The Tesseract burns through the plane and is lost in the ocean. Seeing no way to land the plane without the risk of detonating its weapons, Rogers crashes it in the Arctic. Stark later recovers the Tesseract from the ocean floor but is unable to locate Rogers or the aircraft, presuming him dead.

Rogers awakens in a 1940s-style hospital room. Deducing from an anachronistic radio broadcast that something is wrong, he flees outside and finds himself in present-day Times Square, where S.H.I.E.L.D. director Nick Fury informs him that he has been “asleep” for nearly 70 years. In a post-credits scene, Fury approaches Rogers and proposes a mission with worldwide ramifications.

Overall, I enjoyed the immersion into the era that Captain America: The First Avenger takes you back into. The performances are capable and Johnston’s vision is convincing, and it makes for entertaining viewing. 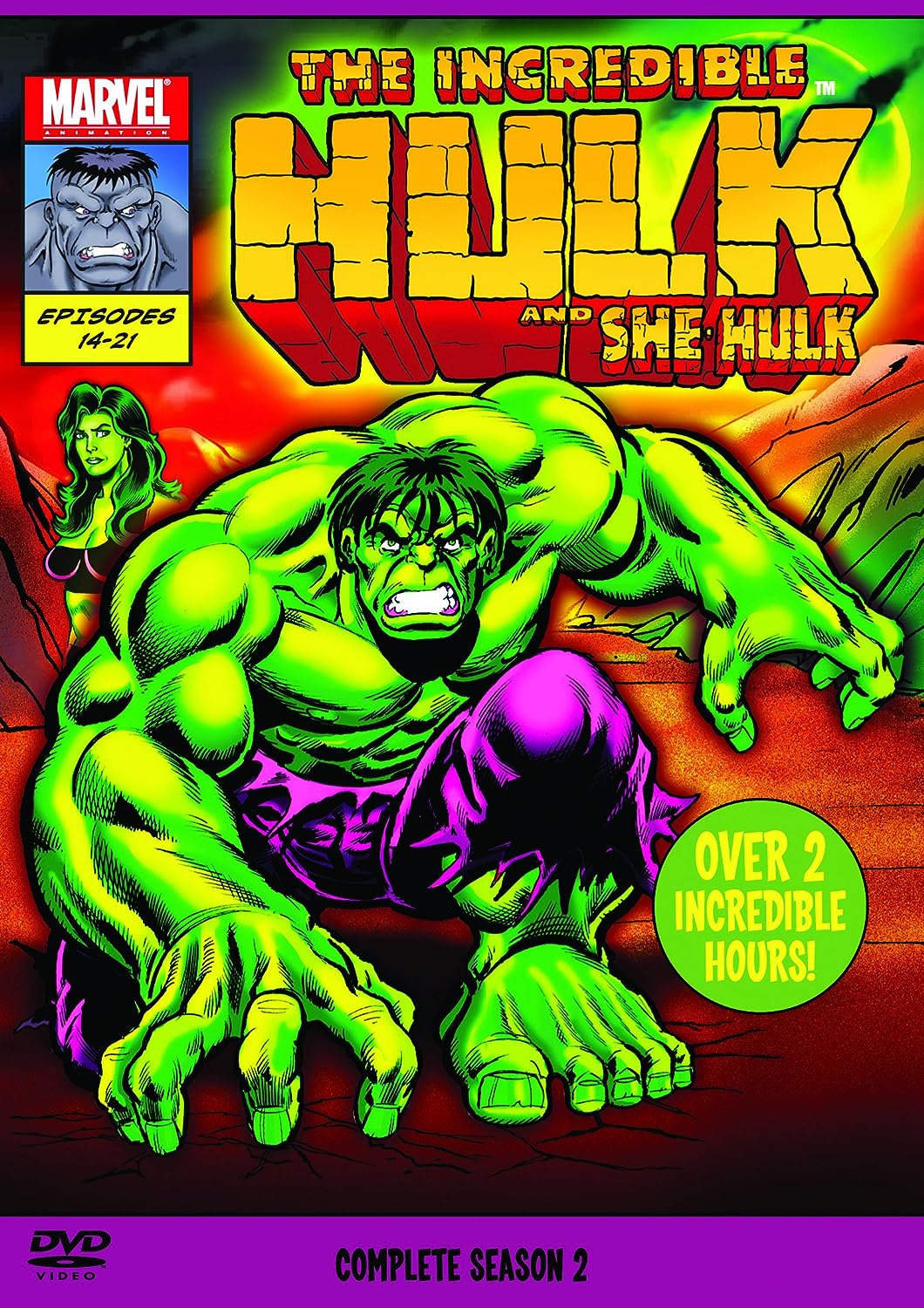 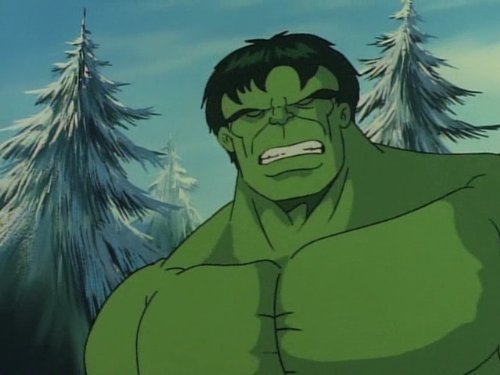 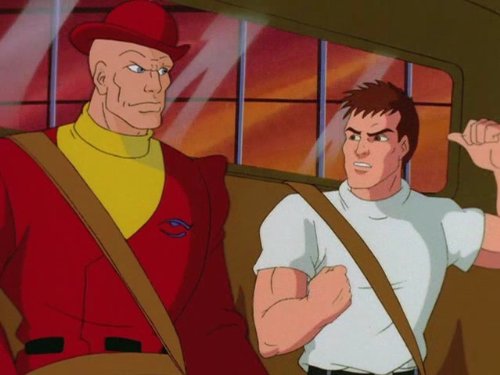 The 1996 Hulk cartoon started off great, the stories remained focused on the green savage Hulk, the army chasing the hulk, and Banner’s relationship with Betty Ross. The art style is pretty good but the animation is jerky which means it has a low frame rate. The 1982 Hulk cartoon had better art and animation. The second season introduced the Grey Hulk and She-Hulk which quickly turned this cartoon to garbage. I never liked the grey Hulk in the comics and I stop buying Hulk comics in the late 1980s because of it. The grey hulk wasn’t savage and talked way too much. The Hulk is supposed to be a brute savage, the extreme opposite of Banner’s personality and to hear the Hulk talk like he has a college education just doesn’t work.

The She-Hulk should have only appeared in one episode. The writers somehow got the impression that the Hulk couldn’t carry a show by himself (even though he carried a comic series by himself for thirty years). So they rename the show “The Hulk and She-Hulk”… big mistake. She-Hulk has the same problem the grey Hulk has, she talks way too much and gets too much screen time. A better idea (maybe) would have been to have a spin off cartoon for She-Hulk. Anyway watch the first season episodes and forget the rest.

The first live-action interpretation of Nick Fury, played by none other than David Hasselhoff. In this 1998 made-for-TV movie, The Hoff stars as the comic-book super spy, alongside soap star Lisa Rinna as Contessa Valentina ‘Val’ de Allegro Fontaine and a cast of relative unknowns. Now, in an effort to capitalize on Jackson’s notable appearance and the current popularity of comic-book properties on the big screen, the first Nick Fury film was released on DVD. There are a few things you should know. Nick Fury: Agent of S.H.I.E.L.D. is not a good film.At times it seems as if the filmmakers knew they didn’t have the talent, schedule or budget to make a quality film, so they took the so-bad-it’s-good approach. Except they never quite got as far as the “good” part. The acting is cringe worthy, the dialogue is laughable, the action scenes are awkwardly choreographed, the plot is unoriginal and little attempt has been made to be faithful to the original comic-book mythology beyond the use of the characters’ names.

For what it’s worth, the story centers on a plot hatched by Andrea von Strucker (aka Viper), the daughter of Nick Fury’s defeated nemesis, Baron Wolfgang von Strucker, described in the film as “last of the great global boogey men.” As the new head of the terrorist organization known as HYDRA, she threatens to launch a deadly biological attack on Manhattan in the form of the Death’s Head Virus, unless she is paid in the sum of $1 billion.

The threat is big enough to bring Nick Fury back into the field after five years of forced retirement. He’s understandably reluctant to return to S.H.I.E.L.D. — which, in this case, stands for the inelegantly named “Supreme Headquarters International Espionage Law Enforcement Division”  until his old flame Val shows up and convinces him of the impending danger posed by von Strucker’s evil spawn. He assembles a task force — including Val, psychic Kate Neville (Tracy Waterhouse) and the eager but untested Agent Pierce (Neil Roberts) — to disarm the missiles containing the virus and to take down Viper before she can escape to do more damage. Don’t let the cover of the DVD fool you. Though this is touted as coming “from one of the writers of Batman Begins” there’s no trace of the realism or tragic darkness of that film. The writer in question is David Goyer, who’s been involved in his share of high-profile genre projects (namely the Blade trilogy). As one of his earlier and less successful efforts, he’d probably be content for this title to remain in obscurity.

Even if the dialogue was stellar, the real problem would be with Hasselhoff’s forced and overly dramatic performance. He’s hopelessly miscast as the hard-as-nails, playing-by-his-own-rules Fury. No matter how much he poses or chomps on cigars with flourish, there’s nothing tough or intimidating about him. As a fighter, he’s slow and stiff in his movements. So much so that it’s distractingly obvious whenever the choreography has been adjusted to compensate for his lack of agility and when a stunt double has been brought in to do it for him. There’s never any danger of the audience taking the character too seriously. But Hasselhoff is not alone in this regard. There’s plenty of atrocious acting in this film that he’s not responsible for, amplified by a mesh of excruciating attempts at various accents, both foreign and American. The worst offender is Sandra Hess as Viper, who takes the character too far into the realm of camp that she actually surpasses Hasselhoff in terms of overacting. In the end, the story’s resolution allows for her return in future adventures. Needless to say, and thankfully,  that’s not going to happen.

The character of Nick Fury has a rich history and a deep back story that may someday make for a good film. But this low-budget, low-quality affair is definitely not it.