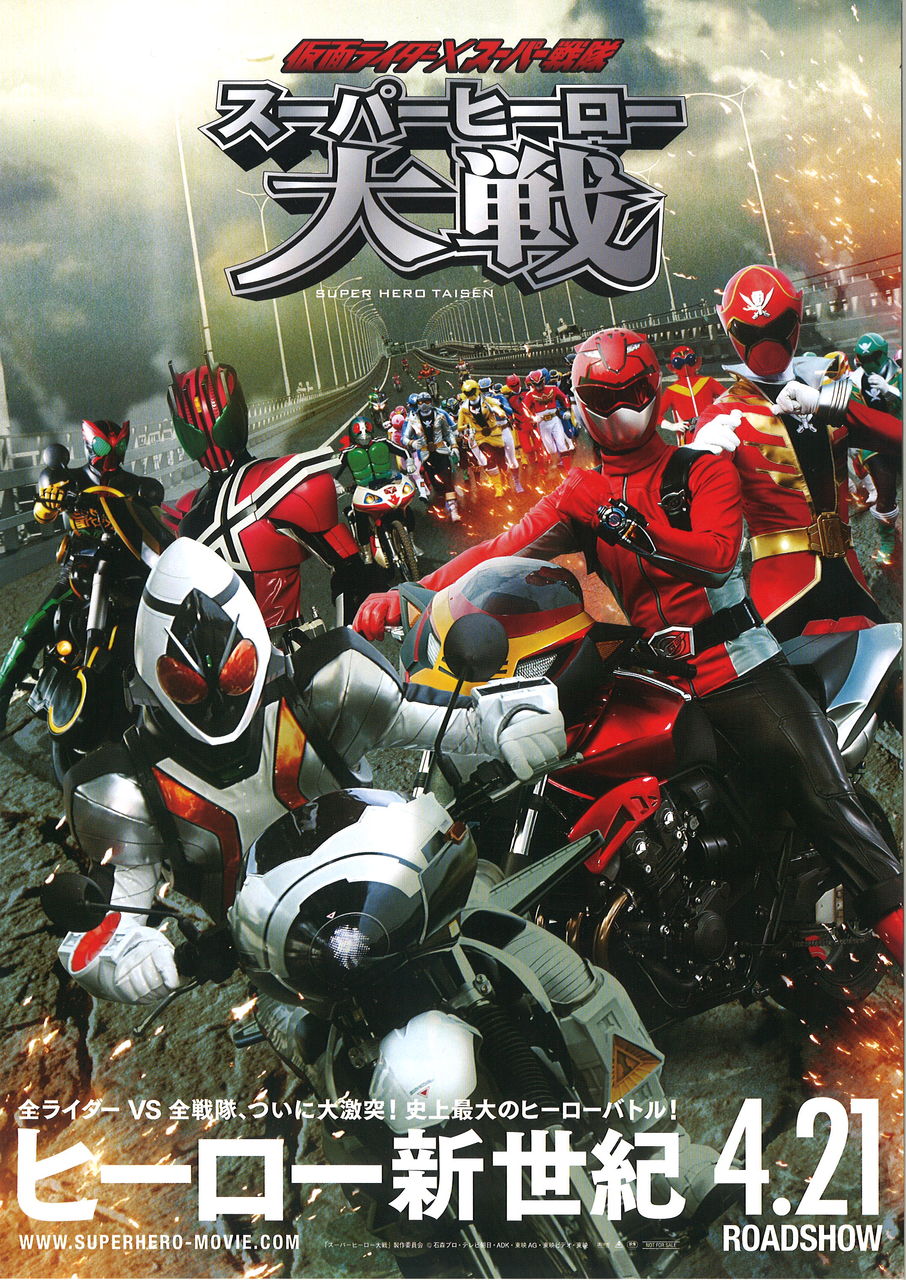 The film begins with Captain Marvelous of the Gokaigers confronting and defeating the Seven Legendary Riders before Tsukasa Kadoya appears before him. While Marvelous swears to him he will not rest before all Kamen Riders are destroyed, Tsukasa claims he will not stop until all Super Sentai are vanquished. While watching Earth from the moon, Kamen Rider Fourze, Yuki Jojima, and Miu Kazashiro see a series of shooting stars that turn out to be a Zangyack fleet. Within moments, Amanogawa High is invaded by Zangyack militants as Gentaro comes to Shun Daimonji’s aid before being blasted away from the Kamen Rider Club to an area where he meets Captain Marvelous. Introducing himself as Kengo Utahoshi and Yuki arrive, Marvelous reveals his intent to kill Gentaro as he transforms into Gokai Red. 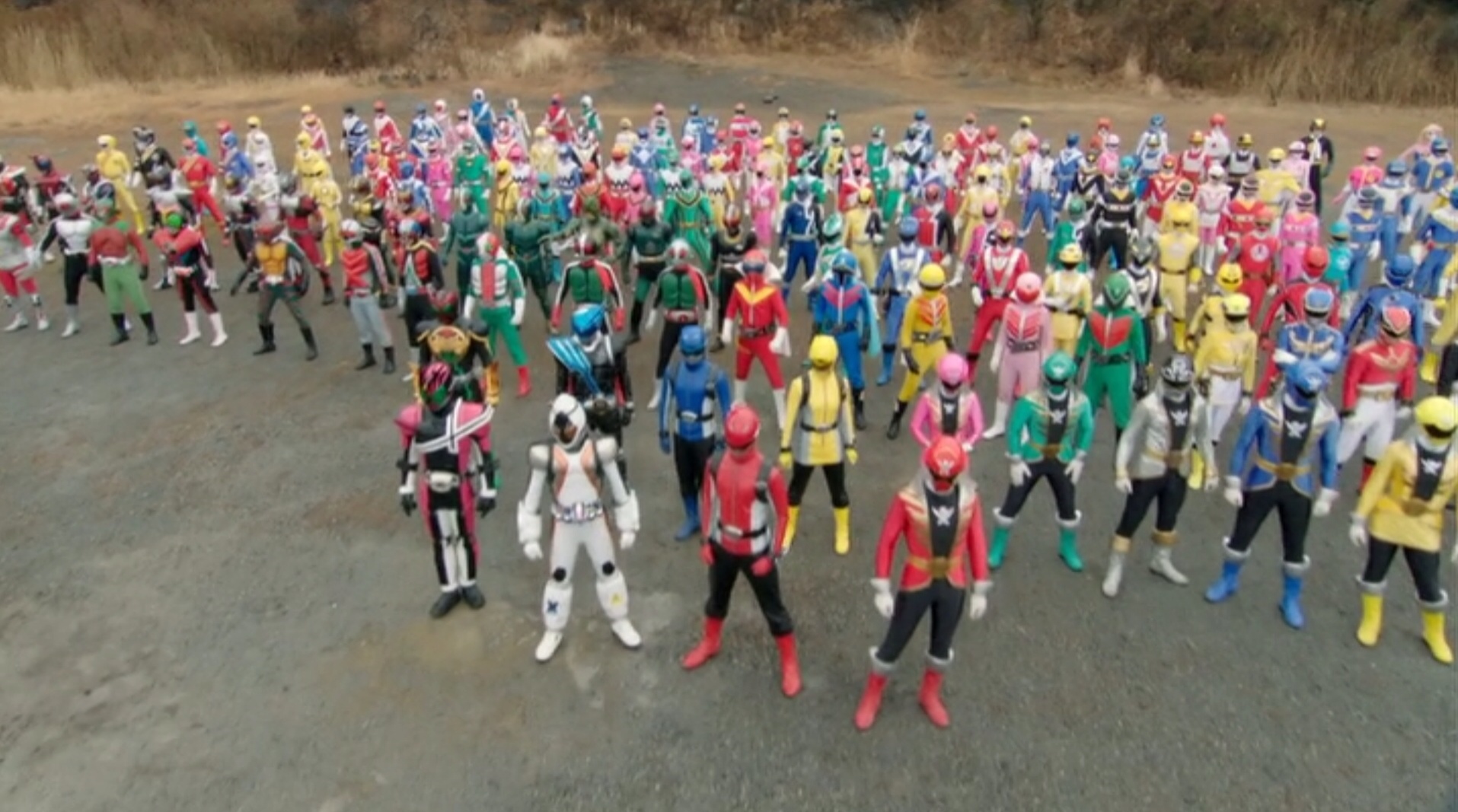 Transforming in response, Kamen Rider Fourze is overpowered by Gokai Red before sicking the soldiers on him. But, the rest of the Gokaiger crew arrive and take out the Zangyack soldiers before they attempt to talk Marvelous out of attacking the Kamen Riders. Marvelous is unconvinced as he summons his new ship, the Gigant Horse, and calls in Warz Gill, Ackdos Gill, Brajira of the Messiah, the Black Cross King, Long, Dagon, the Questers, and Doukoku Chimatsuri. Though Kamen Rider Meteor arrives to lend a hand, Gokai Red retaliates by summoning Rider Hunter Silva to cripple Meteor before inflicting the death blow and tells his crew that Kamen Rider Decade has already taken the lives of the Gorengers and some of the other Super Sentai teams. t their city’s Kazami district, the Go-Busters find people being attacked by various Kamen Rider monsters under Doktor G of the revived Dai-Shocker. Doktor G then introduces the Go-Busters to Dai Shocker’s Great Leader, Tsukasa Kadoya as he transforms into Decade to overpower them. But before he can finish them off, the Gokaigers save their successors and demand an explanation from Decade. However, Decade blames Marvelous for starting the fight before the Crisis Fortress appears overhead with Doktor G summoning Apollo Geist, the Bat Fangire, the Joker, General Jark, Neo Organism Doras, General Shadow, Llumu Qhimil, and the Arch Orphenoch to weaken the Gokaiger so Decade kills Luka, Ahim, and Gai as Joe and Don are forced to retreat.

Elsewhere, Brajira and various Goseiger monsters attack Kamen Rider OOO as the Double Births arrive to provide him back up before Silva arrives. Watching from afar, Marvelous encounters Daiki Kaito and reveals his goal to obtain the “Ultimate Treasure in the Universe” by killing all Kamen Riders. Taking out the two Births while fighting Kamen Rider Diend, Marvelous is about kill his opponent when OOO sacrifices himself to save the other Riders. Taking Hina and the Core Medals on her person to the Crisis Fortress, Kaito confronts Tsukasa after he gave his forces the order to go after the Goseigers. Kaito manages to take Tsukasa’s camera, refusing to support his friend as he and Hina are forced to retreat with Tiger-Roid and Komathunder sent after them as they run into Joe and Doc as they debate over their next course. At Hina’s behest, Kaito becomes Diend to wipe out the Dai-Shocker monsters. Learning that he is a Kamen Rider, despite stating he is on no one’s side in the conflict, Joe attempts to take out his frustrations on Kaito as he reveals what Marvelous’ intention while he spares Joe’s life upon beating him. From there, Don offers that they all join forces to solve what is truly going on with Marvelous and Tsukasa. Seeing that finding one of them is the only way to find answers, Kaito takes the others to Decade as he kills the Goseigers. Though they came only to talk, Joe is intent on fighting as Doras defeats him. However, Marvelous destroys the monster to save Joe and tells his first mate that this is for survival as only one group of heroes can exist. Telling Joe that Akarenger knows the true story, Marvelous tells him not to interfere as he confronts Tsukasa.

With their amassed armies ordered to stand back and watch, Marvelous and Tsukasa transform and do battle. With both Gokai Red and Decade evenly matched, the fight ends in a stalemate. Later that night, Joe attacks Kaito but lacks the will to kill him while admitting he does not want to see any more death. When they decide to find Akarenger, Joe points out that he is dead. Kaito decides to buy them a ride on the Den-Liner with the cup of pudding he stole from Momotaros during their last meeting. Arriving in the winter of 1976 to watch his battle with Baseball Mask, Akarenger reveals that he knows why they come and ask them to take him to their time as he is joined by the the Zyurangers, the Goggle V, the Megarangers, the Dekarangers, and the Livemen. But Kamen Rider 1 suddenly arrives with Kamen Riders Kuuga, Faiz, Kabuto, Kiva, and Double with a battle ensuing where only Akarenger and Kamen Rider Ichigo remain.

However, Akarenger and Kamen Rider Ichigo are revealed to be Gokai Red and Decade in disguise as both planned to flush out the remaining opposition and put an end. Mortified with Marvelous’s drive to sacrifice their own, a betrayed Joe engages his captain with Kaito protecting him before being knocked out by Decade. With both Kaito and Joe taken out, Gokai Red and Decade resume their epic battle have been before Doktor G and Silva arrive and reveal that Dai-Shocker and Dai-Zangyack have been playing them both in order to remove any opposition to combining their fortresses into Big Machine to take over the world. However, Marvelous and Tsukasa knew of the treachery and played along while sending those they seemingly defeated into a dimensional rift until the time to spring their trap arrived. Joined by the Gokaiger crew, OOO, and the real Akarenger and Kamen Rider 1 as they transform, Decade and Gokai Red are joined by Fourze, Meteor, the Go-Busters, and every other Kamen Rider and Super Sentai team to stand against the Shocker-Zangyack Alliance. However, as Go-Buster Oh is formed to fight the enlarged Warz and Ackdos while he and Gokaigers defeat General Shadow, Decade is horrified to find a revenge-driven Kaito as he forms Big Machine to teach everyone a lesson as the mecha kills Ackdos and Warz.

Entering Big Machine, Diend uses it on Go-Buster Oh with Fourze saving Yellow Buster. Given the Rocket Super-1 Switch and a new Astro Switch, Fourze takes over Yellow Buster’s place in piloting Go-Buster Oh as it engages Big Machine with the Super Rocket-1 Switch giving the giant robot the means to take their opponent into space. Back on Earth, the Gokaigers gain OOO Ranger Keys to take out Silva while Doktor G becomes Kani Laser to overpower the Kamen Riders before the Goseigers give Decade, Ryuki, and Blade their Tensou Cards to overpower the Destron monster prior to using their signature moves to finish him. However, Doktor G is revealed to be Narutaki as he leave while telling Decade that he will never stop until he is dead. Back in space, using Saturn’s gravity as a boost, Fourze install the Drill Switch Super-3 on Go-Buster Oh to destroy Big Machine. Soon after, as Eiji and Hina are reunited, the Gokai Galleon crew watch Fourze befriending the Go-Busters. Marvelous then joins up with his crew sees the ultimate treasure being friendship between the Kamen Riders and the Super Sentai teams while accepting Eiji’s friendship. As for Kaito, having survived the Big Machine’s destruction but badly injured, gives Tsukasa back his camera and tells him to find his own path before accepting Tsukasa’s (and Joe’s) friendship in his own way while leaving.